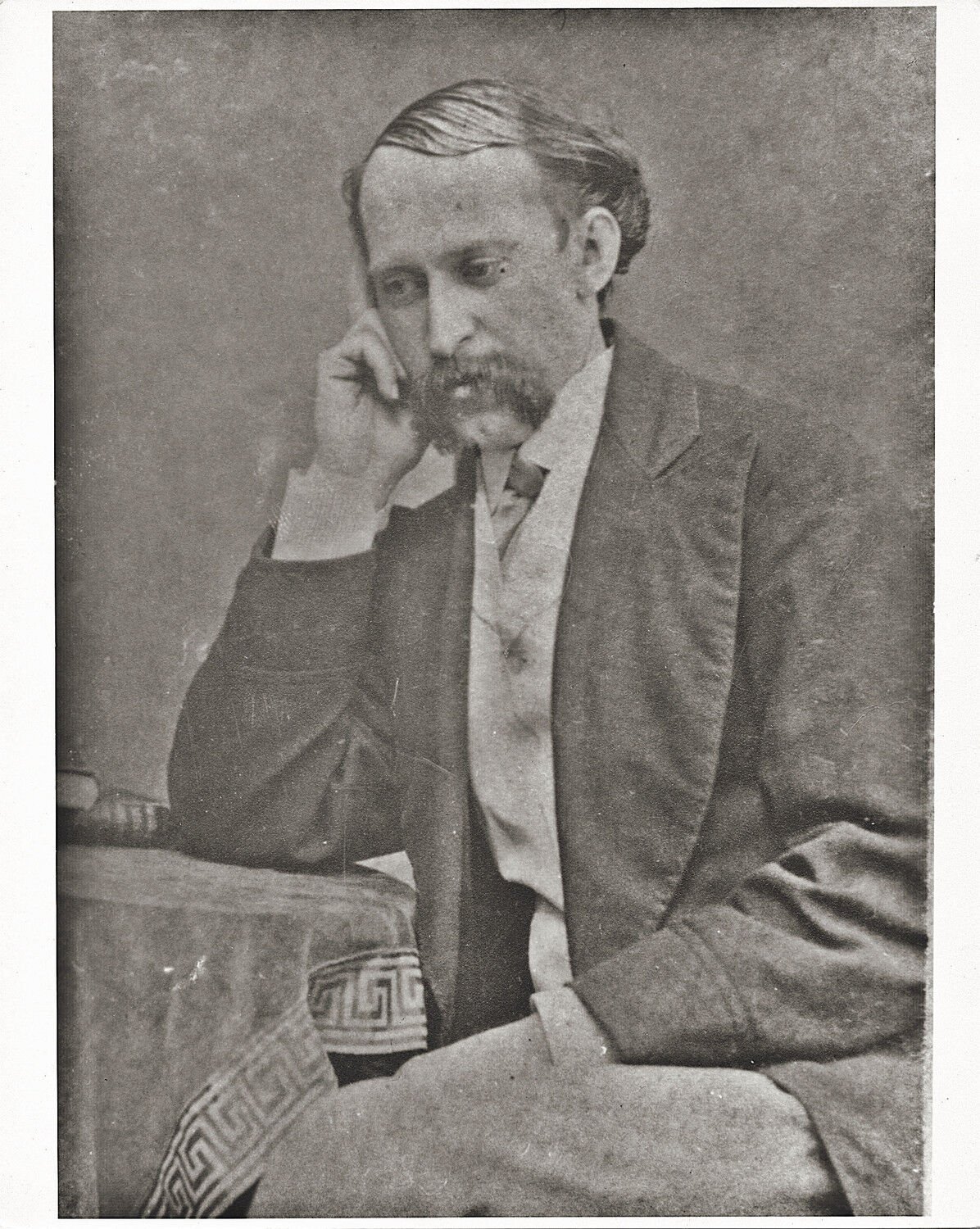 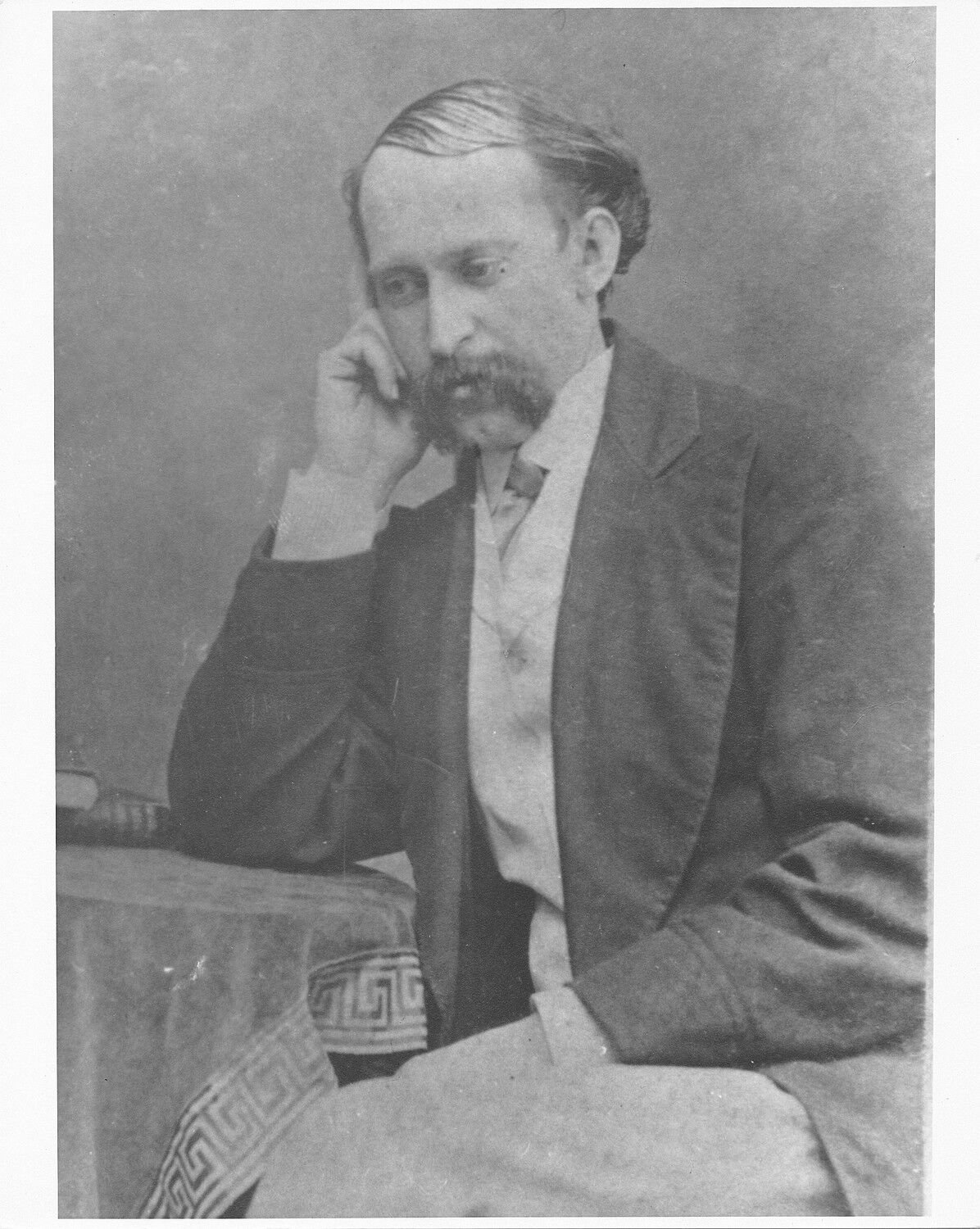 Editor's Note: This is the first in a three-part series on T.P. James, a spiritualist who claimed he was channeling the ghost of Charles Dickens.

BRATTLEBORO — Superstition has it that on Halloween, spirits of the dead come back to walk the earth. If true, T. P. James might choose to return to Brattleboro. This is where James claimed Charles Dickens' ghost dictated to him the ending to the unfinished novel "The Mystery of Edwin Drood." James published the completed novel in Brattleboro on Halloween, in 1873.

And if James's spirit was to come back to Brattleboro, the Market Block on Elliot Street, (the building which currently houses Taylor for Flowers and the Blueberry Haus Ice Cream parlor) might be a logical place to anticipate his return. James' book was first sold at E. J. Carpenter's store, which was in the center of the three shops housed on the first floor. James worked in the The Vermont Record and Farmer's print shop, which was in a narrow section towards the back of the building. The publishing office of the paper shared the second floor with apartments. Later in his career, James came to work as the co-editor and publisher of the Windham County Reformer, the forerunner of the Brattleboro Reformer.

Did James believe his own story, that he channeled Dickens' ghost? Or was he a gifted literary con-man? Dickens died in 1870 leaving millions of people, who had been reading Drood in installments, without an ending to his murder mystery. This presented an obvious opportunity for writers and publishers.

News that work was being done in Brattleboro to complete the novel came in a long sensational article printed in The Springfield Union in July of 1873. Long excerpts of this article were reprinted in newspapers across the country, and in Brattleboro's Record and Farmer, in August of 1873. A shorter excerpt followed in the Record's competitor, the Vermont Phoenix as well as a vigorously skeptical denouncement of it. An anonymous "special correspondent" for the Union, claimed that in 1872, a poorly educated mechanic, a "Mr. A," encountered Dickens' ghost at s ances held by his landlady, who owned a boarding house on Oak Street. During his first s ance, which he attended reluctantly, the table "waltzed exuberantly around the room, and finally tipped over into the mechanic's lap." At another s ance, the mechanic, who "had never written so much as a newspaper paragraph for publication", fell into a trance, took up pen and paper, and proceeded to write.

When he came out of the trance, according to the Union article, to his astonishment, there was a letter to Mr. A. signed by Charles Dickens, requesting an interview. During the private interview that followed in October of 1872, Dickens told him he had been selected to write down the ending to Drood. Furthermore, Dickens wanted to dictate more novels to him, and other stories, after they completed Drood. Dickens supposedly gave James permission to make money from the work. He also praised James's work." You have no idea how much interest this matter is exciting among the hosts by whom I am surrounded." Dickens supposedly informed James.

Following the publication of the article in the Springfield Union, James provided excerpts of the developing novel to newspapers, who published reviews of the book. Understandably, and as is common practice today, James only included the reviews that were favorable of his work in the broadside advertisement he created. That any of the reviews were at all favorable is testament to the fact that James could write at least passingly well.

However, some reviews were scathing. The New York Times reviewer wrote, "We cannot help being struck by ... the miserable incapacity of the spiritual Dickens ... It is now rendered quite clear that men's talents are not always improved when men die. It is grievous to think that Charles Dickens, who was once so justly famous, can now write nothing better than the concluding chapters of this saddening book."

Moreover, skeptical newspaper reporters tore into the Springfield Union's story of the poorly educated Mister A. It was revealed that the mysterious mechanic was a printer, with nearly 20 years' experience in his trade, who editors in New Hampshire and Massachusetts were familiar with as a former employee. It was also revealed that James was currently employed at Vermont Farmer and Record, in Brattleboro, the same paper in Brattleboro which re-printed the long excerpt of the Union's story about Dickens' "Spirit pen."

We know now, from the obituary of the editor of the Farmer and Record, Frank D. Cobleigh, that he was dying of tuberculosis at the time of this article's publication. In fact, he had moved from his home on Chase Street, to Elliot Street, and may have been living on the second floor of the Market Block, when he died. Tuberculosis in its final stages is debilitating, and it is conceivable that the editor was at least somewhat hampered in his ability to oversee the production of the newspaper. Could James have planted the article in the Farmer and Record, announcing his own discovery to the residents of Brattleboro? Or was Cobleigh aware the whole time of the identity of the mysterious Mr. A?

James was more than just an employee at the paper. James ran ads in the Record and Farmer offering his services as an independent printer of posters and cards, and Cobleigh accepted mail for James at the publishing offices at the Market Block. More damaging to the story than news of James employment at the Record and Famer, (and as noted by Andrew S. Kull in his seminal article on James in 1969 Vermont Life,) the very printing press that brought the story of the mysterious Mister A to the public's attention were the same printing presses that would produce James' Drood." Upon learning of this business partnership between James and the publisher of the Union, the editor of the Boston Herald wrote, "The charge has been openly made that the publishers of the newspaper which first gave

publicity to this story, are to publish this "medium's" production, if he ever finishes it, and their present eagerness to spread the story of the Brattleboro medium, is very likely a shrewd advertising dodge. This seems very probable. Recent developments show the developers of Dickens' work in a very unfavorable light, and cast great doubt upon any of the stories, he, or his future publishers, (at the Springfield Union) have to tell."

It is possible that there may have been no-land lady on Oak Street, no s ance, and no special correspondent, other than James himself. If true, the "mechanic who had never written a paragraph for publication" was in fact a plucky word smith, at least when it came to writing publicity for a book.

The scathing newspaper articles also revealed that when James moved to Brattleboro in 1870 or 1871, he introduced the women he travelled with to townspeople as his wife. This unfortunately was a lie, which further damaged his credibility. James had not married his companion, Martha Adaline Hill, and he had not obtained a divorce from Elizabeth Scott. According to census reports and her wedding certificate, Hill was a teenager when she left her family in Irasburg to work in a textile mill in New Hampshire like many other Vermont farm girls in the late 1860s. She worked in the Jackson Mill in Nashua, took a room in Elizabeth James' boarding house, and met Scott's husband, Thomas. He had worked as a printer in Portland, Maine, Philadelphia, Ogdensburg, New York, and New York City, before running a failed printing business in Lowell, Mass., with his stepson. According to the newspaper accounts, "there was an explosion" when his affair with Hill was discovered. The lovers fled Nashua, N.H., around 1870, and married in September 1873, in Brattleboro, after James' desertion of his former wife was made known by inquiring newspapers.

The Nashua Telegraph also revealed that James had a brush with literary plagiarism as a youth. He supposedly sold copies of a play he claimed to have written, which turned out to be a famous playwright. The editor of the Telegraph for whom James had worked, wrote, "Still, we must give him credit for considerable ingenuity, as the imposition he has attempted is one of the cleverest in conception and execution in modern times. And we shall not be surprised if he attempts with his infinite assurance to bluff it through."

While the newspapers in New Hampshire, which James had worked at, were especially scornful, the co-editors of the Phoenix, Olin French and Daniel Stedman, who also knew James, were

relatively charitable. "We understand that the newspapers (that reported on all of the scandals) will not be sued for libel by Mr. James," they wrote. "It is due him, however, to state that persons who have known him during the last two years that he has been a resident of Brattleboro, are not disposed to give full credit to (newspaper accounts of his past.) His conduct while here, as well as that of the person who purports to be his wife, has been above suspicion. Of course, the facts of his past life, or his present conduct, have no direct bearing upon the character of the work with which he is engaged, further than to throw suspicion upon its origin. His book will be judged upon its own merits. We learn that he is about to leave the employ of Mr. Cobleigh for the purpose of the work in hand."

None of the scandals stopped James from completing his plan. After disappearing with Martha Hill, he reappeared when he had completed the novel. The Phoenix acknowledged that James

published the work in late October, and declared "(the book) makes a fine volume of about 500 pages. It is having a large sale."

James would later claim that he had sold over 30,000 copies. Whether this is another piece of fiction cannot be ascertained, but copies are found in libraries across the country, including one in the Brooks Memorial Library, that appears to be signed by Dickens himself.

An exhibit featuring portraits of T. P. James and other important figures in Brattleboro's printing and publishing history is at the Brooks Memorial Library. It is funded by a NEH Creating Humanities Communities Grant. For more information about the grant visit http://www.brattleboro.com/words. A presentation on how to do research and write stories on people from Brattleboro's past, including T. P. James, will be held at the Brooks Memorial Library on Nov. 29.

Part 2 of Rolf Parker's investigation into the life of T.P. James will appear in Monday's Reformer and Part 3 will appear on Tuesday, which is Halloween.