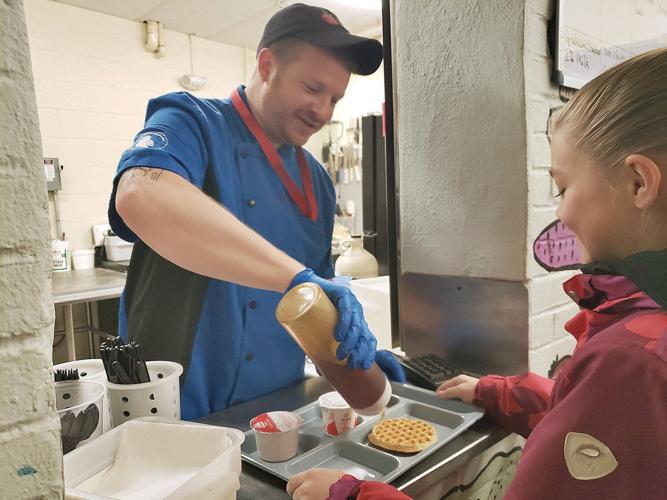 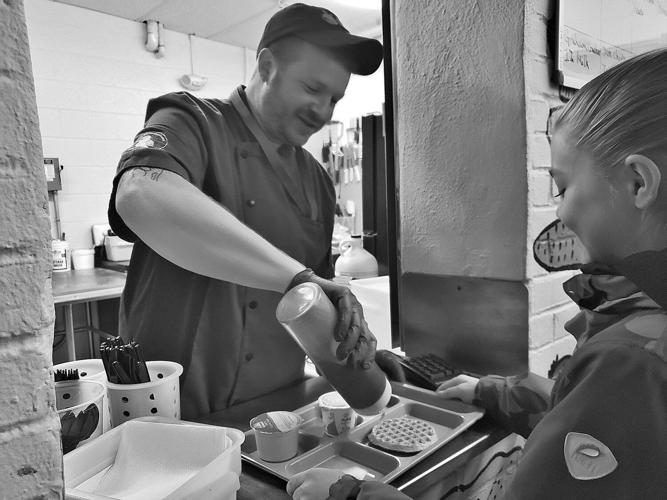 "We don't need to be piling garbage on top of their trays," the food service manager at NewBrook said. "We need to be feeding them nourishing food."

Parker, who will become food service director at Windham Central Supervisory Union on July 1, pushed for expanding the program from NewBrook to all schools within the West River Modified Union Education District.

Universal meals allow schools to build the program into their overall curriculum, "creating a learning lab for healthy eating and a mealtime experience where every kid is equal and enjoys their meals together," according to Hunger Free Vermont, which says nearly a quarter of schools in the state offer them and studies show that the programs "increase participation, leading to better student health and learning, and a strong school meals business. When participation is up, school meal programs have more resources to invest in even higher quality food, including many local foods."

Like NewBrook, WRMUED would offer the meals via Provision 2, which allows schools to serve all meals at no charge for a four-year period.

NewBrook is in its first year. After three more years, the state can approve four-year extensions if the income level of the school's population remains stable.

"Schools electing this alternative must pay the difference between federal reimbursement and the cost of providing all meals at no charge," according to the U.S. Department of Agriculture Food and Nutrition Service. "The money to pay for this difference must be from sources other than federal funds."

Parker said 52 percent of NewBrook's students are eligible for free and reduced meals so the federal reimbursement outweighed the contribution needed from families paying for the food. But since the school now offers meals through Provision 2, it has seen a 20 percent increase in participation.

"That is breakfast and lunch," Parker said. "And I'm fairly certain we would see a 35 percent increase for all of our schools — Jamaica, Townshend, Leland & Gray, NewBrook — and then Wardsboro buys into our meal program."

WRMUED budgeted $50,000 for what Parker considers "the worst case scenario," meaning participation stays level. A potential $6,000 deficit at NewBrook had been wiped away after an increase in students eating the meals and donations from monthly community lunches.

"Given those numbers in NewBrook," Parker said, "I'm confident it will look very similar to the district."

Ultimately, the goal is to incorporate more farm-to-school programming in each school building. Parker said he plans to work with institutions such as Kindle Farm and do more buying locally through places like Dutton Berry Farm.

About 400 pounds of produce had been grown in gardens revitalized last year at NewBrook. That showed the children how food goes from "seed to lunch tray" and turned them into advocates for veggies, Parker said.

Part of the increase in participation at NewBrook is attributed to eliminating stigma. Parker said that previously, students might have looked at classmates eating breakfast at the school as coming from "poor" families as they were missing out on time they could spend playing with friends.

Now, any child is welcome to the meal.

"So they don't feel like they're separated from their friends," Parker said. "So if we're offering to everyone, we're getting rid of that stigma but we're also improving what the students are eating — making better quality scratch-made food and just making it an inviting environment."

Parker questioned why schools provide textbooks, and gym and recess equipment but not food when he said it energizes students' brains, lessens visits to the nurse and leads to higher attendance rates. And when a family at NewBrook would pay $155 per student per month for meals, having the extra funds available for the family might make the difference between paying a car or heat bill.

"Vermont has an extremely high cost of living," Parker said. "If we can take one thing out ... everyone's happier."

If the fiscal year 2020 budget is approved by voters on March 27, WRMUED schools would join NewBrook in having self-operated kitchens rather than contracting with food service companies. It "gives us the ability to be more personally involved with the students," said Parker, meaning kitchen staff will become better acquainted with allergies, medical issues and personal taste.

L&G will be used for production. Things like burger patties and muffins will be made there from scratch then shipped to the other schools, where they will be prepared.

Each day, k-12 students will be eating items from the same menu. And Parker hopes to make an additional 10 meals a day to send home with children on Fridays.

L&G already has a food shelf for students to take items for after-school hours.

"Anything we can do to make sure these kids are not struggling over vacations, over weekends," Parker said. "No kid should have to worry where their next meal is coming."