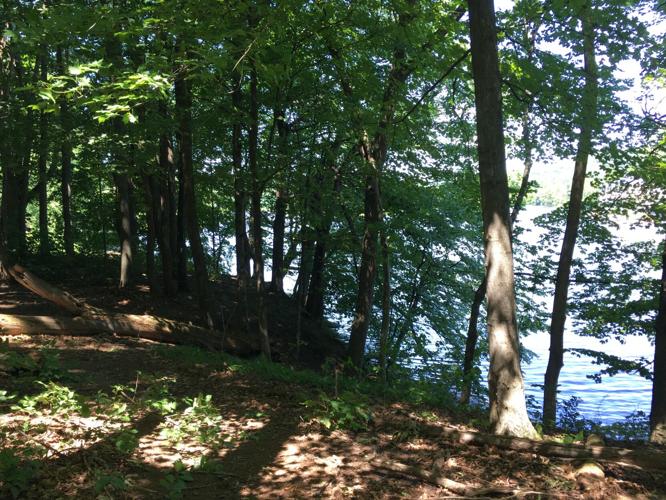 A fundraising campaign seeks to purchase and preserve land in Brattleboro held sacred by Indigenous People. 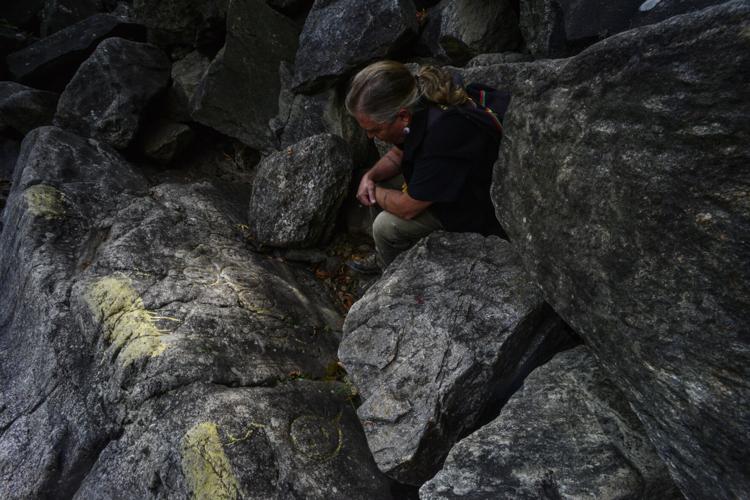 Rich Holschuh sits while looking at one of the two Bellows Falls petroglyph sites.

A fundraising campaign seeks to purchase and preserve land in Brattleboro held sacred by Indigenous People.

Rich Holschuh sits while looking at one of the two Bellows Falls petroglyph sites.

BELLOWS FALLS — People are increasingly recognizing the history and culture of Indigenous people, Elnu Abenaki leaders said Thursday at a celebration of a National Park Service grant that will allow Rockingham and an Abenaki organization to re-evaluate the importance of the petroglyphs at Kchi Pontegok, or The Great Falls.

Rich Holschuh of Brattleboro, director of the Atowi Project who will be co-director of the petroglyph study, told the gathering that earlier that day he had been able to make a $325,000 bid on two acres of land in Brattleboro that is sacred to the Abenaki, thanks to strong fundraising and a recognition of the importance to the region’s multi-cultural history. He said he had been able to raise $170,000 in one week toward the purchase.

Earlier this year, the Rockingham Historic Commission and the Elnu Abenaki Tribe applied for the federal grant for under-represented communities to study and re-evaluate the Bellows Falls petroglyphs in their cultural context. It was the first time an organization in Vermont received such a grant.

Holschuh told the 70 people gathered Thursday evening at the Great Falls Park on Mill Street, overlooking the Connecticut River, that he had received two $50,000 donations in recent days to support the purchase of the Brattleboro land. He said the Vermont Land Trust had promised to provide bridge financing for the purchase price until fundraising can be completed.

At the same time, Holschuh and Elnu Abenaki Chief Roger Longtoe Sheehan said that negotiations were continuing with Great River Hydro, which owns the land where the Bellows Falls petroglyphs are located, as part of the Federal Energy Regulatory Commission’s relicensing of the hydro facility.

The petroglyphs are just downstream from the Vilas Bridge.

The Bellows Falls petroglyphs are badly damaged, said Longtoe Sheehan, due to misguided re-carving of the 3,000-year-old petroglyphs, as well as painting them with fluorescent paint, and bridge construction in the area of The Great Falls, as Bellows Falls was known. It was a place for spirits, he said.

Holschuh read two letters sent to the Rockingham Historic Commission and the Elnu Abenaki from Vermont Sens. Patrick Leahy and Sen. Bernie Sanders,about the special National Park Service grant, and the mission of the study to put the Indigenous sacred symbols into context.

“While the main purpose of this grant is to fund the Petroglyph project, its impacts are much broader. It recognizes that, for decades, the Elnu Abenaki have been underserved, overlooked, and underrepresented. Thanks to your efforts, the project will protect generations of culture. We need to continue the growing movement of understanding the complexity and relevancy of Indigenous people, and preserving their values and rich history,” Sanders wrote.

Holschuh said he hoped the bid, which was $5,000 above the asking price, would be accepted by the seller, but he was cautious, citing the hot real estate market. The seller has four days to accept his bid, he said.

The two acres could have been turned into more than a dozen building lots, Holschuh said, anathema to the sacredness of the site.

The land, which is on the banks of the West River and near the mouth of the Connecticut River, is believed to be a site of Indigenous burials and is close to the recently re-discovered Indigenous petroglyphs, which have been under water ever since the the construction of the hydro-electric dam in Vernon.

“You don’t care about what you don’t know about,” he said.

The carvings, said project co-director and archeologist Gail Golec of Walpole, N.H., are “not just rocks in a waterfall.” The study will help people understand the importance of the carvings, said Rockingham Town Manager Scott Pickup.

“Sometimes we don’t always see what’s in front of our face,” he said.