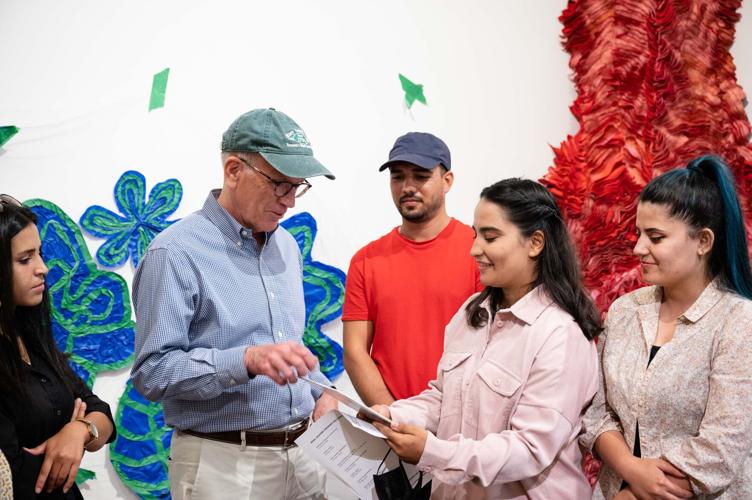 Neghina, of the Art Lords Collective, presents Congressman Peter Welch with a drawing to show her gratitude for the work he's done on behalf of the Afghan refugees. Pictured left to right: Zuhra, Welch, Abdulah, Neghina and Meetra. 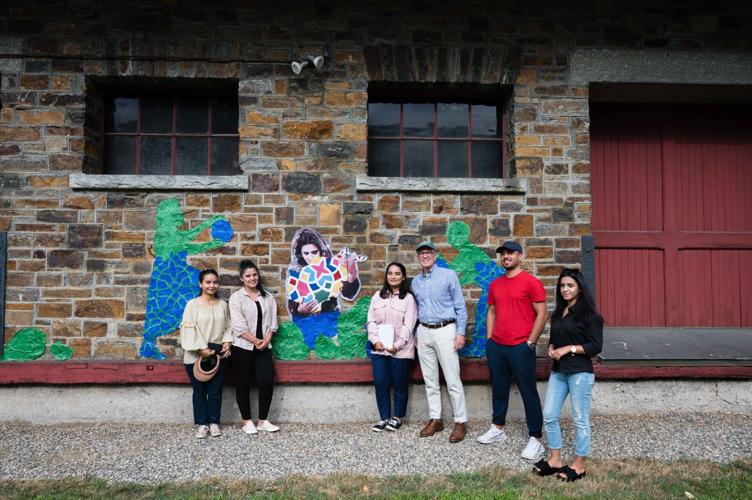 U.S. Rep. Peter Welch, D-Vt., meets with members of the Art Lords muralists collective and views one of the murals constructed by them and tape artists Leah Smith and Michael Townshend at the Brattleboro Museum and Art Center on Saturday. The mural project, called 'Honoring Honar' includes 17 temporary murals around Brattleboro honoring ArtLords murals that were destroyed by the Taliban in Afghanistan. Pictured left to right: Marwa, Meetra, Neghina, Welch, Abdulah and Zuhra. 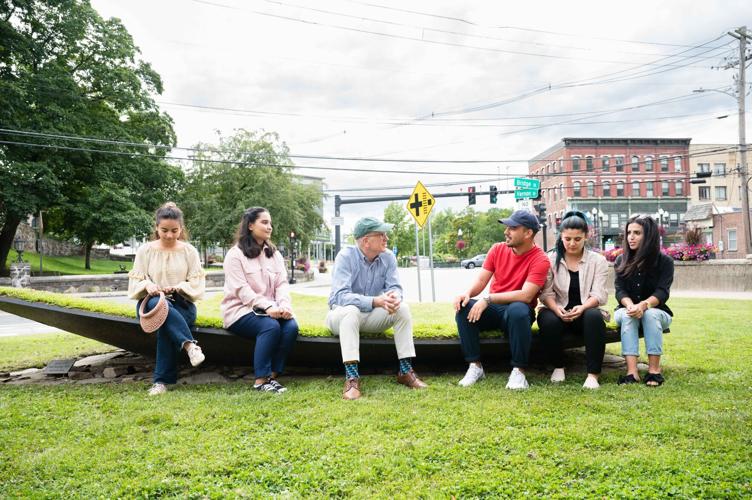 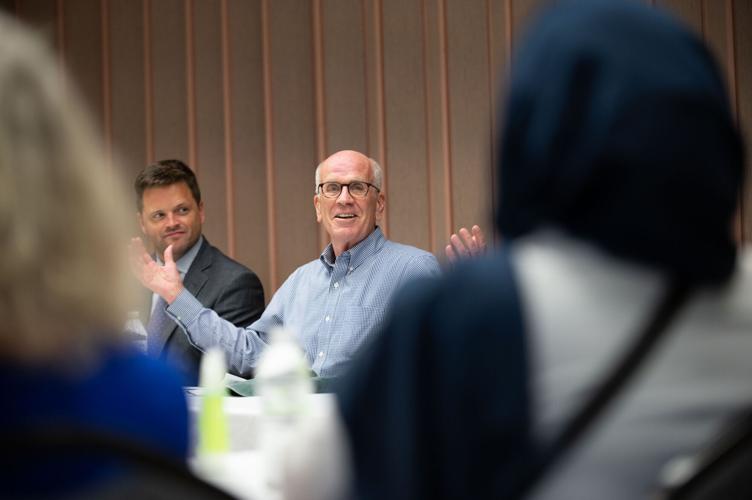 Neghina, of the Art Lords Collective, presents Congressman Peter Welch with a drawing to show her gratitude for the work he's done on behalf of the Afghan refugees. Pictured left to right: Zuhra, Welch, Abdulah, Neghina and Meetra.

U.S. Rep. Peter Welch, D-Vt., meets with members of the Art Lords muralists collective and views one of the murals constructed by them and tape artists Leah Smith and Michael Townshend at the Brattleboro Museum and Art Center on Saturday. The mural project, called 'Honoring Honar' includes 17 temporary murals around Brattleboro honoring ArtLords murals that were destroyed by the Taliban in Afghanistan. Pictured left to right: Marwa, Meetra, Neghina, Welch, Abdulah and Zuhra.

BRATTLEBORO — Of the more than 100 Afghan refugees who landed in Brattleboro, five of them were members of the Art Lords, a 50-person collective of artists founded in 2014 that was responsible for more than 2,000 blastwall murals in 19 of Afghanistan’s 34 provinces.

On the day the Taliban took full control of the country, Aug. 15, 2021, one of the first things they did was paint over the murals.

According to Negina, one of the Art Lords to find themselves in Brattleboro, the first mural the Taliban destroyed was the first one she had helped to create.

“The suppression of women was one of the many challenges we were addressing in our art,” she said. “We showed our support by painting pictures of prominent Afghan women, including the members of Zohra, Afghanistan’s first women’s orchestra. It was my first mural project and the biggest achievement of my life.”

When that mural was whitewashed by the Taliban, “It confirmed what we already knew — that our art was very powerful and represented a real threat to the Taliban and their noxious ideas.”

The five members of the ArtLords in Brattleboro — Negina and Marwa, Meetra, Zuhra and Abdul — have been creating in Brattleboro tape art homages to their murals destroyed by the Taliban, a project called “Honoring Honar” — honar being the Dari word for art.

The project is a collaboration with the Tape Art crew from Providence, R.I., a group of people who design and create temporary murals using tape.

“All of their work was destroyed the first day the Taliban came in,” said Michael Townsend, a member of the Tape Art team, who said tape art is ephemeral, compared to the permanent work the Art Lords were doing on big blast walls in Afghanistan. “The difference is I choose to take my work down. In this case, the regime came in and took it from them. So this is a really awesome opportunity for them to be in a new town and have a sense of power over these walls.”

The Tape Art crew came to Brattleboro at the invitation of the Brattleboro Museum and Art Center.

“There was sort of a general interest in connecting with this museum and making something happen,” said Townsend.

Leah Smith, who has been a Tape Art member for about a decade, said when they heard members of the Art Lords were in town, they thought it would be a great idea to work with them.

“We thought it would be a real shame to have a new crew of muralists in the city and not be able to do something together,” said Smith. “They’ve been great jumping in on a medium that they don’t use, ever. It’s been really great having five people here who are down to just sort of jump in, try a new medium, make it work and that’s going out in the public on first try.”

Smith said what they were doing is a real example of how art can connect cultures.

“The tape is giving, even if just temporarily, a voice and visibility to things that would be unseen otherwise,” she said.

“As muralists, they think big and are use to executing quickly, making magic out of thin air,” said Townsend, who described Brattleboro as “a thumbs up type of community” where people are positively engaged with art and each other.

“It the perfect way to them to start their art journey here,” he said, adding that working with the Art Lords was a reminder “of how this medium does such an excellent job of getting people to sort of dream big, dream quickly and have freedom.”

He said he hopes to put up more art around town because he has heard from a lot of people who think there are too many blank walls in Brattleboro.

In Vermont, said Negina, they found a home, not just for themselves, but also for their art.

“We will stay here and continue our art,” she said.

She hopes to paint permanent murals around town.

“But our first step is working with tape art.”

The murals are on display throughout downtown Brattleboro through Aug. 28. A map of all 20 murals is available at the museum and elsewhere around town, with QR codes linked to images of the original murals in Afghanistan.

“I’m hoping that this project will get more attention for the Art Lords and lead to more permanent murals,” said Kirsten Swartz, the museum’s manager of education and community engagement programs.

“The opportunity to put artwork up outside our walls and around town, I just wish we could do that all the time,” said Danny Lichtenfeld, BMAC’s executive director.

“Your art is powerful,” said U.S. Rep. Peter Welch, D-Vt., during a Saturday visit to the museum. Earlier in the day, Welch had participated in a marker ceremony celebrating the connection between SIT Graduate Institute and the Peace Corps before meeting with Afghan refugees.

Welch said the five artists were lucky to land in a town that is accepting, warm and not just a little bohemian.

“But there’s also a capacity to create structures where people can express themselves. And that’s a community effort. That’s suspending your radical individualism enough to create a radical community and structures that allow people to grow and develop and contribute.”