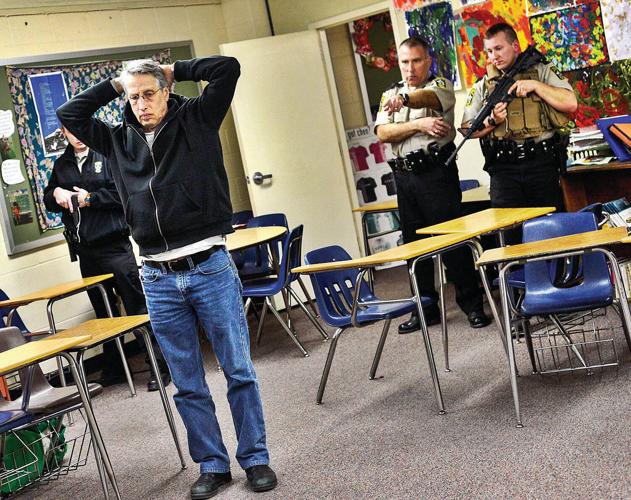 Windham County Sheriff's Deputy First Class Mike Roj talks with Deputy Ian Tuttle about their approach when they faced a "janitor" during a training scenario on Monday, March 19, 2018. 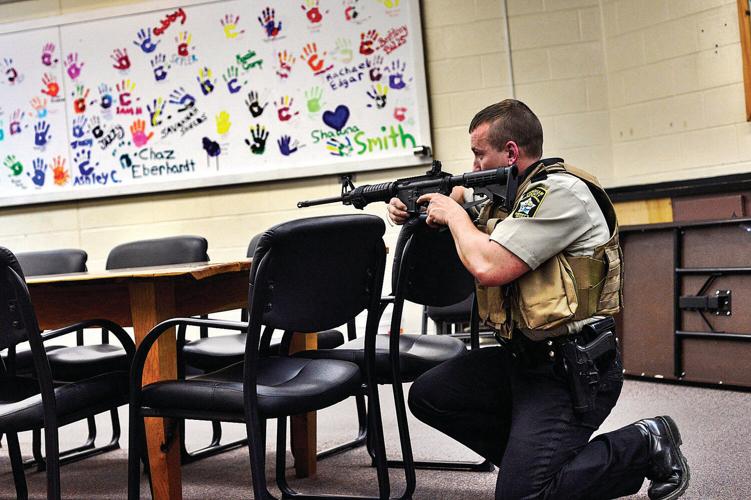 During a training scenario on Monday, Windham County Sheriff's Deputy First Class Ian Tuttle crouches near a table while holding his rifle to cover his partner as they search a room at Leland & Gray Union Middle and High School. 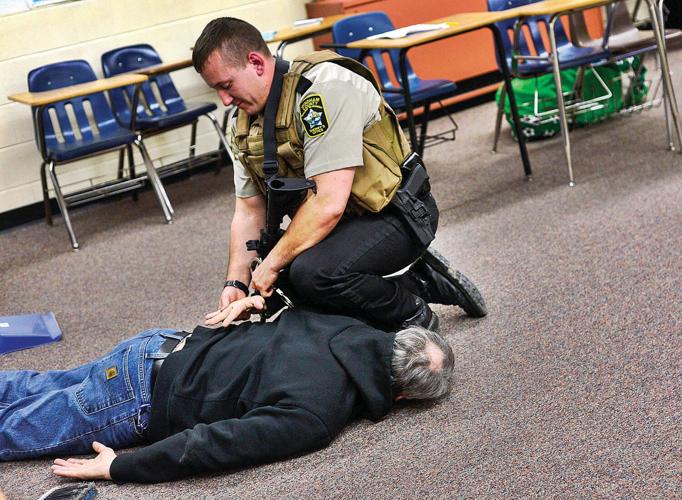 Windham County Sheriff's Deputy First Class Mike Roj talks with Deputy Ian Tuttle about their approach when they faced a "janitor" during a training scenario on Monday, March 19, 2018.

During a training scenario on Monday, Windham County Sheriff's Deputy First Class Ian Tuttle crouches near a table while holding his rifle to cover his partner as they search a room at Leland & Gray Union Middle and High School.

BRATTLEBORO — When it comes to emergency response planning, schools in Windham County might have a leg up compared with other schools in Vermont.

"You have folks who are proficient in the language of crisis response," said Vermont School Safety Liaison Officer Rob Evans, who works for the Agency of Education and the Department of Public Safety. "The planning associated with Vermont Yankee, the connections, the systems and the collaborations between local emergency management directors and public safety partners — those are already established."

Evans, who now works for Burlington-based Margolis Healy, a professional services firm specializing in campus safety and security, retired from the Vermont State Police in 2013.

As safety liaison officer, he is responsible for coordinating school crisis preparedness and planning for more than 300 public, private and independent schools.

Before his retirement, Evans was the statewide law enforcement coordinator for Vermont Emergency Management responsible for directing law enforcement and security operations during man-made or natural disasters.

"Windham County's first responders and crisis responders know the language and processes and they can apply that to school emergency preparedness and procedures," Evans told the Reformer.

Evans has been busy the past few days in response to Gov. Phil Scott's order requiring law enforcement agencies to meet with state school officials to discuss emergency response and to conduct school safety site assessments. Scott's order is in response to the mass shooting at a school in Parkland, Fla., that killed 17 people.

From 1972 through December 2014, while Vermont Yankee nuclear power plant was in operation in Vernon, the state, emergency responders, the Vermont & The New Hampshire Upper Valley chapter of the American Red Cross and local law enforcement practiced on a regular basis to respond to any emergency at the plant. Schools were an integral part in the planning, either to insure a safe and secure evacuation or to serve as relocation centers.

The analysis is meant to "guide the state's comprehensive approach to reducing the risk of violence in communities and schools."

"Obviously, after Parkland and the Fair Haven [Vermont] incident, it's a good time to check and determine what we are doing well and to identify areas that need additional attention for future training and funding," said Evans.

On Feb. 15, Jack Sawyer, 18, of Poultney, was arrested after police learned he was planning a mass shooting at the Fair Haven school he attended before he was sent to a treatment center for teens with emotional and behavioral disorders. Sawyer is being held on four felony charges, including attempted aggravated murder and attempted assault with a deadly weapon.

Fair Haven Police Chief William Humphries told the media his department received a call from police in the state of New York that Sawyer had made a threat against his former school.

"I applaud Governor Scott for getting these assessments done and making them a priority," said Evans, who has been working on school safety since 1999.

"We have really been working on an all-hazard crisis response for schools, not just a response to a violent intruder," noted Evans. "Anything can take place — a boiler can go bad, filling the school with fumes, a child with a peanut allergy has a reaction or a high school athletic director has a heart attack. All these kinds of things can happen and schools have to be prepared to handle them."

Evans acknowledged that a school shooting is a horrible thing to contemplate and to prepare for, but he said schools need to be just as or even more prepared for what he called "a high-probability event" such as a bus full of school kids running off the road or school administrators having to deal with a disgruntled parent or a troubled employee.

"A violent intruder is a high-impact, low-probability event," he said. "While the chances of that happening are slim, if it was to take place, the consequences are obviously devastating. But we need to keep this in perspective. Schools are still some of the safest places for our kids to be. There are lots of folks across the state and country who are spending a tremendous amount of time, effort and research to make sure we are applying the best practices to make sure schools stay that way."

In Brattleboro, the local police department already has a close working relationship with the schools of the Windham Southeast Supervisory Union, said Capt. Mark Carignan, of the Brattleboro Police Department.

"We are very glad to see that there is a statewide effort to coordinate safety efforts in and around schools, but frankly, this is something we've been doing for years," he told the Reformer. "All of the information contained in the survey refer to data points and plans that the district and first responders have already established."

Lt. Jessica Fellows, of the Windham County Sheriff's Office, said they recently conducted a lock-down drill and safety assessment at a local school. She acknowledged that local emergency responders do have an advantage because of preparedness routines established during the operation of Vermont Yankee.

"We all communicate pretty well, even with the volunteer agencies," said Fellows.

Nonetheless, she also acknowledged that these drills and emergency preparations have an effect on students, especially those in grade school.

"The first time my daughter went through a drill she came home pretty upset," she said. "But kids are really resilient. We've talked with the students and told them why we do these drills. It's good and bad, but it's become a normal safety mechanism."

"We had a meeting with police last week," said Chris Kibbe, the superintendent of Windham Northeast Supervisory Union. "It was one of our semi-regular meetings where we talk about school safety."

In response to the governor's directive, Kibbe will soon be meeting again will police.

"We are happy to conduct an additional review," he said. "We are always working on our plans."

Kibbe said WNESU's work with Evans, while cognizant of preparing for a violent intruder, focuses more on "mundane" events.

"Though it's not mundane if you're kid is involved," he said, which is why schools need to be prepared for both low-probability and high-probability events. "Plan for the stuff you can plan for and have protocols in place for those things."

Also important for school administrators and teachers is "to make sure the kids are connected and that they are not being harassed or bullied," said Kibbe. "I believe our schools do a pretty good job of connecting with the kids."

The Brattleboro Reformer is hosting "A Forum on Gun Violence," on Friday night starting at 6 in the in the Multi Purpose Room at Brattleboro Union High School.

Greg Sukiennik, New England Newspapers Vermont Managing Editor, will moderate the event, which will include a panel made up of Lyle Holiday, superintendent of WSESU; Steve Perrin, principal at BUHS; Mark Carignan; Louis Josephson, CEO of the Brattleboro Retreat; Bob Thibault, principal at Leland and Gray Union Middle High School; Brian Patno, CMA at Just So Pediatrics; William Anton, superintendent of WCSU; and several local students. The event is free and open to the public.

To learn more about the Scott Administration's work to enhance the safety of Vermont schools and communities, visit http://governor.vermont.gov/press-release/governor-phil-scott-delivers-action-plan-maintaining-safest-healthiest-and-strongest.