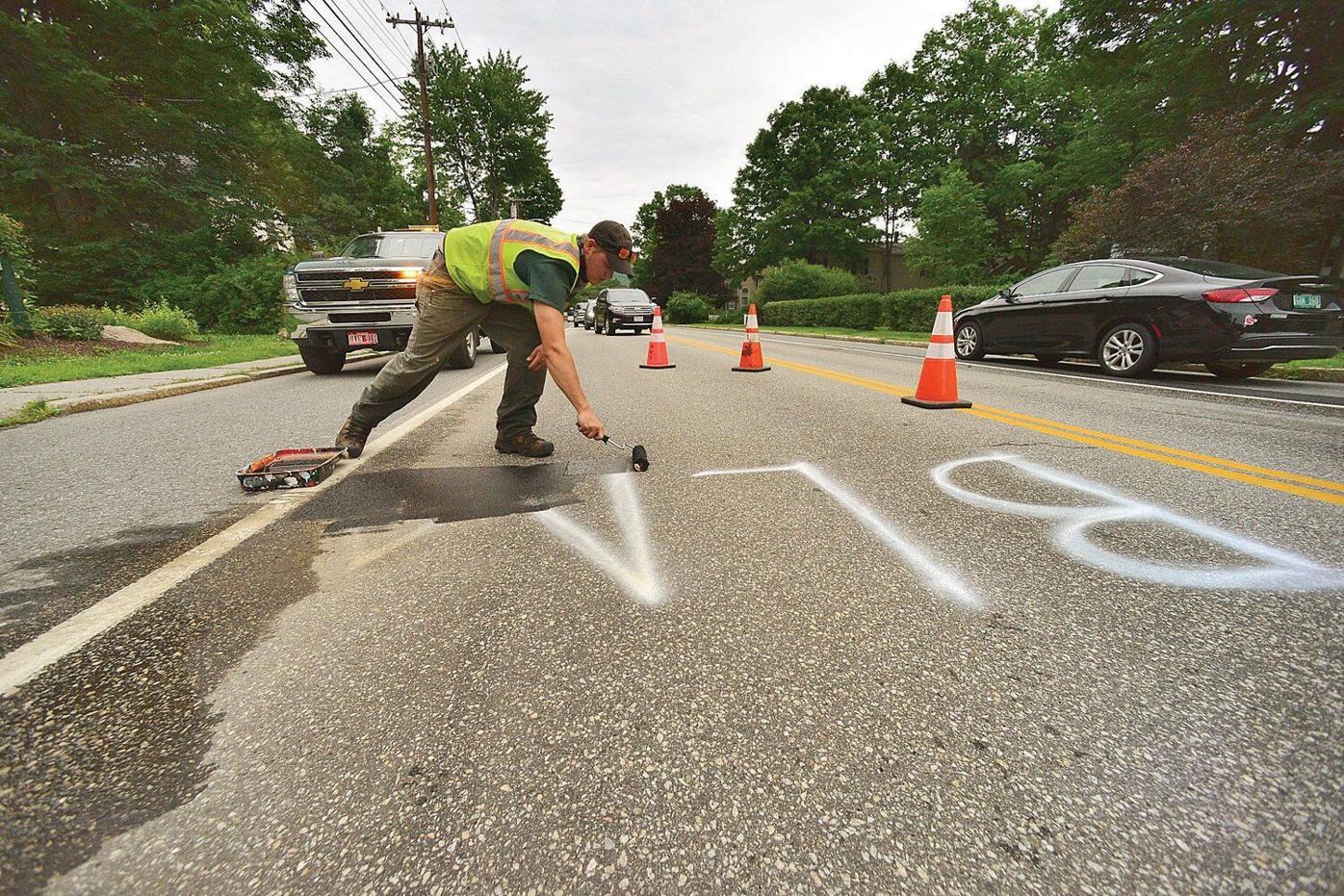 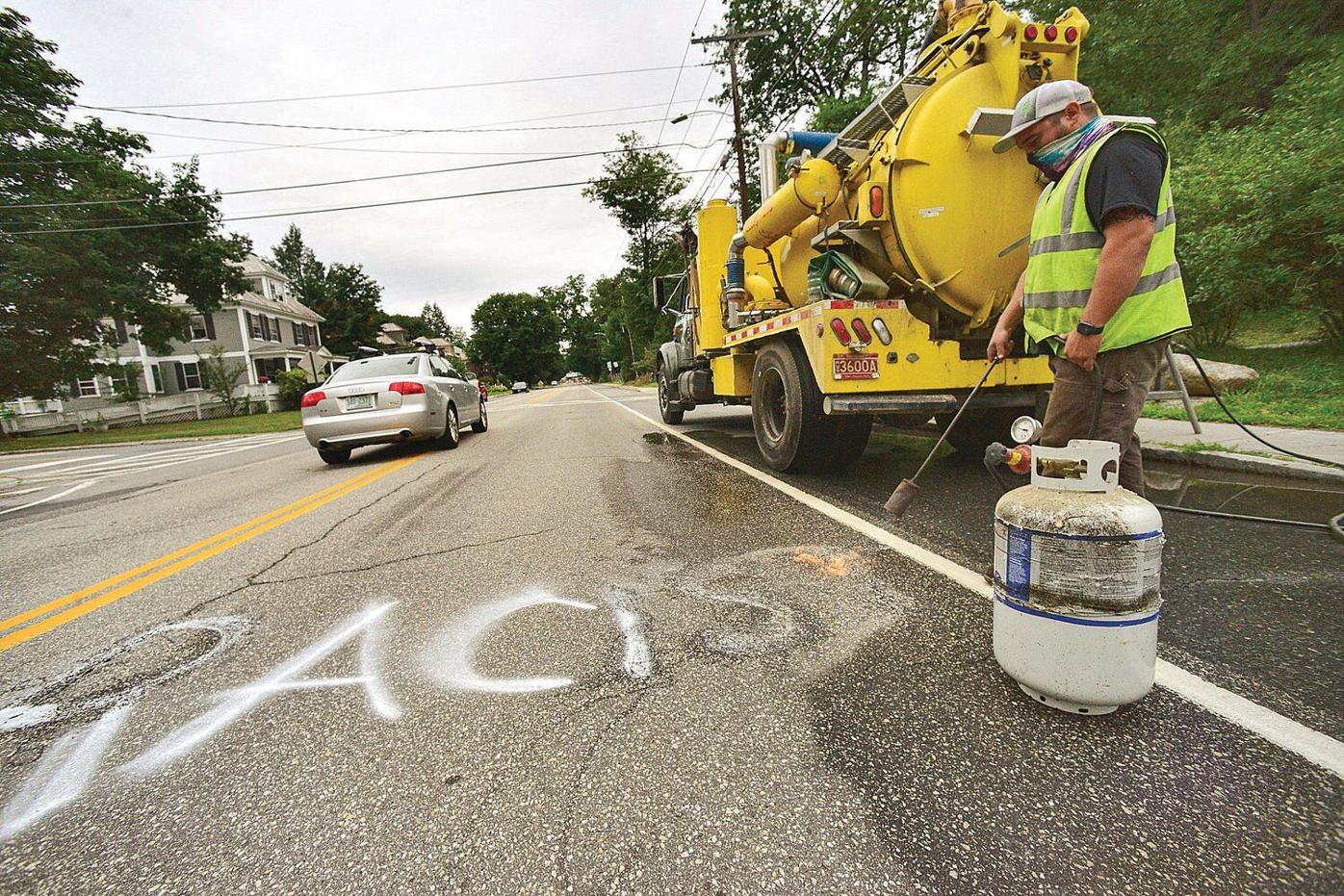 Brattleboro Public Works Department employee Scott Johnson uses a blowtorch to dry an area of Western Avenue, in Brattleboro, as workers paint over "BLM is Racist" graffiti on Wednesday. 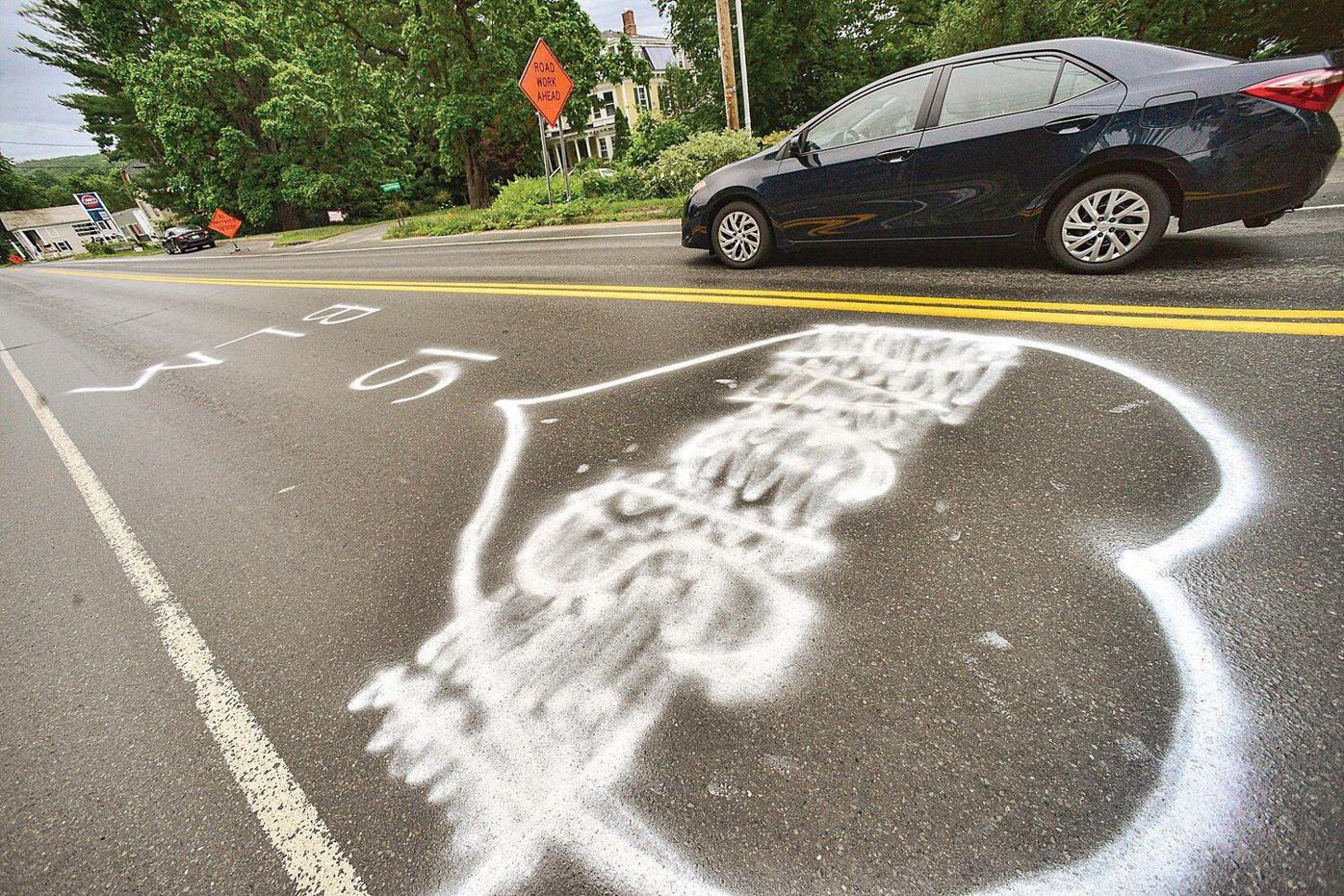 A heart trying to cover up the word racist on Route 5, in Putney, Vt., after someone spray-painted "BLM is Racist" on Wednesday. 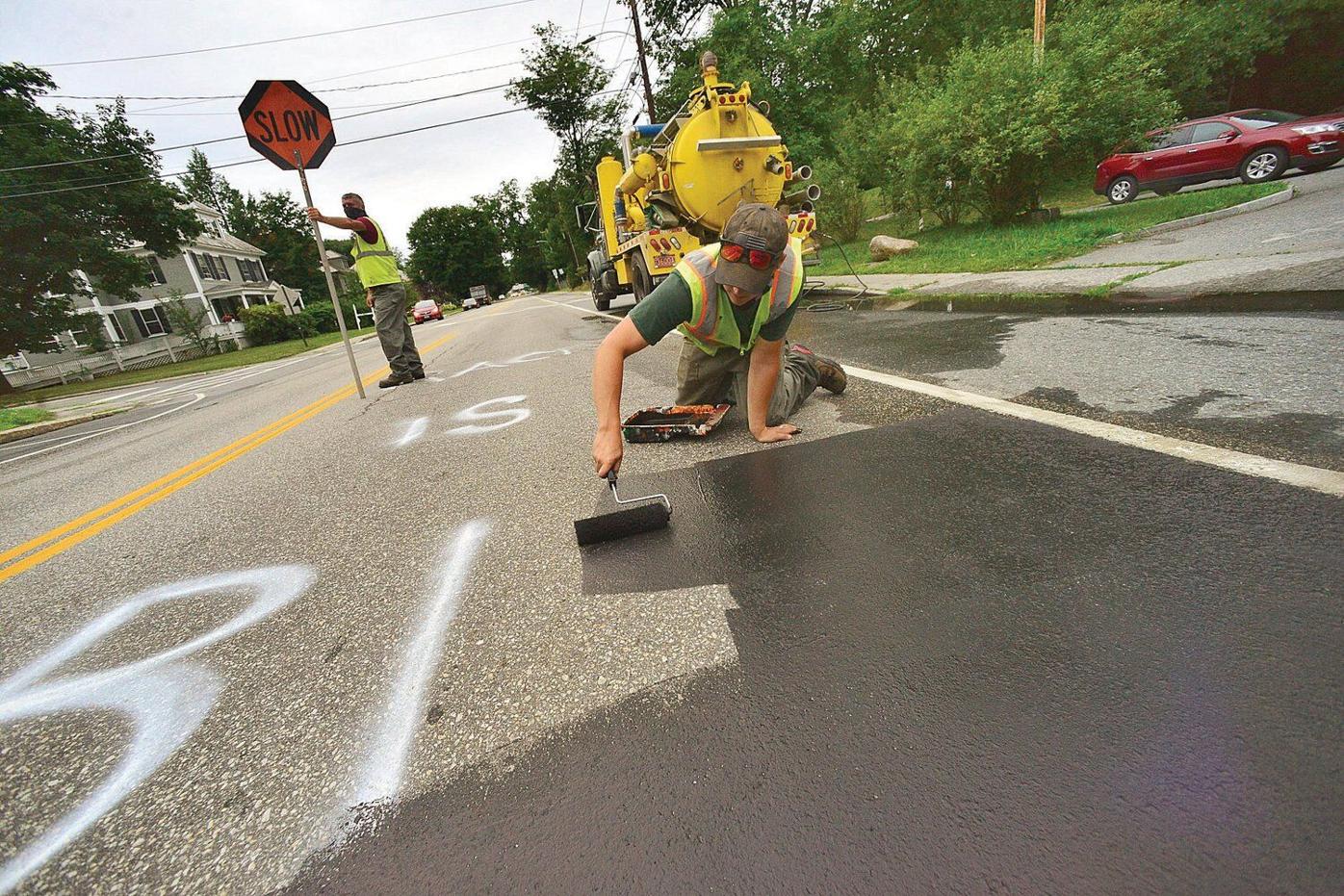 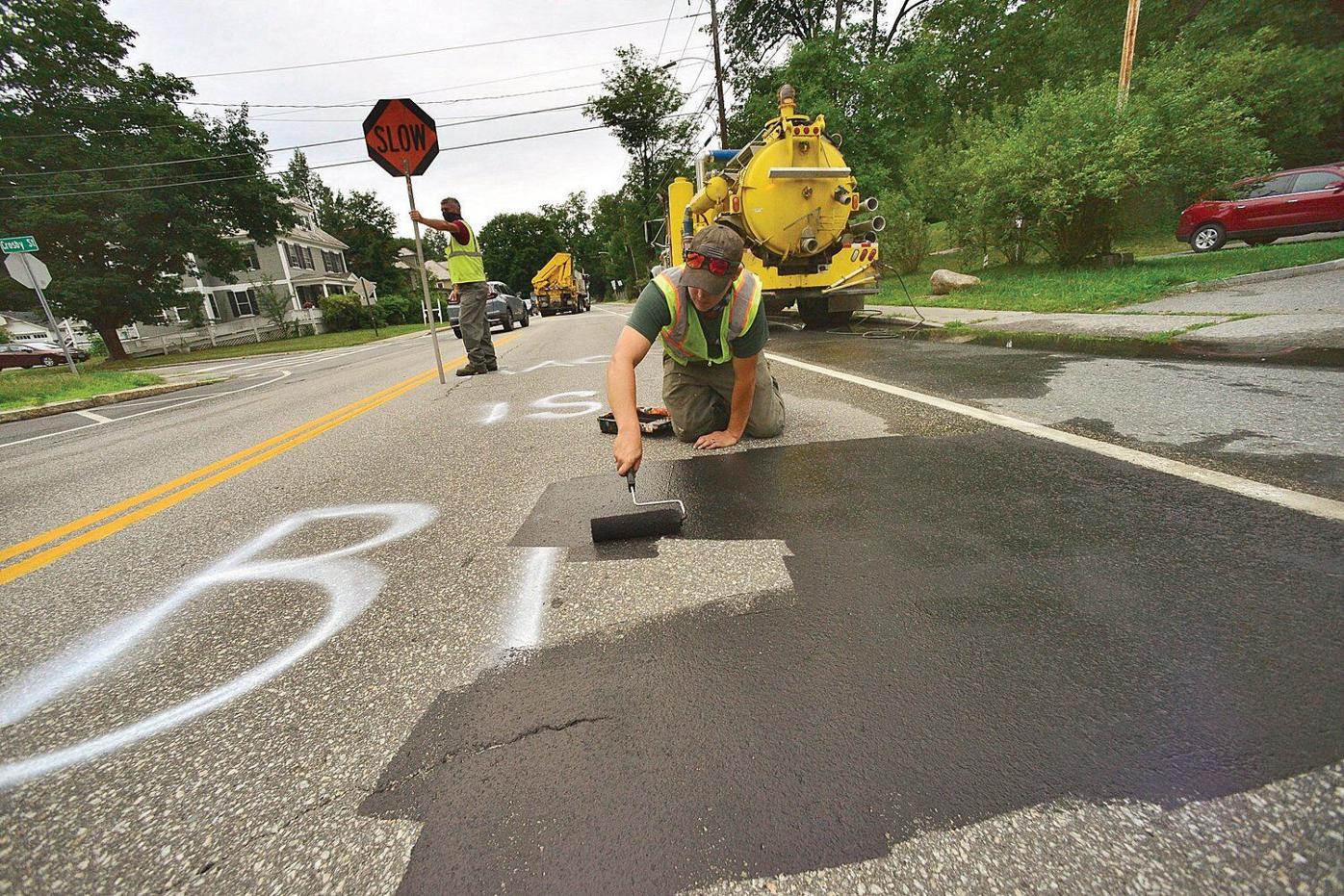 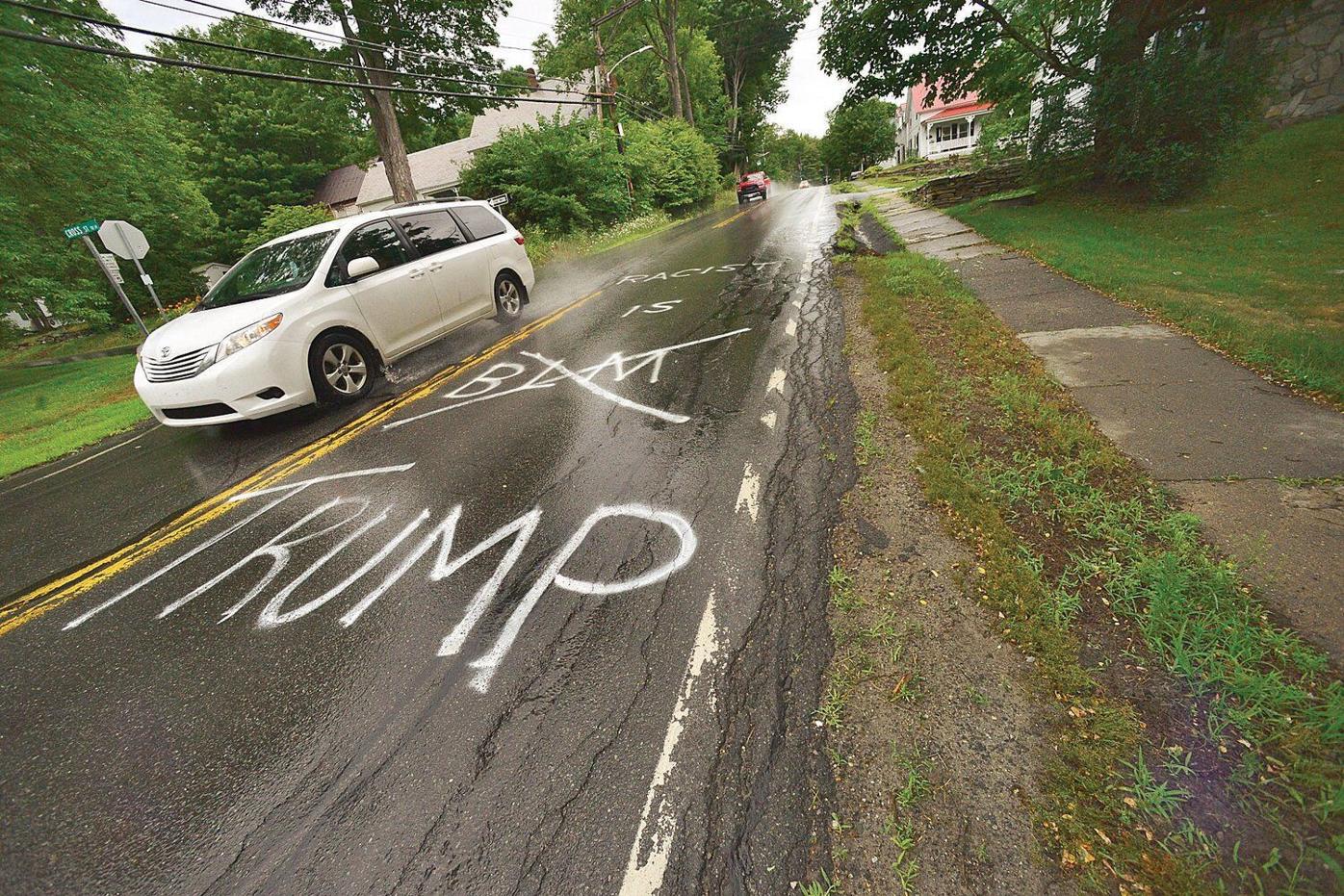 Graffiti on Route 30, in Newfane, had the BLM crossed off and had Trump added as several "BLM is Racist" appeared across Windham County on Wednesday. 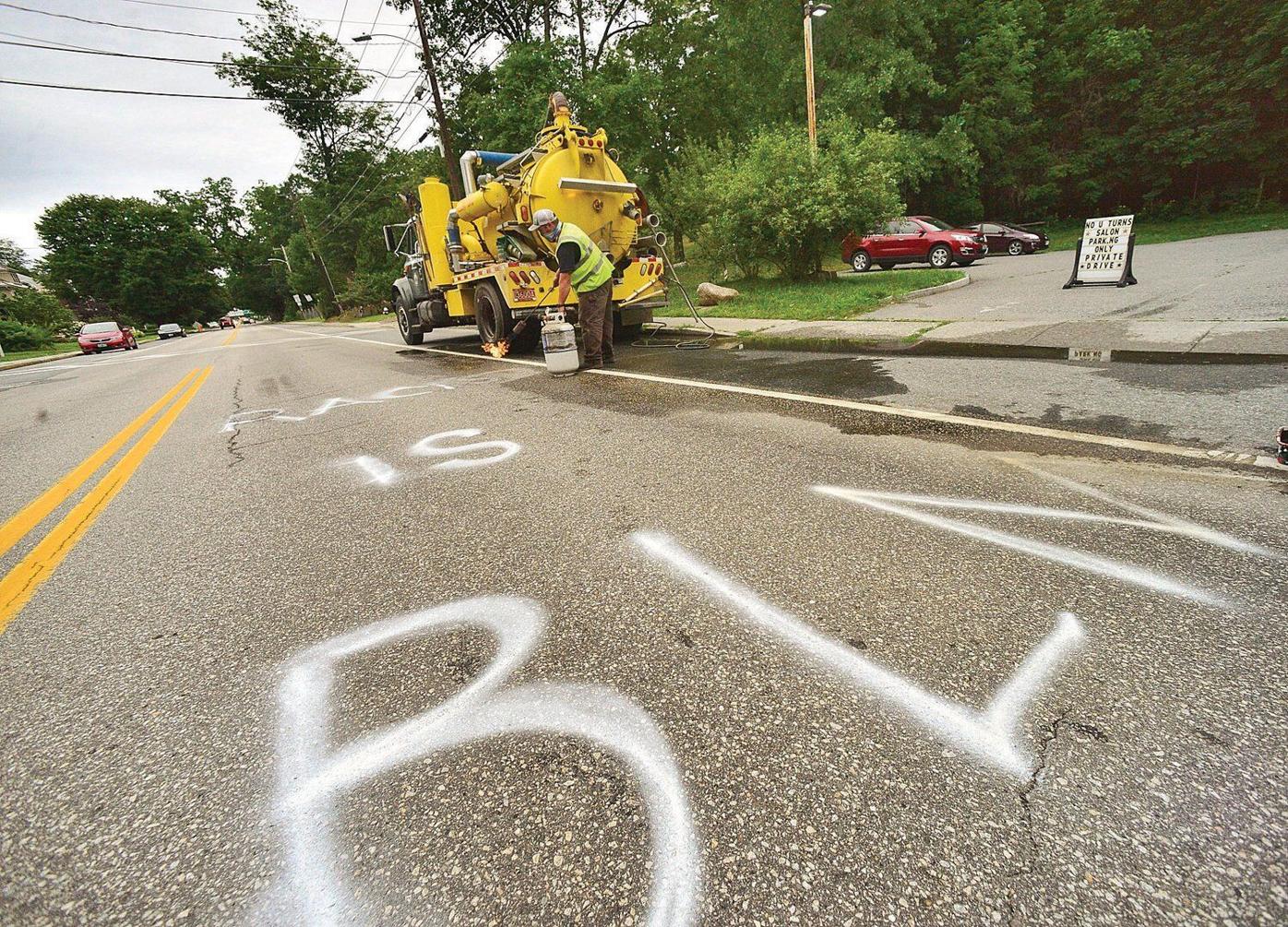 Brattleboro Public Works Department employee Scott Johnson uses a blowtorch to dry an area of Western Avenue, in Brattleboro, as workers paint over "BLM is Racist" graffiti on Wednesday.

A heart trying to cover up the word racist on Route 5, in Putney, Vt., after someone spray-painted "BLM is Racist" on Wednesday.

Graffiti on Route 30, in Newfane, had the BLM crossed off and had Trump added as several "BLM is Racist" appeared across Windham County on Wednesday.

WINDHAM COUNTY — Graffiti vandals struck three Windham County towns sometime during the night Tuesday or Wednesday morning, leaving a message on the roads that many condemned as racist.

Putney, Brattleboro and Newfane residents woke up to nearly identical signs stating that "BLM is Racist," a reference to the Black Lives Matter movement.

In Putney and Newfane, the graffiti was quickly altered to change the message.

In Putney, on Main Street (Route 5), someone painted out the word "racist" and drew a large heart around the whited-out word.

In Newfane, on Route 30 near Cross Street, someone was more political, crossing out BLM and adding "Trump."

In Brattleboro, on Western Avenue, town highway workers were already painting out the message.

Vermont State Police said they are investigating the incidents, but had no report ready by late Wednesday.

Rep. Mike Mrowicki, D-Putney, said people would be gathering in Putney Wednesday evening to show their solidarity with people of color.

"I don't know if it's one person or several. We need to respond," said Mrowicki. "We're going to take our lead from U.S. Rep. John Lewis: 'When you see something, you have to say something.'" Lewis, a famous civil rights leader, died last week from cancer.

Steffen Gillom, president of the Windham chapter of the NAACP, said the vandalism won't deter anyone from the anti-racism work that is underway in Windham County.

The group is working on projects as diverse as addressing police violence to the renaming of Negro Brook in Townsend.

Gillom, who founded the first NAACP chapter in Vermont in 2016 when he came to the area to attend the School for International Training, said the people of color of Windham County wouldn't be "gas lit" by the taunting message.

Gillom and Rep. Nader Hashim, D-Dummerston, vice president of the Windham NAACP chapter, both said they weren't surprised by the racist grafitti.

Gillom said the NAACP plans on asking the Putney Select Board next week for permission to paint a Black Lives Matter mural, similar to the one that was painted in Burlington last weekend. More than 300 people worked to create the mural, which stated "Black Lives Matter" in bright orange paint on Main Street in downtown Burlington. The mural was approved by the Burlington City Council and will remain on the road until 2023, according to published reports.

"The white community is just starting to understand, the ways we have been discriminated — a very covert type of gaslighting. Black people have been gas lit for years. People would say 'I didn't see that,'" said Gillom.

Amy Tatko, a spokewoman for the Vermont Agency of Transportation, issued a statement Wednesday afternoon, saying the graffiti will be removed as soon as possible as a matter of public safety.

”These voices need to be heard, and this discussion needs to unfold," the statement said. "There are, however, different responses that VTrans must take in different situations depending on which type of transportation infrastructure is affected by messages and what type of material is used to write that message. In this case, with graffiti painted on the roadway, there is a serious safety concern. The messages are not at issue; the safety of the traveling public is the concern. We are planning to remove them but that may not be until tomorrow due to equipment needs.”

Tatko refused to answer any questions.

Hashim said he learned about the Putney graffiti as soon as he woke up Wednesday morning. He said he wasn't surprised.

"Right now we're working on what we can do. Our existence is to support Black and brown people," he said.

He said between 20 and 40 people show up for the monthly NAACP meetings, and he said the focus currently is on legislation to address police concerns. Hashim, who is not running for re-election, is a former Vermont State Police trooper who is currently reading for the law with a Brattleboro law firm.

"I'm not at all surprised. There's always going to be agitators out there to try and create division and discord," he said. "I am also proud of the outpouring of support for Black Lives Matter in response to the graffiti."

Hashim said it is possible to have conversations and change people's minds. "It takes patience," he said. During his 2018 campaign, Hashim said he didn't encounter much overt racism, but his campaign volunteers did.

"They asked them, 'How can you vote for a Muslim?'" he said, while pointing out he isn't even a Muslim.

Adam Silverman, a spokesman for the Vermont State Police, said similar vandalism is under investigation in several small towns in Chittenden County, Jericho and Underhill, and that there has been similar vandalism in Craftsbury. He noted the Montpelier Black Lives Matter mural on State Street was vandalized — and repaired — almost immediately after it happened.

Brattleboro Police Capt. Mark Carignan said Wednesday the Windham County incidents are under investigation by the Brattleboro police and other police agencies.

"This is the first one of this scale," Carignan said of the street vandalism on Western Avenue near Crosby Street. He said the Brattleboro Public Works Department quickly removed the graffiti.

He said police will review video cameras in the vicinity of the vandalism sites. He said he heard there were other, unconfirmed as yet, incidents in Windham County.

Carignan said that anyone with information about the vandalism should contact the Brattleboro Police at 802-257-7950.