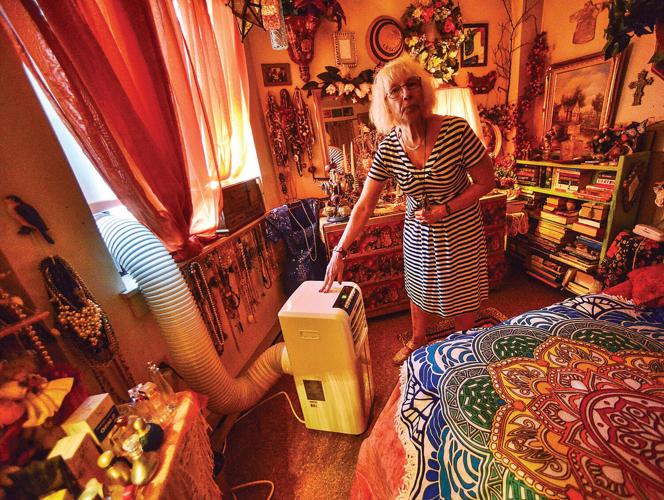 Photos by KRISTOPHER RADDER - BRATTLEBORO REFORMERJudith Ressler talks about the ineffective air-conditioning unit she had to buy because her apartment banned the in-window units. 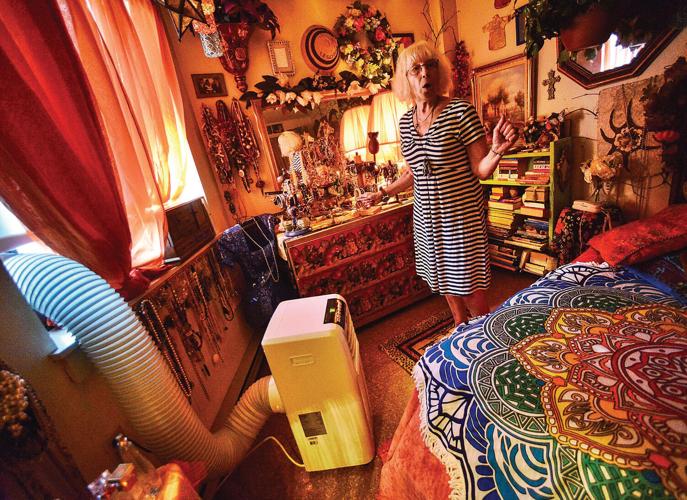 Judith Ressler talks about the ineffective air conditioning unit that she had to buy because the complex banned the window units. 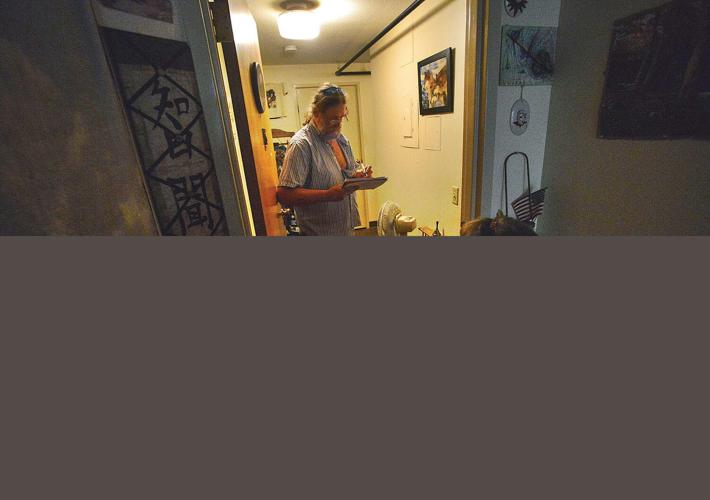 Elizabeth Snyder, president of the building association, collects signatures from the residents to have their window AC units restored. 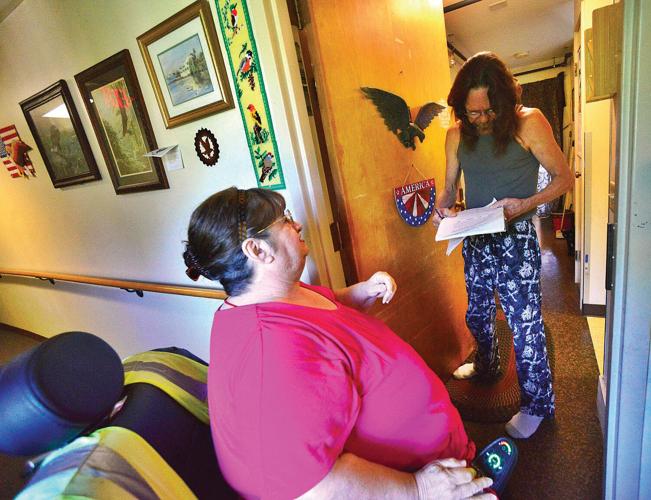 Glenn LaRose signs a petition distributed by Elizabeth Snyder, president of the building association, to the residents to have their window AC units restored.

Photos by KRISTOPHER RADDER - BRATTLEBORO REFORMERJudith Ressler talks about the ineffective air-conditioning unit she had to buy because her apartment banned the in-window units.

Judith Ressler talks about the ineffective air conditioning unit that she had to buy because the complex banned the window units.

Elizabeth Snyder, president of the building association, collects signatures from the residents to have their window AC units restored.

Glenn LaRose signs a petition distributed by Elizabeth Snyder, president of the building association, to the residents to have their window AC units restored.

CORRECTION: In Saturday's "Apartment residents heat up over AC removal," the Reformer should have noted that according to federal law, a reasonable accommodation of a person's disability means finding a practical solution that accommodates the person's disability while not bankrupting the housing provider. A reasonable accommodation must not pose an unfair undue financial or administrative burden on the provider.

In addition, Rachel Batterson, the director of Vermont Legal Aid's Housing Discrimination Law Project, requested a clarification quote: "A floor unit could be seen as a reasonable accommodation. It certainly sounds as if BHP has may have a reasonable reason for not wanting window units. The question is, is there a reasonable accommodation that will accommodate the needs of people with disabilities without imposing too great a burden on the Brattleboro Housing."

BRATTLEBORO — The outside temperature has dropped significantly in the last two weeks, but it's still hot in the Samuel Elliot High Rise, and it's not just a thermometer reading.

"I have lived here for 15 years and for 14 of those years I have had an in-window air-conditioning unit," said Judith Ressler.

Recently, the Brattleboro Housing Partnership, which owns and manages the 62-unit apartment building on Elliot Street, removed the in-window units.

"They want us to get floor models," said Ressler.

"It's unfair," said Elizabeth Snyder, who has collected a petition with 34 signatures requesting the return of their in-window units. "We had a meeting eight months ago and we were told floor units cost $100 but they're anywhere between $260 and $450 each."

Snyder and Ressler said they were told the reason the units had to be removed was because they were dripping and causing damage to lower apartments. They were also told they had no choice when maintenance workers came around and removed the in-window units.

"They didn't give us a choice," said Snyder. Residents were also told BHP would charge $20 to install the ductwork for the floor models, she said.

"The old units leaked because they weren't put in properly," said Snyder, adding she wouldn't mind paying $20 to re-install her in-window unit because "It moves the air around better than a floor model. Those don't do the job."

"We are the elderly, the disabled, the poor and the retired," said Ressler. "We don't have the money to buy floor models."

Affordable floor models, she said, can only cool one room, such a small bedroom, and you can't expect someone to seal themselves off in one room all day while temperatures outside are soaring.

Chris Hart, the executive director of BHP, said tenants have known about the proposed change since the first public discussion last September.

"We can't have the window units in because they don't fit the windows we have here," said Hart.

Jack Mahoney, BHP's portfolio manager said an in-window unit requires a double-hung window with an upper sash to hold it in place.

"Because we don't have those types of windows you get into rigging a support system and we didn't want that at all," said Mahoney.

Dripping condensation from the in-window units caused significant and expensive repairs, especially to lower balconies, he said, as well as rot and mildew to wood exteriors.

But that wasn't the only reason the units had to come out, said Hart.

"As we explored this issue, one of our big concerns was that one of these units was going to fall out and hurt somebody below," she said.

Hart said tenants had plenty of time to save up money to purchase floor models.

"We gave an awful lot of notice and we had multiple meetings with residents at all of our places, including the high rise," she said. "It's in the new handbook that everyone got ahead of time. We also had a very lengthy hearing with the board of commissioners before it adopted the new handbook. There was a lot discussion around the changes. We thought we had given them ample time to save up and buy the appliances."

She said the board voted on the changes in November and they went into effect in January. She also admitted that she had suggested the units were cheaper than they really are, but she corrected that suggestion.

"We understand that people are unhappy, but we have had damage done to our buildings as a result of having the wrong units poorly installed in the wrong windows," said Hart.

Mahoney said the $20 installation fee doesn't cover all the costs involved in installing the duct work for the floor models, but BHP is covering the excess.

Electric bills may change, too, said Hart. People are billed according to the types of appliances they have in their apartments.

"We are being more than fair about this," said Mahoney. "We only include five or six hours a day in the calculation. We are not charging them for 24 hours of use."

"The other point is the high rise was built in 1982," said Hart. "It's an old building and it does not have central air. It would be next to impossible to install central air."

Ressler and Snyder said they aren't ready to give up the fight to get their old air conditioners back. They have contacted Vermont Legal Aid for assistance.

"We are asking BHP to provide reasonable accommodations," said Ressler. "All we want to be able to do is put our window ac units back in so we can enjoy our whole apartments."

Rachel Batterson, the director of Vermont Legal Aid's Housing Discrimination Law Project, said the tenants at Samuel Elliot might have a case against their landlord, and then again, they may not.

"There are two different areas of law that might cover this problem," she said. "But we are in the process of looking at the specific regulations that govern this particular property. In some cases, housing providers have to provide reasonable accommodations to people with disabilities or people who have an impairment that limits a person in one or more major life activities, such as thinking, breathing or eating. The duty to accommodate is fairly broad."

Another factor to be considered when determining a reasonable accommodation is whether it poses an unfair undue financial or administrative burden, noted Batterson.

This week, with outside temperatures not so extreme, tenants at the high rise are not suffering like two weeks ago, but, said Ressler, it's bound to get hot again, and soon.

"We need to breathe cool air for health reasons," she said. "We can't deal with these floor models. We want our AC units back."