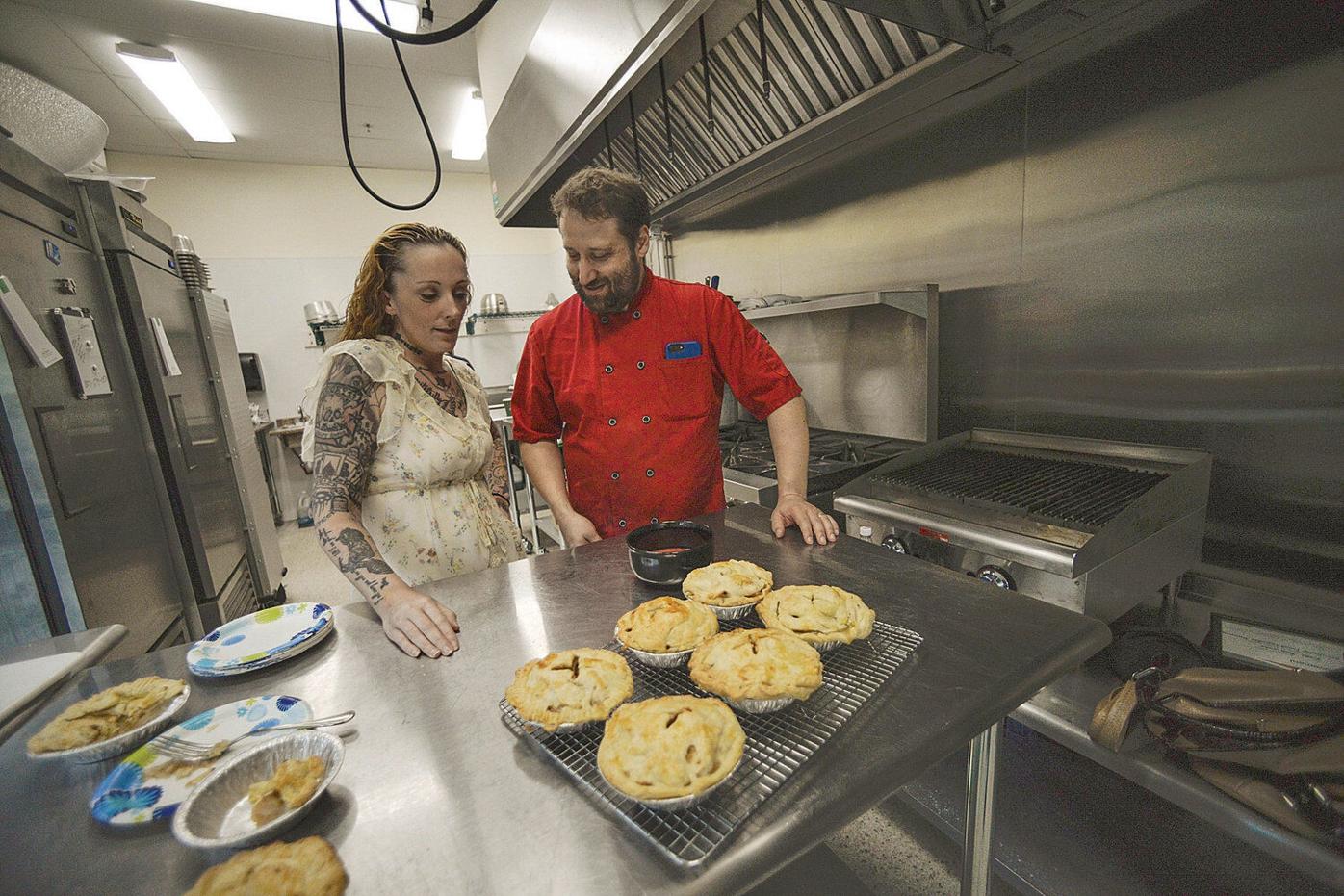 Tristan Toleno talks with Autumn McAuliffe during the Strolling of the Heifers Farm-To-Table Culinary Apprenticeship Graduation Celebration at the River Garden. 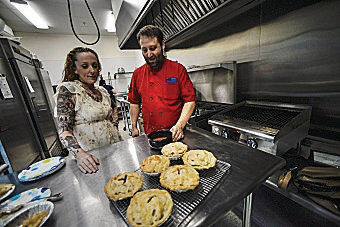 Tristan Toleno talks with Autumn McAuliffe during the Strolling of the Heifers' Farm-To-Table Culinary Apprenticeship Graduation Celebration at the River Garden on Monday, Sept. 17, 2018.

Tristan Toleno talks with Autumn McAuliffe during the Strolling of the Heifers Farm-To-Table Culinary Apprenticeship Graduation Celebration at the River Garden.

Tristan Toleno talks with Autumn McAuliffe during the Strolling of the Heifers' Farm-To-Table Culinary Apprenticeship Graduation Celebration at the River Garden on Monday, Sept. 17, 2018.

Strolling of the Heifers graduated five students from their Farm-to-Table Culinary Apprenticeship program at noon Monday. The public ceremony took place at the Stroll headquarters, the Robert Gibson River Garden in Brattleboro.

The goal of the program, in its fourth year, is to have all participants placed in permanent paid employment in the culinary field by the time they graduate, according to Orly Munzing, founder and executive director of Strolling of the Heifers.

Next came a two-week boot camp in the Strolling of the Heifers's commercial kitchen at the River Garden. The group did what Toleno called a "deep dive" into the 120 varieties of heirloom apples ecologically grown at the Scott Farm Orchard in Dummerston, Vermont.

Every Monday, the group reconvened at the River Garden "to debrief, support each other, hear how things are going, what's working, what might not be working and problem-solve," Toleno said.

For their graduation ceremony, the group shared with members of the public both applesauce and apple pies they had cooked, using several varieties of Scott Farm's heirloom apples.

The applesauce, which was lightly sweetened, was made from seven varieties of apples, including the Dolgo crabapple, which gave it a deep pink color.

"The pies were made with five different varieties of apples," Toleno said. "We left the skin on because apples have most of their flavor differences in the skin. However, we sliced them thinly, so you shouldn't have a problem chewing."

As students served tastings of applesauce and slices of pie, each student read aloud a description of one of the apples used: Holstein, Wolf River, Ribston Pippin, Claygate Pearmain, Ginger Gold, Lamb Abbey Permain and Cortland.

The graduates shared what they appreciated about the program. Autumn McAuliffe said she has been working in nursing since she was 16 and decided to participate in the program because she wanted to open up her horizons.

Cara Rodrigues said she had worked in hospitality as a chambermaid and a dishwasher. She was inspired to try the program by her father, who was a chef for 25 years.

"I wanted to do something with my life," she said, "so I decided to take a leap of faith and do it. Taking the risk was worth it."

Rodrigues apprenticed at Against the Grain.

Erin Spevak said she was grateful for being "matched with a great company (True North Granola). Without this program, I wouldn't have had that opportunity. I look forward to going to work instead of dreading it."

Gary Stroud said on the first day of class, he heard the word "gleaning," but he wasn't sure what it meant. Then, the first week of July he was at a farm gleaning kale in the field and learned first-hand the meaning of the word.

"I was living farm-to-table," he said.

Stroud has always loved cooking, which his mother and grandmother taught him. At his apprenticeship, he said he helped people learn about healthier alternatives in food shopping and food preparation.

Troy Weeks had a 20-year career in plumbing and HVAC, but the wear-and-tear on his body compelled him to stop.

"I heard about this program through Career Readiness at Community College of Vermont," he said. "I've always loved cooking so I decided to try it. Tristan is a great teacher. There's so much knowledge in that noggin. This program has opened up a new page in my life."

"This group became such a community," Munzing said. "We learned a tremendous amount from them."

Danielle Kracum, an alumna of the first year of the program who was in the audience, said in an interview she has happy memories of the program and remains grateful for all that she learned.

"The program was empowering," she said. "It gave me confidence."

Vicki Friedman, job coach with the apprenticeship program since its inception, said she is always gratified at the end to see how the program can change people's lives.

"When they first come in and we hear their stories, what they've been through, it's difficult," she said. "At the beginning, we don't know exactly how this program will help our participants, but we know by the end, they will be transformed."

Strolling of the Heifers, a nonprofit organization, has as its mission connecting people with healthy local food, encouraging and facilitating innovation and entrepreneurship in the farm/food sector, and supporting the development of stronger local food systems and healthy, sharing, connected, resilient communities. More information is available at www.strollingoftheheifers.com.

Nancy A. Olson, a frequent contributor to the Reformer, can be reached at olsonnan47@gmail.com.