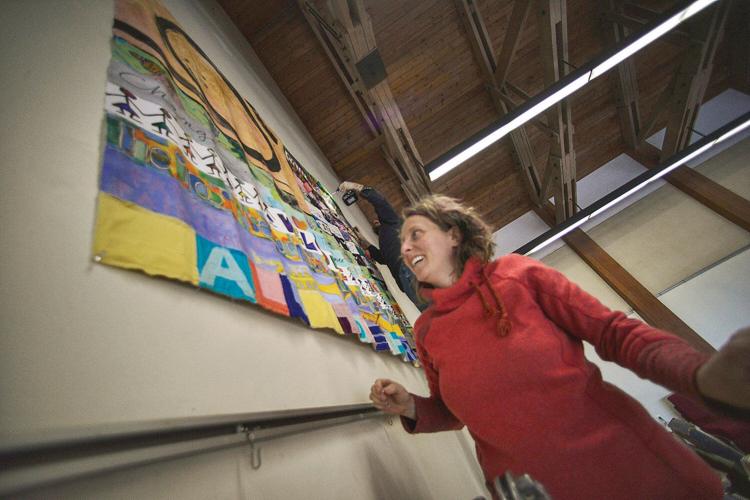 Marta Burnbaum puts a thumbtack into the "Art Connects US" flag that was created by Brattleboro West Arts, at the All Souls Unitarian Universalist Church on Tuesday, Jan. 15, 2019. 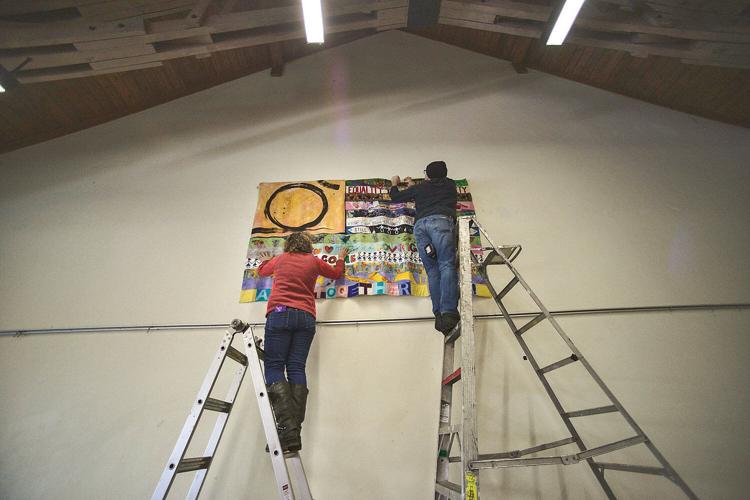 KRISTOPHER RADDER - BRATTLEBORO REFORMERMarta Burnbaum and Chris Lann hang up the "Art Connects US" flag that was created by Brattleboro West Arts, at the All Souls Unitarian Universalist Church on Tuesday, Jan. 15, 2019. 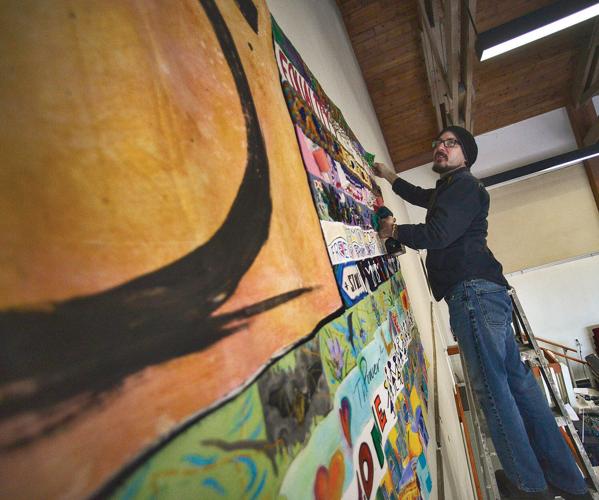 KRISTOPHER RADDER - BRATTLEBORO REFORMERChris Lann checks to see if the "Art Connects US" flag is level.

Marta Burnbaum puts a thumbtack into the "Art Connects US" flag that was created by Brattleboro West Arts, at the All Souls Unitarian Universalist Church on Tuesday, Jan. 15, 2019.

KRISTOPHER RADDER - BRATTLEBORO REFORMERMarta Burnbaum and Chris Lann hang up the "Art Connects US" flag that was created by Brattleboro West Arts, at the All Souls Unitarian Universalist Church on Tuesday, Jan. 15, 2019.

KRISTOPHER RADDER - BRATTLEBORO REFORMERChris Lann checks to see if the "Art Connects US" flag is level.

WEST BRATTLEBORO — All Souls Church jumped at the chance to host a new and political creation of 14 West Brattleboro artists that was looking for a home.

"We were honored to be asked," said Rev. Shayna Appel. "It spoke volumes about what All Souls stands for," she said.

Two years ago, members of Brattleboro-West Arts had created a special textile sculpture, based on the American flag, as the artists' group coped with the tumultuous political climate. After creating their flag, they marched in local parades with it, had it displayed in downtown storefronts and businesses, and even saw it displayed in the Midwest.

"The artists didn't want it folded up in someone's closet for the rest of its life," said artist Kay Curtis. "It needed a place to live."

The group had rented a grange in Dummerston to assemble the flag. "It's a symbol of what we stand for," said Curtis.

The election of Donald Trump as president may have triggered the artists' discussion, said fellow artist Walter Slowinski, but he said the flag was not about their feelings toward Trump.

The artists' group approached All Souls, a Unitarian-Universalist church in West Brattleboro, and Appel said the proposal was reviewed by various committees of the church and accepted for permanent display.

The 8-foot flag, called "Art Connects US," was recently installed in the main hall of the church, and it is slated to be dedicated this Sunday during a service the church is calling "Poetic Justice."

The church is known for what it calls progressive worship, as well as offering a welcoming community and a commitment to peace and justice. None of the artists are members of All Souls Church, Curtis and Appel said, which the minister said was even more satisfying. Curtis said Brattleboro-West Arts is a group of local artists who meet monthly for discussion and sharing a meal. After Trump's election, the group decided that it should respond and create an artists' response to the politics of the moment. Curtis said the group decided to take a positive approach with the art project.

The piece contains 13 stripes - each done by one of the Brattleboro-West artists, and a large block section, which was created by artist Petria Mitchell, with a large circle instead of a field of stars. Mitchell, in her artist's statement, said the circle "represents all life and its diversity! Choosing to use this universal symbol of inclusiveness and equanimity offers a familiar resting place for the soul."

Slowinski, a painter, potter and musician, decided to paint musical instruments on his portion of the flag. "Music is something that brings people together," he said. "Art and music are very powerful."

He said he loves painting musical instruments, in addition to playing them, and he said the dimensions of his stripe was a challenge, since it was only 6 inches wide but more than 8 feet long. Slowinski, who is the coordinator of the artists' group, said the new home of the artists' flag was gratifying. "It's a great spot and it will be seen a lot," he said.

Curtis said she used her experience running a children's day care to make her part of the flag. Every day, she said, the children hold hands, say what they're thankful for, and shout 'All Together Now.' Through those small rituals, she said, community is built. The dedication ceremony is slated for the regular Sunday morning worship. Appel said the large snowstorm that is predicted for Vermont Saturday night into Sunday may delay the dedication a week.