A mockup of how a sculpture on the Beaver Street wall behind The Richards Group will look. 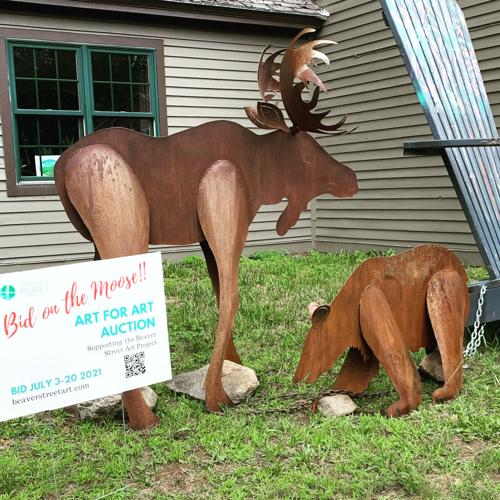 Lawn sculptures Elise and Payne Junker donated to the auction to raise money for the public art project on Beaver Street.

A mockup of how a sculpture on the Beaver Street wall behind The Richards Group will look.

Lawn sculptures Elise and Payne Junker donated to the auction to raise money for the public art project on Beaver Street.

WILMINGTON — A sculpture highlighting many facets of the community — from mountains and wildlife to hikers and kayakers — needs some more financial love before it starts going up.

“We’re raising funds because we need some community support to get us over that last hump of fundraising so we can get the Better Places grant,” said Meg Staloff, program coordinator for Wilmington Works. “We need just the last little bit.”

The downtown organization is looking to secure matching funds from the Vermont Agency of Commerce and Community Development’s Better Places grant. Staloff said the hope is to raise about $6,000 for the approximately $44,000 project via the silent Art for Art Auction happening online until July 20 at beaverstreetart.com.

Elise and Payne Junker, the Chester couple whose public art proposal for a metal sculpture the community overwhelmingly supported during a vote last year, donated two lawn sculptures for the auction — a moose and a bear. Staloff said the winner has to pick up the sculptures but the Junkers will help with installation.

Jim McGrath, a painter who has a studio downtown, donated two limited run prints he made after Tropical Storm Irene in 2011 to help raise money for the town at the time. He had found two more and provided them to this auction and another one to fundraise for Old Home Week, Staloff said.

“This print is having quite the little bidding war,” she said. “Then there’s lots of other local artists who have generously joined in to support this public art auction because they’re like, ‘Art for art.’”

Staloff described the sculpture coming to the wall behind The Richards Group on Beaver Street by the Old School Community Center as the Junkers’ biggest outdoor commission, “their magnum opus” and “crowning jewel of their career.” Wilmington holds a special place in their hearts because the couple met at a craft fair in town more than 30 years ago.

A little road trip sparked the idea behind their proposal for the sculpture.

“We started by taking a drive from Stratton over to Wilmington, and looking at the topography and the water shed,” Elise said. “That’s how we started and thought this is kind of how Wilmington started.”

Elise said she and Payne also listened to the Wilmington Works board and the community, wanting to honor the history and people of the town.

“Everybody had their thoughts and we kind of mixed it up in a brew,” she said. “And then as artists, we brew it up and see what pours out the spout.”

So far, about $25,000 is secured for the project plus several in-kind donations. Staloff anticipates to raise more through donations, a raffle for gift certificates and some funds from Wilmington Works, which is one of Vermont’s downtown organizations.

The project is awaiting final approval from The Richards Group, which owns the wall. Staloff said she hopes the Junkers will start cutting and fabricating in their studio within the next few weeks while the wall is being resurfaced.

“Then they’ll be working on cutting the sections and welding together the pieces,” she said, “then they’ll bring it down here.”

If everything goes as planned, the first section will be installed by winter. The goal is to finish up by late spring or the beginning of next summer.

Community members have called for a more colorful sculpture than initially proposed. Staloff said Elise says color washes can be applied to the steel structure after it goes up and they shouldn’t fade too fast.

The sculpture will have “a limited color palette but it will be fun if it adds some accent to colors,” Staloff said. She noted the artwork could potentially be moved later on.

The Vermont Arts Council provided grant funding for the planning and design process.

COVID-19 slowed efforts a bit because those involved in the process couldn’t meet as much, Staloff said. During the planning stages, The Richards Group decided nothing should be permanently bolted to the wall.

“It was kind of a trick to figure out how to install it without drilling directly into the wall,” Staloff said. “It would have been easy but it would have had more of an impact on the wall and property.”

Staloff said engineers at Stevens & Associates working with Wilmington Works, The Richards Group and artist team were “wonderful” because they listened to everyone’s concerns, needs and wants to make the project happen.

The plan is to divide the project into different panels and focus on one at a time. The artists visited the wall during the Fourth of July weekend to measure it and make markings with sidewalk chalk.

Elise said the wall starts at 80 feet long and 20 feet high then gradually drops to 3 feet high and has different angles.

Fabrication work has not yet begun. Payne said test samples are being made with thinner material.

“Once we have all the bracketing in place and our technical drawings and the engineer approves it, the actual cutting of the pieces and putting on, we know that goes fairly quickly and it’s pretty routine for us,” Elise said. “It’s getting our ducks in a row before that starts.”

With the project picking up again after the pandemic put a pause on things, Elise said, “We’re starting to get a little excited.”

Payne said he’s finishing up other work to make way for big sheets of steel — 10 feet long and 5 feet wide, weighing 300 to 400 pounds each — that will be used for the Wilmington sculpture. The artists hope to start bringing pieces to Wilmington in mid-August or the fall.