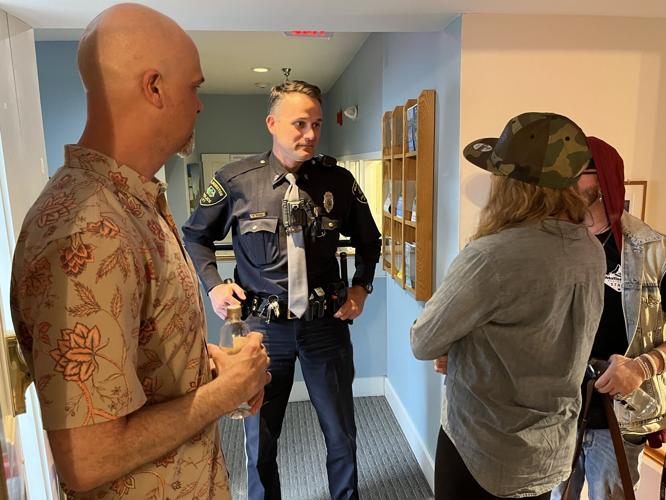 Christian Engel, co-owner of Ratu's Liquor and Market, left, and Police Chief Matt Murano speak with other attendees of an informational meeting ahead of the re-vote on allowing retail cannabis sales on Thursday. 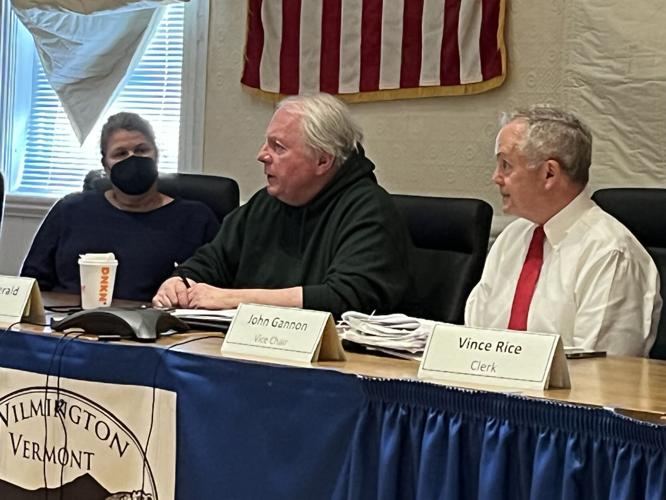 Select Board members Sarah Fisher, from left, Tom Fitzgerald and John Gannon take questions from the public at an informational meeting ahead of the re-vote on allowing retail cannabis sales on Thursday.

Christian Engel, co-owner of Ratu's Liquor and Market, left, and Police Chief Matt Murano speak with other attendees of an informational meeting ahead of the re-vote on allowing retail cannabis sales on Thursday.

Select Board members Sarah Fisher, from left, Tom Fitzgerald and John Gannon take questions from the public at an informational meeting ahead of the re-vote on allowing retail cannabis sales on Thursday.

WILMINGTON — No question was too sticky as residents aired concerns and details about retail cannabis ahead of a re-vote on the issue.

The initial vote occurred March 1 after a petition was submitted by the owners of Ratu’s Liquor and Market, who want to sell cannabis in their downtown store. A re-vote is scheduled for Tuesday after a successful petition drive by Charlotte Verry of Wilmington, who shared concerns in a letter to the editor in the Deerfield Valley News about how the move could affect the culture downtown, children’s safety and impaired driving.

Select Board Vice Chairman John Gannon, who also serves as a state representative and vice chairman of the House Committee on Government Operations, said cannabis is legal to consume and grow in Vermont.

“We’re working on standing up a retail cannabis market,” he said Thursday at an informational meeting, which drew about two dozen people in person and another dozen via Zoom. “My interest has been consumer protection and reducing the illicit market.”

Gannon said the only question before voters next week is whether to allow retail establishments.

“Now, one of the questions is how many retail establishments can we have?” he said. “When we vote next Tuesday, that opens the door, but the law also allows us to opt out at any time. So if we feel one retail licensee is enough, we can vote, and that’s it.”

If voters opted to no longer allow retail cannabis establishments after permitting them, existing operations would be grandfathered in. Wilmington couldn’t have another vote until next year, Select Board Chairman Tom Fitzgerald said.

Towns can’t set up special zoning to prevent cannabis licensees of any type, Gannon said, but the Vermont Cannabis Control Board will be controlling how many licenses are issued and don’t want to have too many operations concentrated in one area. He said the town can choose to have its own commission, which would mean licensees would need local approval before going to the state, similar to the way liquor licenses are handled now.

“However,” he said, “there is a preauthorization process going on with the state, but that’s for cultivation.”

No one under the age of 21 will be allowed to walk into a cannabis store, Gannon told Kathy Costello of Wilmington. He anticipates customers will be carded before entering and again when purchasing.

“I did my research and couldn’t find enough negative,” Costello said.

Police Chief Matt Murano said the department has concerns about drug-impaired driving, as the number of such incidents is increasing, and many involve cannabis.

“It’s a far more complicated task to handle a drug-impaired driver than it is an alcohol-impaired driver,” he said. Vermont “has not approved a saliva-based test for policing. I don’t see much movement there.”

Gannon said once the federal government approves a saliva-based testing, state lawmakers hope to adopt it in Vermont.

With retail sales, Murano expects to see an increase in the number of incidents in which cannabis is being consumed in public.

“We can handle that,” he said. “I think we have a lot more education to do about cannabis use. In my experience, there is a difference in how people look at drug-impaired driving than alcohol-impaired driving.”

Training will be available to law enforcement officers, Gannon said. He anticipates nearly $1 million of cannabis tax revenue will go into the state’s Substance Misuse Prevention Fund the first year, with more coming in later years.

Licensees are advised to direct some of their own profit toward prevention efforts or mental health services, Karen Mangold of Wilmington said. She’s seeking a license to cultivate cannabis to sell to retailers.

“I can give you many, many testimonials,” she said, referring to stories of how cannabis has benefited people in different ways.

Regarding concerns about the safety of children, Mangold said parents need to teach them about cannabis. She called it “a plant, herb and medicine.”

Addressing worries about parking downtown, Gannon said the Wilmington Development Review Board would look at the issue on an individual basis.

“Frankly, with the number of empty storefronts downtown, I’d be happy to see any new business,” he said.

“I think it can be done. It’s got to be done right,” D.J. Boyd of Wilmington said. “It can be done safely.”

Alternatively, Boyd said, cannabis can be purchased illegally. His family produced CBD, or cannabidiol, and sales didn’t go as well as they had hoped.

WILMINGTON — Residents reaffirmed their support for retail cannabis in a 276-136 vote Tuesday.

WILMINGTON — Following a successful petition, a revote on allowing retail cannabis sales in town is set for May 10.