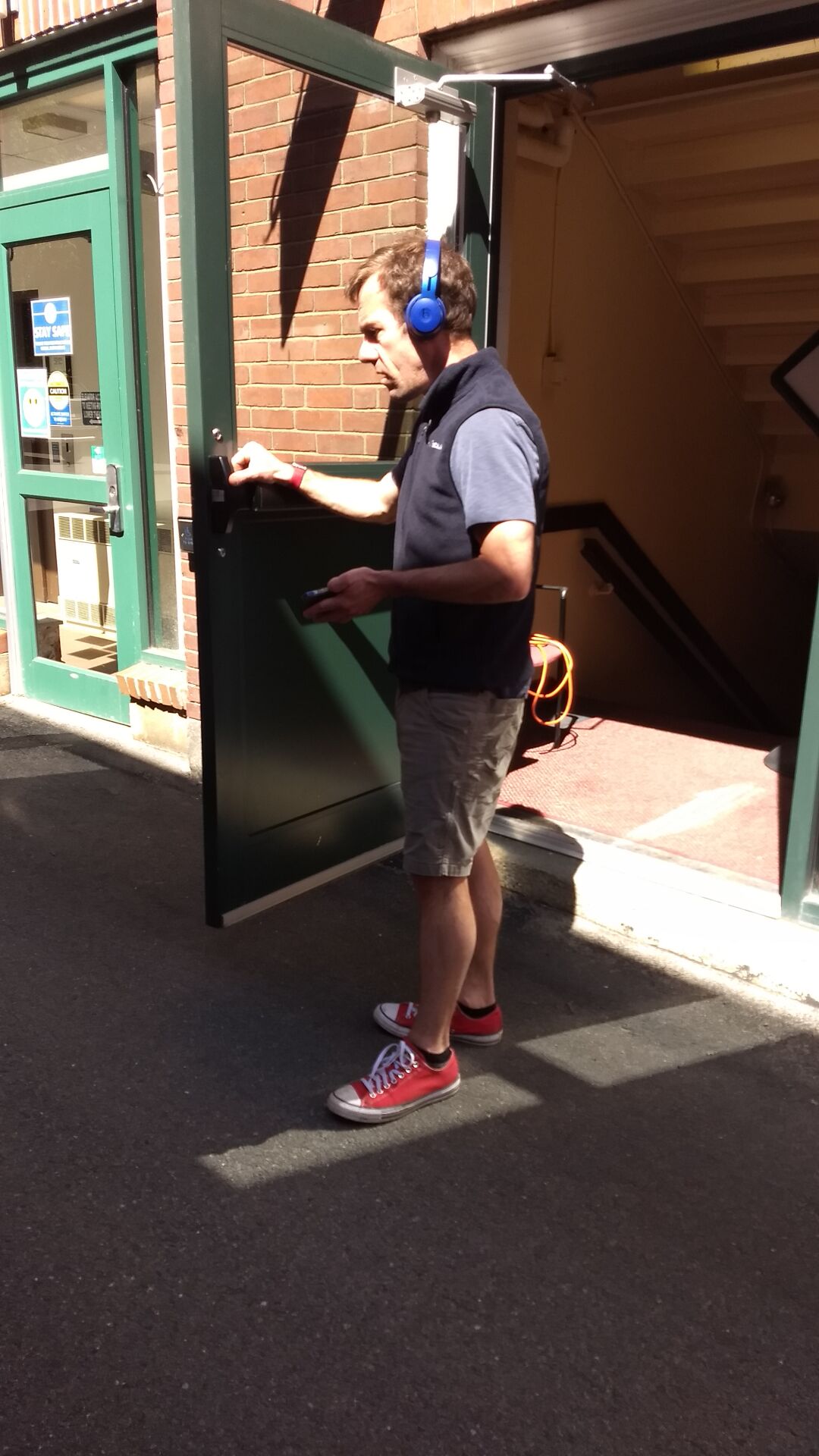 Chuck Wise, the Rockingham town zoning administrator, checks the wifi reception for the Zoom broadcast for the upcoming annual Bellows Falls Village meeting on Monday night. This year, the meeting will be held in the Lower Town Hall Theater. 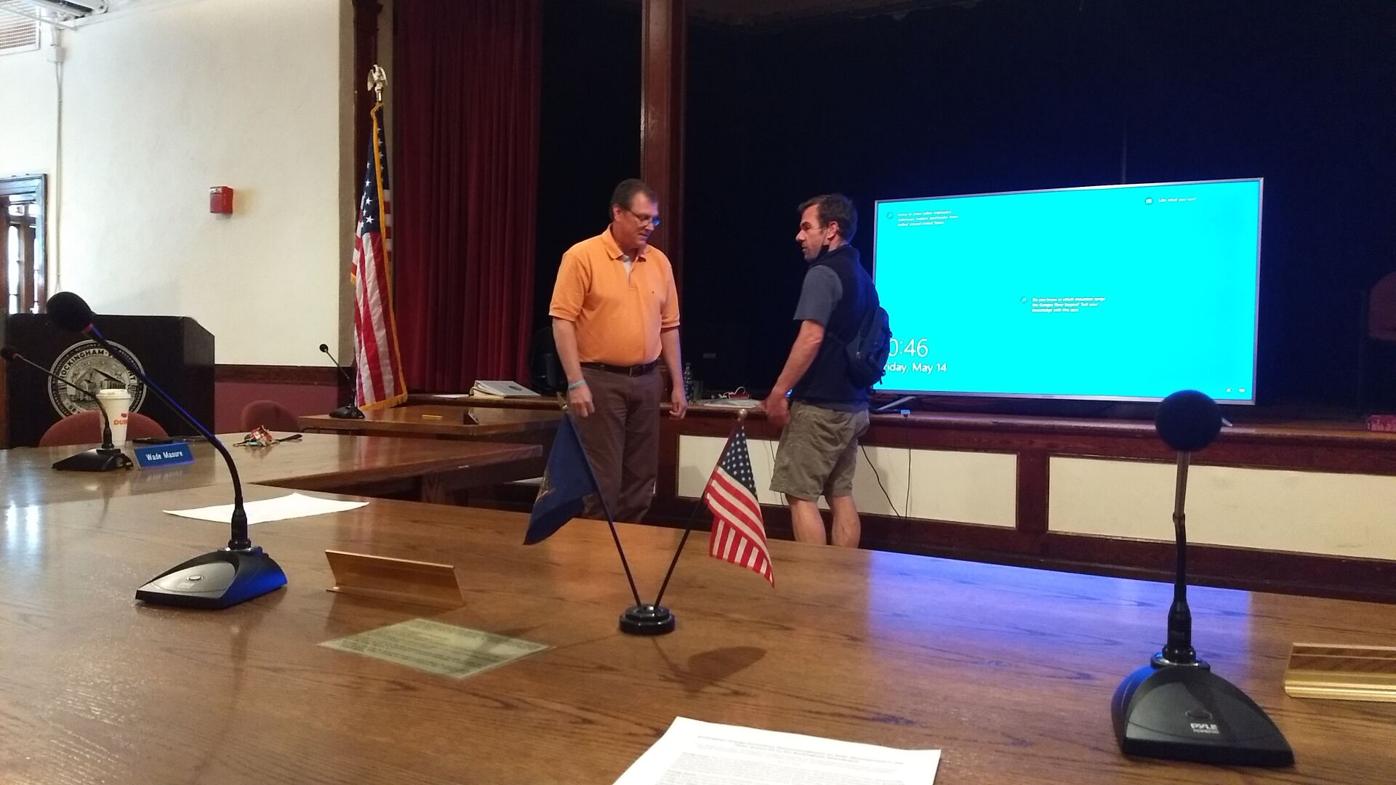 Chuck Wise, the Rockingham town zoning administrator, checks the wifi reception for the Zoom broadcast for the upcoming annual Bellows Falls Village meeting on Monday night. This year, the meeting will be held in the Lower Town Hall Theater.

There is one big change: Obuchowski and Pickup decided to hold the meeting downstairs in the Town Hall, in the Lower Theater, rather than upstairs in the Bellows Falls Opera House, because of the technology and equipment needed for a Zoom village meeting.

Determined to get as many people to attend the meeting as possible -- either in person or virtually -- the decision was only made after Gov. Phil Scott loosened the distance requirements for a public gathering, Pickup stressed.

Without the change announced on Thursday, the meeting would have been in the Opera House and the village and officials from Falls Area Community Television would have had to spend about eight hours moving the equipment and setting it back up, Pickup said.

The village trustees, as well as the Rockingham Select Board, have conducted all of their meetings via Zoom during the coronavirus pandemic, but the meetings have been broadcast from the Lower Theater, which used to be called the Women's Club Room.

Pickup, Chuck Wise, the town zoning administrator, Obuchowski and Wright, helped by Alex Stradling, the executive director of FACTv, worked out the kinks in the broadcast system which had plagued Rockingham Town Meeting in March with several glitches.

And the village officials settled on a protocol for those residents watching the meeting via Zoom on how to vote and how to raise questions. Obuchowski will explain those protocols at the beginning of Monday night's meeting.

In March, Pickup said, there were many different audio problems. The Town Hall Lower Theater has wireless microphones.

Obuchowski noted that with changes adopted last year, there are few issues that would be decided Monday night at the meeting. The village budget will be decided by Australian balloting, during all-day voting on Tuesday at the Masonic Temple.

Obuchowski said that a member of the board of civil authority would be checking residents via Zoom to make sure they are eligible to vote.

This year, unlike last year and at March Town Meeting, there are no contests for any of the village positions up for grabs.

Wright and Trustees James "Jiggs" McAuliffe and Stefan Golec are all running unopposed. A year ago, there were seven people running for two trustee spots, with voters a year ago sending two new residents to the board: Jeff Dunbar and Wade Masure.

The only real issue this year, Obuchowski pointed out, is the $1.6 million village budget, which is up about $100,000, which would result in a 0.6 percent increase in taxes, Pickup and Wright said.

Bellows Falls voters approved switching approval of budgets to Australian balloting. Previously, the budget was passed on the floor of the meeting.

Obuchowski said he expected in-person attendance would be low because of that, but Pickup stressed  that there was plenty of room in the Lower Theater for about 70 residents and village employees, if need be.

He said people will be asked to wear masks "as a courtesy," despite the recent loosening of restrictions.

Monday night's meeting starts at 7 p.m. in the Lower Theater. Voting on Tuesday starts at 8 a.m., and closes at 7 p.m., at the Masonic Temple, Obuchowski said.