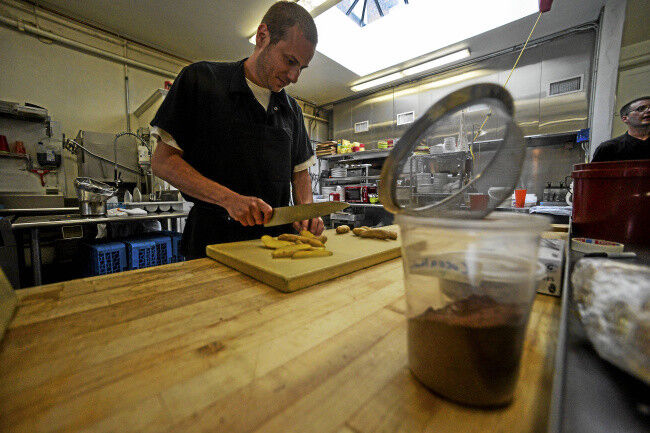 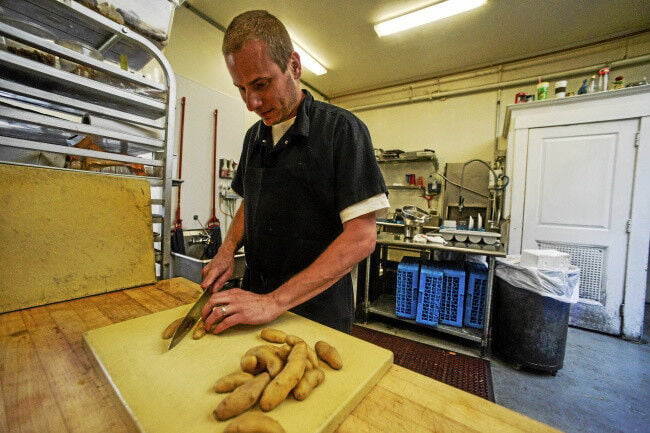 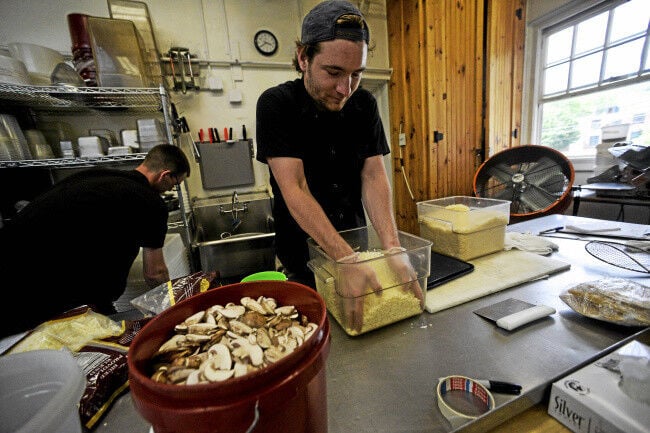 Jake Thibault, a line cook at Popolo Restaurant in Bellows Falls, prepares food in the kitchen on Tuesday, June 7. 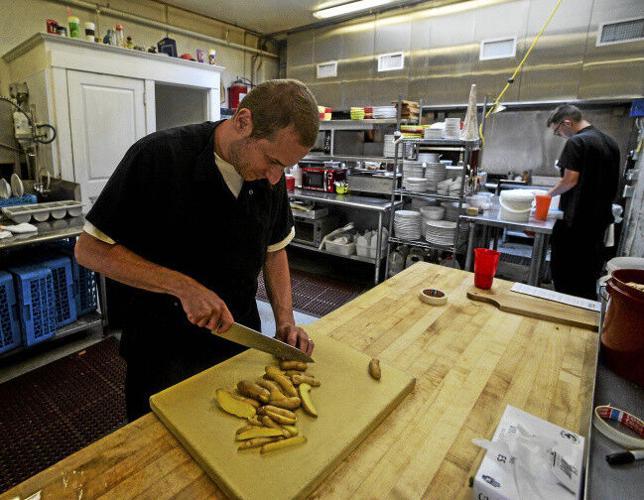 Jake Thibault, a line cook at Popolo Restaurant in Bellows Falls, prepares food in the kitchen on Tuesday, June 7.

BELLOWS FALLS — A small restaurant in town is shifting its business plan to ensure its employees receive at least $15 per hour.

Seven of the 20 employees at Popolo, an Italian-inspired farm-to-table eatery located at 36 Square, will see an adjustment in their wages this Friday when a 6 percent service charge is added to each customer's overall bill.

"While servers manage to earn a reasonable wage by the inclusion of gratuities, now there's the Living Wage Adjustment for everyone else," said Gary Smith, Popolo's co-founder and general manager.

Smith said this will primarily and positively impact staff that work in the back of the house such as the line cook, dishwasher as well as the busers on the floor and possibly the hosts. At the end of every work week when employees are paid, their wages will be calculated and adjusted to $15 by the revenue made from the service charge. However, he notes the Living Wage Adjustment service charge will not be applicable to the servers who already make $15. He notes it is a rarity that his servers do not make $15 an hour from gratuity.

This idea of increased wages for Popolo employees was proposed in January when Smith held an annual meeting with some of the restaurant's 25 shareholders. There was no formal vote that took place, but Smith says there was a general consensus to make this change on behalf of the employees.

While such an adjustment may be different for other employers, Smith says that based on previous experience, 6 percent will cover the pay increase.

"In order to make our restaurant economics work so employees can be paid $15, we have to raise prices," said Smith.

Smith points to two reasons for this method. First, he believes that it will keep the most money in employees' pockets. Smith said he has consulted with the Vermont Department of Taxes, which he said agrees that, as long as the restaurant follows some simple rules about the notice and disbursement of this revenue, the charge will not be subject to Rooms and Meals Tax, meaning all of the additional revenue will go to employees. Secondly, he feels this offers a "teaching moment," as it strikes up the conversation of "where should the minimum wage stand?"

"It's a way of saying, 'yes we can raise the wages of employees and our customers may need to pay a little more,'" said Smith.

According to Smith, Oona's Restaurant was the Village's only full-service eatery until it closed in 2006 due to a fire that damaged it and several other businesses. When 25 investors came together, Popolo was built in 2012. Smith is one of three founders, along with John-Michael Maciejewski and Kristen Fehrenbach, who formed an investment group that put the restaurant together financially.

Smith says he has been asked by people in the town why the restaurant did not raise the prices of items on the menu. He answered that he believes the Living Wage Adjustment creates "transparency" for customers and also reminds diners that they are helping to guarantee workers have enough to live.

"We're asking people with families to work for $9.60 an hour, and that seems unfair," said Smith.

Overall, Smith said the community has embraced this proposal and been supportive on social media. However, he notes there are a few "naysayers" who he hopes will hear him out on the reasoning for this change and will understand how Popolo functions. He notes that the restaurant is often a "break-even" operation and that the goal is to take the stress off the employees by offering a "fair wage." Smith adds that this adjustment does not monetarily impact the shareholders or owner wages.

"I'm trying to make it clear what's going on; this involves me sharing that Popolo is not a Fortune 500 with a highly paid CEO and the owner squeezing as much as he out of workers," said Smith.

Smith also said some folks are mistaking a service charge for gratuity. Smith clarified that a service charge is something a customer must pay, while gratuity is at the customer's discretion. He notes that legally, not one bit of a server's or bartender's tip can go to the back of the house; consequently, this is why Smith has chosen the Living Wage Adjustment that he says will ensure a livable wage for his employees.

"Many small contributions make this improvement possible," Smith said in a press release. "There aren't many diners who will balk at spending a couple dollars more to secure quality of life for our workers. It's part of the cost of dining out."

The new charge begins the weekend of June 10. For more information contact Gary Smith at Popolo at gary@popolo.us or visit www.popolomeanspeople.com.