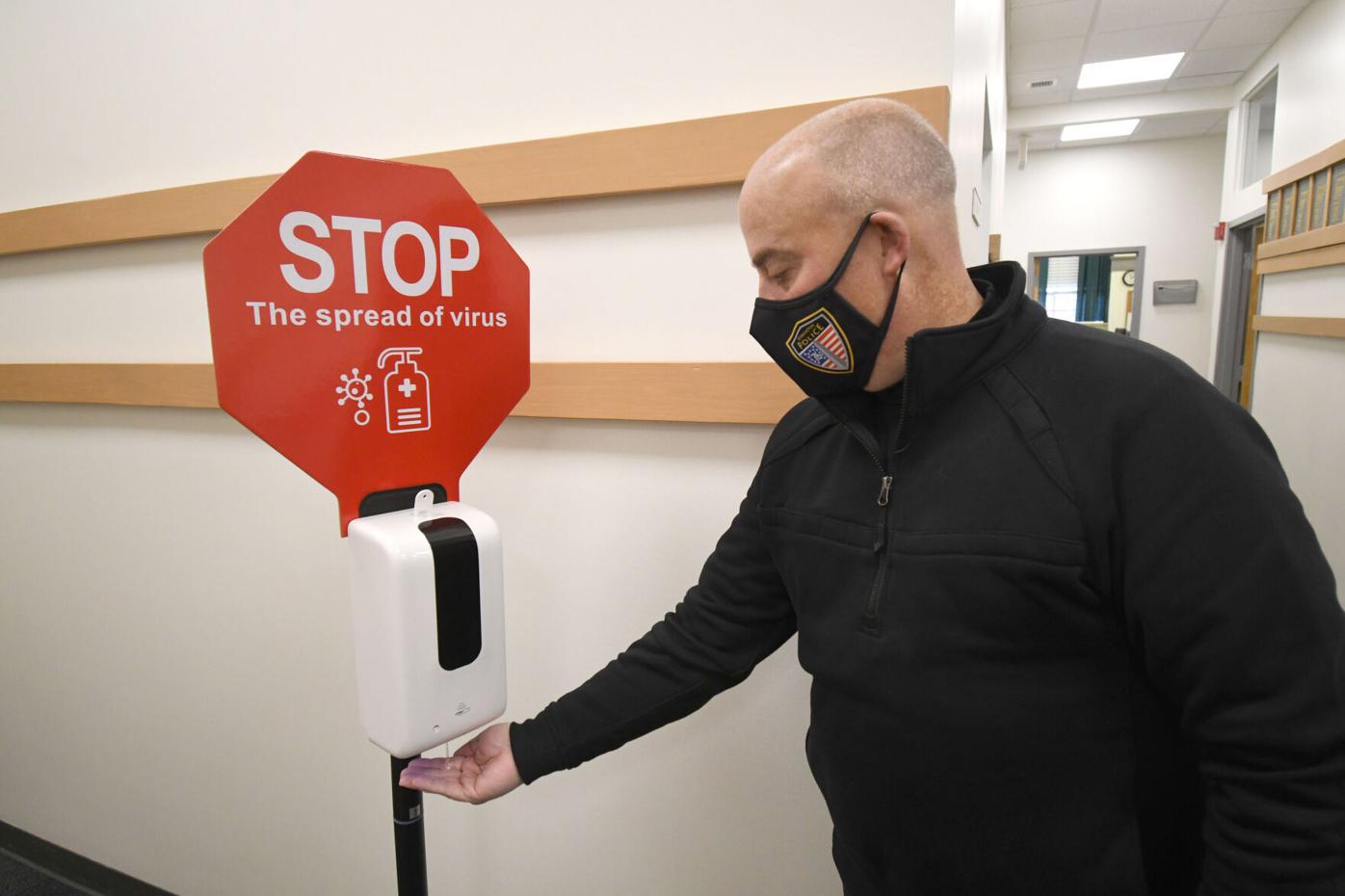 Bennington Police Chief Paul Doucette, who has recovered from COVID-19, demonstrates one of the touchless hand sanitizer units in the station. 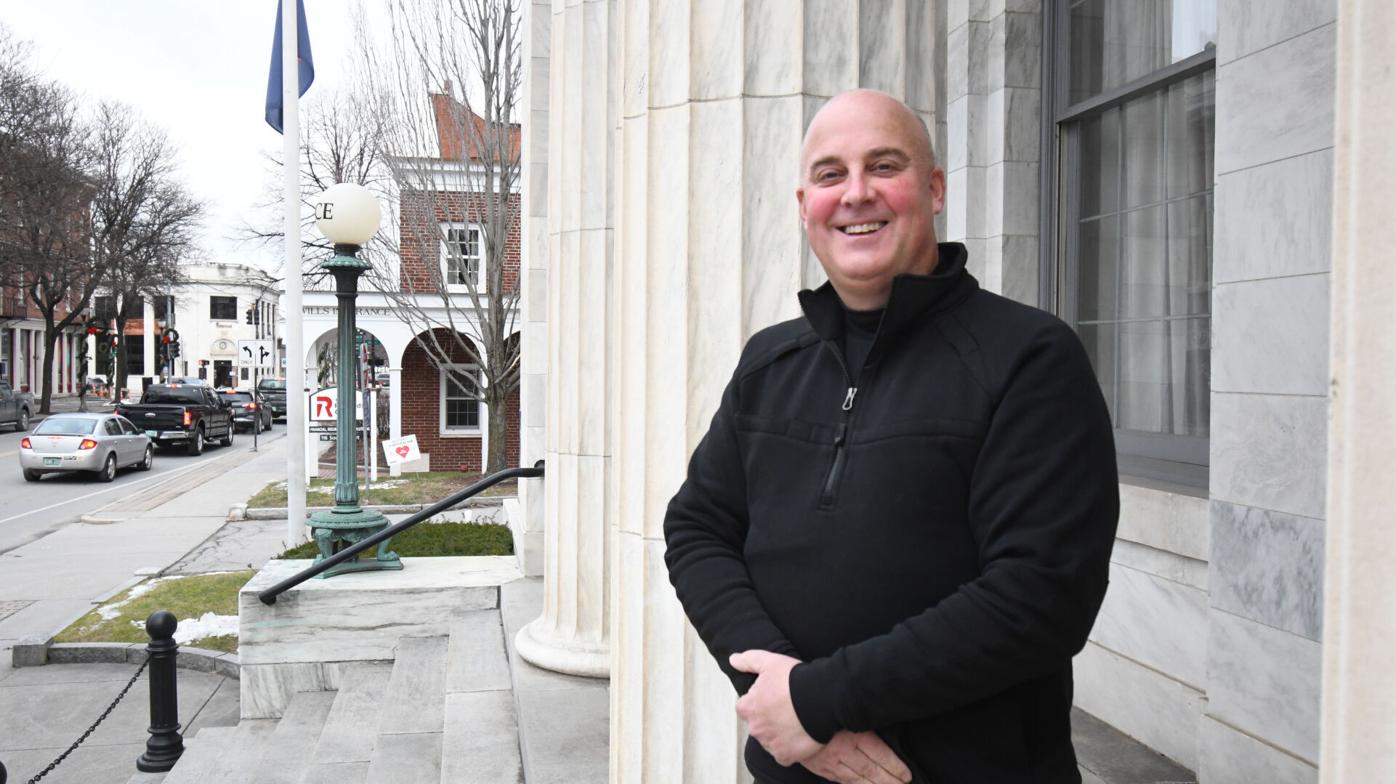 Bennington Police Chief Paul Doucette is recovered from COVID-19 and back at work.

Bennington Police Chief Paul Doucette, who has recovered from COVID-19, demonstrates one of the touchless hand sanitizer units in the station.

Bennington Police Chief Paul Doucette is recovered from COVID-19 and back at work.

BENNINGTON — As they and three other members of the Bennington Police Department return to work after recovering from COVID-19, and the rest of the department starts receiving vaccinations, Chief Paul Doucette and Lt. Camillo Grande are urging the community to take the pandemic seriously.

“I will tell you that COVID-19 is real,” Doucette said in an interview at the police station on Wednesday, his third day back at work.

Doucette; Grande, the department’s second in command; three other officers, and one civilian employee developed COVID-19 in mid-December. One, who has not been publicly named, remains hospitalized, and the remaining five have returned to work.

The chief said contact tracing revealed that five had been exposed to the coronavirus by a sixth employee who was not showing symptoms. Although all employees had followed the proper protocol, wearing masks, washing hands and staying 6 feet apart, officials believe the virus was transmitted through the sharing of a computer for a remote hearing.

“Obviously, it was one person in the room at a time. But the room is small, and the door had to be closed,” he said. It’s possible that a surface — perhaps the arms of the chair — didn’t get disinfected between uses, and that users became infected by rubbing their eyes or touching their noses after coming in contact, he said.

“You know, perhaps we should have used a bigger room, I don’t know — we can Monday-morning quarterback. But that’s how this happened,” Doucette said.

Doucette said he was exposed to COVID-19 on Dec. 14, and started displaying symptoms three days later. At first, he shrugged it off as bronchitis, but developed chills and a fever of 102.5 on the night of Dec. 17.

When another employee tested positive for COVID-19, he went for a test, which also came back positive. That led to two weeks of isolation at home and monitoring of symptoms.

In the meantime, all employees who had had contact with the infected employee were directed not to report to work until they had been tested. “The biggest thing for me in all of this was being so worried about the people that were sick, and making sure that we stopped the spread of COVID,” Doucette said.

With the help of the Vermont Department of Health and the Bennington human resources department, the BPD was able to notify all those who needed to quarantine.

“People monitored themselves, people paid attention to it, because people were scared,” he said. “The COVID virus impacted people differently here. I’m not going to get into names of other people, but some had flu-like symptoms and moved through it very well.”

He, however, did not.

“I could not shake the fever. I struggled with it,” he said. “There were times when I felt like someone had taken a ratchet strap and just wrapped it around my chest. I just couldn’t get a deep breath, and it was very scary for me.”

He isolated for 12 days at home, watching television, reading and trying “to focus on the positive things,” he said. Although his wife followed recommended precautions, leaving his meals outside his door and wearing a mask and gloves, she, too, developed COVID-19, Doucette said.

Grande said that his son, who was home from college, isolated in the basement of his home, and still ended up testing positive for the virus.

“My family was obviously affected, and it was a long two weeks. It was a scary two weeks,” he said. “You know, people need to understand that this stuff is contagious. I would not want anybody to go through our experience.”

In the absence of its top two officers, the department stepped up, Doucette said. “Our sergeants really stepped up and took control,” he said. “You know, my phone rang multiple times a day, as did Lt. Grande’s. We were in constant communication with our people here in order to make sure that the department flowed flawlessly. And that we were able to provide a high level of service to this community.”

He credited members of the department who canceled days off and rearranged their work schedules to make sure that all shifts were fully staffed, and thanked the Bennington County Sheriff’s Department and Vermont Fish and Wildlife for offering to step in if needed.

Doucette also thanked members of the community for their expressions of concern and support, and for the food that was spontaneously dropped off at the police station.

As of Monday, members of the BPD began receiving COVID-19 vaccines at Southwestern Vermont Medical Center. Doucette expects that most of the vaccinations will be completed in about a month.

Although vaccinations are not mandatory, Doucette says he knows of only one member of the department who’s “on the fence” about getting the shots. “We are working towards 100 percent compliance here,” including not only law enforcement officers but dispatchers as well, he said.

Doucette is working half-days for now, and has been told that a complete recovery might take months. He and the other five who were infected must wait 70 days to receive their vaccinations. He intends to keep wearing his mask, keeping his distance, washing his hands and following all the other recommended steps to stop the spread of the virus.

With the availability of vaccines, “If we do this right, this summer, we’ll be able to get back to family barbecues and things like that. And, hopefully, hopefully we can get back to some normalcy with our families and our friends and people will feel better,” Doucette said.

“I don’t want anybody to go through what I went through.”

David LaChance can be reached at dlachance@benningtonbanner.com.