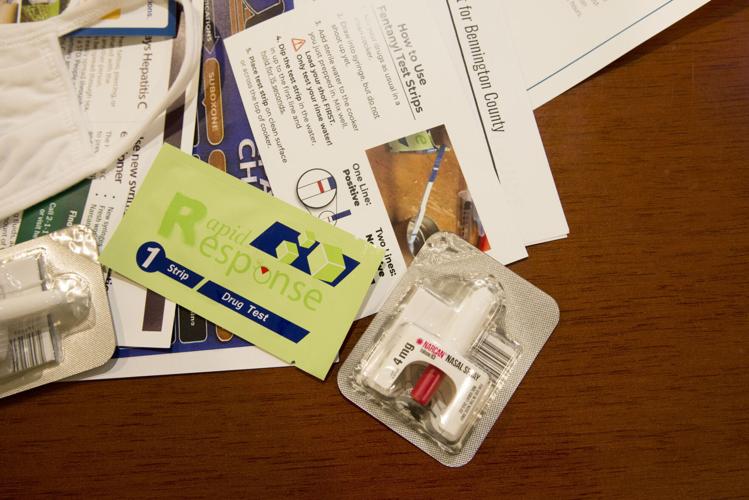 Fentanyl test strips and Narcan, from kits assembled by Turning Point in Bennington. 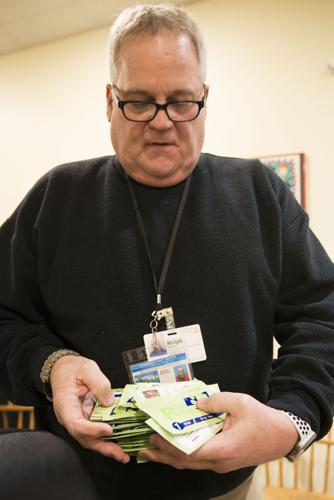 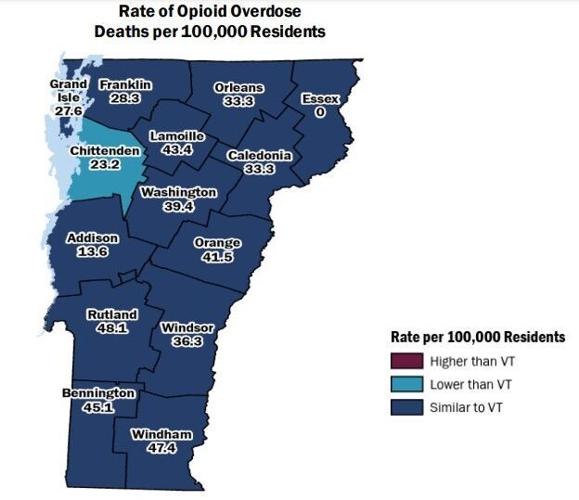 A map from the Vermont Department of Health shows the rate of overdose deaths per 100,000 in 2021. Windham and Bennington counties had the second and third highest rates, respectively.

This chart from the Department of Health shows the rapid growth of fentanyl as a cause of overdose death in Vermont.

Fentanyl test strips and Narcan, from kits assembled by Turning Point in Bennington.

A map from the Vermont Department of Health shows the rate of overdose deaths per 100,000 in 2021. Windham and Bennington counties had the second and third highest rates, respectively.

This chart from the Department of Health shows the rapid growth of fentanyl as a cause of overdose death in Vermont.

BENNINGTON — Vermont set a record for opioid overdose deaths in 2021, and that unwelcome trend hit Bennington and Windham counties hard.

According to figures released by the Department of Health, 16 residents of Bennington County and 20 residents of Windham County were among the 210 Vermonters who died from opioid drug overdoses in 2021.

Public health and recovery experts say the increasing presence of fentanyl in street drugs — including cocaine, heroin and black market pills — has driven the sharp increase in overdose deaths.

A staggering 93 percent of the state’s 2021 opioid overdose deaths involved fentanyl. And 46 percent involved a combination of fentanyl and cocaine, the Health Department said.

A man-made opioid developed to treat pain in cancer patients, fentanyl is 100 times more potent than morphine and can be lethal in relatively small doses. It slows the frequency and depth of breathing, meaning the body can’t get enough oxygen or eliminate carbon dioxide.

As for the high incidence of cocaine in fatal overdoses, Kelly Dougherty, the deputy commissioner of health, said the use of stimulants such as cocaine has been on the rise in recent years.

“But the scary thing is people may not think their cocaine is going to have fentanyl in it. So it was disheartening to see half of overdose deaths for 2021 involved cocaine with fentanyl,” she said. “We’re really seeing fentanyl blanket the community.”

That’s why experts agree: Users should carry naloxone or Narcan, drugs that can reverse the effects of opioids and save lives.

“One thing I’d like to say very loudly: Without the Narcan program running [the overdose rate] would be much higher,” Ralph Bennett, the emergency department director of Turning Point Center of Bennington, said Friday.

“I’ve gone to the emergency department [at SVMC] to do an assessment of someone who’s there from using cocaine, and when they do toxicology test it comes up fentanyl,” Bennett said. “That’s the world we live in right now.”

Earlier this week, federal authorities arrested John Pena Baez in Bennington, charging him on one count of knowingly selling heroin and fentanyl and two counts of selling fentanyl. He was scheduled to be arraigned on Friday in U.S. District Court in Burlington. Bennington police believe he is connected to a Main Street apartment building they raided early Thursday morning, making seven arrests.

At the Statehouse, Sen. Dick Sears, who chairs the Senate Judiciary Committee, said Friday he is expecting a proposal from state’s attorneys addressing laws regarding fentanyl. The committee is considering H. 504, a bill which reclassifies a number of drug offenses and passed the House this week.

“We’re dealing with it at the back end and the problem is we need to do more to prevent drug use and do more on the treatment end,” Sears said.

“But we also need a rational policy regarding fentanyl. So we’re planning on hearing from the state’s attorneys this [coming] week and see what they have to offer.”

The harm reduction kits available at Turning Point include naloxone and fentanyl test strips. They are available for free.

But Bennett said he’s observed the fentanyl test strips aren’t being widely used. The time it takes to test a substance is often not time users want to spend waiting when they want or need to get high, he said.

Bennett said Turning Point has worked closely with Bennington Police, and has been supportive when its counselors are called to the scene of an overdose. “We have a good working relationship with them,” he said.

The isolation experienced during the COVID-19 pandemic also contributed, with people self-medicating and using alone — a practice experts warn is potentially deadly.

That isolation also compounded the stigma people with substance use disorder experience — from others, and in the mirror. This stigma keeps people from getting help, and can lead to using alone, with fatal results.

Dougherty said the Health Department has done an information campaign with Vermonters telling their stories of recovery. “We’re really putting the message out there this is not something to be ashamed of ... that recovery is possible. We’re trying to get over those perceived ideas that people have about substance use and people who struggle with SUD.

“This is an area we can keep digging into more,” she added. “If you feel ashamed because of SUD you’re less likely to access treatment and less likely to recover. ... We need to start presenting this as an illness.”

Bennett said more attention should be paid to the victories being won by people with substance use disorder. “There’s good work being done by good people who care,” he said.

Dougherty said she could only speculate as to why the state’s southern counties were hard-hit by overdose deaths in 2021. But the state is focusing resources here to address the troubling trend, she said.

The department received a grant from the U.S. Centers for Disease Control and Prevention to reduce overdoses, and it’s using that funding in Windsor, Rutland, Windham and Bennington counties, she said. The funding is being used to address barriers to treatment and bridge gaps in communication and outreach.

The Southwestern VT Health Care Opioid Response Team in Bennington and Health Care and Rehabilitation Services in Brattleboro are among groups working with the department in that effort, she said.

The state has stepped up anti-overdose efforts in other areas, Dougherty said.

“All Vermont hospitals can provide rapid access to medication and treatment,” Dougherty said. An ER patient who arrives due to an overdose, or discloses about using, can get started on medication — “enough to bridge to when they can get a full evaluation and into the hub and spoke system,” she said.

• Out of 236 fatal non-suicide drug overdoses among Vermont residents in 2021, 210 – 89 percent – involved opioids. The remainder were related to stimulants, alcohol, huffing or prescribed medications.

•  Cocaine was involved in 48 percent of all opioid-related fatal overdoses.

•  A combination of cocaine and fentanyl was involved in 46 percent of all opioid-related fatal overdoses.

• The average age of death was 41 and the median age was 40. Fifty-six percent of opioid overdose deaths occurred among persons between the ages of 30 and 49.

In light of the increase of opioid overdose deaths, Kelly Doughery, the Vermont Deputy Health Commissioner, offered a number of harm reduction tips as part of the department's "Know OD" campaign.

• Carry naloxone or Narcan, and know how to use it.

• If you're using, start slowly and test the strength. Use fentanyl test strips.

• Use new syringes to prevent cross-contamination and infection.

• Know the signs of an overdose, and call 911 if you see them. Vermont has a "Good Samaritan" law, meaning if you are in the presence of someone overdosing and call 911 you will not be prosecuted for possession or being in a place where drugs are being used.