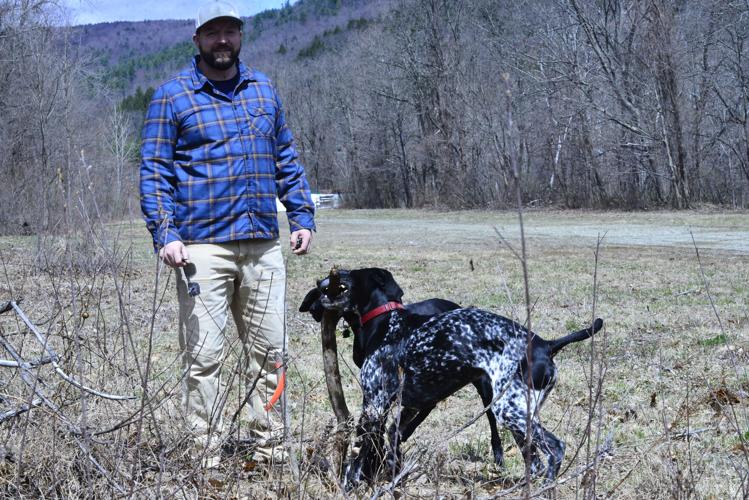 Keane Aures stands near a marker in the parking lot of Maple Valley where a 100-foot buffer to the West River would extend. Such a buffer, he said, would mean no overflow parking for Sugar Mountain. 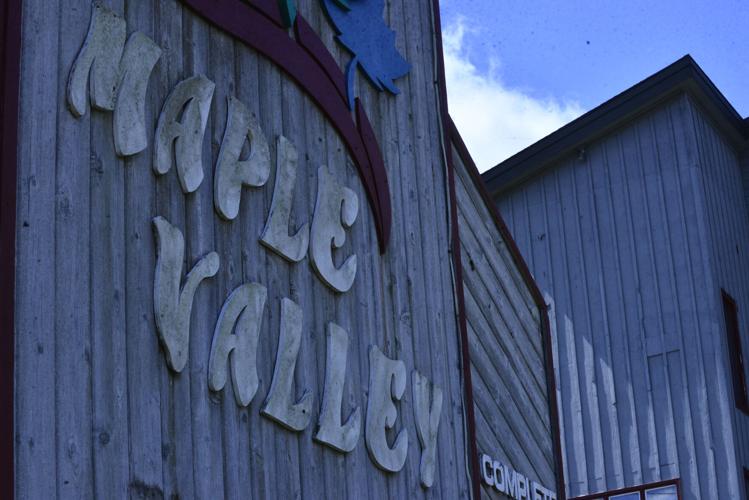 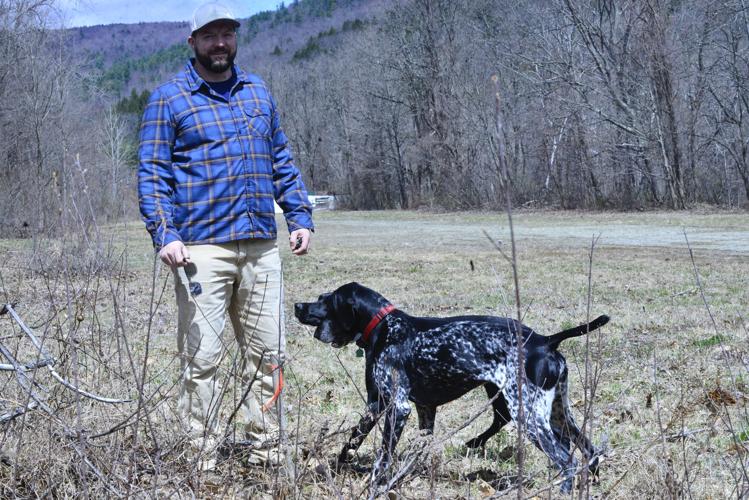 Keane Aures stands near a marker in the parking lot of Maple Valley where a 100-foot buffer to the West River would extend. Such a buffer, he said, would mean no overflow parking for Sugar Mountain, his planned distillery and brewery.

Keane Aures stands near a marker in the parking lot of Maple Valley where a 100-foot buffer to the West River would extend. Such a buffer, he said, would mean no overflow parking for Sugar Mountain.

Keane Aures stands near a marker in the parking lot of Maple Valley where a 100-foot buffer to the West River would extend. Such a buffer, he said, would mean no overflow parking for Sugar Mountain, his planned distillery and brewery.

DUMMERSTON — There are a lot of people in the tri-state region who remember skiing at Maple Valley before it closed in 1987.

One of the eminences grises of Act 250 law in Vermont told me about skipping school to go skiing there with his dad and how precious that memory is.

Decades later, Van Oot is representing the new owner of the lodge, Keane Aures, and the 380 acres it sits upon along Route 30.

It’s Aures’ hope to open a brewery, distillery and tasting room, and host several large events a year, including weddings and musical acts.

And like so many things in Vermont when it comes to Act 250 approval, it’s this close to being a done deal.

There’s this one little detail that seems to be holding everything up: a parking lot on the east side of Route 30 on the West River.

Vermont Fish and Wildlife and the Connecticut River Conservancy have recommended to the three-member Act 250 District Commission, which is tasked with reviewing the application, to condition Act 250 approval on restoring the parking lot as a riparian buffer to the West River.

“It is our opinion, that it is not necessary for the parking lot to be located at the top of the slope of the West River because there are 380 additional acres where parking could be located,” wrote Leal Will, a fisheries biologist with Fish and Wildlife, in a March 14 memo to the commission.

“We are supportive of the project, but yes, would like for them to not create a parking lot along the river and instead maintain a 100-foot natural buffer as provided by the Vermont Fish and Wildlife guidance,” wrote conservancy river steward Kathy Urffer in an email to the Reformer.

“There is a great opportunity here for the applicant to enter our small community in a way that shines a bright light on the benefits that they bring to the region,” wrote Urffer in comments submitted to the commission.

“We’d love to have this place be something that the community is proud of, that my family is proud of,” Aures, a father of two preschoolers, told me during a visit to the parking lot and lodge. “If this wasn’t a passion project, I would have been out a while ago.”

Aures is senior counsel in the Hartford, Conn., office of Gordon & Rees and is a member of the construction and environmental/toxic tort practice groups. He has family in Wilmington and has been travelling to Vermont to ski since he was a kid.

As he got older, he often passed the vacant Maple Valley on the way to Stratton and dreamed about doing something there. Over the years, his wife, a fellow at MassGeneral for Children in Boston, urged him to stop talking about it and just do it.

According to New England Ski History, in 1963, Dummerston native Terry Tyler, who died in 2010 at the age of 78, opened Maple Valley Ski Area with the help of brothers Angelo, Joe and Frank Pirovane of North Haven Construction Co.

Aures doesn’t strike me as some slick city lawyer many of us have grown to righteously fear. My impression of him is that he is, in the words of Joe Walsh, “an ordinary, average guy,” albeit with a chunk of money he’d like to invest in Windham County.

When I met him, he was tossing a stick to one of his dogs and making sure his other dog didn’t wander too far. He had a pair of new waders he was itching to try out in the river. Sometimes it takes a bit of a dreamer to breath new life into an old relic, but it takes spending a bit of ching on engineers, attorneys, and environmental and sound consultants before you can even swing a hammer.

In December 2019, Aures easily received approval of his plans from the Dummerston Development Review Board.

“The DRB was very much in favor of the project, which met all our zoning requirements,” said Alan McBean, chairman, who grew up skiing at Maple Valley. “It was the social hub for kids in Dummerston and Newfane.”

McBean said it seemed “a little odd” that Aures has been receiving grief over a parking lot that has been there for going on 60 years, a parking lot that will only be used for 24 events a year and for overflow parking during the summer and foliage seasons.

Aures said eliminating overflow parking in the lot along the river would mean people might have to park along the highway, like they do at the nearby swimming holes just upriver from the lodge. He said that’s just not acceptable on a road where the speed limit is 50 mph.

And he said expecting him to excavate a ski slope for parking on the west side of the former lodge would not only be prohibitively expensive, it would cause its own damage to the environment.

“The east lot has remained in its current condition as a gravel parking lot for over five decades and likely would not significantly change in the absence of this project,” wrote Sabetto. “It would be an improvement for the applicant to make permeable and revegetate a portion of the east lot in the buffer of the West River. ... Considering the benefits that this project would have for the region, we hope that a reasonable solution would be the goal of both the Vermont Fish and Wildlife Department and the applicant in renewed conversations about the east lot.”

The Connecticut River Valley Chapter of Trout Unlimited doesn’t necessarily oppose the project either, at least with some conditions, including removal of an old storage tank and a berm to allow the West River “quicker access to its flood plain,” according to comments submitted by David Deen, a former legislator from Westminster and former river steward for the Connecticut River Watershed Council, now the Connecticut River Conservancy.

Trout Unlimited agreed that a 100-foot buffer should be a minimum, but it would be satisfied with a settling pond for runoff from the west side of the river, fewer parking spots and a swale in the parking lot to keep runoff from washing into the river, Deen told the Reformer.

Van Oot, who opened the Brattleboro office of Downs Rachlin and Martin in 1992 and specialized in environmental law and Act 250, semi-retired in 2018, opening a one-man legal firm on Cape Cod. He said Sugar Mountain’s riparian management plan for the parking lot has gone “beyond Act 250” in addressing everyone’s concerns.

“The width, condition, quality and diversity of available habitats within the riparian buffer of the West River will be improved and enhanced as compared to the existing conditions,” he told me. “And the water quality of the West River will not be degraded or further impacted in any way by the project. We believe we’ve addressed every issue under Act 250.”

But now, another obstacle and another expense. On April 19, Aures received a letter from the District 2 Commission requiring a sound study, which was submitted on April 29, different from the one submitted with the initial application.

This noise study requires maximum levels that might be reached at nearby residences during an outdoor event, such as a wedding or concert.

“The commission was not persuaded by the applicant’s testimony at the hearing that the information is not necessary for this application,” states the letter.

As with most people in this neck of the woods, I consider myself an environmentalist and believe Vermont has done its best to balance development with the preservation of all those things that make the Green Mountain State green.

I am also thankful for the nongovernmental organizations that work diligently to do their part in conserving land and protecting the watersheds of the West, the Green and the Deerfield rivers.

But anyone who has driven along Route 30 sees there is pretty much no buffer between the road and the river. Sure, we all want to see every little bit returned to as close to pristine as possible, but in reality, what difference would this little parcel make in the big scheme of things? Will other parcels along the river be rehabilitated? It’s unlikely because really, there’s nothing to rehabilitate.

You can’t keep talking about bringing businesses to Vermont and then keep throwing obstacle after obstacle in their way. Common sense reforms to Act 250 need to be made.

I hope Aures and the state can reach a resolution. I and many other people would love to see that hulk along the river repurposed and hopping with activity, bringing more people and their money, to town.

I’d hate for my kid to see Maple Valley sit vacant for another 40 years, but if it does, I have a feeling Aures will still be around, fishing in the river and hiking on the old ski mountain with his dogs, his kids and wife, and eventually their grandkids.

Meanwhile, people will continue to drive by Maple Valley. Some of them will dream, some will reminisce, but most of them won’t spare it a second thought.