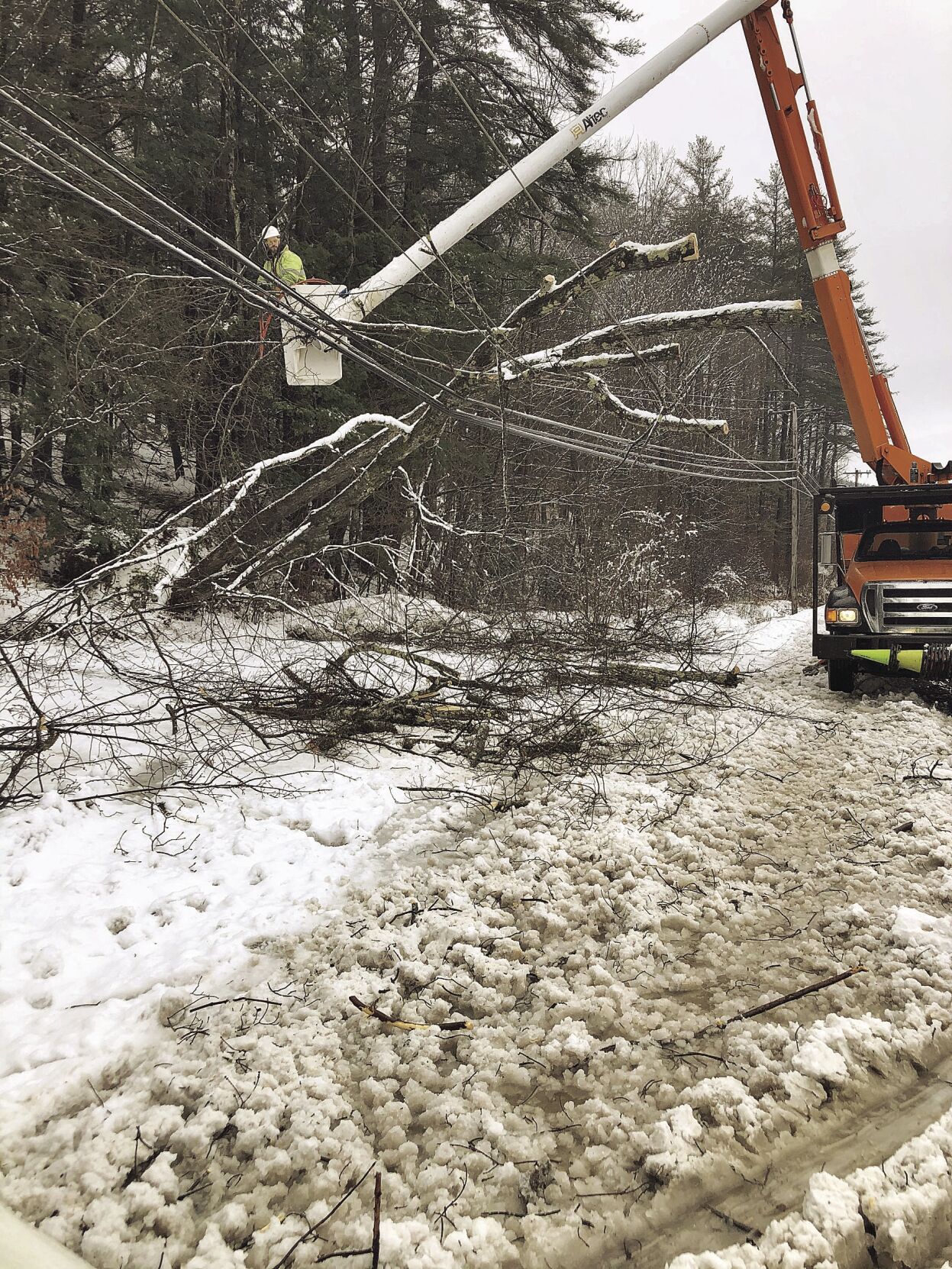 Four power poles were broken on Route 9 in Brattleboro, two by a single large tree coming down and blocking the road.

Lori Wood took this picture of trees and wires down on Marlboro Road (Route 9) in West Brattleboro on Saturday morning.

Four power poles were broken on Route 9 in Brattleboro, two by a single large tree coming down and blocking the road.

Lori Wood took this picture of trees and wires down on Marlboro Road (Route 9) in West Brattleboro on Saturday morning.

Kristin Kelly, spokeswoman for Green Mountain Power, said the storm hit most of Vermont with heavy and wet snow that came in wetter and heavier than forecasted.

“The Brattleboro area was really where we saw most of the damage and there was significant damage with trees taking down powerlines and blocking roads,” she said at about 11 a.m. Sunday. “So the conditions have been challenging for crews and they’re still going.”

“We doubled our field force in preparation for this storm, and crews worked through the night and are still going,” she said.

She also warned that downed lines can be live and downed trees can have wires in them.

The fire department had a steady flow of storm-related calls coming in over the weekend.

“Everything for the most part is cleaned up,” he said at about 10:35 a.m. Sunday. “There’s still a few branches and wires down. Most of those are telephone or cable so they’re not power.”

Crews from Comcast and Consolidated Cable were still out making repairs at the time of the interview, Keir said. He noted there were no major calls involving fire.

At about 10:30 a.m. Sunday, Brattleboro Public Works Director Steve Barrett said all the roads in Brattleboro were cleaned up.

“We’ve been in pretty good shape,” he said, “although the snow is very wet so it’s very difficult on the equipment and it just takes longer to get through the plow routes.”

In a news release issued Saturday morning, GMP urged “safety for customers as crews work to restore power and forecasters predict that more heavy wet snow will continue to pile up across much of Vermont, especially the south and central regions of the state.” Winds were forecasted to be “high enough to cause outages into the afternoon increasing the possibility for toppling trees which could tear down lines, causing more outages,” the company said.

“We track the weather for days leading up to an event like this so we can respond safely and quickly for customers. Crews were ready and have been working since the first outages started early this morning and they will continue as we expect more outages through today,” Mike Burke, chief of field operations for GMP, said in the release. “The snow is wet, heavy and slippery which makes travel and restoration conditions tough.”