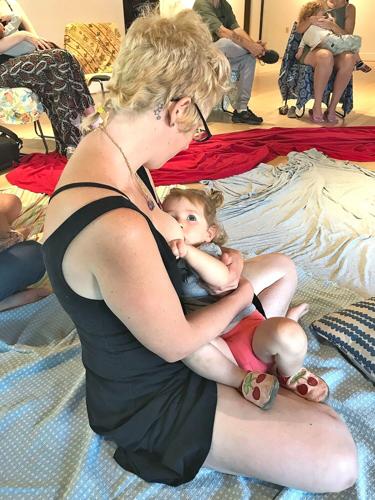 Eden Love, of Brattleboro, participates in the Global Big Latch On at 118 Elliot on Sunday, Aug. 5. 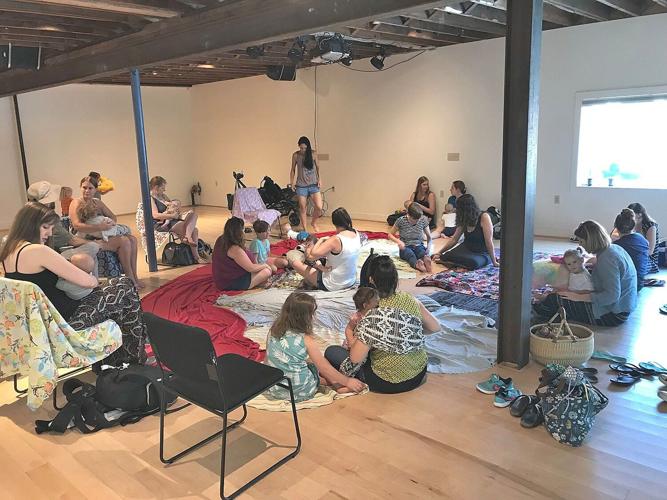 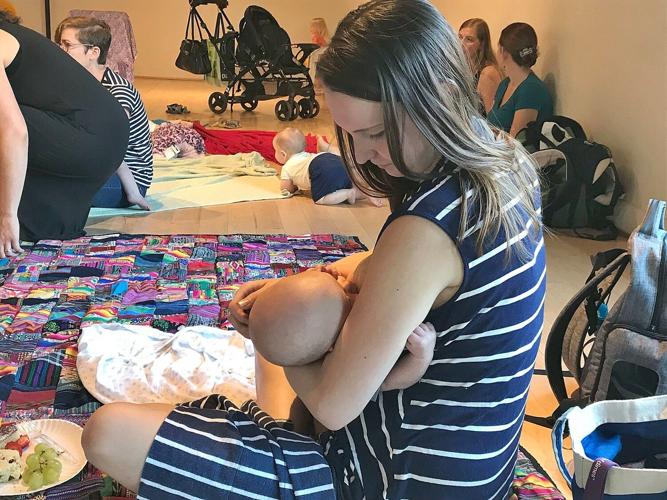 Sarah Charlonne, of Brattleboro, participates in the Global Big Latch On at 118 Elliot on Sunday.CHRIS MAYS BRATTLEBORO REFORMER

Eden Love, of Brattleboro, participates in the Global Big Latch On at 118 Elliot on Sunday, Aug. 5.

Sarah Charlonne, of Brattleboro, participates in the Global Big Latch On at 118 Elliot on Sunday.CHRIS MAYS BRATTLEBORO REFORMER

BRATTLEBORO — As part of the Global Big Latch On Sunday at 118 Elliot, 23 local "latches" were counted toward the worldwide total of people breastfeeding in unison during three minutes this month.

"This is so awesome. I love this," said Deb Kitzmiller, of the Vermont Department of Health. "We hope that today feels like a little bit of a treat for you because we know that it's not easy to do what you do."

Sunday's event saw participants sign in, then at 10:30 a.m. organizers counted "latches," which according to the official rules can mean using a supplemental nursing system or nipple shield, expressing milk by hand or pump, or feeding a child breast milk through an alternative method.

The "latches" were all counted during a 60-second stretch. Communities could choose to hold events Aug. 3, 4 or 5.

Erin Fagley, of Brattleboro, said the event started in New Zealand in 2005 and it has been organized in Portland, Ore., since 2010. Multiple locations in Vermont participated.

The goal was to break the record: 17,992 children at 758 locations. That's "a lot of kids," said Fagley, who helped coordinate the local event with Kitzmiller and Erin Scaggs, an owner of Elliot Street Fish, Chips & More.

Fagley said the event is about community development and identifying opportunities for ongoing support. She found "huge challenges" when she first started breastfeeding her son, who is now 6.5 months old.

Fagley's son had tongue tie, which is described by the Mayo Clinic as a condition present at birth where "a short, tight band of tissue tethers the tongue's tip to the floor of the mouth."

Fagley said the condition makes it difficult for children to latch on for breastfeeding. She said her son was not gaining any weight. She worked with lactation nurses from Winston Prouty Center for Child and Family Development, Sally Pennington and Jean Vulte, who will make home visits.

Valentine previously worked as a lactation counselor. She said events like the Big Latch On are important to build community and reduce stigma around breastfeeding. She called breastfeeding important for family and child development as well as nutrition. She came to Sunday's gathering with her 7-year-old daughter to show support.

"This is a great turnout actually," she said. "You never really know with these events who's going to come."

Eden Love, of Brattleboro, said she attended "just because this is totally part of my life."

Breastfeeding, Love said, provides a good start for the child's immune system. It's not just about food, she said, but comfort and reassurance.

Love nursed her 16 month old daughter during the event. She had nursed her older daughter until she was 4 years old.

Sarah Charlonne, of Brattleboro, said she came to spread awareness and "get together with all the other moms and nurse our babies."

Kitzmiller was happy with the turnout.

"We had 70 people say they were interested on Facebook," she said. "We said, before, we'd be happy if 20 people showed up."

Altogether, Brattleboro had 61 attendees. The event was sponsored by the Maternal and Child Health Coalition in Windham County, Winston Prouty and the Department of Health.