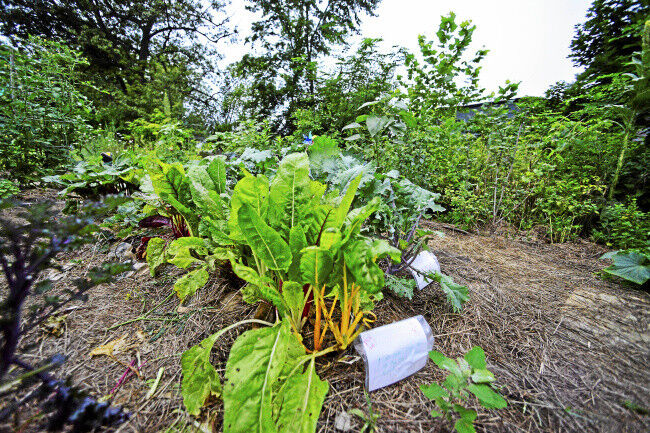 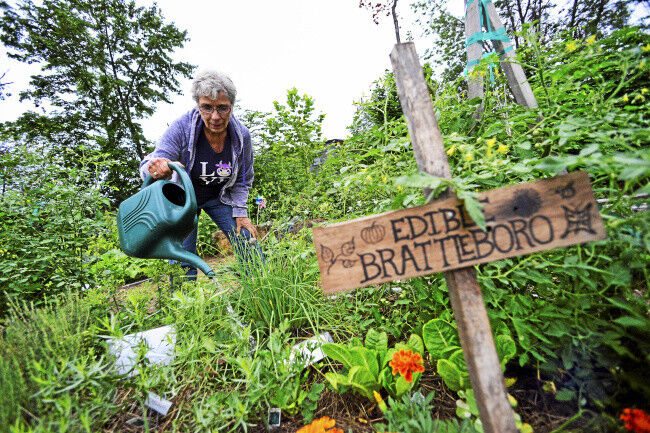 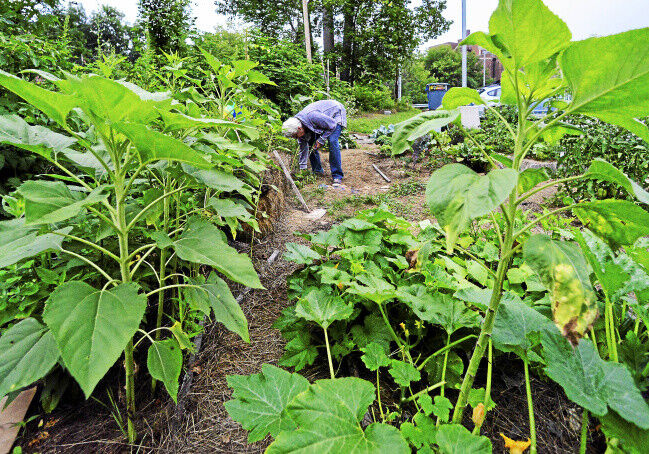 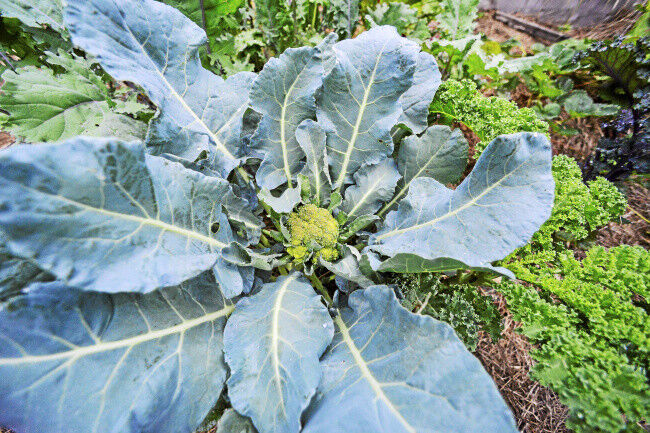 BRATTLEBORO — Tucked behind the busy parking lot of the Brattleboro Food Co-op is a swath of land that runs along the Whetstone Brook. Taking up a small portion of that land is a garden. In front of the garden is a basket with a sign, "Take what you need."

The community garden at the Co-op is one of a handful that make up Edible Brattleboro, a not-for-profit group started by Marilyn Chiarello that has partnered with the Co-op. "We are helping transform the public spaces in Brattleboro into an edible landscape which will provide nourishment and inspire our community," the Co-op says on its public Facebook page.

About a year ago, after seeing Pam Warhurst's TED Talk on the subject, Chiarello was inspired to bring the idea of edible landscapes to Brattleboro. She sent a note to her friend, Tim Stevenson, of Post Oil Solutions, saying they should implement this and his response was, "Sure, go for it!" An email chain was started and once there was enough interest, they approached the Co-op to donate the space.

Originally from Long Island, N.Y., Chiarello moved to Brattleboro a little over three years ago. Originally a teacher, she decided to "re-wire" and move permanently to Vermont. Inspired by Warhurst, she was driven to bring edible landscapes to Brattleboro.

Chiarello coordinates the program and has donated her inheritance from her Aunt Jo to it. Also, sharing her love of her vegan diet, she teaches a monthly cooking class, showing others how to prepare healthy and wholesome vegan dishes using a lot of what is being grown outside, right across the parking lot. Edible Brattleboro has become her baby and it is growing up quickly.

After a slow start and a few hurdles, their first small garden bloomed. This spring several plants showed resilience and survived winter. Donations started coming in of herbs, vegetables, greens, and decorative plants. Slowly, with the help of the community the garden grew.

This summer has had its fair share of challenges, irrigation being the biggest hurdle. This didn't stop them; it, instead, inspired creativity. A large 40-gallon drum sits atop a wooden stand that a volunteer built. A hose runs from the drum and is used to water the expanding garden space. The only trouble with this set up is that the giant drum has to be transported across the parking lot, to the Co-op building, to be filled with water and then brought back to the garden. Not perfect but it is functional.

Additional garden spaces have sprouted up around town. A second Edible Brattleboro garden was put in last year at Turning Point. Other smaller gardens are being grown in front yards of private residences, with baskets of their abundance being put out for anyone in need. "As people start to hear about it, it'll grow," Chiarello said. The group hopes that more people will join them in growing edible landscapes and sharing in the harvest.

This is a vision that the Brattleboro Food Co-op shares.

Jon Megas-Russell, marketing and community relations manager at the Brattleboro Food Co-Op, heard about the project and fell in love with it. He started coming out and helping with the watering and small tasks around the garden. He also created a worker-hour option where co-op members can get their work hours by helping in the garden.

"Also, I am just impressed that we can give food away to people. I don't think it in any way competes with the Co-op and it brings more people here," he said. "We are a business that puts all the profit back into the community, when we can. So, for this to be something long term that we invest more in, and use the Co-op as a community hub, then that is awesome."

He would love to use the harvest in future kids' cooking classes, donate to some of the local schools and potentially see other organizations work together in taking on pieces of an expanded garden.

Working together with the community, Megas-Russell and Chiarello would love to see the garden expand and grow. Fruit bushes and trees, rocks for borders, even milkweed to help the fragile Monarch butterflies. The garden aims to help nurture and nourish everyone. No exclusions. Looking over the growing veggies, Megas-Russell sees some nibbled on tomatoes and Chiarello notices that some small animal had eaten their squash.

"There is an animal that stops by here. I guess they are entitled to eat as well," she says, smiling.

Chiarello and Megas-Russell are hoping to get some funding to add to the garden and create a space that not only grows food but also community spaces to eat lunch under trees and berry bushes to make a natural fence along the brook to help with erosion and safety. The pair would also like to see a covered arbor and bulletin board erected to help keep the community informed. This shared vision for the little garden that started as an idea is becoming an attainable dream to help the community. They are also working on getting some mini grants to help fund gardens on lawns around town.

"We will offer support and at least there will be some money behind it that they (the homeowners) can buy what they need," Chiarello explained.

With dreams that more will join the movement, Chiarello is hopeful.

"I am in debt and have a lot of gratitude for Marilyn and what she has done," Megas-Russell adds. "It is impressive, it is a gift. We are lucky to have people like her in our community."

Edible Brattleboro is accepting donations of plants, seeds, rocks, building materials, and funds. To donate or to become a volunteer email: ediblebrattleboro@gmail.com or find them on Facebook at www.Facebook.com/EdibleB For more information on classes or recieving member hours call Megas-Russell at 802-257-0236, ext. 813, or email bfcmrktg@sover.net.

Michelle Stephens is a writer, wife, mother, dog wrangler, cookie baker, coffee drinker. Stephens is a regular contributor to the Reformer. Read more of her work on her blog at www.JuiceboxConfession.com.