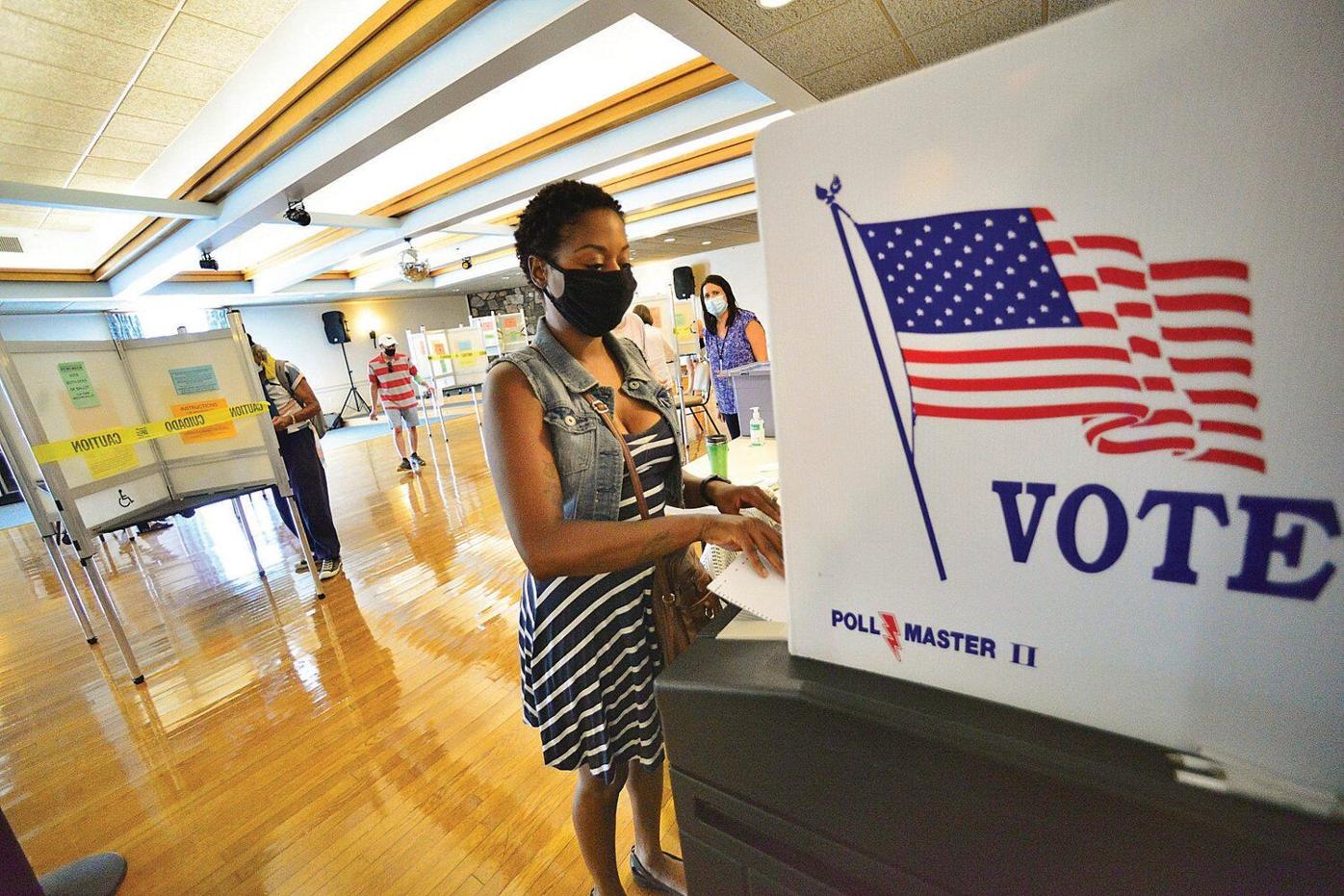 Jamie Cansler, of Brattleboro, casts her ballot at the American Legion during the Vermont state primary election on Tuesday, Aug. 11, 2020. 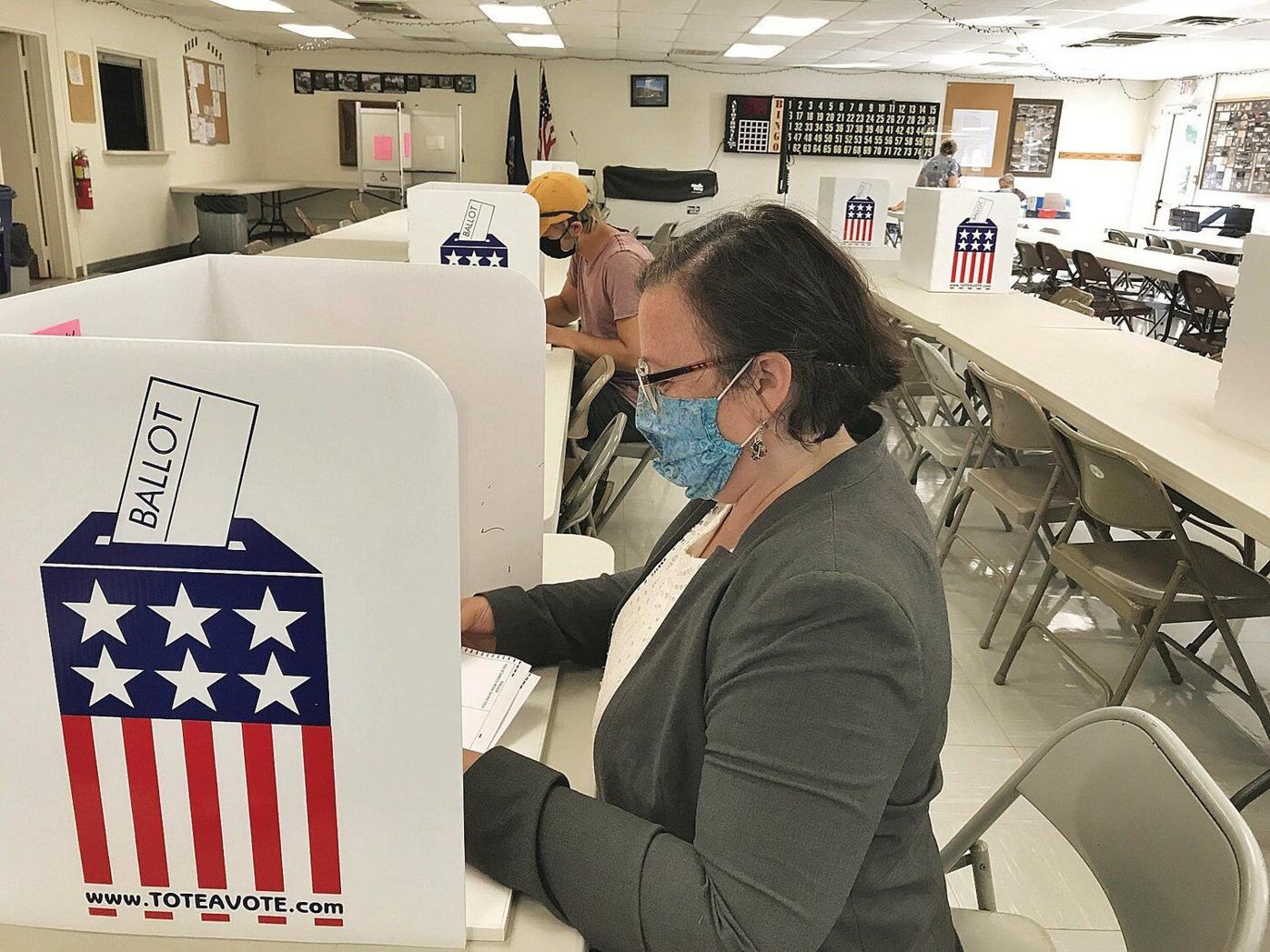 Brenda Siegel, candidate for the Democratic nomination for lieutenant governor, and her son Ajna Siegel vote at the NewBrook fire station in Newfane on Tuesday, Aug. 11, 2020. 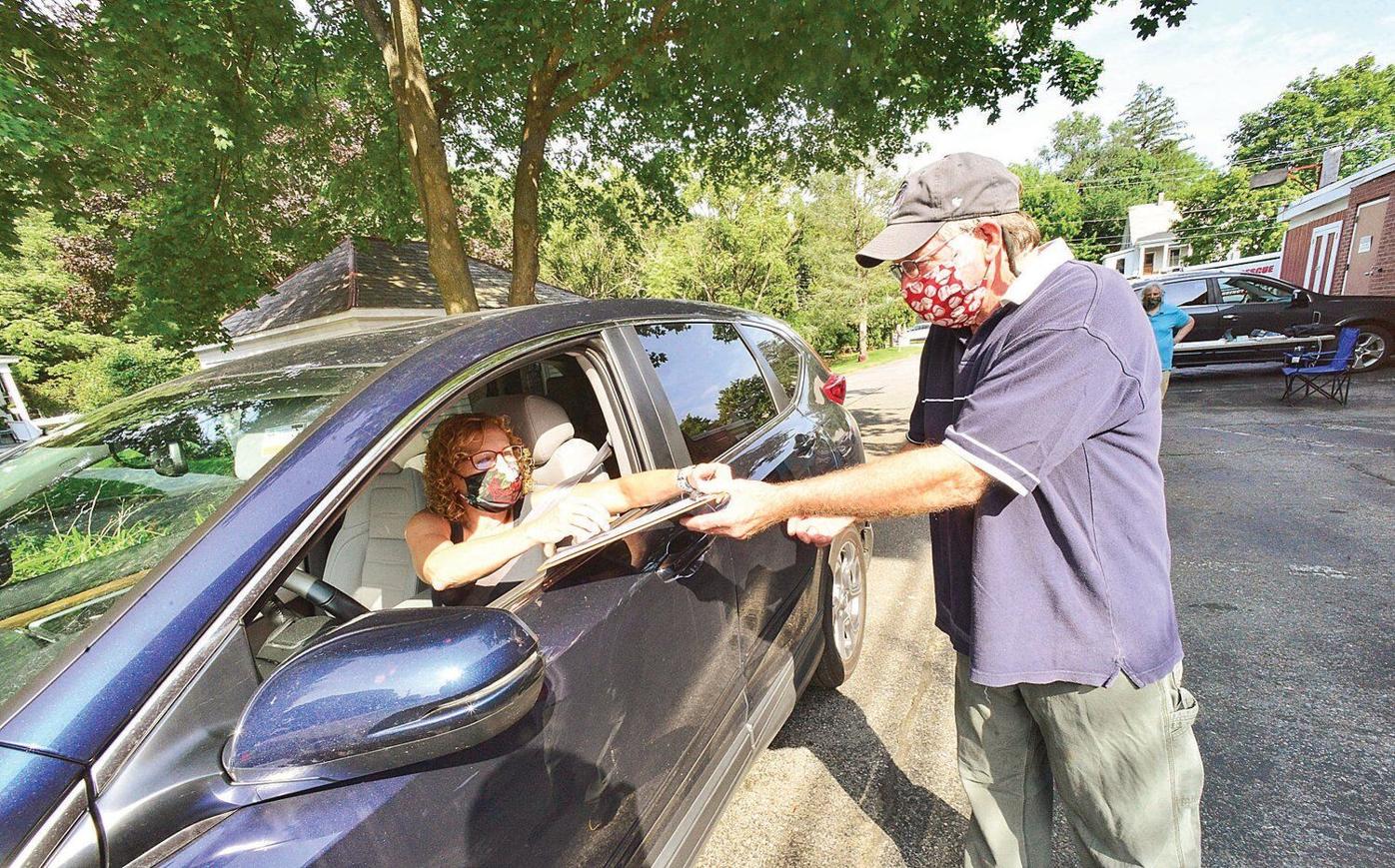 Marsha Austin, of Bellows Falls, gives her ballot to Dennis Harty, a poll worker, at the drive-through polling station behind the fire department during the Vermont state primary election on Tuesday, Aug. 11, 2020. 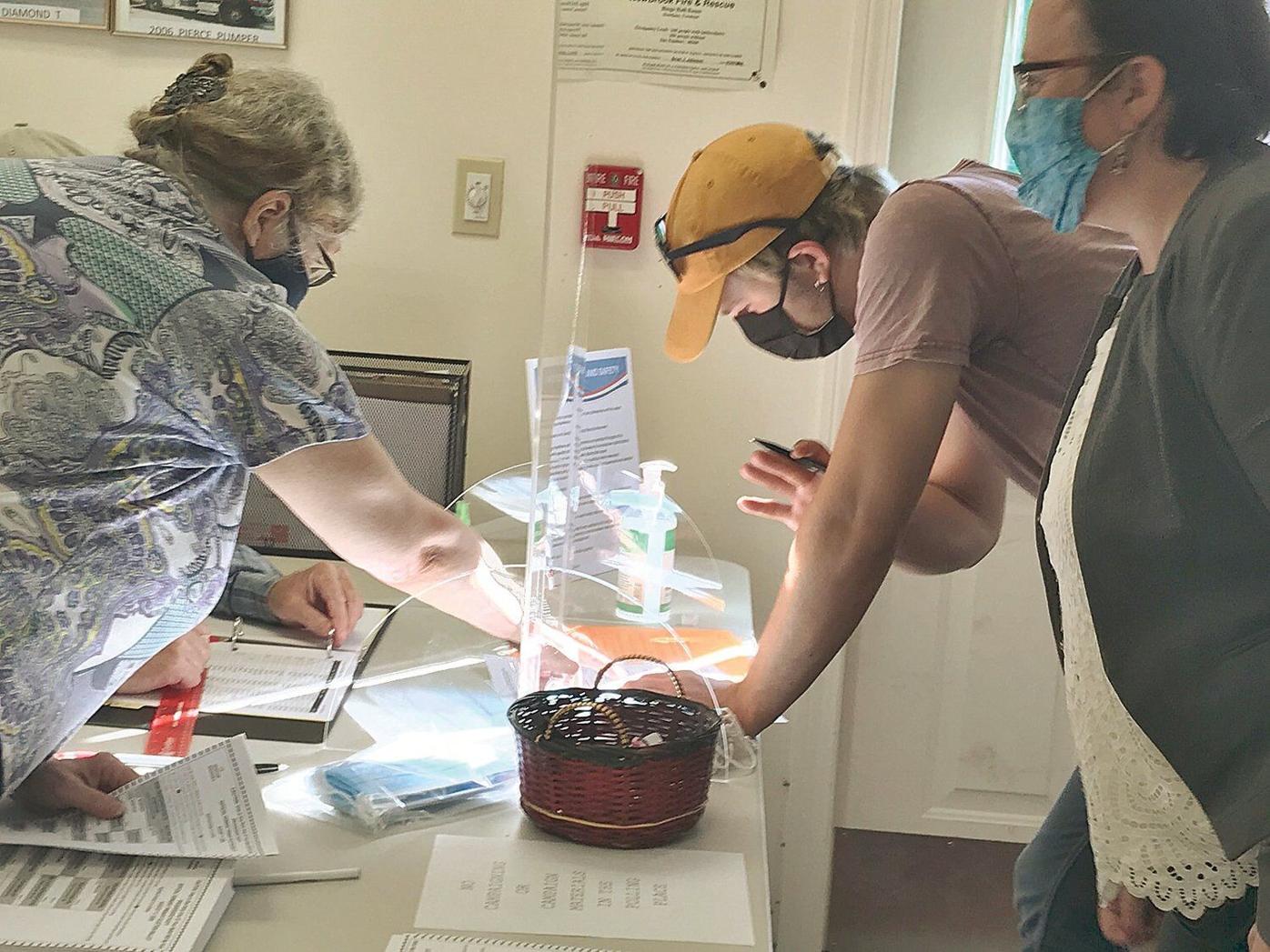 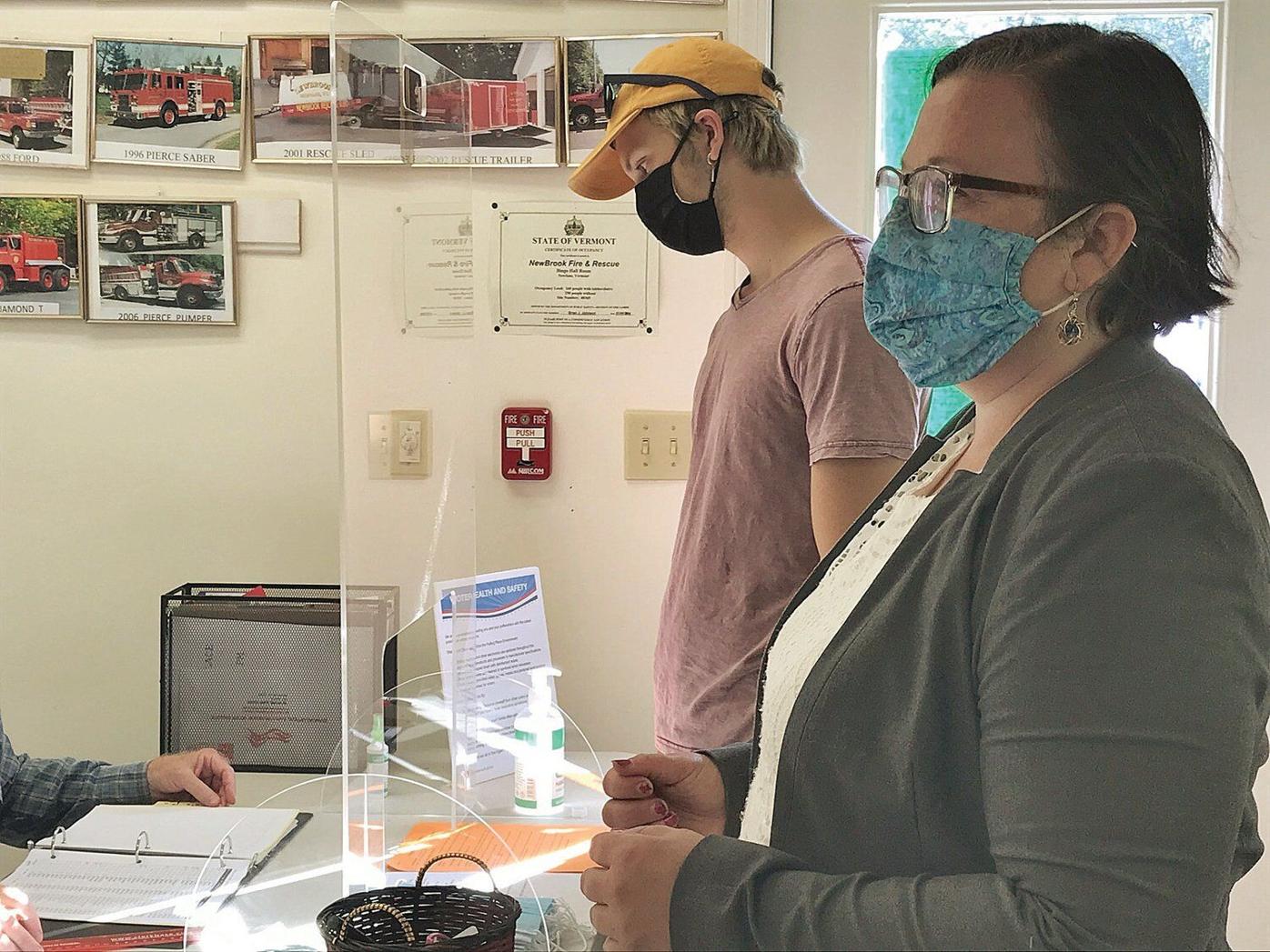 Brenda Siegel, candidate for the Democratic nomination for lieutenant governor, and her son Ajna Siegel prepare to get their ballots at the NewBrook fire station in Newfane on Tuesday, Aug. 11, 2020.

Jamie Cansler, of Brattleboro, casts her ballot at the American Legion during the Vermont state primary election on Tuesday, Aug. 11, 2020.

Brenda Siegel, candidate for the Democratic nomination for lieutenant governor, and her son Ajna Siegel vote at the NewBrook fire station in Newfane on Tuesday, Aug. 11, 2020.

Marsha Austin, of Bellows Falls, gives her ballot to Dennis Harty, a poll worker, at the drive-through polling station behind the fire department during the Vermont state primary election on Tuesday, Aug. 11, 2020.

Brenda Siegel, candidate for the Democratic nomination for lieutenant governor, and her son Ajna Siegel prepare to get their ballots at the NewBrook fire station in Newfane on Tuesday, Aug. 11, 2020.

BRATTLEBORO — Tuesday started off with a record when the town counted 2,425 absentee ballots in its possession as the state primary election began.

That's more than a combination of in-person and absentee ballots in state primary elections in at least the last 14 years, Town Clerk Hilary Francis said.

In August 2018, when turnout had been the highest for a state primary election during that time frame, 2,398 voters participated altogether. That year, 938 voters requested absentee ballots and 911 returned ballots.

During an interview at about 1 p.m. Tuesday, Francis said the polling station was busier than anticipated although it was slower than a normal election day. Poll workers estimated about 229 people had voted in person by that time.

"There was just a line at District 2, which we were not expecting but planned for," Francis said.

State primary elections tend to have less participation, Francis said. But she credited a push for absentee voting for the larger turnout and pointed to the Vermont Secretary of State's sending out postcards and a local campaign involving letters to the editor; social media posts; flyers distributed through the schools, Brooks Memorial Library and with tax bills; and posters that went out to the Brattleboro Area Chamber of Commerce, Downtown Brattleboro Alliance and businesses.

The town's Board of Civil Authority set up an ad-hoc committee to look at how to proceed with the election during the coronavirus pandemic. The group explored whether to move the election outside and how to educate voters about absentee ballots.

Keeping the polling station inside the American Legion was aimed at maintaining consistency for voters. A table outside, where absentee ballots were collected in addition to a drop-off box in the parking lot of the Municipal Center, allowed those who couldn't wear a mask to vote outside. At the time of the interview only about four or five people had voted outside.

With positive feedback about the drop-off box for absentee ballots set up since early voting began, the plan is to continue with the system for the November election. Francis said she's unsure of the legitimacy of concerns about the postal service she's read reports and heard from residents about, but she wants to provide people with reassurance.

Another focus of the ad-hoc committee was on personal protective equipment and allowing voters to participate without touching things. Instead of the traditional "I voted" sticker, they were given No. 2 pencils that say "Town of Brattleboro Thank You For Voting" and could be taken home.

Francis said the board wanted to be as safe and welcoming as possible while prioritizing public health and democracy. She called the American Legion "awesome."

The Legion's baseball team cleared out the room for the polling tables and equipment. In years past, that was something Francis and her crew would do.

Poll workers said people campaigning for candidates came earlier in the day but left because it was too hot outside. Francis said she believes some of them had been "town hopping."

Governor and lieutenant governor races were contested, and Francis noted a lot of campaigning had gone on prior to the election. She said a lot of attention is on national and statewide politics in ways she hasn't seen so much before.

On social media, a voter Francis did not know personally said they felt safer at the polling station than in the grocery store.

"I feel proud of that," Francis said.

Ian Goodnow, a member of the Select Board and Board of Civil Authority, commended Francis and town staff for doing "a great job."

"It's really remarkable," he said.

At the entrance of the Legion, Goodnow and another poll worker told voters which district they live in and pumped hand sanitizer on their hands.

Francis said about the same number of volunteers assisted with the election as in years past — they were "just repurposed."

For example, one person might be cleaning or disinfecting areas. Another was guiding voters to the parking lot as they exited through a back door to a back road.

"It's been pretty slow," said Rick Kenyon, a member of the Board of Civil Authority tasked with directing people to their cars.

Kenyon said he'd been able to eat his entire lunch without a voter leaving the Legion. He expects more in-person voting in November.

For a moment, only chimes and cars could be heard in the background.

"This is the way it's been for seven hours," Kenyon said. "You're seeing it firsthand."

Shabir Kamal of Brattleboro said he didn't come out for any candidate or issue in particular.

Kamal volunteered at the polling station earlier in the day. As a nurse, he said the safety precautions made sense.

Brenda Siegel, one of four candidates for the Democratic party's nomination for lieutenant governor, stopped in her town of Newfane at about 4:30 p.m. to vote and speak with reporters. With no polling and limited in-person interactions due to the pandemic, it was difficult for her to have a sense of how she was doing in the election.

"We definitely have a shot," she said.

Siegel said her campaign leaned into privilege and access issues in politics, stressing the need to engage communities often forgotten or ignored.

"At this moment," she said, "this is the change people are craving. But it really is about moving the needle on issues of access."

Her campaign used Zoom to host meetings and appeared in Facebook Live videos. Siegel said unrelated to the campaign, her team also started a statewide mutual aid program to check in on voters to see if they were OK during the pandemic.

Victoria Moon, campaign manager, applauded the group for doing "a great job" at a time with a lot of barriers.

"Our program has been very successful in contacting voters," she said.

If elected, her plan is to meet with town governments, businesses and community members to come up with "creative economic solutions" before she's even sworn in. She looks at the local Southern Vermont Dance Festival, which she founded, as a potential model for figuring out ways to bring recovery after the pandemic.

Moon said the current crisis highlighted how quickly changes can be made when needed. Siegel plans to continue fighting for economic justice and against climate change.

While voting, she turned to her son Ajna Siegel, 18, and asked whether he was trying to decide who to pick for lieutenant governor. He helped with the campaign and took the voter's oath Tuesday.

"I feel like I'm walking into a world that's not perfect," he said.

While he didn't want his mom to rule his world, he said, he wanted a candidate who would make the world a better place and she was that person. He said she could start inspiring people.

"I know firsthand she can do that," he said.