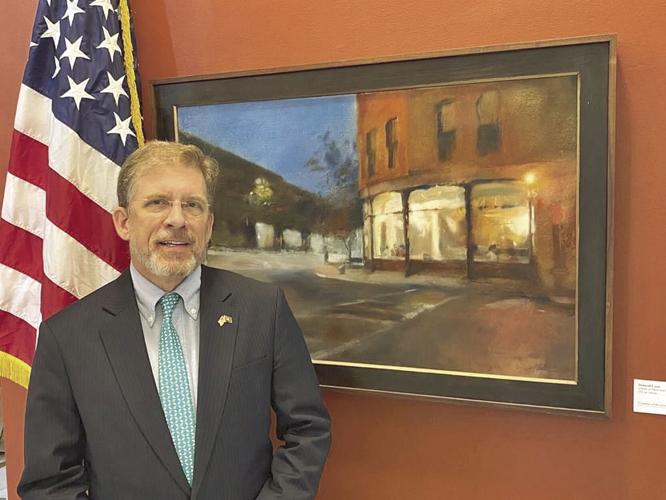 W. Patrick Murphy, the U.S. Ambassador to Cambodia, stands next to “Corner of High and Main Street” by Putney artist Deborah Lazar, which is one of 14 works of Vermont-connected art hanging in the Ambassador’s Residence in Phnom Penh. 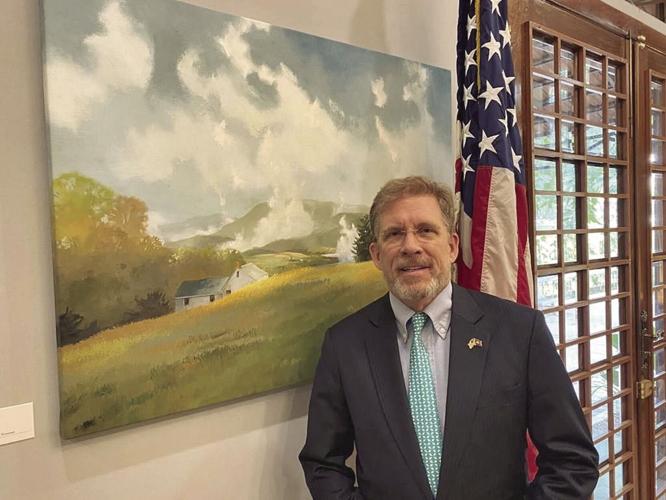 W. Patrick Murphy, the U.S. Ambassador to Cambodia, stands next to a painting by Vermont artist Paul Stone, which is one of 14 works of Vermont-connected art hanging in the Ambassador's Residence in Phnom Penh.

W. Patrick Murphy, the U.S. Ambassador to Cambodia, stands next to “Corner of High and Main Street” by Putney artist Deborah Lazar, which is one of 14 works of Vermont-connected art hanging in the Ambassador’s Residence in Phnom Penh.

W. Patrick Murphy, the U.S. Ambassador to Cambodia, stands next to a painting by Vermont artist Paul Stone, which is one of 14 works of Vermont-connected art hanging in the Ambassador's Residence in Phnom Penh.

PHNOM PENH — It’s been 40 years since W. Patrick Murphy graduated from Brattleboro Union High School and embarked upon his career in Foreign Service, but Brattleboro has never been far from his heart.

“I’ve spent half my life overseas, in a dozen or so countries, with time in Washington as well, and it all started with the BUHS Swiss Exchange started by French teacher Maggie Cassidy,” said Murphy, the U.S. Ambassador to Cambodia, during a Zoom interview with the Reformer.

Through the Swiss Exchange, many of Cassidy’s French students and their Swiss counterparts spent part of their school year in their host communities.

“Was it in my plan to go into the Foreign Service?” Murphy asked. “Not in 1981. But I had gotten the international bug through BUHS with many great teachers.”

Murphy is the first to admit he wasn’t Cassidy’s best student in the classroom, but when he got to Geneva, he realized he had a knack for learning a language by being immersed in it.

“For me, to get overseas and live with a Swiss family and then host my counterpart in Brattleboro, I really did pick up the language,” he said. “I loved the opportunity to cross cultures and bridge gaps.”

Murphy also spent his junior year at UVM in France in the Vermont Overseas Study Program.

Murphy, who was the first member of his family to obtain a passport, said his interest in becoming a diplomat blossomed at the University of Vermont and later, in graduate school at Johns Hopkins University.

Before joining the Foreign Service in 1992, Murphy was a resource economist for the World Wildlife Fund and a policy analyst for the Overseas Development Council. In addition to French, over his many years of assignments overseas, Murphy has learned Burmese, Cantonese, Spanish, and even some Thai and Khmer.

“I never had an incredibly great skill or aptitude for learning languages in a classroom, but being immersed in a language has been a source of strength for me,” he said.

Murphy said his desire for a career in public service and policymaking was also sparked by the late Tom O’Brien, a former chairman of BUHS’ social studies department who developed the schools “model” programs.

“His stewardship of the program created an opportunity for average students in a small town to learn about the world in the United Nations, our own Congress and citizen participation in the Vermont Legislature,” Murphy told Cassidy in a Reformer interview in 2009.

“He was a tremendous teacher, a mentor and a great inspiration,” said Murphy.

Murphy said until this last year, with travel restrictions in place due to the COVID-19 pandemic, he and his family regularly visited Vermont at least twice a year. Although he has not being able to get to New England, he and his wife, Kathleen Norman, originally from Connecticut, cured their homesickness by hosting an art exhibit in the official Ambassador’s Residence in Phnom Penh, Cambodia, where Murphy has served as U.S. Ambassador since 2019.

The exhibit, featuring 14 paintings, textiles and photographs that capture the Vermont landscape, was arranged by the U.S. Department of State’s Art in Embassies program, which showcases America’s art to audiences around the world, in embassies, consulates and official diplomatic residences.

When Murphy has a particular longing to visit his hometown, he pauses to reflect in front of Putney artist Deborah Lazar’s oil on canvas, “Corner of High and Main Street.”

“When I was growing up, we used to go to the Paramount Theatre and get a double bill for 75 cents,” said Murphy. That corner was also home to a Dunkin’ Donuts and the Hotel Pharmacy, now Duo Restaurant.

“After church we used to go and get a dozen doughnuts,” said Murphy. “The art exhibit is a daily reminder of home for me and my wife. To see the art of these Vermont artists is a tremendous way to start every morning.”

He decided to mount the picture in a prominent location in the residence because “It speaks to the iconic nature of a small-town American downtown. That particular intersection is truly iconic. I am delighted this painting is part of the collection.”

But Murphy said the art installation is not only about assuaging his homesick heart.

“We hope the exhibition speaks to the Cambodian people,” he said, “as the Kingdom’s agrarian traditions and emerald landscapes bear many resemblances to Vermont’s farming traditions and famous green mountains. The works at the residence remind us that art transcends geographical borders and connects us to our origins and roots.”

All of the artists in the exhibition have a strong connection to Vermont, and the majority — Kate Emlen, Elizabeth Fram, Julia Jensen, Lazar, Paul Stone, and Bhakti Ziek — currently work and live in the state. There is also a piece from the late German-American painter Wolf Kahn, who passed away in 2020 and had a farm in Brattleboro.

Also on display is a lithograph by celebrated American folk artist Grandma Moses. The largest public collection of her works is in the Bennington Museum, which Murphy visited on school trips as a boy.

“It’s an incredible honor to have my artwork hanging in the ambassador‘s residence in Cambodia,” said Lazar. “I am very pleased to find out that my painting is bringing the ambassador happy memories of Brattleboro.”

Lazar said the painting was inspired by Edward Hopper’s “The Night Hawks.”

“It is a privilege and an honor to have my work chosen to be part of our outreach program and share with the world our little unique corner of the world,” she said.

The ambassador’s residence hosts numerous events, receptions, dinners and concerts, welcoming in thousands of Cambodians and others visitors every year, said Murphy.

“All of our visitors now have a chance to see a piece of Vermont and consider the connections between the United States and Cambodia,” he said.

He also said he’s learned over the years that Vermont has a particular image in many people’s minds, informed by Vermont maple syrup and Ben and Jerry’s ice cream.

“Not only do we accept no substitutes, but we provide a gift of Vermont maple syrup to many guests at our home here in Cambodia,” said Murphy.

He also noted that political figures from Vermont — including the late Gov. George Aiken, who was born in Dummerston, as well as U.S. Senators Patrick Leahy and Bernie Sanders — are well known around the world.

“Cambodia is no exception,” he said.

Murphy has been a U.S. diplomat and public servant for over 30 years, but the assignment in Cambodia is his first as an official ambassador, appointed on Aug. 8, 2019. With Pres. Joe Biden being sworn in on Jan. 20, Murphy has now served under seven different presidents.

He has also completed diplomatic assignments in Burma (Myanmar), China, Iraq, Guinea, and Mali. His prior Washington service at the Department of State includes Special Representative for Burma (Acting), director and deputy director of the Office for Mainland Southeast Asia, political advisor for the Haiti Working Group, and desk officer for Burma and Laos.

Murphy was also in a unique position to observe the storming of the U.S. Capitol on Jan. 6 by right-wing extremists convinced by former Pres. Donald Trump and others that the 2020 presidential election was fraudulent.

“Like all Americans, we observed those developments with great concern,” said Murphy. “Some would argue what we were witnessing was an assault on our democracy. But what I said at the time holds true today — our republic is strong and our institutions are strong.”

Murphy said his belief was reaffirmed by several foreign diplomats he talked with who have seen such attacks elsewhere result in the overthrow of governments, but observe American democracy overcoming these challenges.

“Attacks on democracy are a constant,” he said. “It’s a reality, even though this attack was significant and almost unprecedented in our lifetimes. But what it revealed was the strength of our democracy, the rule of law, the role of elected officials, the media, and our civil society.”

Perhaps more resounding, he noted, is the fact that despite the siege of the Capitol Building, a peaceful transition was conducted on Jan. 20 when Biden was sworn in as the 46th president.

“Now we are moving forward with speed, governing and policy making,” said Murphy. “Some of the early moves by the administration really resonate strongly with populations in this region, especially during a global pandemic.”

Murphy said rejoining the World Health Organization and the Paris Climate Agreement reassured many people, who hope for American leadership on global issues, that the United States takes seriously the pandemic and the climate change.

“These early moves of re-engagement with the international community have been very well received,” he said

Murphy said he hopes one day to return to BUHS, but until then, he has some advice for graduates of his alma mater.

“If I could talk to my 1981 self, I would say be yourself, be who you are,” said Murphy. “Sometimes, at that age, it’s not easy. You want to fit in to the expectations of your community, peers, family and society and being yourself can put yourself in a place of vulnerability.”

Nonetheless, said Murphy, whatever you want to do in life, it should be driven by passion.

But, Murphy said, being kind is the most important thing you can do in life.

“It will pay you back,” he said. “You can sometimes be in very hostile environments as a diplomat, but a show of kindness will give you an ear to make your case. It’s the same at the community level. It’s important to be kind to your neighbors. In a country as polarized as the United States, acts of kindness can make a great difference.”

This is one of the things he treasures most about his home state.

“I am a proud American,” he said. “And I am equally as proud to be from Vermont and the values Vermont represents — independence, resilience, bipartisanship and kindness.”