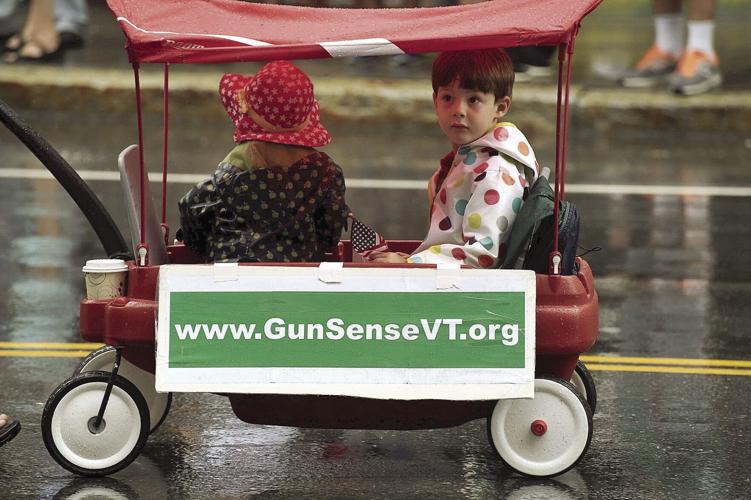 Alice and Ethan Braden ride in a wagon with the “Gun Sense Vermont” group in a Brattleboro Fourth of July parade. 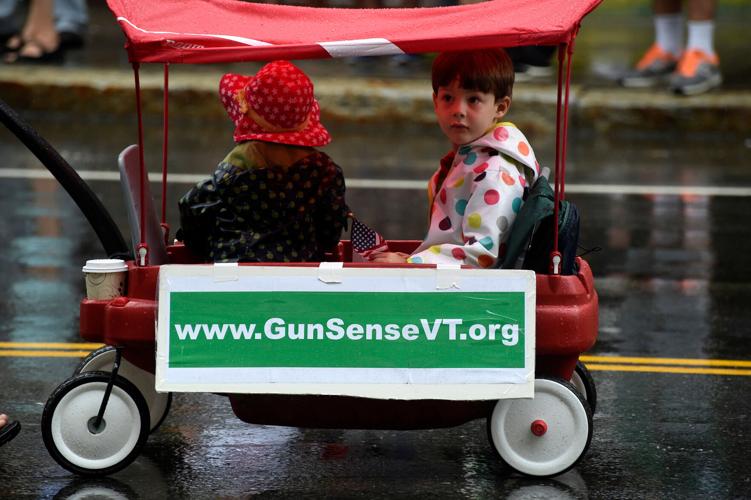 Alice and Ethan Braden ride in a wagon with the "Gun Sense Vermont" group in a Brattleboro Fourth of July parade.

Alice and Ethan Braden ride in a wagon with the “Gun Sense Vermont” group in a Brattleboro Fourth of July parade.

Alice and Ethan Braden ride in a wagon with the "Gun Sense Vermont" group in a Brattleboro Fourth of July parade.

Lily Charkey Buren and Padma Mendelsund, both juniors, spoke in favor of S. 30. Their contributions were just part of a full morning of testimony, in which supporters and opponents both spoke at length and were questioned by the committee.

Charkey Buren recounted two interactions with firearms in locations where the bill would ban them: At a hospital, where she and her late mother had been half an hour before an armed man gained entry, and at the Statehouse, where she was a page at the time Gov. Phil Scott signed a package of gun safety bills into law, including a ban on high-capacity magazines.

“As a page, I shared the legislature’s anxiety” over those bills, she said, and over the hundreds of people wearing orange shirts and hats who were filling the halls of the Statehouse daily in opposition to those bills.

“I know I would have felt safer going to work every day” if the changes proposed in S.30 were in place, Charkey Buren said. “An eighth-grader should not feel they’re going to be shot because they’re in the wrong place at the wrong time.”

Mendulsund, who plans to become a pediatrician, said medical professionals should be able to focus on providing care, and not worrying that distraught individuals experiencing the emotions that come with a loved one being treated at a hospital might have access to firearms.

“I strenuously believe the protection of employees and patents should be a No. 1 priority,” Mendulsund said. “I understand that Vermont has a strong hunting culture and many own guns for protection, but there are environments where guns can only do harm.”

Testifying at length in opposition to the bill was Eric Davis, the president of Gun Owners of Vermont. He offered a comment from a child care worker who offered their testimony anonymously, out of “fear of political retribution.”

According to Davis, the worker said school shootings are “random and unpredictable” and could only be prevented by having armed police or guards everywhere.

“Those tasked with teaching our children should have the option to provide effective and efficient protection for the lives of the children they look after,” the child care worker said, according to Davis. “I feel if we are serious about protecting our children, we should have all options on the table, including providers directly intercepting and ending a threat.”

Davis also focused at length on the feelings of gun owners and Second Amendment advocates that they have been singled out by lawmakers.

“The absolute proof of this can be observed simply by looking at the number of antigun bills proposed over the last 10 years versus legislation that protects the right to keep and bear arms. We then feel insulted as gun control lobbyists and legislators alike pontificate that these restrictions are for our own safety, as if we are too stupid to know what is good for us,” Davis said.

“I take that to be an indication that anytime what we call responsible regulation is proposed, you in your group communicate to members they’re being attacked,” Baruth said.

Both Davis and Chris Bradley, president of the Vermont Federation of Sportsmen’s Clubs, both said that gun-free zones invite more trouble because they’re the one place where people with bad intentions know there will be no one with guns to stop them. Representatives of the National Rifle Association and Will Moore of the Vermont Traditions Coalition also testified in opposition.

Many repeated a theme: that the bill was “a solution in search of a problem” that is already addressed by existing law against trespassing.

Bradley also said the bill was “not based on any demonstrated need, but instead based only on conjecture,” despite Vermont’s relative safety from violent crime.

The committee, including chairperson Sen. Dick Sears, D-Bennington, and Sen Jeanette White, D-Windham, started work on S. 30 last month. But the committee took a break from the bill and returned to it this week as the original draft of the bill had not gained traction among committee members beyond Baruth.

Baruth brought the bill forward following the armed assault on the U.S. Capitol on January 6.

High school students from Essex High School and members of gun safety reform organizations including Moms Demand Action and Gun Sense Vermont also testified in favor of the bill, as did Montpelier Mayor Anne Watson and Rebecca Bell of the Academy of Pediatrics Vermont Chapter.

Aside from safety concerns, proponents said the presence of guns and military tactical gear in and at civic buildings is a bullying and intimidation tactic that needs to stop.

Iris Hsiang, a junior at Essex High School, said in 2018, she was confronted verbally by opponents of gun legislation and followed as she left the capitol complex in Montpelier. “These incidents terrified me.” she said.

Hsiang also recounted seeing a man at a protest she attended this summer with a semiautomatic gun, a bulletproof vest and extra magazines. “To me, this signaled he had come to kill,” she said.