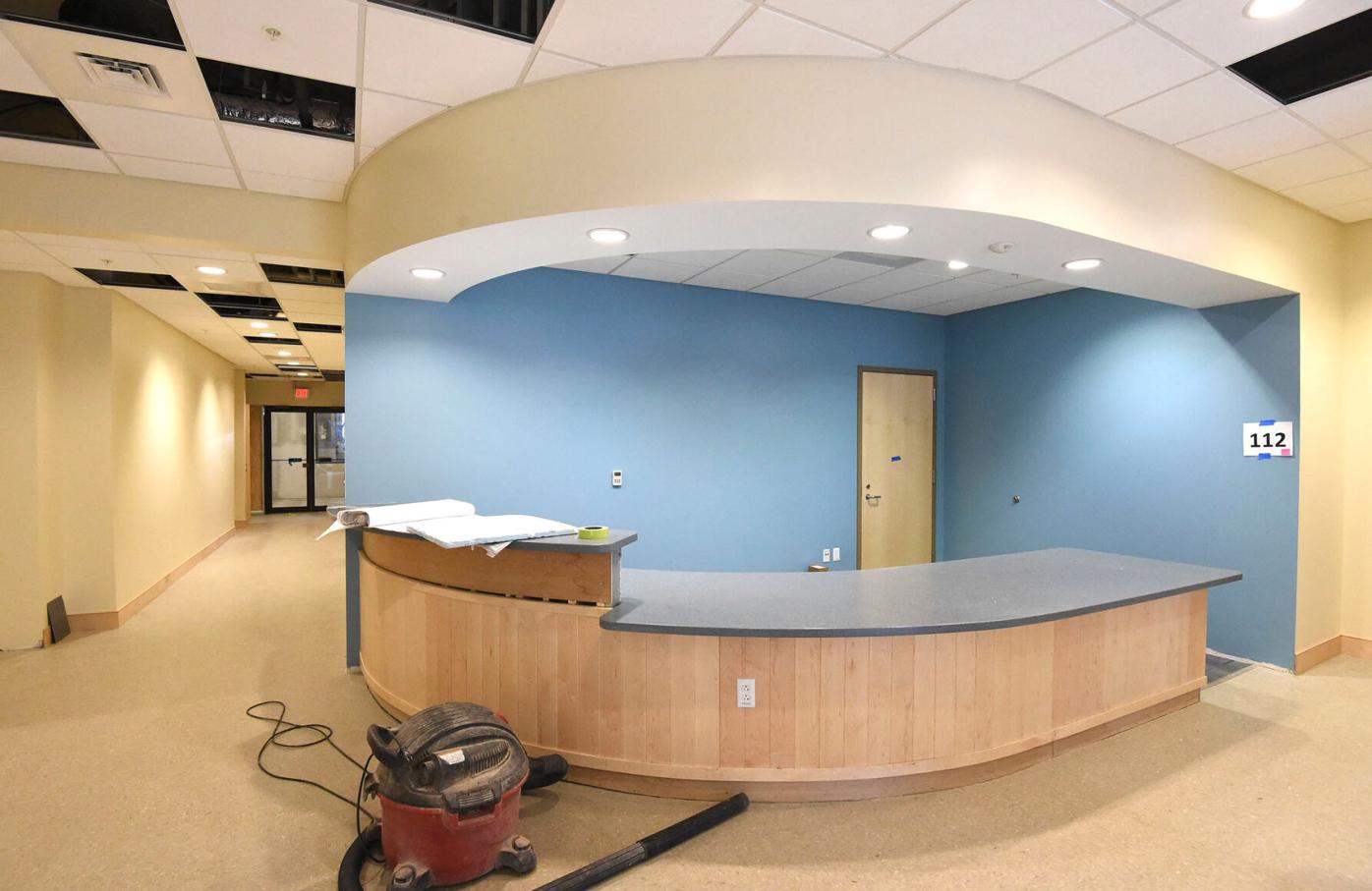 The front desk in the Vermont Technical College and Community College of Vermont section of the newly renovated Brooks House on July 31. (Kayla Rice/Reformer) 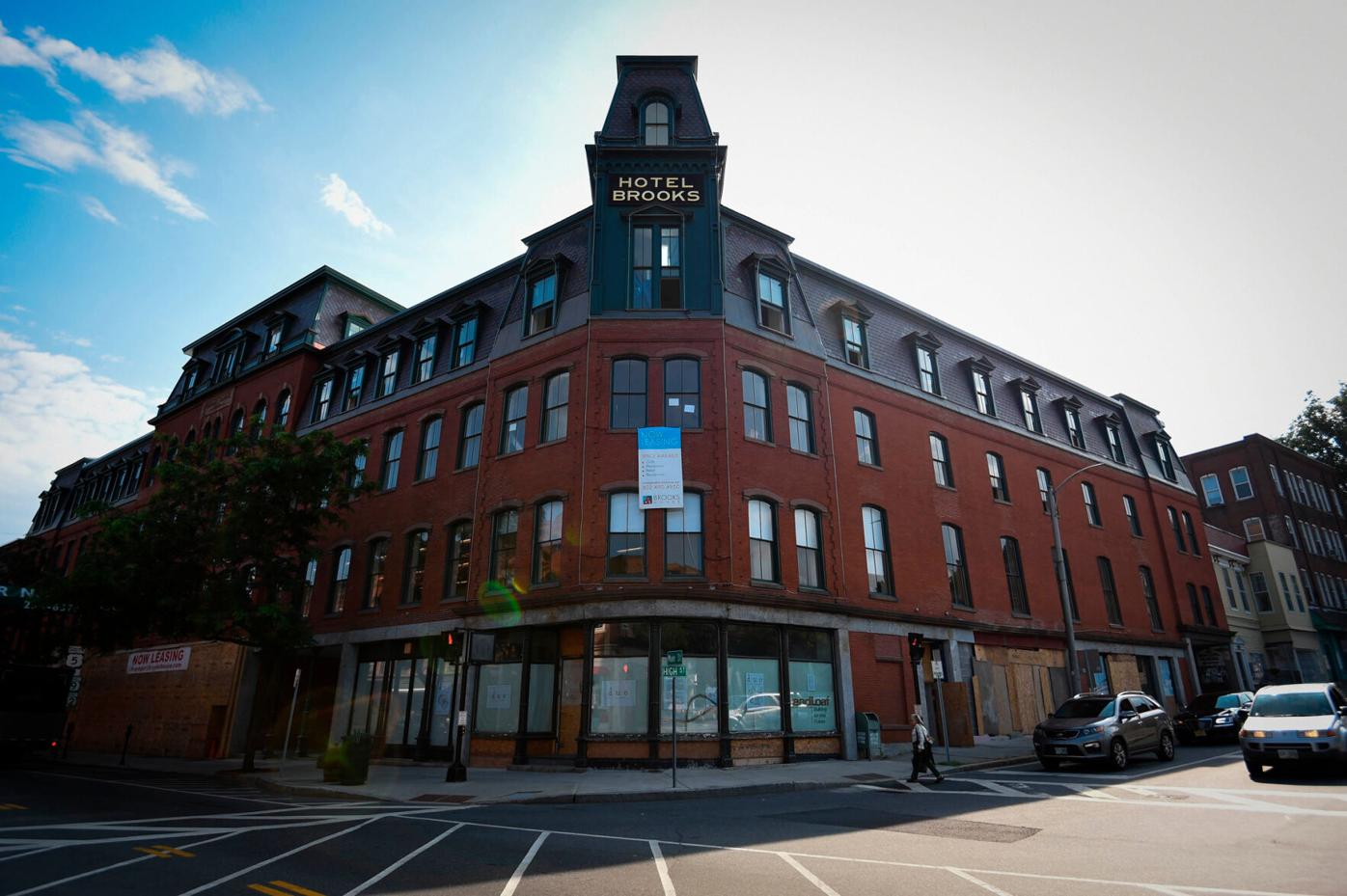 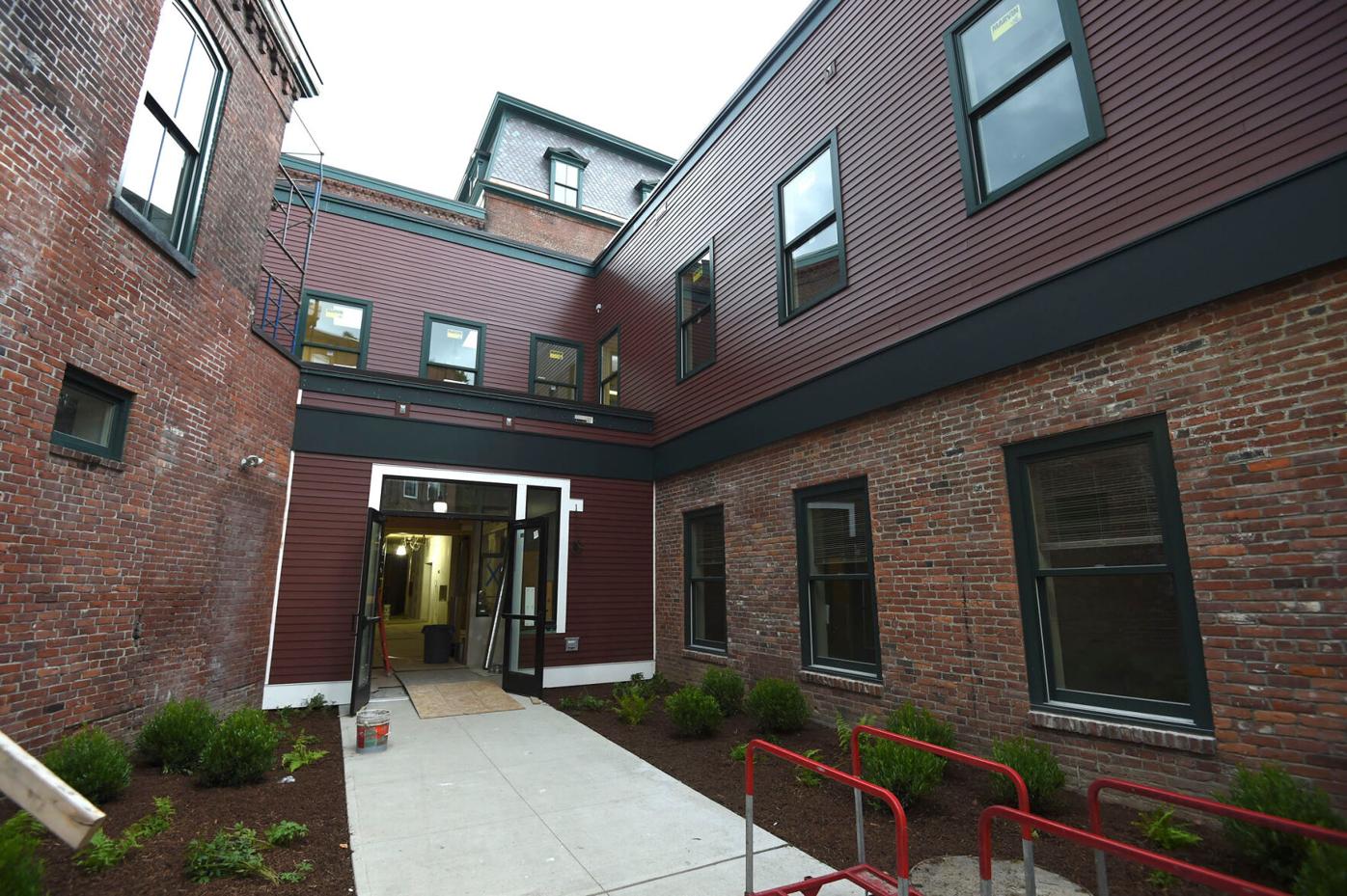 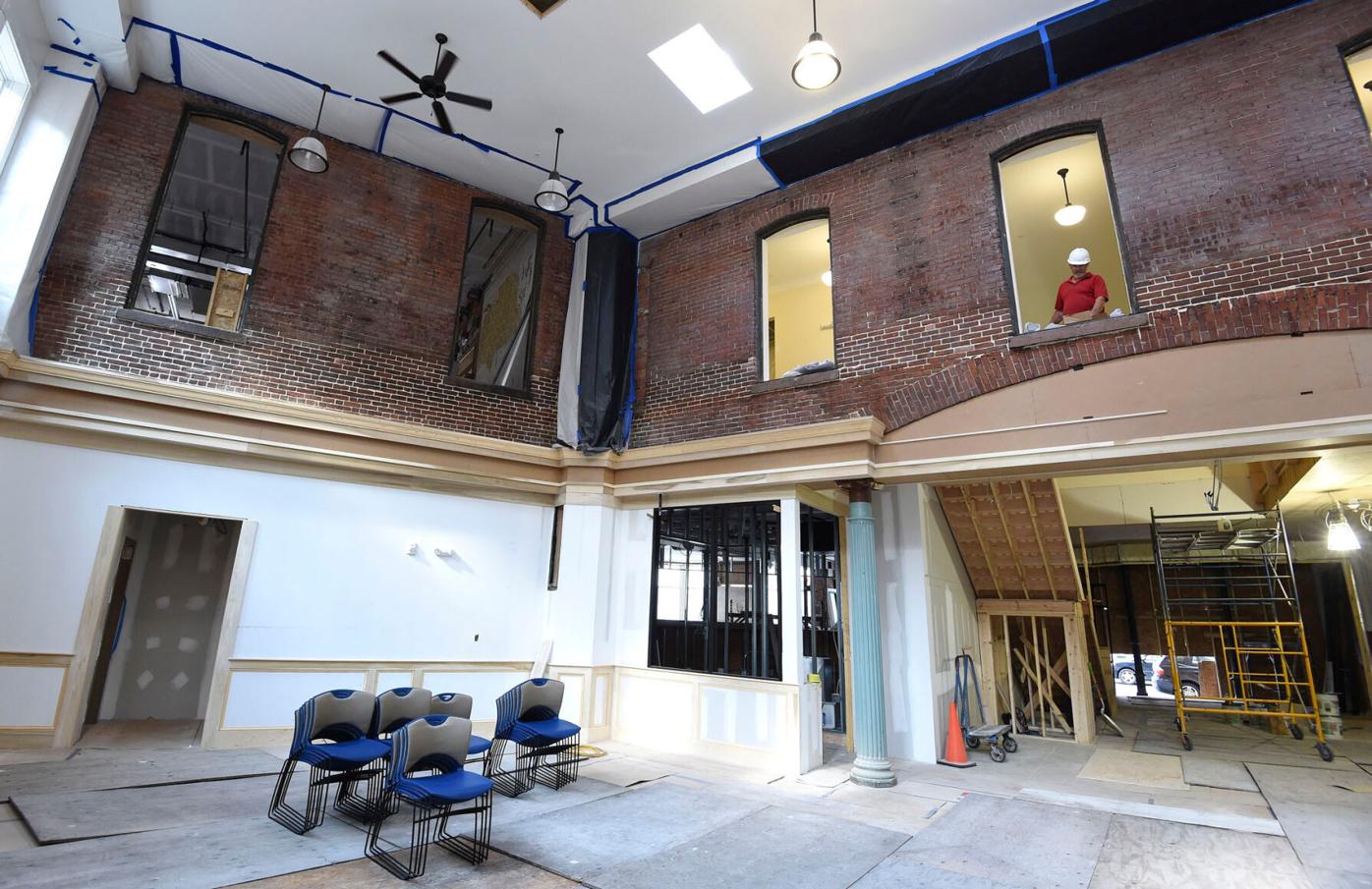 Inside the atrium area of the newly renovated Brooks House on July 31. (Kayla Rice/Reformer)

The front desk in the Vermont Technical College and Community College of Vermont section of the newly renovated Brooks House on July 31. (Kayla Rice/Reformer)

Inside the atrium area of the newly renovated Brooks House on July 31. (Kayla Rice/Reformer)

Editor's note: This is the first of a two-part feature.

BRATTLEBORO -- There are a million reasons why the Brooks House project should not have gotten off the ground.

Actually there are about 14 million reasons, which is about the number of dollars invested in the project which will exceed the final value of the rehabilitated real estate. When the project is complete developers will have invested about $23 million into a building which will be worth about $8.5 million. Along with the risky investment there have been months of delays brought on by 150 years of shoddy renovations and additions to the historic Main Street property.

There was an 11th hour decision by the former lead bank to pull out of the pending deal due to the complexity of the financing and then very high bars established by the new bank before it would hand over the cash. And once the work started contractors found rotted wood and mold which added costs and delay to the project.

Still, just last week, the Community College of Vermont and Vermont Technical College moved their furniture in to the Brooks House and students are expected to begin walking the halls and registering for classes next week.

The first residential tenants will move in next month.

It's been more than three years since a five-alarm fire ripped through the upper floors of the Brooks House, on the corner of Main and High streets in downtown Brattleboro.

Bob Stevens, a civil and structural engineer at Stevens & Associates and one of the new owners of the building, was inside the morning after the fire assessing the structural integrity of the damaged building.

Stevens has been intimately involved with every aspect of the financing, rentals, design and construction of the historic downtown property over the past three-and-a-half years. He said that while the project has required sweat equity, creative financing, deep-pocketed angel loans, and on-site crews pulling double shifts, it was ultimately the boundless support of the Brattleboro community that brought the Brooks House back to life.

"It's hard to remember all of the people it has taken to get us this far," Stevens said. "Every time we went back to the community someone stepped up to help. In the end this project just had to happen."

When Stevens walked in to the Brooks House on the morning of April 18, 2011, the day after the fire, he was working for the former owner, Jonathan Chase.

Once Stevens and his crew established that the building was sound, but damaged, they began to plan for the stabilization and protection of the roof and upper floors. For the next four months Chase spent about $1.5 million stabilizing the structure, installing a new roof, removing the debris and getting the building ready for the winter. During this time, and extending into 2012, Stevens and his staff worked on plans for the rehabilitation of the Brooks House. All of this time he was working closely with Chase, imagining the future of important Main Street property and keeping him informed of the financial implications of the eventual work.

As the cost estimates began to slowly rise Chase began to doubt his ability to come up with the money to pull off the massive project.

"It is not uncommon for this to happen with old buildings downtown, and it became pretty clear that the cost to rebuild was going to greatly exceed the value of the building at completion," Stevens said. "And even though we had subsidies that we could bring to bear, it meant that Jonathan was going to have to go deeply into debt to be able to put that building back on line."

Craig Miskovich, an attorney at Downs Rachlin Martin who specializes in tax credit financing was also working closely with Chase. Chase confided with Stevens and Miskovich that he was not going to be able to commit to the project, and in April 2012 the two men announced that they would be seeking other investors to purchase the Brooks House from Chase.

Stevens had worked on dozens of projects but he had never become an investor in such a large property. As he and Miskovich discussed their options he said they agreed to move ahead with the understanding that it was going to require patience and a lot of community support.

"Craig and I became concerned that if Jonathan couldn't do it with the backing of the insurance he had, what were the prospects for another developer to come to town and take on a project of this magnitude and what would we as a community end up with?" Stevens said. "Typically developers want to get paid for their investment, their time, and their return on investment for the risk and the money they put in and this project does not have the ability to pay for any of those things. To pull this off you have to be a community-minded developer who is doing this because you feel strongly that it's the right thing for the community."

The initial estimate to renovate the Brooks House was pegged at $14 million and Stevens said he expected to begin construction within six months after finding additional investors.

A few months later Stevens and Miskovich announced that Pete Richards, Drew Richards and Ben Taggard would join the investment team and the five would work together to try to come up with the money to purchase the building from Chase and redevelop it.

At about the same time, Gov. Peter Shumlin was making a push to bring Community College of Vermont and Vermont Technical College to downtown Brattleboro. The colleges needed a downtown location and the Brooks House investors made it clear that their building would be the perfect site. The investors pulled together an advisory team made of town officials, business leaders and banking and financial experts.

"This project has had tremendous community support the whole way," Stevens said. "We needed the help. We brought this team together to help us figure out how we were going to do this."

One of the initial hurdles was coming up with the money to get the project off the ground. The group thought they needed about $750,000 to continue design work and complete the real estate deal. That estimate ballooned to $1.25 million before the deal was done, and if for some reason the purchase fell through the investors would have lost all of that money.

"We had a feeling that this needed to get done, and we wanted to do it in a way that benefited the town in the greatest extent possible," Stevens said. "We're not sure that would have happened if we didn't step in."

Meanwhile the estimate had grown to about $18 million, though Stevens still expected to start construction in the fall of 2012 with the first tenants slated to move in during January 2014.

The project received a huge shot in the arm in October when the Vermont State College Board approved the move into the Brooks House. The 20-year lease agreement came with about $2 million in state development funding for the colleges, as well as $250,000 in annual rent for about 18,000 square feet of Brooks House space.

"This project would not have happened without the colleges," Stevens said.

Gov. Shumlin announced in November that the project was going to receive a $750,000 HUD slum and blight grant.

Everything seemed to be going their way through the fall of 2012 and Stevens announced in November that a deal with Chase was imminent. The project cost estimate had now exceeded $20 million.

While the project had already required a mix of hard work and luck just to complete the real estate deal, financing the renovation proved even more challenging. The investors needed a complex combination of town and state grants, private investment and state and federal tax credits. Typically federal tax credits are awarded to large corporations that can put a factory in Ohio up for collateral while developing a new facility in Vermont. The Brooks House developers, who absolutely needed those federal tax credits, had no such luxury.

The project received its biggest setback to date when Eastern Bank of Boston pulled out, saying that the complex federal and state tax credits created too much risk for the bank. Under terms of the federal tax credit program the collateral put up by the investors is placed in front of the banks, and with millions of dollars on the line the banks were not too excited to get involved.

"We were asking for $5 million for an empty building that we did not yet own. Their decision was understandable," Stevens said. "But this was a total surprise. It was shocking. We thought the banks would lend us this money. The building's been rented for 150 years, why would it not be rented afterwards?"

During this time the group was burning up about $30,000 to $40,000 per month on design costs, maintenance and deferred rental payments.

Tomorrow: A community steps up; then, the work begins.