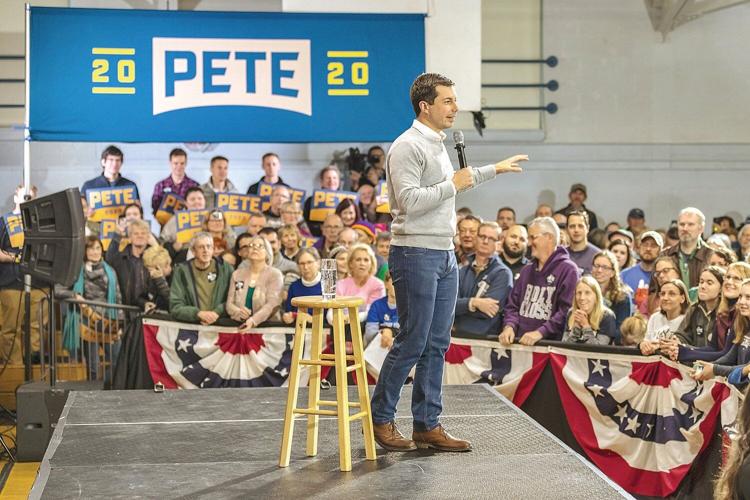 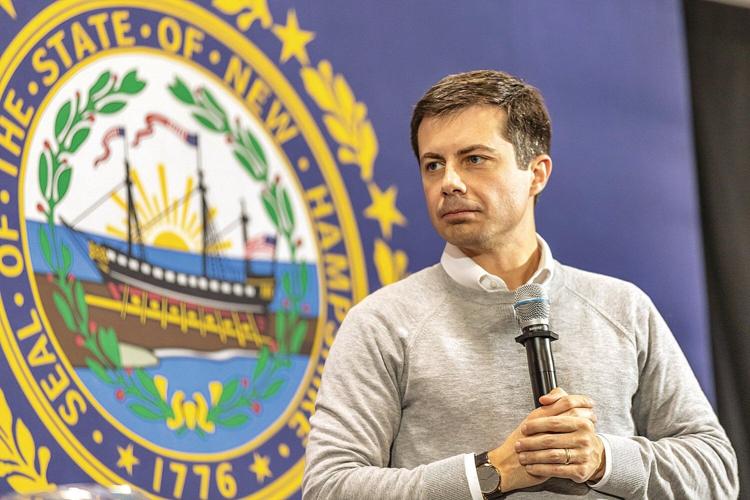 Democratic presidential candidate Pete Buttigieg listens to a question from the audience at a campaign event in Walpole, N.H. Sunday.

Democratic presidential candidate Pete Buttigieg listens to a question from the audience at a campaign event in Walpole, N.H. Sunday.

WALPOLE, N.H. — Democratic presidential hopeful Pete Buttigieg took his campaign to Walpole Sunday afternoon, where he was greeted with a gymnasium filled with both enthusiastic supporters and the politically curious.

Buttigieg, who is rising in the polls in first-in-the-nation voting states Iowa and New Hampshire, got his loudest and most sustained applause when he talked about "the first day when the sun comes up and Donald Trump is no longer president."

Buttigieg, the mayor of South Bend, Ind., drew more than 700 people to the Hubbard Gym on a chilly late fall afternoon, and there were plenty of out-of-state license plates in the parking lot besides New Hampshire. People from Vermont, Massachusetts and New York also came to the event, curious to see if the rising candidate should earn their vote.

Buttigieg said it is time to end the "chaos" of the Trump presidency and "put the Tweets in the rear view mirror."

He said the country is more divided now than it ever has been, and that the next president has to make healing the divisions a priority.

He listed climate change and "Medicare for All Who Want It" as priorities for his administration, and an education secretary "who believes in education."

He said rescinding many of Trump's executive decisions on the environment is also a top priority, as well as supporting a more civilized and unifying approach to government.

How can you govern a country, he asked, "If you hate half the people in it."

The line to get in to hear him and learn whether he is the right one to oust Trump snaked around the building. Buttigieg staffers descended on the people, asking if they were Walpole residents (not many were) or whether they were from New Hampshire (a stronger showing).

Buttigieg had drawn about 1,300 people to an event in Lebanon, N.H. , on Saturday, the largest gathering he has drawn so far in New Hampshire, a Buttigieg staffer said.

Beth Cote of Nashua, N.H., said she gave up her job in the non-profit health care field in Philadelphia to return to her home state to work for Buttigieg.

Cote said the issue of health care is the "litmus test" that drew her to Buttigieg's campaign, saying people who already have good health insurance shouldn't have to give it up. "People should have a choice," she said.

She gave up her health insurance when she quit her job to work for the Indiana mayor. "I love everything he stands for. It's better policy to give people a choice," said Cote.

Sarah Weck of West Chesterfield, N.H., was there as a volunteer as well.

Weck, whose family owns Hidden Springs Maple in Putney, Vt., said the first time she heard Buttigieg speak, she was convinced he was the candidate for her in 2020.

A former supporter of Vermont Sen. Bernie Sanders, Weck said it is time for someone younger with younger ideas. Buttigieg, 37, fits that bill, she said.

"The first time I heard him speak, I was impressed with his intelligence and logic. He cares a lot about people," said Weck, noting she even brought her two children, 10 and 15, to meet him. Weck said she has been volunteering for his campaign for the past three months.

Climate change, she said, is the most important issue to her.

Buttigieg was introduced by a strong supporter and one with lots of New Hampshire connections — House Rep. Lucy McVitty Weber, D-Walpole — who said she has been impressed with Buttigieg since meeting him earlier in the year — and had a hard time getting into that house party in Alstead, N.H. because of the turnout. She said she had been initially skeptical because South Bend is the same size as Manchester, N.H.

But, despite that initial skepticism that he had the experience to run for president, she became a supporter.

One familiar face in the crowd was former Vermont lieutenant governor Doug Racine, who said he came to Walpole to hear Buttigieg out of curiosity. Until now, he said, he has been leaning toward supporting former Vice President Joe Biden.

"I'm interested in hearing what he has to say," said Racine.

Westminster, Vt., retired judge Patricia Whalen also said she came to the Walpole school out of political curiosity. "I like him a lot, but I'm not decided," she said.