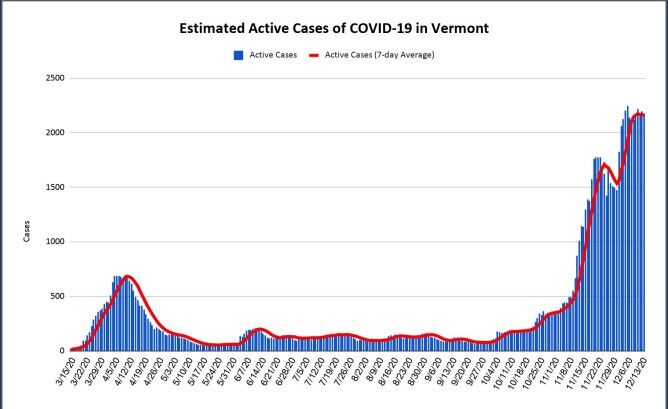 This chart shows the number of active COVID-19 cases in Vermont and how they have grown during the current surge. 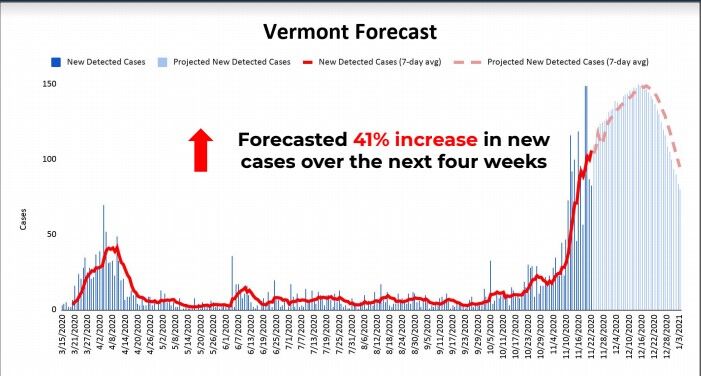 The state’s data modeling is showing the potential for a continued spike in COVID-19 cases over the Christmas holiday season. 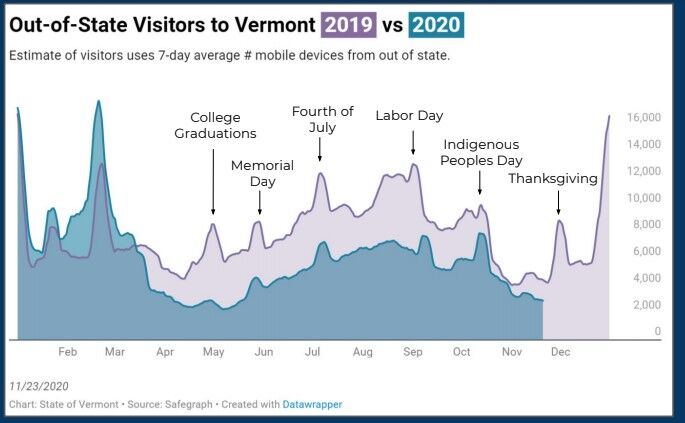 Mobility data comparing 2019 to 2020 shows that Vermont residents took the state’s guidance on avoiding travel during the Thanksgiving holiday seriously.

This chart shows the number of active COVID-19 cases in Vermont and how they have grown during the current surge.

The state’s data modeling is showing the potential for a continued spike in COVID-19 cases over the Christmas holiday season.

Mobility data comparing 2019 to 2020 shows that Vermont residents took the state’s guidance on avoiding travel during the Thanksgiving holiday seriously.

MONTPELIER — Vermont Gov. Phil Scott and state Health Commissioner Dr. Mark Levine hailed the arrival of COVID-19 vaccine doses in the state on Tuesday, but reminded residents to remain vigilant as cases continued to rise and the state finally reached the 100-death plateau.

Scott and Levine announced Tuesday, during the twice-weekly COVID-19 briefing, that the first 1,950 doses of the Pfizer vaccine had arrived in the state on Monday, with half going to the University of Vermont Medical Center and half to the state vaccine depot. Another 1,950 doses arrived late Tuesday morning, Levine said. A third shipment of 1,950 doses will be sent directly to pharmacies under contract with the federal government to deliver doses at long-term care facilities, starting Dec. 21.

The U.S. Food and Drug Administration approved the Pfizer-BioNTech vaccine for emergency use late Friday.

Following CDC and state guidelines, the vaccine will first go to emergency health care workers in long-term care, emergency departments, intensive care units and other positions with direct patient contact, as well as to residents of long-term care facilities.

Levine said the state has also pre-ordered a total of 16,400 doses from Moderna, whose vaccine, developed with the help of $1 million in research grant funding from country music icon Dolly Parton, is expected to be considered for emergency approval as early as this week. That order, if distributed in full, would bring Vermont to a total of nearly 34,000 doses, Levine said.

But Scott and Levine reminded listeners that both vaccines require two doses, both from the same manufacturer.

“This is a truly pivotal moment in the pandemic, one that should give us hope for the future,” Levine said of the vaccine arrival and the likely approval of the Moderna vaccine for emergency use. “At the same time, we all need to remember this is just the start of a long process.”

“This is obviously very welcome news as it marks the of our transition back to normalcy,” Scott said. But he warned that Vermont still has “months of hard work ahead,” and announced that his emergency order on the pandemic had been extended again, to Jan. 15.

“This marks the beginning of the end, but not the end,” Scott said. “That’s why we’ve got to stay focused.”

Scott said the state’s 100th coronavirus death was a “grim milestone” and a reminder that the battle against the virus isn’t over. He said the situation requires the sort of perseverance Vermonters show at the end of every winter and mud season, knowing that spring and summer are just around the corner.

“I know I’ve asked a lot of you the last nine months,” he said. “I’m asking you for a little more ... the fact is I need you, each and every one of you, to make sure we get through the last of this on solid footing, with as little loss of life as possible.”

But Scott said he is confident. “Time and time again Vermonters reward my faith in them,” he said.

Asked if he would impose the same travel guidance for Christmas as he did for Thanksgiving, Scott said he needs to see more data to make that decision. But he broadly hinted that the potential cost of not imposing such restrictions might guide his thinking.

“I’ll have to see the next two to three days, then we’ll look at the data and see what’s acceptable. But it won’t be back to normal, I can guarantee that,” Scott said. “I don’t want to pay the price all of January and February if we take the wrong steps now.”

Scott said he would do all he can to convince skeptics to trust the vaccine, but will not cut in line to take one of the shots himself. Those vaccine doses should go to people who qualify to go first, he said.

The state saw a reduction in new cases on Tuesday with 66, according to the Department of Health COVID-19 dashboard, with 20 hospitalized, including four in intensive care. In Southern Vermont, case growth remains high the past two weeks, with Bennington County reporting 97 new cases and Windham County seeing 88 new cases in the past 14 days.

In his weekly data report, Commissioner of Financial Regulation Michael Pieciak said while cases appear to be on the decline, the state has seen 771 cases this past week, the largest single-week figure reported since the pandemic began.

“The risk is greater than at any point in the pandemic, which is all the more reason for following the health guidance,” Pieciak said.

Scott said he did not have an update on when youth recreational and high school sports might resume. He said he needed to review more data and would report back Friday.

The governor, asked about the continuing negotiations in Congress on a second pandemic aid package, said his priority remains the restoration of unemployment benefits. The state was informed it would lose one extended unemployment benefit program on Friday, and two more pandemic relief pandemic programs are due to expire Dec. 26. As many as 20,000 unemployed Vermonters could be affected unless Congress acts.

Scott said it’s important that the unemployment issue be addressed before Congress leaves for the winter holiday. “You can always do a second [aid] package to accommodate all the things we need,” he said.