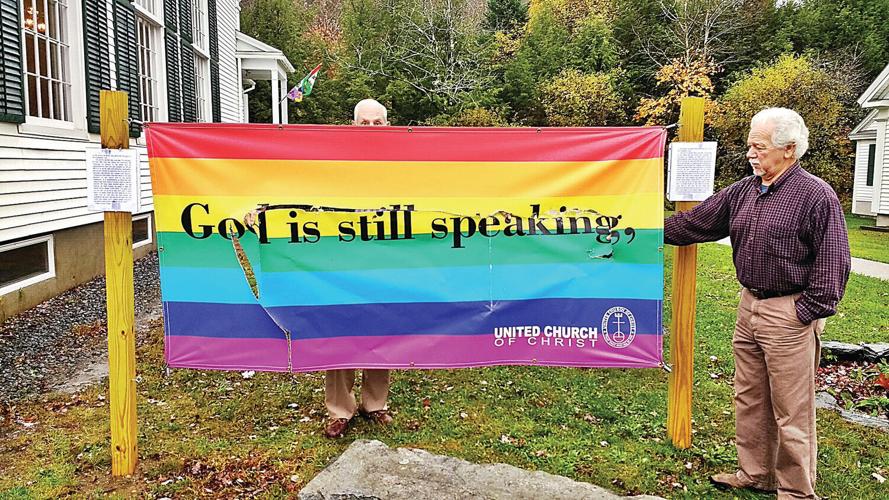 Richard Severance and Dario Lussardi, members of the church, hold up the damaged sign. 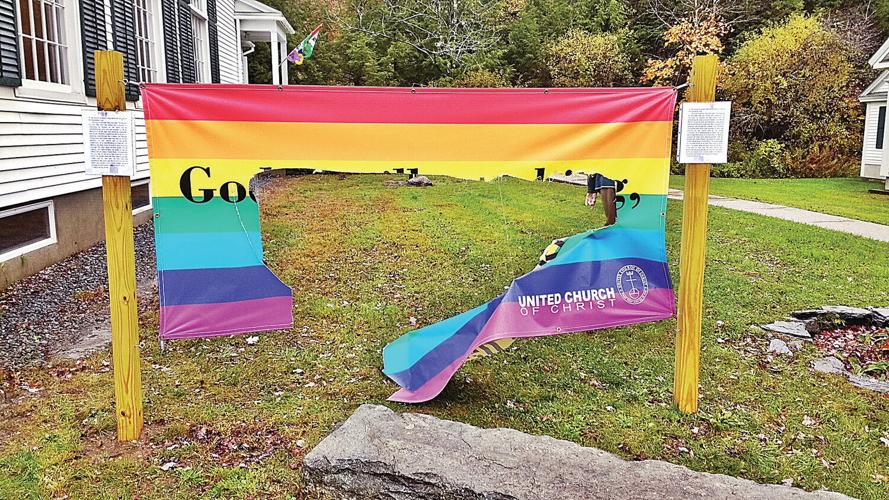 A diversity flag at the West Dover Congregational Church United Church of Christ was defaced.

Richard Severance and Dario Lussardi, members of the church, hold up the damaged sign.

A diversity flag at the West Dover Congregational Church United Church of Christ was defaced.

WEST DOVER — A diversity flag on the lawn of a church on Route 100 was cut up late Saturday night or early Sunday morning.

Jeremy Kirk, pastor at the West Dover Congregational Church United Church of Christ, said a meeting was held at the church until about 8:30 p.m. Saturday. He saw the damage when he arrived at the church at 7 a.m. on Sunday.

"You can see where someone put a knife through it," he said, noting that incidents like this have become more prevalent in the United States since the presidential election. "We'll replace it. And we'll replace it as many times as it takes until that expense isn't viable anymore."

Kirk said congregants had a range of different responses to the vandalism, including tears and anger.

"And it led to conversation about the presence of hate in our area, which is often overlooked," he said. "It emboldens our work."

The multicolored, UCC-produced flag reads, "God is still speaking." It had only been up for a couple months.

The flag serves as a symbol of an "open and affirming" church, Kirk said. The church went through a process a few years ago to make its mission include the promotion of acceptance of everyone, especially minorities and members of the lesbian, bisexual, gay, transgender, queer/question or LBGTQ community.

The intention of the vandalism, Kirk said, "is obviously to intimidate minorities, including ethnic and racial minorities and LBGTQ folks within the church community and the area community."

"That's what the sign represents," he said. "Our love is greater than any sign of hate and we have the backs of racial minorities, ethnic minorities and LBGTQ folks in our valley."

In a statement to the perpetrator/s, Kirk invited them to check out the church.

"It is heartbreaking to think that your identity and false sense of security relies on shutting yourself off from these beloved people," Kirk wrote. "You are missing out. Each Sunday, we gather to share the Gospel which means 'Good News.' It is good news for you and for all of us that God's love is given freely, no matter what we have done or not done. Come join us. See why we love church and experience the joy of a love that even death (and certainly ripped vinyl) cannot contain. You are in our prayers."

In a statement to anyone feeling threatened by the incident, Kirk wrote, "We, the community of West Dover Congregational Church, UCC have your back. We are blessed to call you neighbors and members of our community. Whoever you are and wherever you are on life's journey, you are welcome in our church."