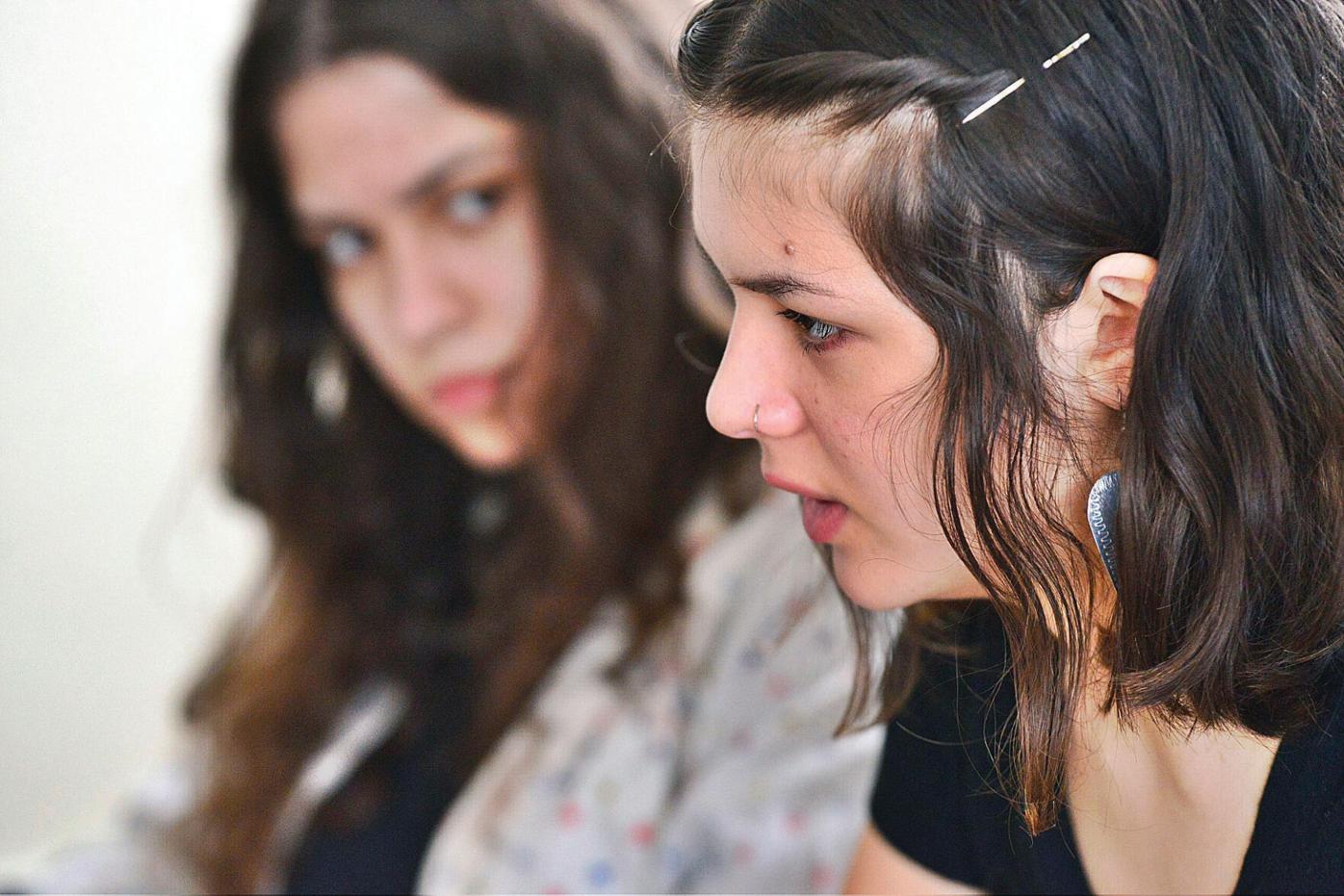 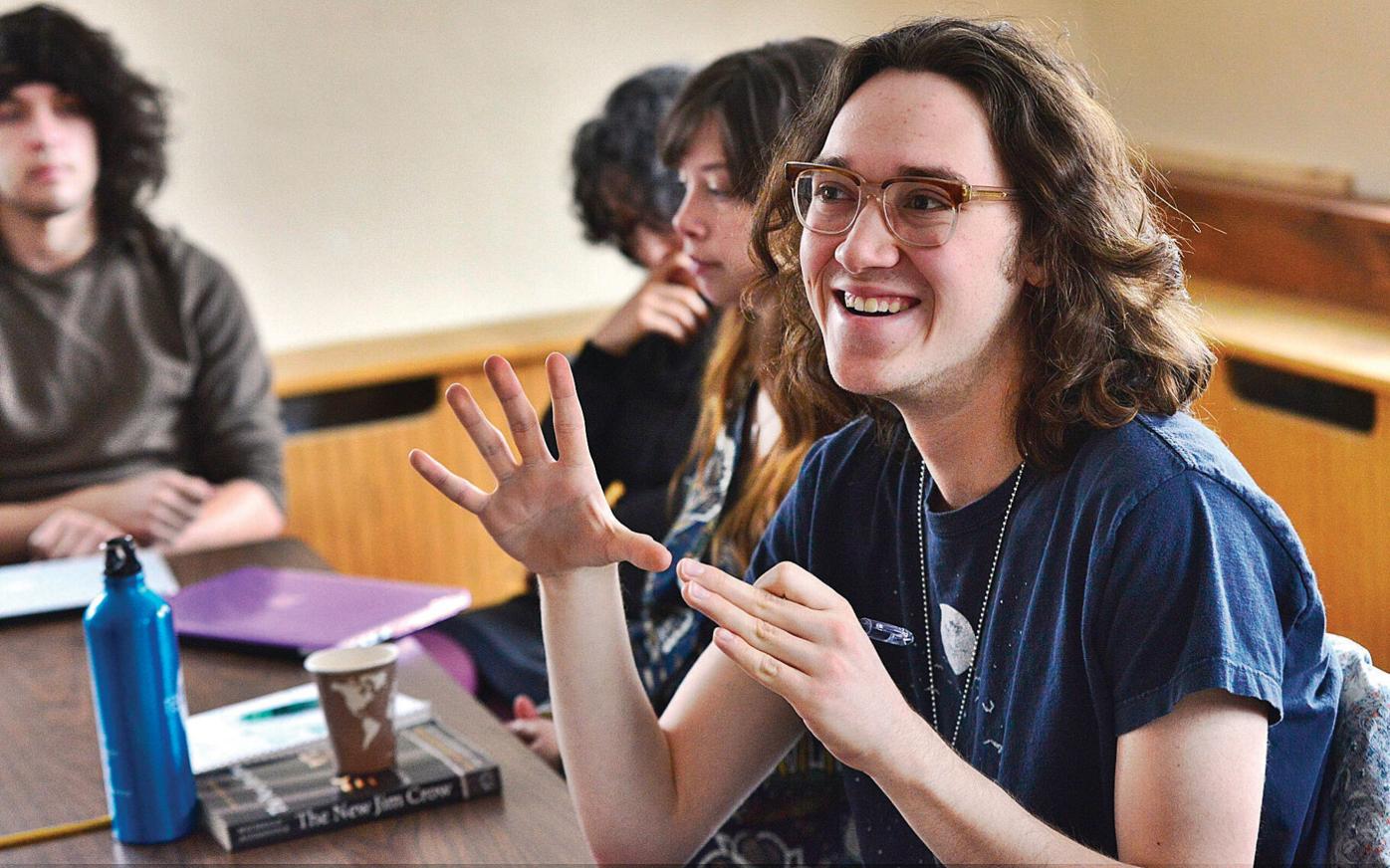 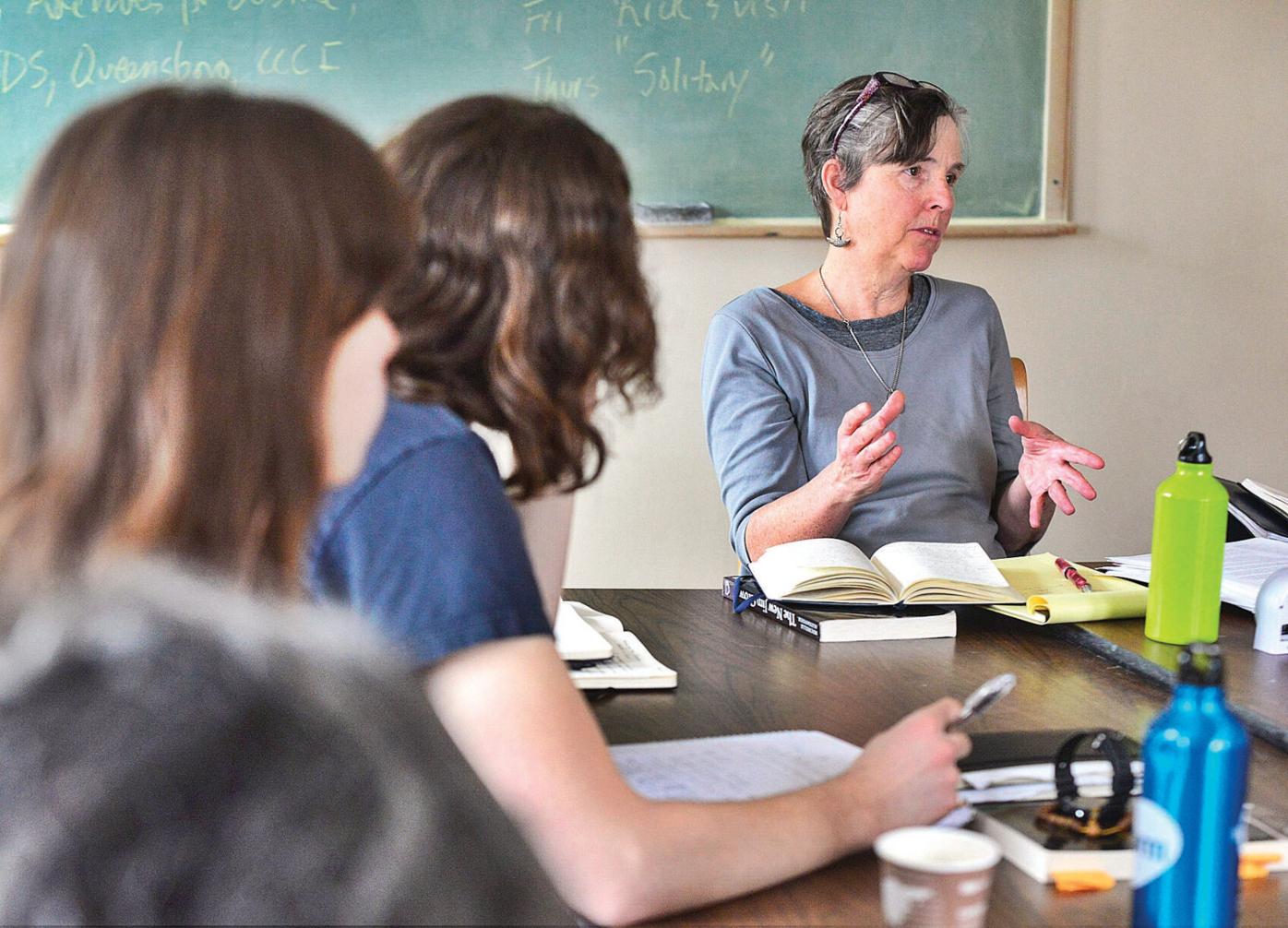 Meg Mott, a professor at Marlboro College, leads the class in a conversation about prison reform. 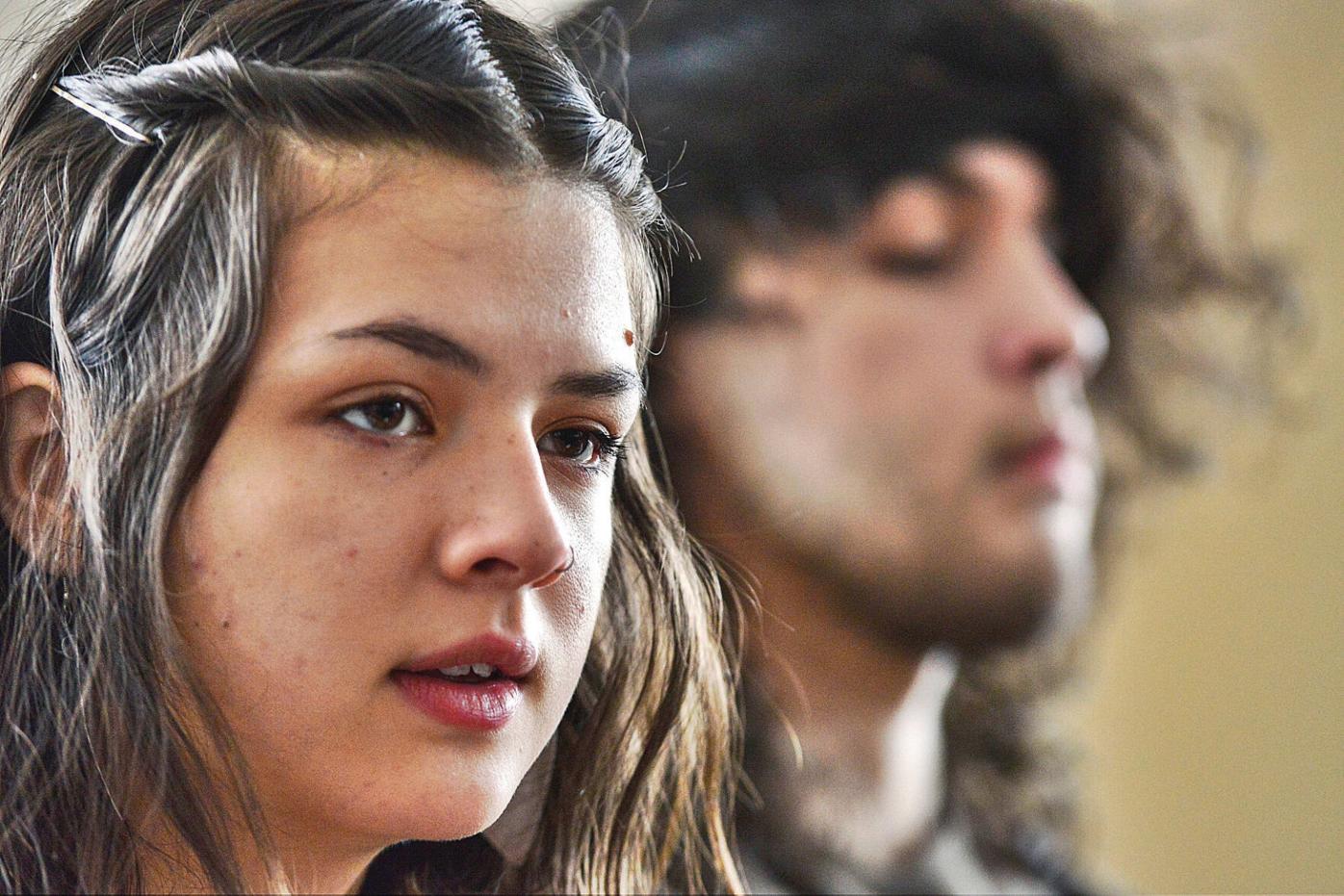 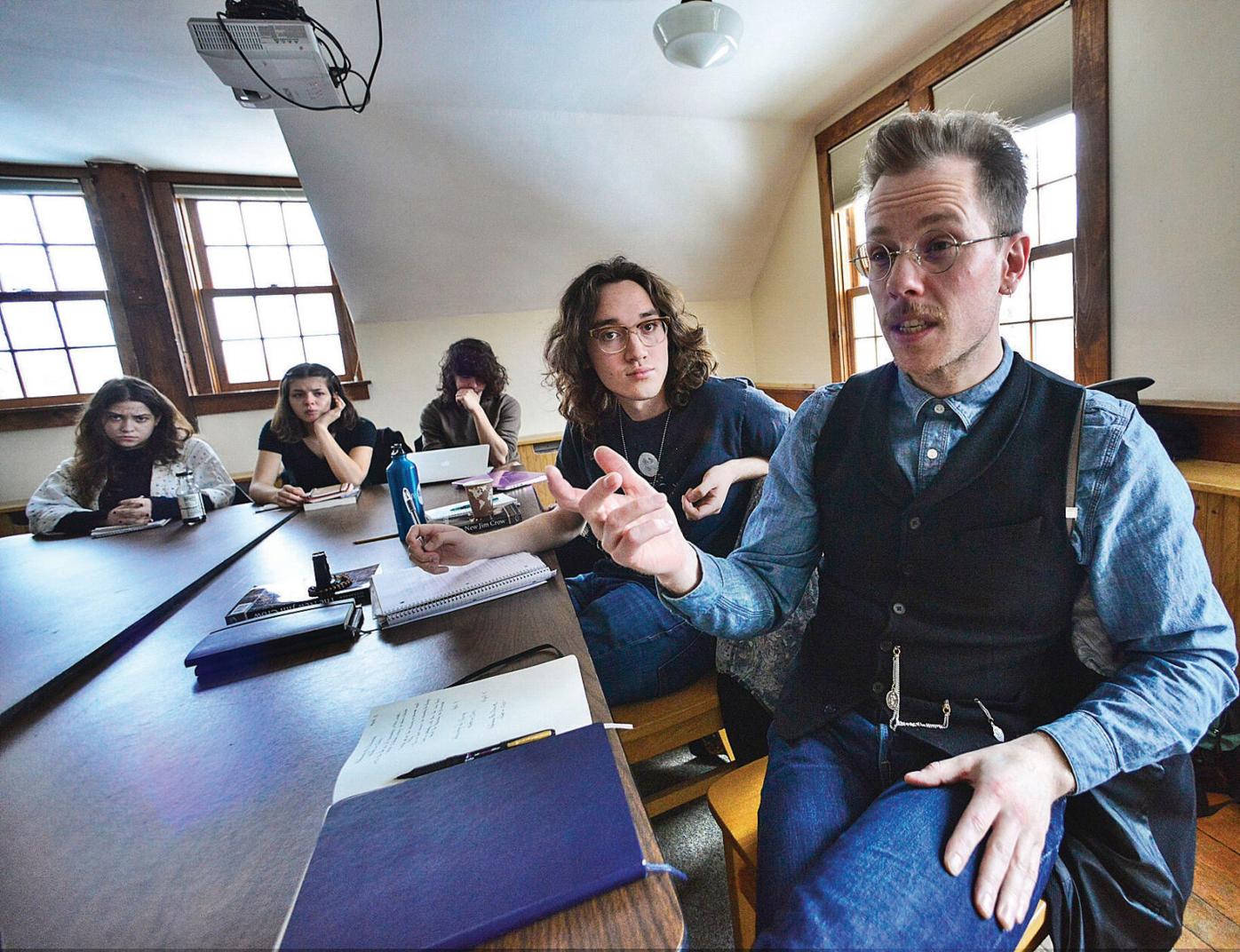 Photos by KRISTOPHER RADDER - THE BRATTLEBORO REFORMERJeffrey Hiam, a student a Marlboro College, talks about his position on criminal justice reform.. 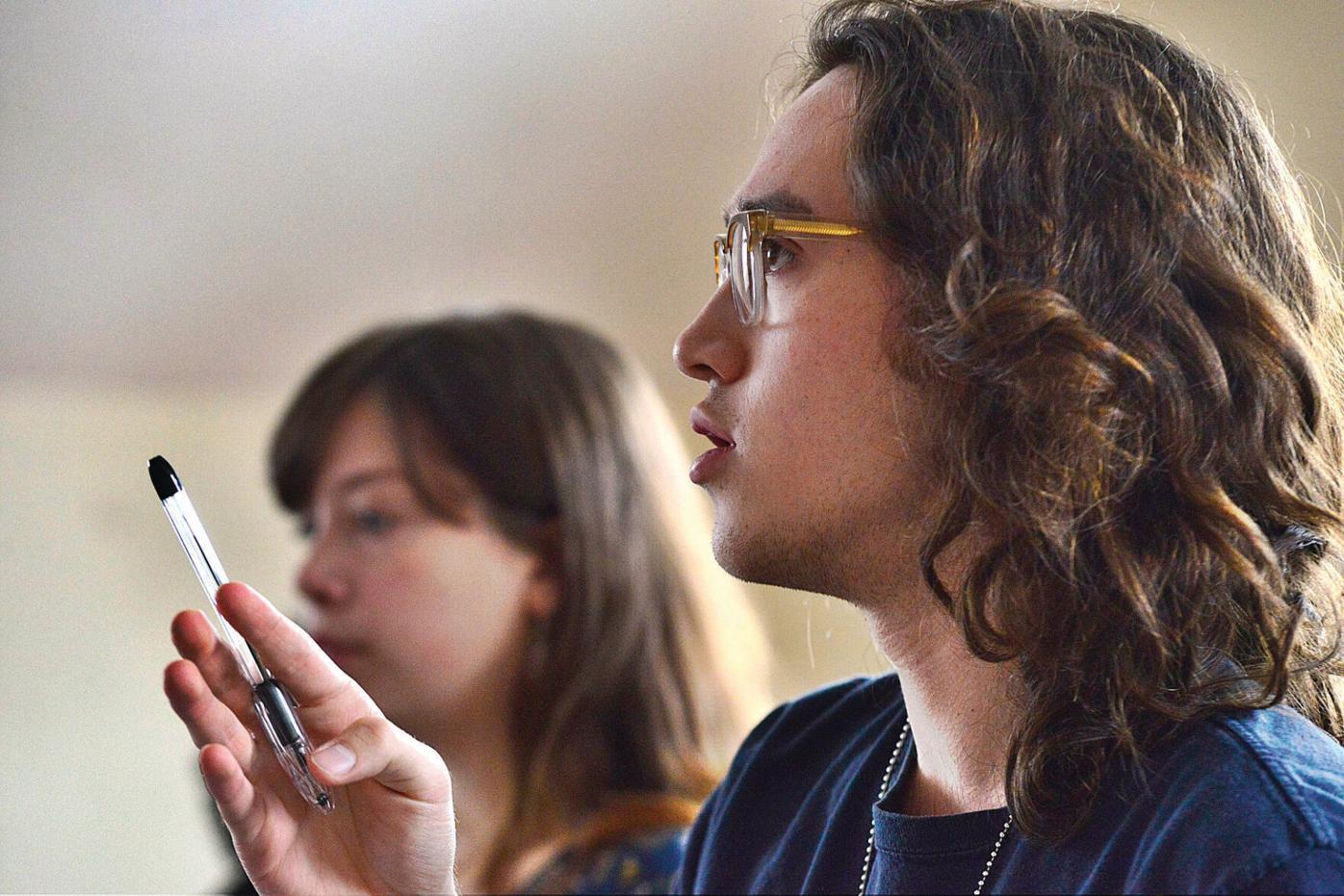 Meg Mott, a professor at Marlboro College, leads the class in a conversation about prison reform.

Photos by KRISTOPHER RADDER - THE BRATTLEBORO REFORMERJeffrey Hiam, a student a Marlboro College, talks about his position on criminal justice reform..

MARLBORO — When it comes to criminal justice reform, a class is coming to terms with the need for compromise.

"I guess what I've been thinking about most in the last month or so is the place where theory and practice meet," student Jeffrey Hiam said during a class at Marlboro College called Speech Matters on Wednesday, April 5. "I think a lot of us came into this program believing in abolition in some form or another, or other viewpoints that are fairly radical. And so how do people with views of radical social change interact in reality? So what's our concrete responsibility and how do we keep from just condemning every single project we see people doing? Because a lot of folks have a bigger picture of criminal justice reform. Some don't."

Students from the class will be making presentations on April 27 at 7 p.m. at 118 Elliot Street in Brattleboro, and at the same venue there will be a reading of works by formerly incarcerated women on April 20 at 7 p.m.

Described on the college's website, Speech Matters "looks at how the current discourse about crime, criminality and punishment restricts our ability to think creatively about criminal justice reform." The point is to re-frame debate around the issues.

Professor Meg Mott asked the class why people end up incarcerated. Citing specific texts, students said things like "racial caste systems," "crimes of poverty" and "the War on Drugs." Also mentioned were "technical violations" — based on probation or parole — which affect those who have served time or have been through the judicial system.

The class had recently visited EMERGE Connecticut, which is run by a formerly incarcerated man who helps other previously imprisoned individuals work in the trades. The organization offers job training and other programming.

"They have a lot of city contracts," Hiam said. "The big selling point is this thing called 'Real Talk.' It's sort of a peer accountability and support model. They're getting honest. They're talking to each other and building community."

Another trip brought the class to Queensboro Correctional Facility in Queens, N.Y. Released inmates from there are being trained to administer Narcan in their communities. The prescription medicine is used in emergencies to treat suspected opioid overdoses.

Professor Nelli Sargsyan said students have been talking with coalitions and groups that work with others on the issues being explored in the class. They have met Glenn Martin from JustLeadershipUSA, who is getting formerly incarcerated people into leadership positions advocating for criminal justice reform; Rick Van Wickler, superintendent at the Cheshire County Correctional Facility and collaborator with Law Enforcement Action Partnership, which is working to put an end to the War on Drugs; organizers from Vermonters for Criminal Justice Reform, which is encouraging the state to stop holding Vermont offenders in private prisons in Michigan while encouraging "compassionate release" for inmates deserving of being released early or immediately for circumstances not known at the time of sentencing; Avenues of Justice, a program that aims to keep youth out of the prison system; and Brooklyn Defender Services, a legal defense organization providing advocacy and education.

Sargsyan said she's interested in aligning goals and looking at how to get over self-righteousness in the process.

Student Willa Chandra is focusing on how stories of incarcerated individuals are told and looking at how sharing those experiences might help others avoid imprisonment.

"I think there are two primary questions I'm interested in," said Adam Wood, student. "One is broadly about audience for written materials and documentaries, the audience they have in mind. Then the second general question is like, what people have done is important but I think just as important is what people think they are doing."

Mott said she is interested in how to use language and rhetoric — on both the left and right side of the political spectrum — to get other values into the dialogue. Those values might include mercy, forgiveness and coalition building.

Assistant Director of Speech Matters Tommy Arsenault said he wanted to explore how to promote conflict resolution and why programming in progressive prisons isn't provided in all prisons.

Student Laurie Wharton said the inside of the Cheshire County Correctional Facility was reminiscent of a preschool, "colorful and welcoming when you walk in."

"They have cameras everywhere so they sort of enforce rule upon the place with a lot of surveillance," Wharton said. "They talk about how they don't have to use force a lot."

Students questioned the effectiveness of incarceration.

"Putting someone in a box where they're treated horribly," Zoe de Hart said, "is short-sighted and irresponsible."

Some people are anti-social in a way that is too dangerous for them to live with other people, Hiam said when the class was asked whether imprisonment was wrong in all cases.

"We incarcerate more people than anyone else in the world," Hiam said of the United States. "If this thing was going to work in the world, it would be working here."

According to prisonpolicy.org, the U.S. incarcerates 716 people for every 100,000 residents. The country's rate of incarceration is more than five times higher than most other countries in the world.

Believing in criminal justice reform "doesn't make me an anarchist," Hiam said, noting the relationship between guards and inmates witnessed by the class at Queensboro Correctional Facility had been humane. "I thought there was good happening there. Obviously, it's imperfect."