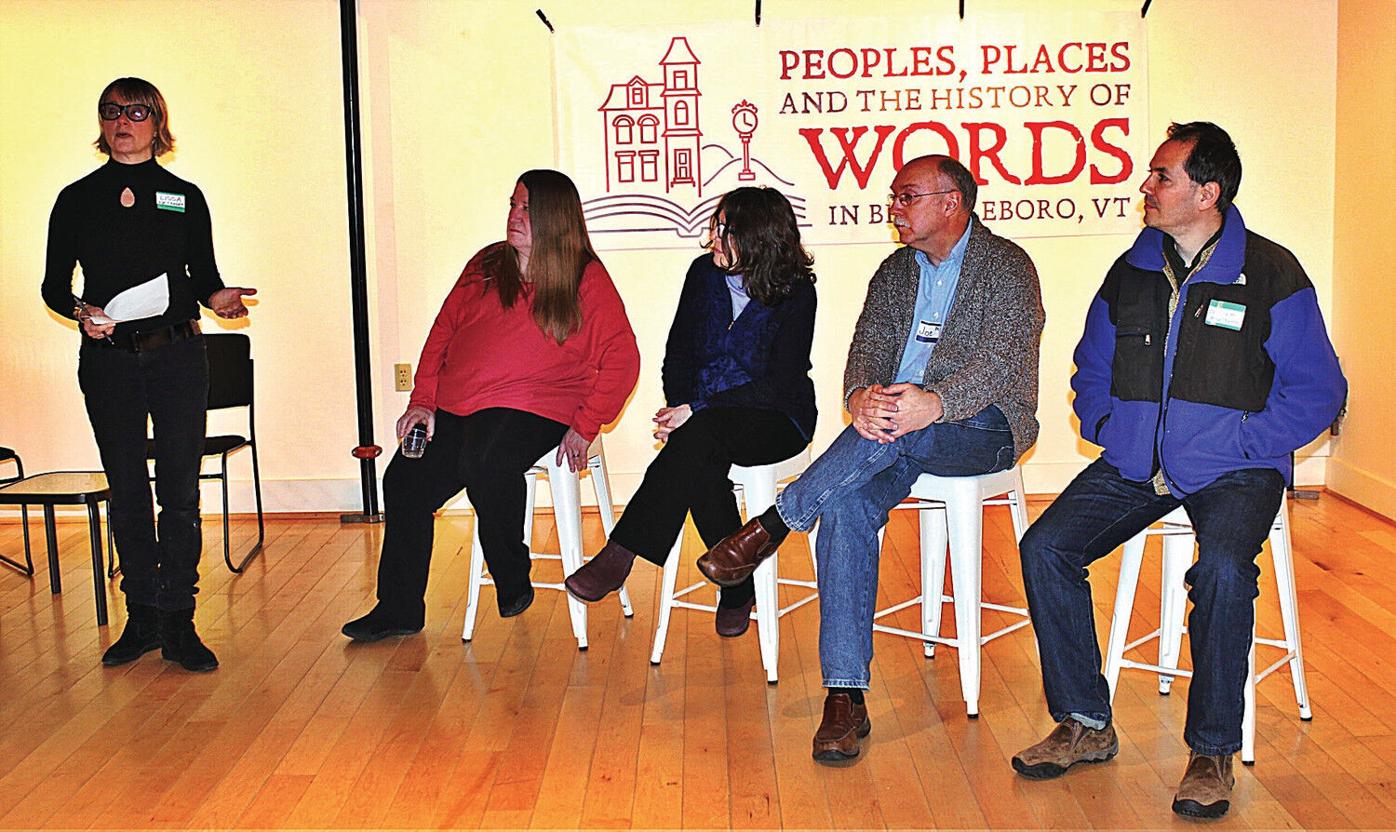 Lissa Weinmann, Sandy Rouse, Arlene Distler, Joe Rivers and William Edelglass (from left to right) discussed how the Words Project will work with the community to produce walking, biking and driving audio tours on a website to bring the cultural history of the Brattleboro area alive on the web.

About 40 participants listened to presenters to learn how to participate in 'collective community creation' of audio tours and maps that will help attract greater interest in the Brattleboro area . 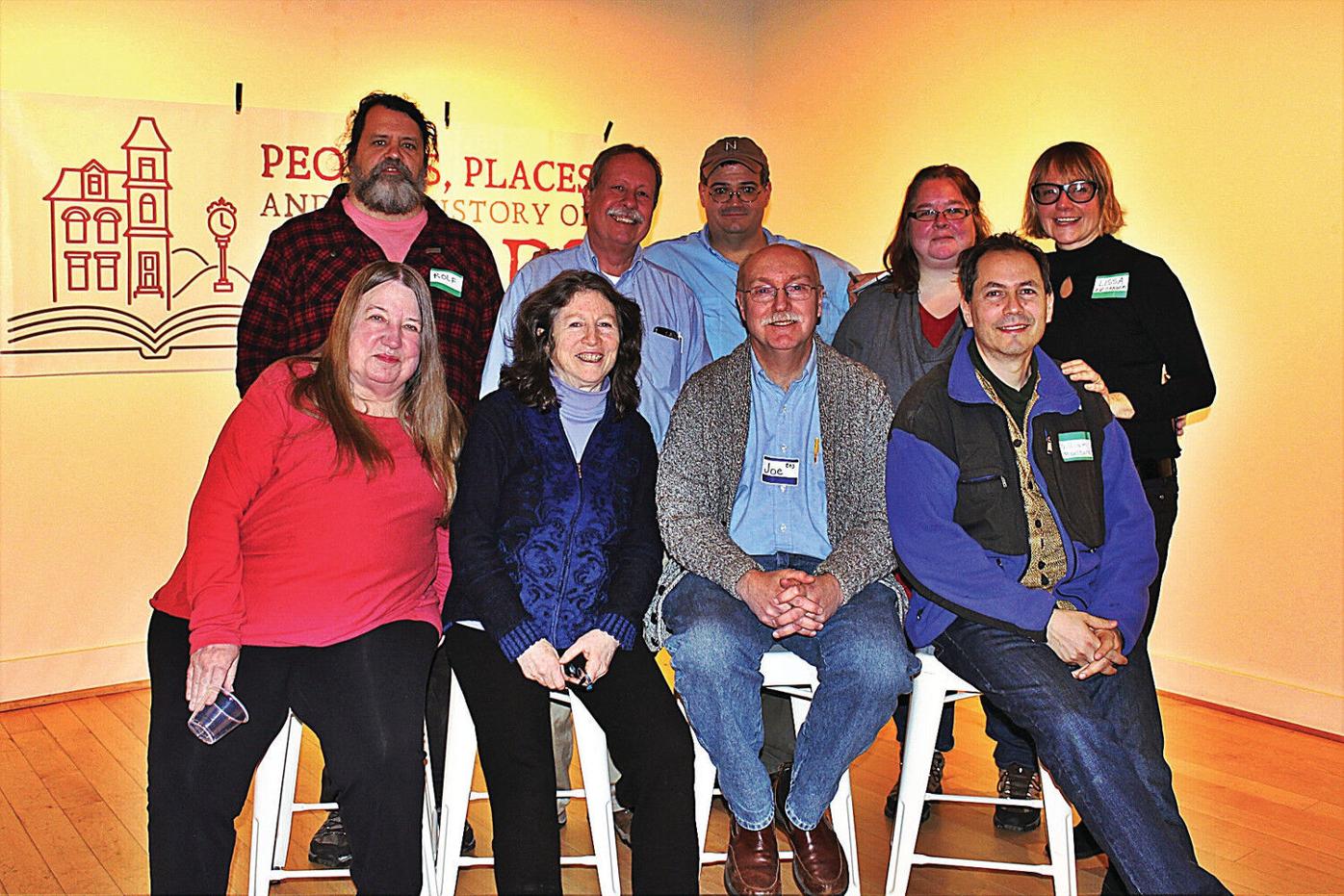 Lissa Weinmann, Sandy Rouse, Arlene Distler, Joe Rivers and William Edelglass (from left to right) discussed how the Words Project will work with the community to produce walking, biking and driving audio tours on a website to bring the cultural history of the Brattleboro area alive on the web.

About 40 participants listened to presenters to learn how to participate in 'collective community creation' of audio tours and maps that will help attract greater interest in the Brattleboro area .

Windham County has a rich history with words, at least that's what the folks at the Peoples, Places and the History of Words in Brattleboro say. The organization is a coalition of different Windham County groups aimed at exploring the area's history through literature and words.

The group's Words Project was only conceived in February. Already, though, it has an impressive list of backers and collaborators. Last Thursday, more than 40 community members had a potluck at 118 Elliot St. to talk about the project and their roles in it.

The idea behind the project is to connect Brattleboro's sense of place through stories.

"A deeper appreciation of the written word, and all the social systems, language, education, capital, technology necessary to support a culture of writing, will help us be more thoughtful in our own use of the written and spoken word and more attentive to the great power of words," William Edelglass, a professor of philosophy and head of the environmental studies department at Marlboro College and the lead academic in the project, wrote about why the project's focus is on words.

The project has a wide scope, but the main goal is to offer podcasts detailing Windham County's history that can be listened to during guided biking, walking, and driving tours. The podcasts will be created by Windham County students and community members that the project is calling Research Pods. The Brattleboro Historical Society, one of the project's partners, is already creating podcasts with Brattleboro Area Middle School about Brattleboro's history.

"[The project is] everything we've already been doing but with so many more people and a budget," Reggie Martell, a historical society board member, said. "We all hopped on a train that's heading in the same direction."

This is the sentiment of a lot of the collaborators.

Both Martell and Distler credit Lissa Weinmann, the project director, with giving them more resources and bringing the groups together.

"That's what Lissa does," Martell said.

At Thursday's potluck, members of the Brattleboro Literary Festival, Marlboro College, and the Windham Southeast Supervisory Union were also present.

The project is meant to both encourage tourism and give locals a better sense of place.

"Although the project will help attract tourism and wider interest in our area, its real heart is building relationships within the community among people that might not otherwise have a reason to interact," Weinmann wrote to the Reformer in an email.

Already the Words Project has hit the ground running. At the Brattleboro Literary Festival in October, the organization debuted a mobile museum about Lucy Terry Prince — the previously mentioned African American poet — called "Lucy Speaks." And, by September, the project had received a National Endowment for the Humanities Creating Humanities Communities grant. The grant will match donations to the Words Project up to $150,000 over three years.

Hilary Twining, the director of corporate and foundation relations at Marlboro College, presented the grant to the project. She said the college is interested in working with other educators to fine-tune ideas about place-based education.

"The idea with this NEH grant program is about bringing humanities into the local community and having as broad a coalition as possible to bring humanities to light and put your own stamp on it," she said.

There's a big focus on education.

Julianne Eagan, the WSESU curriculum coordinator, explained that social studies is a challenging subject for students.

"Place-based education allows students an entry point to where they live and what it's like in the past. From that they can see how concepts apply to greater trends historically, or, 'this is how it applies to how I can understand myself today,'" she said. "It really gives students a new lens when they learn to see their environment through the lens of the past. It changes how they interact with their local community."

One of Weinmann's goals is to explore multiple viewpoints and stories.

Judy Dow, an Abenaki educator, is one of the scholars the Words Project is working with to educate local students. She teaches science, history, and math through art. She focuses on the oral stories of Abenaki tribes to map out Vermont's geography.

Dow has students map out the layers of the Earth's crust by panting yogurt containers, or they map a path into the woods by decorating cloth with the different plants that grow along the path.

Decorating items with these mnemonic devices is an Abenaki technique. It lets students see the world from a different perspective.

She said she'd seen about four or five different historical markers in Windham County. "The question is, whose history?" she said.