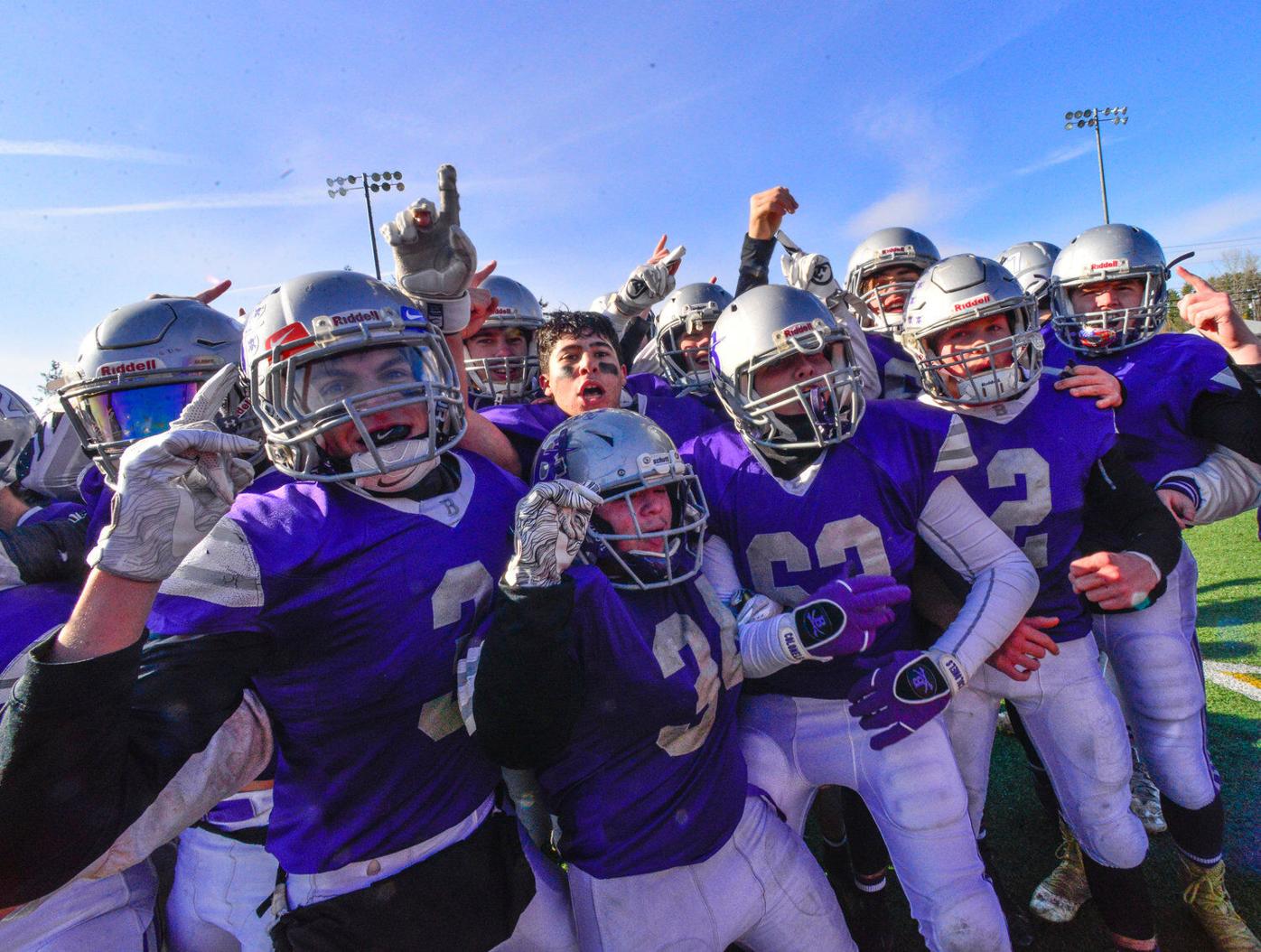 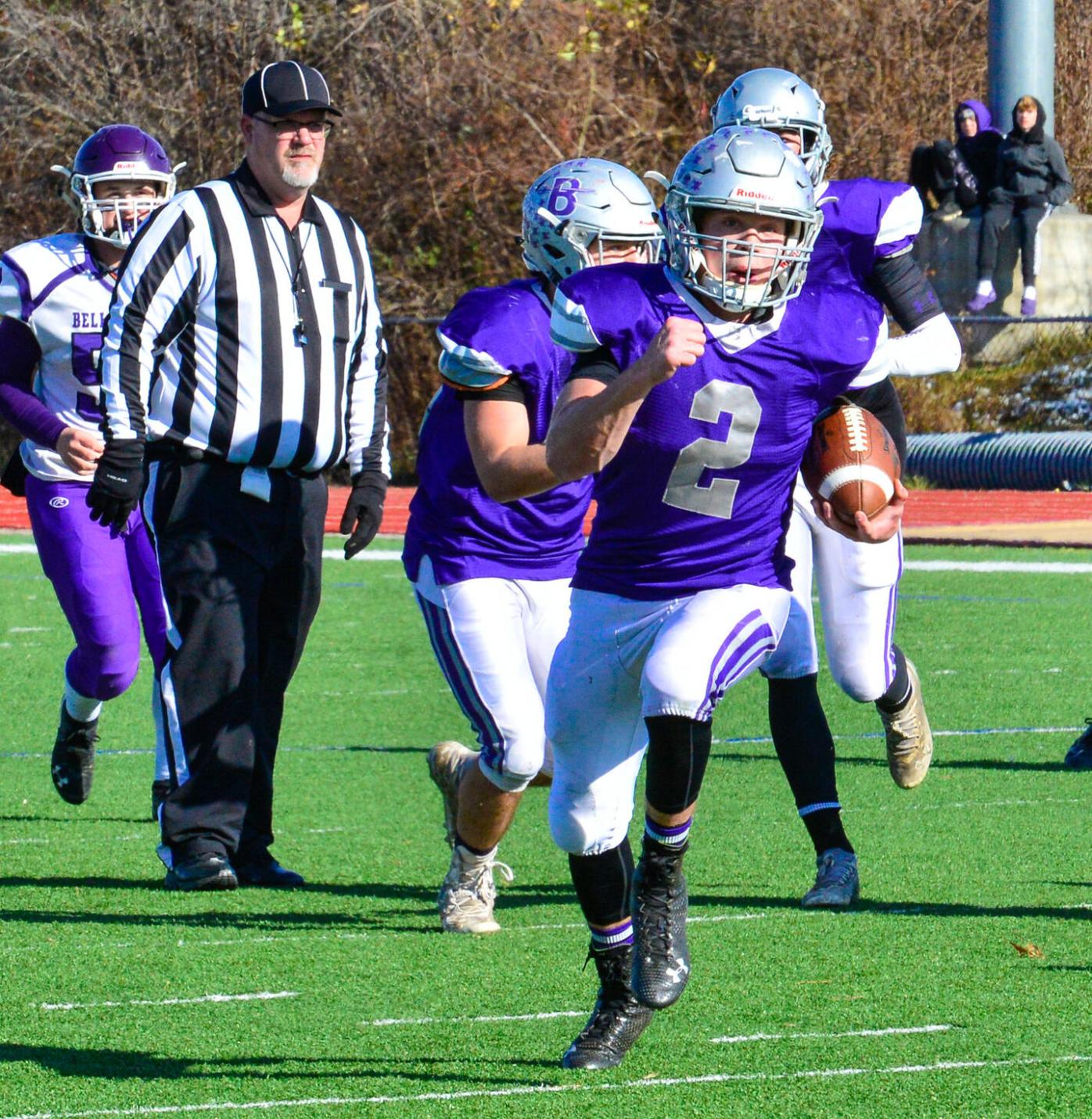 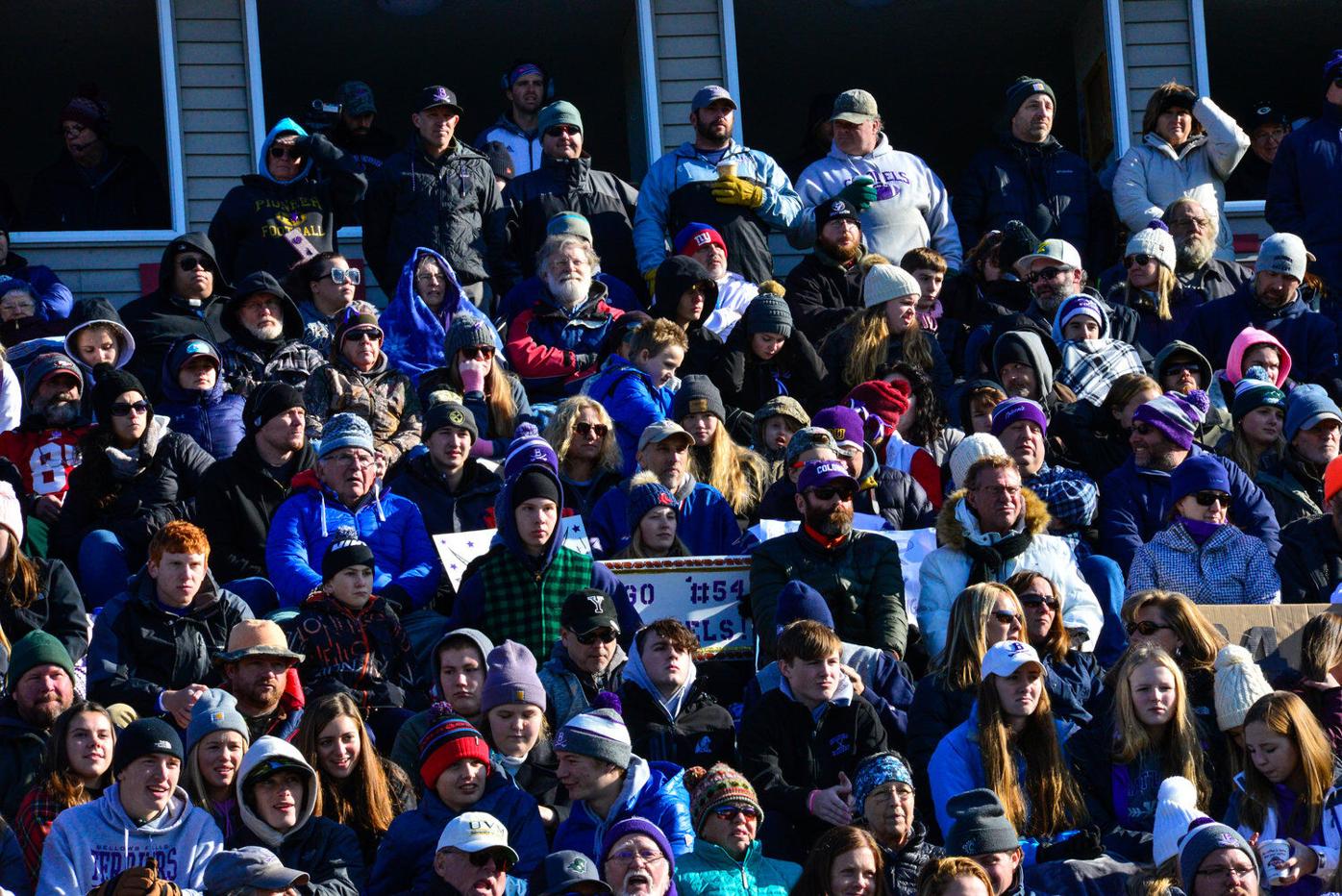 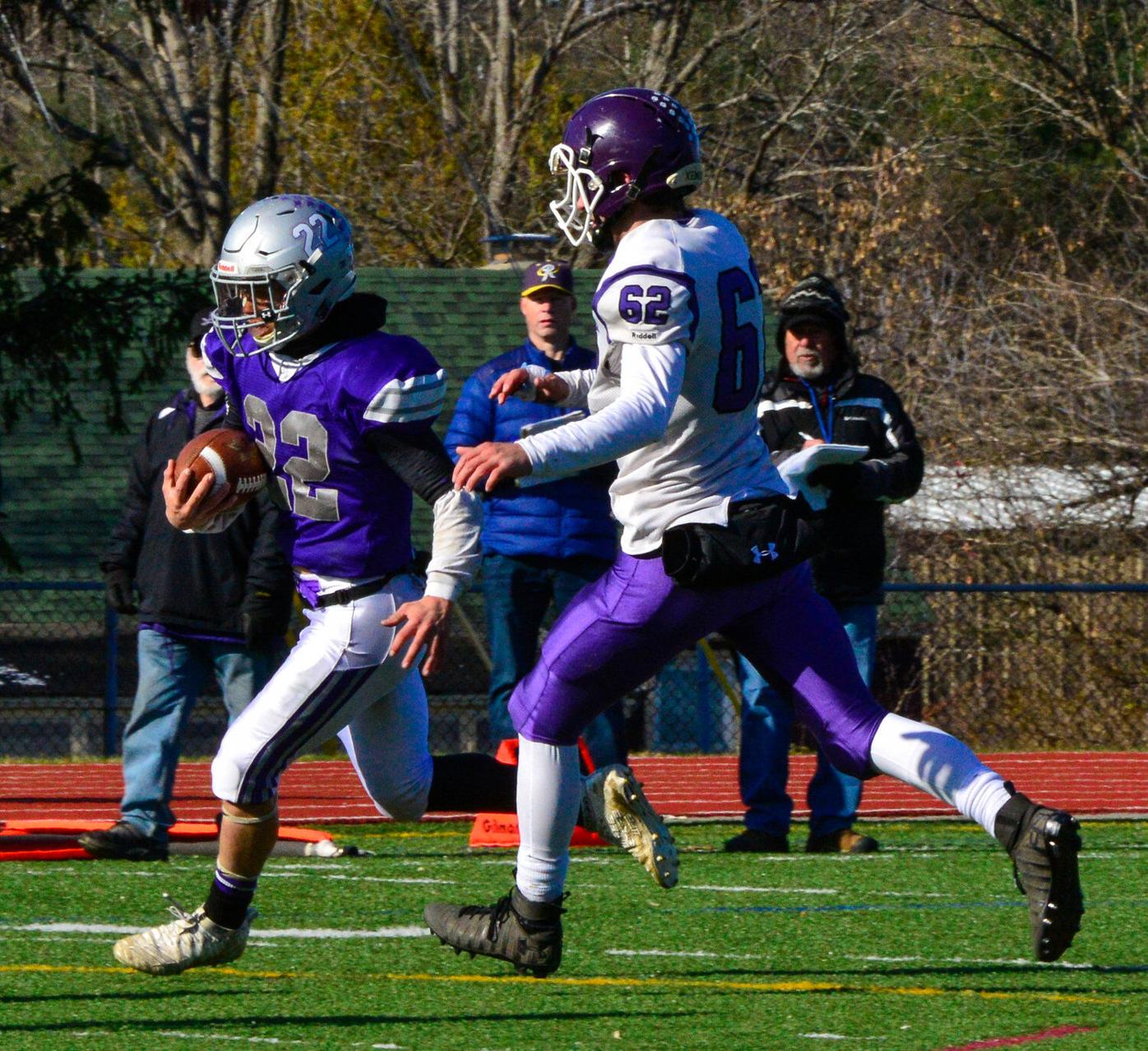 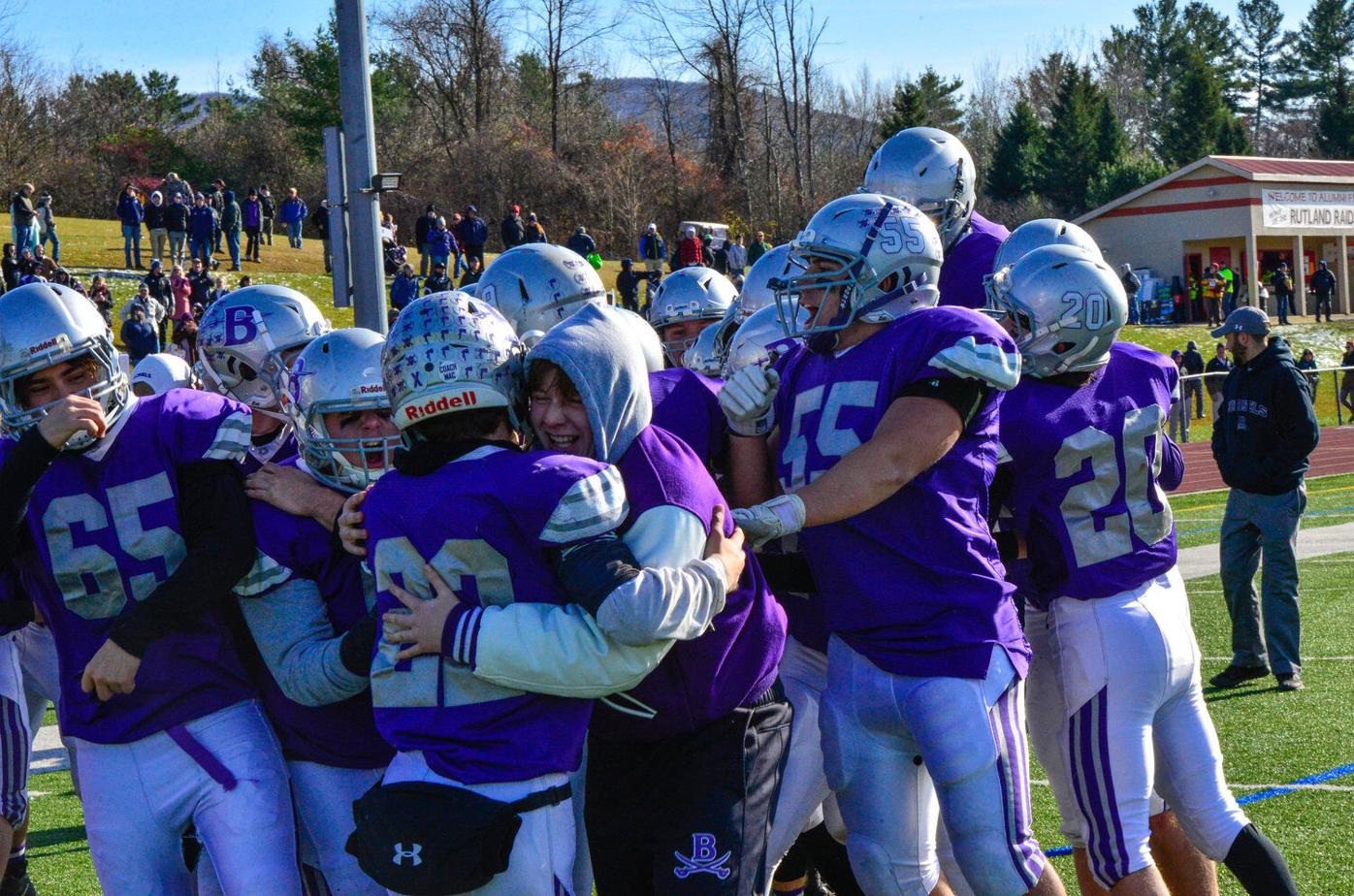 RUTLAND — Tyler Millerick and his mother now have something extra special in common.

Both have helped a Brattleboro Union High School team to an undefeated season.

Twenty-seven years after Courtney Christmas and the BUHS softball team went 19-0, Millerick and the top-seeded Colonels defeated No. 3 Bellows Falls 46-7 in the Division 2 football state championship game at Rutland High School on Saturday.

"I can't even put it into words," said winning coach Chad Pacheco, whose team improved to 11-0. "It's huge. It's awesome."

Millerick threw for 144 yards and two scores and ran for 56 yards and one end zone appearance, giving him 50 total touchdowns this season. His mom, who had a .520 batting average for the school's 1992 softball team, was in the stands cheering him on.

"He (Millerick) is one of a kind. He's probably going to be playing football on Saturdays," noted Pacheco.

After Frost broke up a pass that ended Bellows Falls' 10-play opening drive and the Terriers punted, the senior running back raced 98 yards up the middle to give Brattleboro the lead midway through the opening quarter.

The Colonels went up 14-0 on a five-yard dive by Frost. Jed Lober then answered with a three-yard blast to paydirt to make it 14-7.

It was all Brattleboro from that point on.

Millerick scored from 28 yards out, Frost added a 75-yard rushing TD, Millerick connected with Henry Thurber (5 catches for 71 yards) on a four-yard scoring strike, Frost tacked on a nine-yard run to the house, Millerick hooked up with Trinley Warren (4 catches for 25 yards) for a four-yard TD pass, and Reed Sargent made four extra points.

Joe Koes, Spencer Lawrence, Timmy Velazquez and Cohen all had a sack for the Brattleboro defense during this "Backyard Brawl." Conrad Auerbach, Aaron Petrie, Thurber and Frost all broke up a pass.

"When it got to the second quarter, I was thinking 'holy smokes, this is going to be our year,'" stated the BUHS coach.

It was the program's first football state title since 1973, when John Leary racked up 283 yards from scrimmage in a 28-0 victory over BFA-Saint Albans.

Lober ended up with 16 carries for 76 yards to lead the Terriers, who finished up with an 8-3 mark. Quarterback Griffin Waryas completed eight passes for 60 yards in his team's first loss away from home in 2019.

This was a rematch of the season opener, when Brattleboro came back from a 19-point deficit to beat the Terriers 49-26. The Colonels went on to run the table.

"They're a team," responded Pacheco, when asked what makes this group special. "They care about one another. They have great work ethic."