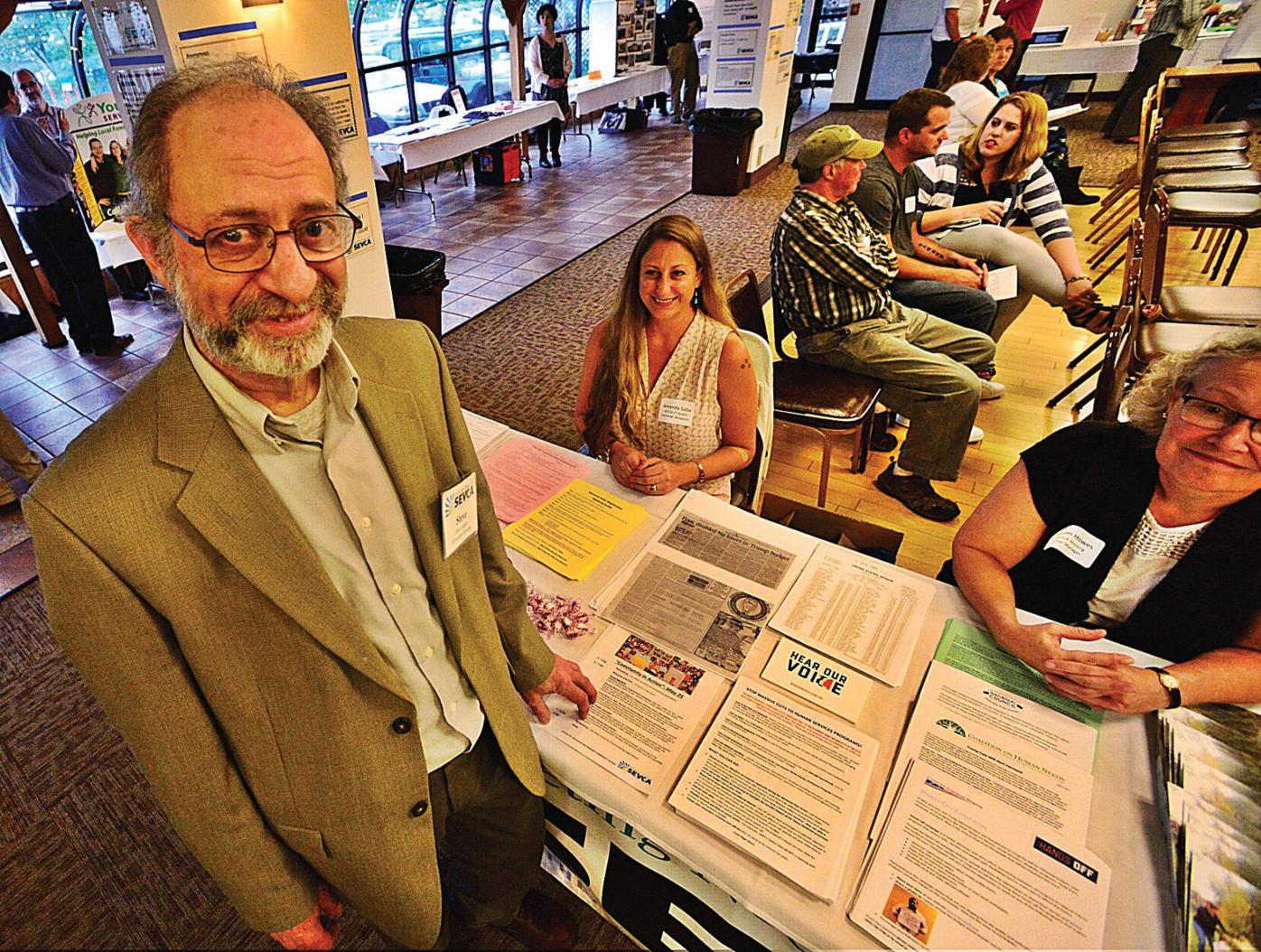 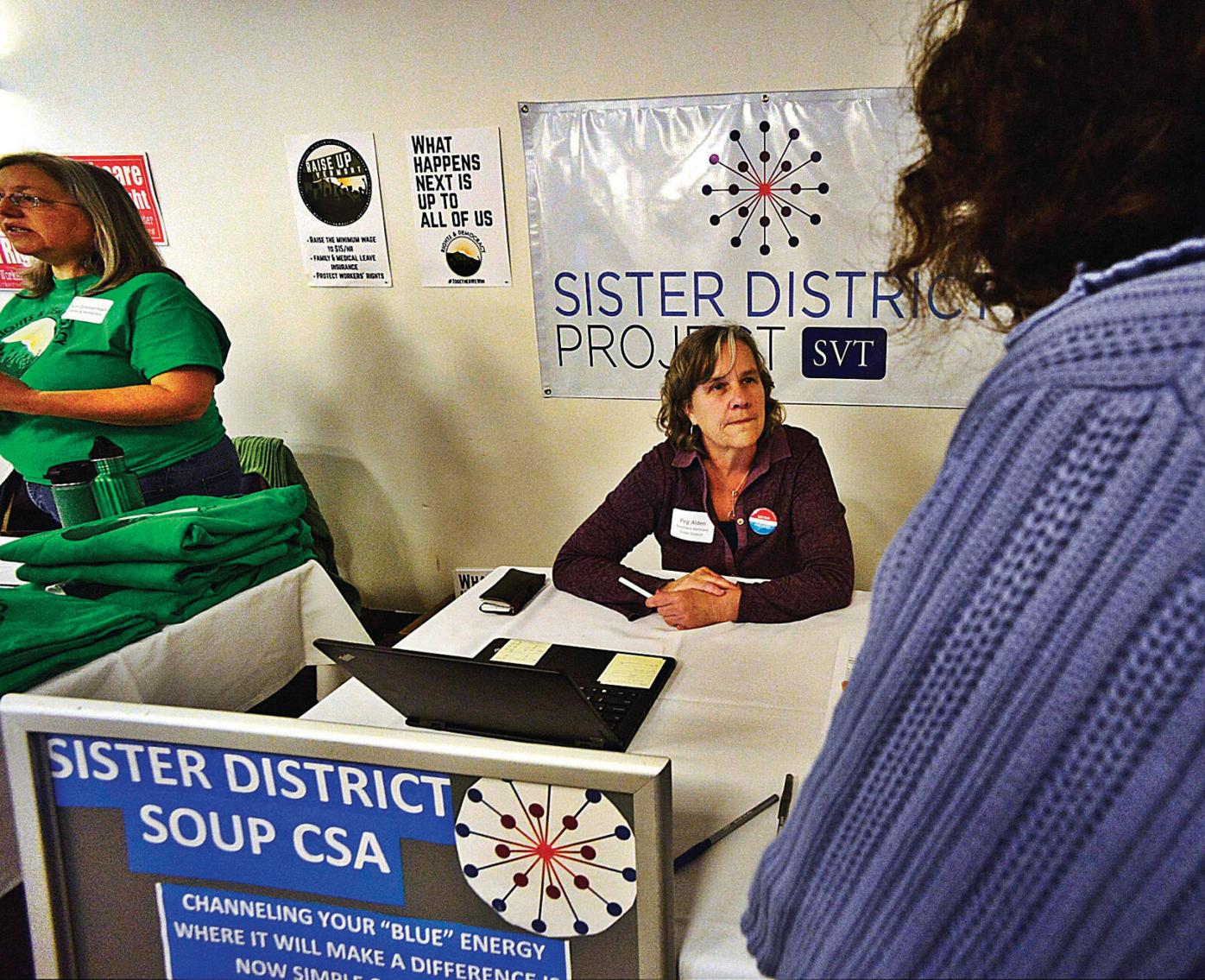 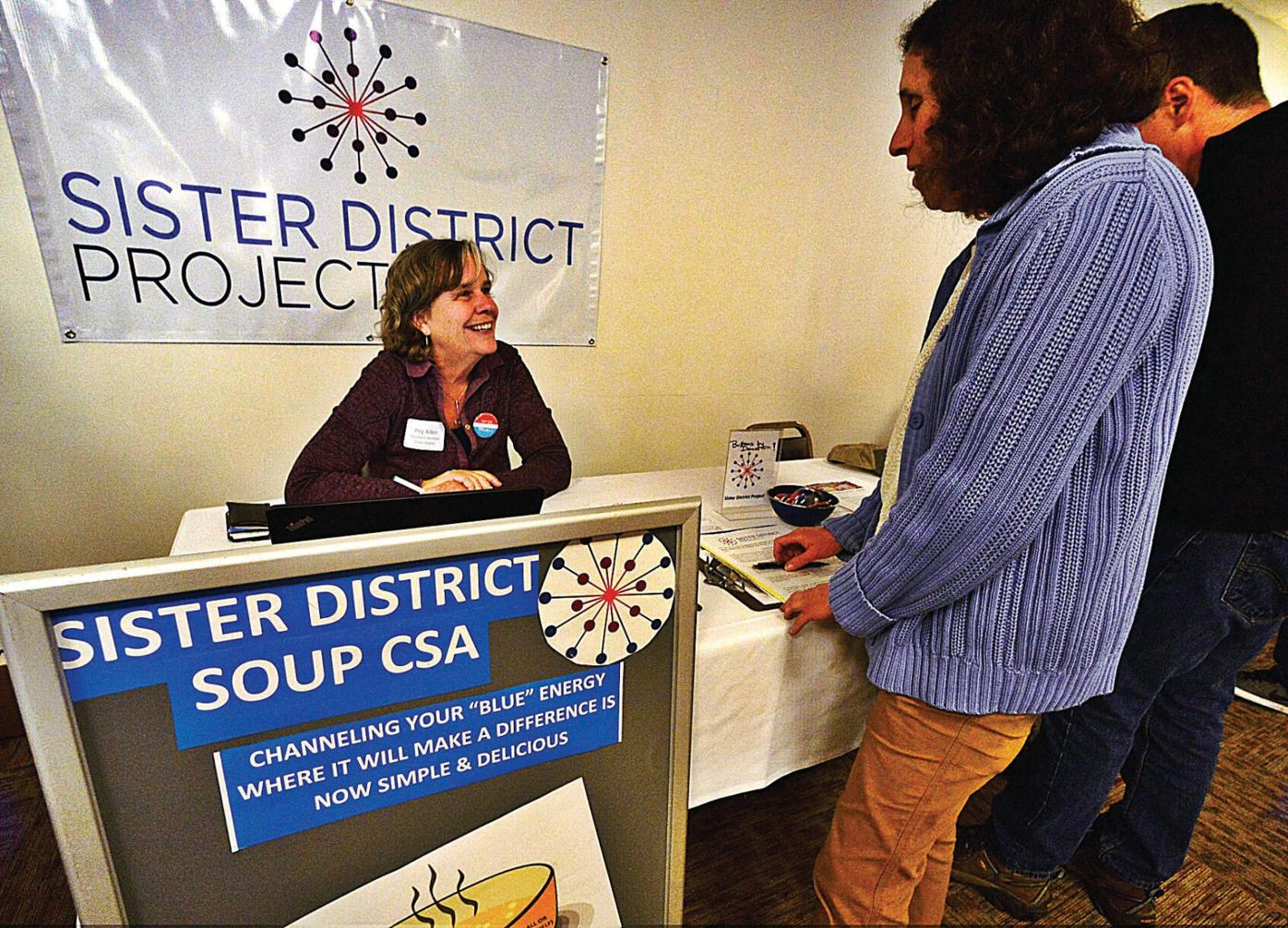 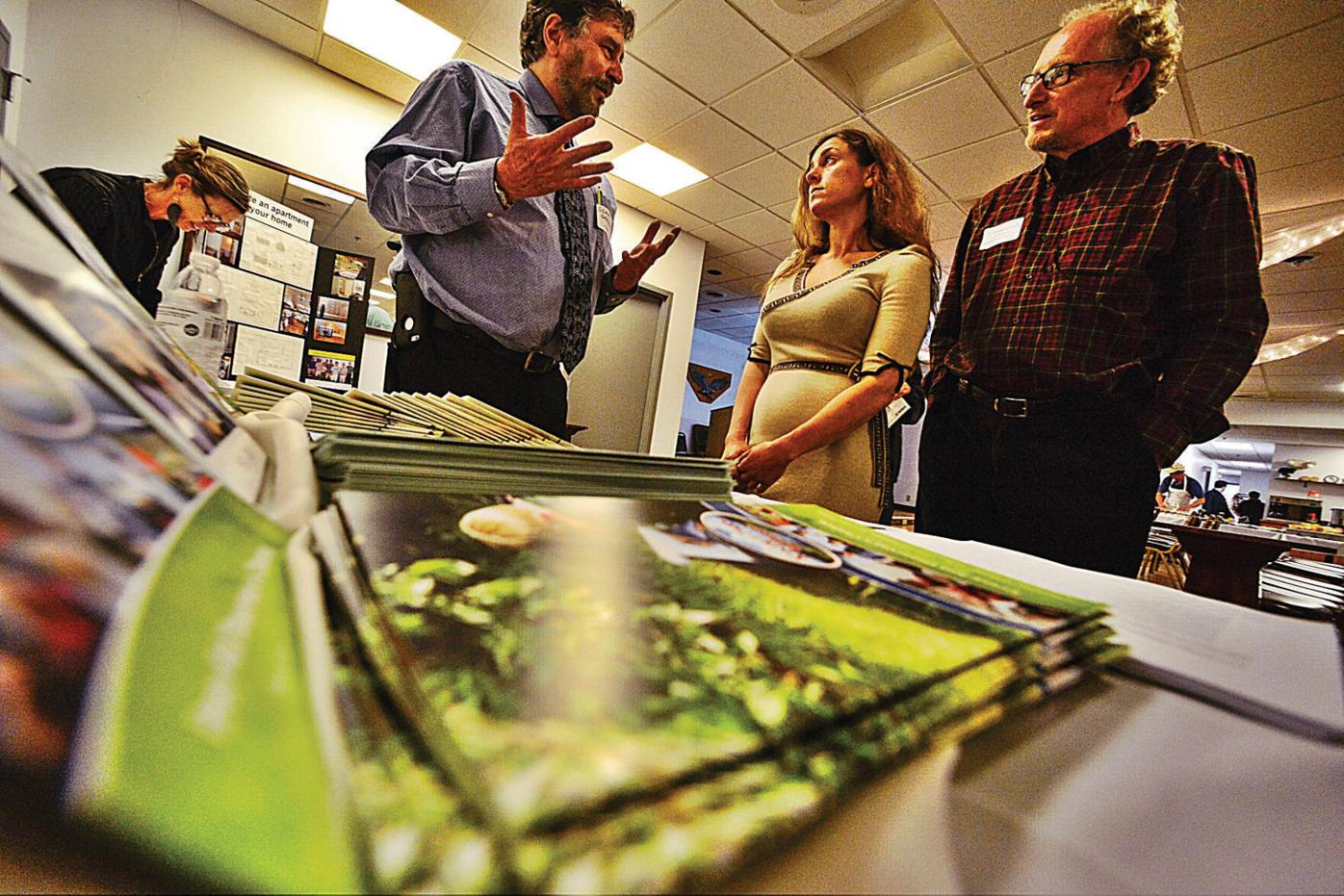 George Karabakakis, of Healthcare & Rehabilitative Services, talks to Jessica Greene, of HCRS, and Will Shakespeare, from HCRS, during a Southeastern Vermont Community Action event on Thursday, May 25.

George Karabakakis, of Healthcare & Rehabilitative Services, talks to Jessica Greene, of HCRS, and Will Shakespeare, from HCRS, during a Southeastern Vermont Community Action event on Thursday, May 25.

BRATTLEBORO — Local organizations against proposed cuts to federal funding are displaying a new source of power by strength in numbers.

"We hope everyone takes some action on behalf of the organizations providing activities and initiatives in their communities or takes some ideas to follow up on," he said at the Fraternal Order of Eagles on Chickering Drive in Brattleboro after mentioning plans for holding similar events in the future.

The idea of such gatherings, according to Geller, is to inspire local residents to become more engaged in civic life.

A booth for Sister District Project's Southern Vermont chapter set out to get local residents to promote Democrats campaigning in traditionally red states.

A program for soup made with community-supported agriculture "has been wildly successful so far," she said.

Kate Ash, field representative from the office of U.S. Sen. Patrick Leahy, D-Vt., called Vermont "a leader in the work that we do."

"We have a truly unique position to set the stage for how to treat our people well," she said, calling to mind programs offered in schools throughout the state to ensure kids get meals no matter their situation at home.

Hungry Free Vermont, which addresses food insecurity for low income residents, is worried about potential funding cuts to Supplemental Nutrition Assistance Program or SNAP. For Vermont, that would be 3Squares, which provides resources and programs to get food on tables. Meeting attendees were signing a petition in opposition to such cuts.

"It really does make a difference," she said, asking attendees to provide feedback — good or bad — to her boss. "Keep fighting the good fight along with us."

Katarina Lisaius, staff assistant for U.S. Sen. Bernie Sanders, I-Vt., said the Trump budget announced on May 23 "constitutes a massive transfer of wealth from working families, the elderly, the children, the poor and the sick to the top 1 percent."

"It says if you're the richest, you can get up to a $52 billion tax break through the repeal of the estate tax," Lisaius said. "But if you're the poorest, the lower income senior citizen, a family struggling to make ends meet, it says no you cannot receive your Meals on Wheels and no you cannot receive your 3Squares benefits that may help you get fed until the end of the month."

Lisaius said the proposed budget also makes it tougher to get education and health care. She called on attendees to reach out to legislators with strong and innovative ideas.

"Trump's budget is immoral," she added. "It's not for working families. It's not for the middle class. It's the budget for the billionaire class and it must be defeated."

"Yes, yes," someone in the audience agreed, followed by a round of applause.

Health care policy improvements are wanted by the Vermont Workers' Center Windham County chapter. Petitions and stories were being collected by representatives of the group. They will be passed along to the Green Mountain Care Board, which was created with the purpose of reducing the rate of health care cost growth in Vermont.

"We're really being helped because health care is being attacked on the federal level," said Mark Tully, of the Vermont Workers' Center.

"There are so many colleagues here," Veller said. "I am so proud in the way in which Vermonters work together."

MaryLou Beaver, New England Campaigns Director at Every Child Matters, said 81 percent of the country's human-needs programs have been cut from fiscal year 2010 to FY17 and only 19 percent had any expansion. Out of 167 programs tracked, she said, 135 of them saw cuts.

More cuts are on the way with Trump's proposed budget, Beaver warned. She said for Vermonters getting SNAP benefits last year, 49,847 households could see reductions and 3,532 households could lose them altogether. And programs offering heating assistance to low-income households are proposed to see cuts.

Those stories are being collected now at chn.org and handsoff.org.

"It's already an under-funded system," he said.

Curtiss Reed Jr., executive director of the Vermont Partnership for Fairness and Diversity, said his group was in the 13th year of a 40-year initiative to mold a "multicultural future" for the Green Mountain State. The goal is to make Vermont a place where more people of color want to work, study, retire and invest.

"We tend to think of our work as dropping pebbles in the water," Reed said, recalling how efforts started 10 years ago to analyze traffic-stop data collected by the Vermont State Police have led to making the agency "arguably the best state law enforcement around fair and impartial policing."

The data may not have changed much, Reed said, but the culture is "unparalleled" to other state agencies across the country.

A pebble has also been dropped in the world of education. Reed said those graduating from state-approved programs are now given background and training in diversity and inclusion.

"But it took a decade for that to actually happen," he said, later adding, "There's a lot to celebrate. Again, this is a basic economic development argument that we need to bring more people into the state. We need greater revenue. We need more people to create businesses and, you know, the old model of attracting white heterosexual males with family incomes of $120,000 or more to the state just doesn't hold water anymore."

Fourteen out of 100 white adult residents in Vermont have businesses that employ people, according to Reed. And out of 100 adult Vermonters of color, 23 are business owners that hire employees.

"So if you were going to look for a way to strengthen your economy, where would you go?" Reed asked. "Which pool would you draw from?"

Matthew Wright, of Indivisible-Brattleboro, said Progressives "still believe in citizenship" and are looking for new ways to express that while defending their core values that are under attack by the Trump Administration. His group works with elected officials to do so.

"We're not the answer to everything but we're an important part of the puzzle," Wright said.

Ann Zimmerman, of Rights and Democracy, told the Reformer she felt it was important to resist Trump "fiercely." The Vermont/New Hampshire group got its start after Sanders officially announced his bid for president in the summer of 2015, with the goal of promoting a progressive agenda focused on climate, economic and racial justice.

"For me, it really resonated," Zimmerman said.

The next local meeting is scheduled for June 8 at 6:30 p.m. at the Brattleboro Food Co-op's community room.

Vermont Senate Majority Leader Becca Balint, the last speaker at the event, told attendees to call Gov. Phil Scott about the state budget if they had not done so already.

"[Scott is] holding the budget hostage on a completely separate issue on union busting," Balint said, encouraging compassion in conversations on difficult issues.

That was needed for Balint this year as Vermont lawmakers dealt with legislation on death with dignity, vaccinations and marijuana legalization. At times, Balint said, she had to contact people who were angry about a particular vote or about not returning a call fast enough.

She wondered aloud, "How do we not succumb to despair? How do any of us make meaning in this Trumpian era?"

"For me, I think it all starts with renewed curiosity," Balint said. "Tonight I want to ask you this: What brought you to this work? What fired you up? What gives you hope? Because we need it. There's a shortage of it, people. I need you to dig deep and find what brings you to this work."

After the formal speeches, attendees walked around the hall where groups had tables set up, discussing different issues as well as the future of the country and state.