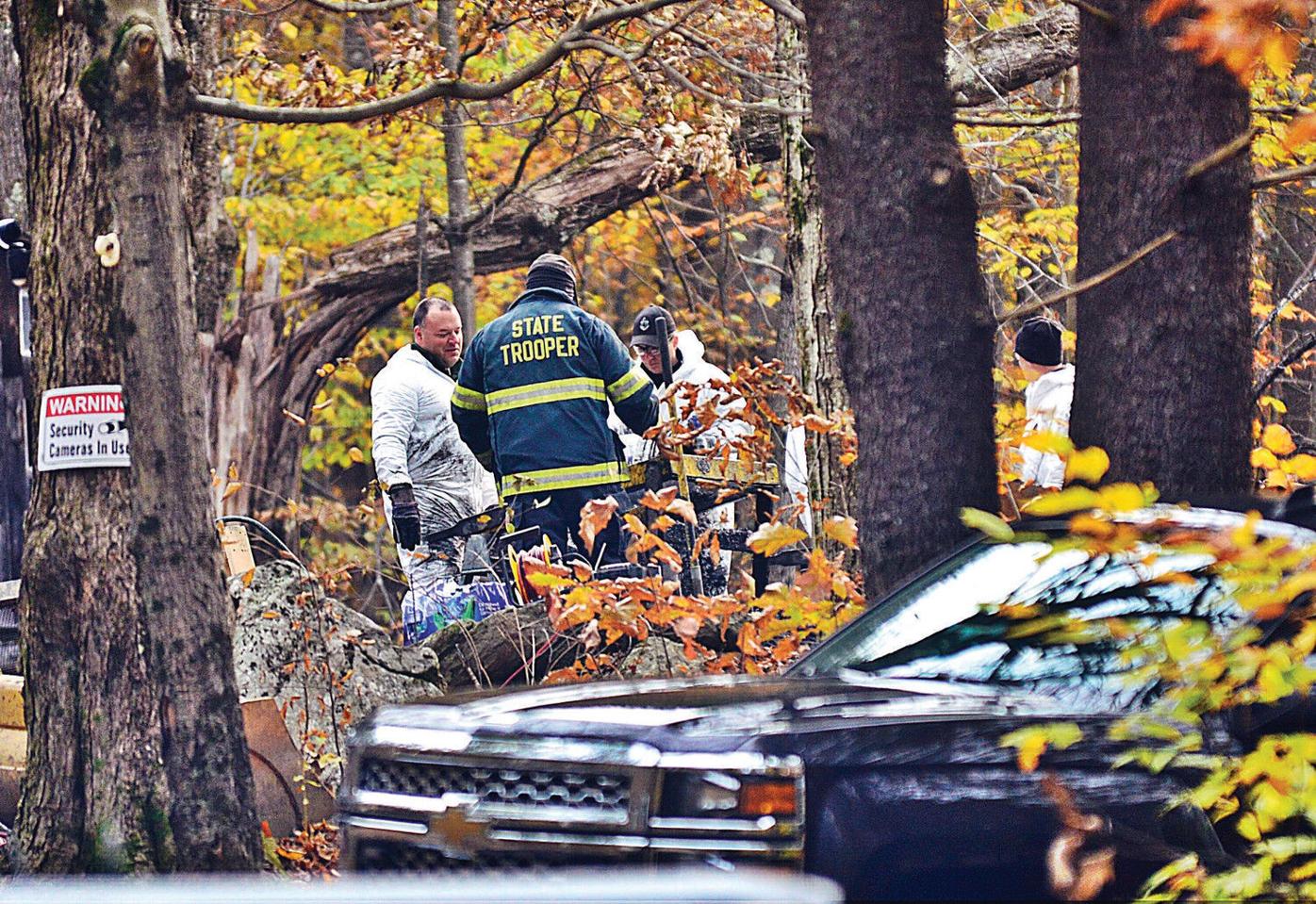 Investigators with the Vermont State Police sift through debris looking for clues into the fire at 163 Shirley Circle in Townshend on Wednesday. Windham County State's Attorney asked for and received an arrest warrant for Justin Orwat, age 46, of Springfield, Mass., for the offenses of aggravated murder and first-degree arson after the bodies of Steven Lovely, 43, and Amanda Sanderson, 35, were found. 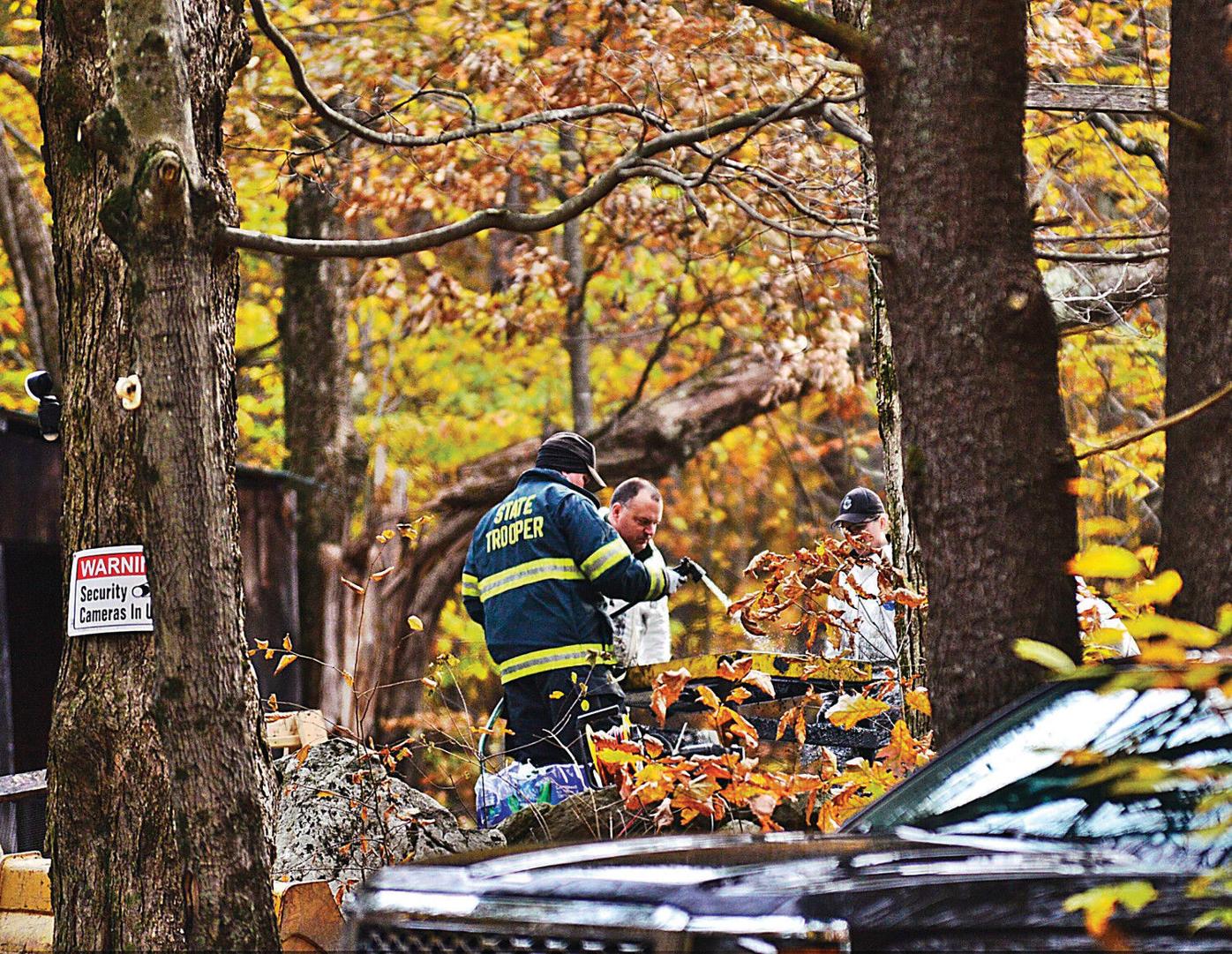 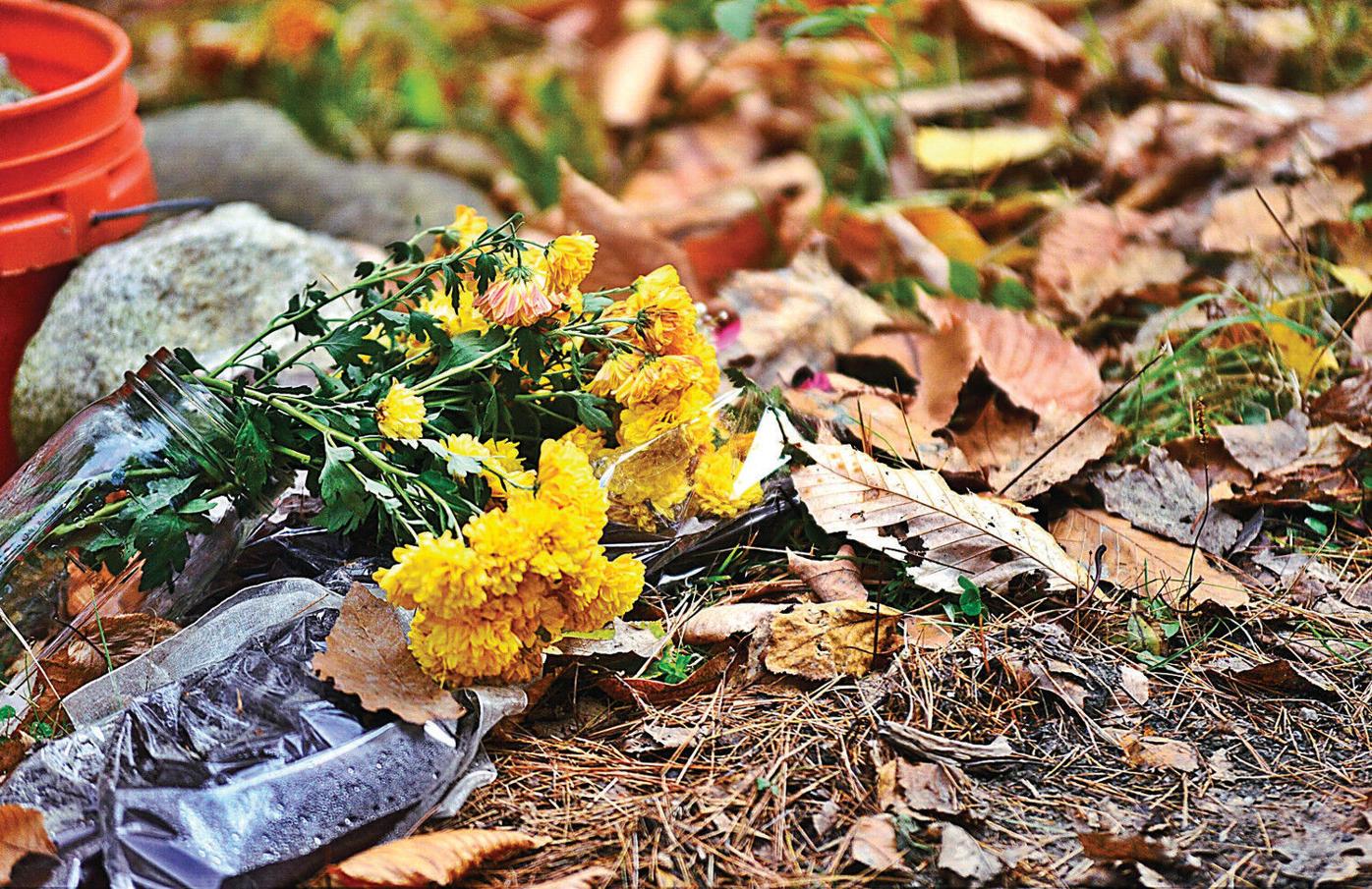 Investigators with the Vermont State Police sift through debris looking for clues into the fire at 163 Shirley Circle in Townshend on Wednesday. Windham County State's Attorney asked for and received an arrest warrant for Justin Orwat, age 46, of Springfield, Mass., for the offenses of aggravated murder and first-degree arson after the bodies of Steven Lovely, 43, and Amanda Sanderson, 35, were found.

TOWNSHEND — The deaths of two people whose bodies were found in the burned-out remains of a cabin at Shirley Circle have been ruled a homicide, death by gunshot.

According to a statement from the Vermont State Police, the Windham County State's Attorney asked for and received an arrest warrant for Justin Orwat, age 46, of Springfield, Mass., on charges of aggravated murder and first-degree arson. These charges are a result of an ongoing investigation into the house fire that occurred on Friday morning, Oct. 27 in Townshend. Orwat is being held at the Hamden County jail in Massachusetts on unrelated criminal charges.

The two victims were named in the press release as Steven Lovely, 43, and Amanda Sanderson, 35, both of 163 Shirley Circle.

The investigation began shortly after the fire, which was called in at 9:34 a.m., was extinguished. The caller reported hearing an explosion and that the residence at 163 Shirley Circle was on fire. After the investigation began, a nearby neighbor told detectives that at approximately 8:45 a.m. that day he heard "three quick consecutive gunshots" and was sure "it was not a rifle."

Members of the Vermont State Police Field Force, Arson Investigation Unit and Bureau of Criminal Investigation were called in and emergency personnel members located two unidentified bodies in the burnt wreckage. The bodies were transported to the Office of the Chief Medical Examiner for post-mortem examination and identification. On Saturday morning, the Office of the Chief Medical Examiner told detectives that both victims had been shot. This was not immediately apparent to investigators on Friday due to the condition of both victims from the fire.

During the investigation, detectives learned Orwat and his wife, Tami Orwat, 38, of Springfield, Mass., were "associates" of Sanderson and Lovely and had recently spent time at the cabin. The same day of the fire, Justin Orwat was arrested in Springfield, Mass., on outstanding warrants for larceny and shoplifting.

Before they left the Bellows Falls home at about 5 a.m. on Oct. 27, "Lovely was boisterous concerning his knowledge that someone had been stealing from him," noted the affidavit. Tami Orwat told detectives she believes Lovely was blaming her husband. "Tami Orwat described a tense scene in the vehicle concerning this topic and said that it continued when they reached their home," stated the affidavit.

Orwat noted that her husband attempted to speak to Lovely about the alleged thievery, but Lovely refused to discuss it. Instead, noted the affidavit, while at the cabin, Lovely gave Justin Orwat three bundles of heroin for his wife. A short while later, Justin Orwat told his wife to stay in the bedroom while he attempted "to clear the air with Lovely," Tami Orwat told detectives. Instead, Tami Orwat heard a loud argument followed by gunshots, punctuated with more arguing.

Eventually, Tami Orwat jumped out the window of her bedroom and fled to her vehicle, where she was joined by her husband. Justin Orwat "never told her definitively that he shot and killed Amanda Sanderson and Steven Lovely," stated the affidavit. "He did, however, say that the gun would likely be burned in the fire ... [telling her] ... he used a cigarette lit by a butane lighter to start it."

She also told detectives that when her husband got in the car he was crying "and told her if he had to go away for a long time that she had to promise not to leave him and to bring their daughter to him for visits," noted the affidavit. "She suspected he was crying because he felt guilty about what he had just done."

Orwat also allegedly told his wife that Lovely "was planning to kill them in the very near future." Tami Orwat told detectives while she thinks her husband truly believed what he had said, "she believed that the bath salts he used earlier in the night made Justin paranoid and that ... Justin's use of Klonopin made him violent. She argued that absent his and Steven's use of drugs that night, this entire incident would not have happened."

During the fire investigation, the Vermont State Police Arson Investigation Unit "observed indicators that a liquid accelerant had been used" in at least nine locations to start the fire. It has not yet been determined what was the type of accelerant was used, but a detective noted an odor "consistent with gasoline." Detectives in Massachusetts located Orwat's vehicle, noticing a five-gallon can of gasoline in the vehicle in plain view.

According to court documents, Orwat has a lengthy criminal history, including a manslaughter charge from 1995 when, as an identified member of the Neta gang in Springfield, Mass., he had knowledge of the shooting death by one of his fellow gang members of a suspected member of a rival gang. It is unclear at this time what was the resolution of that charge.

On Oct. 5 of this year, the Bellows Falls Police Department conducted a motor vehicle stop of a vehicle being driven by Lovely. In the vehicle were Sanderson and the Orwats. After a search warrant was issued, officers discovered $47,000 in case in the vehicle, as well as a white powder, trace amounts of marijuana and glassine bags. In 2015, after a traffic stop in Chicopee, Mass., Lovely was cited with possession with intent to distribute heroin, Oxycodone and Suboxone and possession of cocaine. Sanderson had also been in trouble with the law in the past, but for minor offenses such as possession of marijuana and driving with a suspended license.

Once Justin Orwat is extradited from Massachusetts, he will be arraigned in Windham Superior Court, Criminal Division, in Brattleboro.