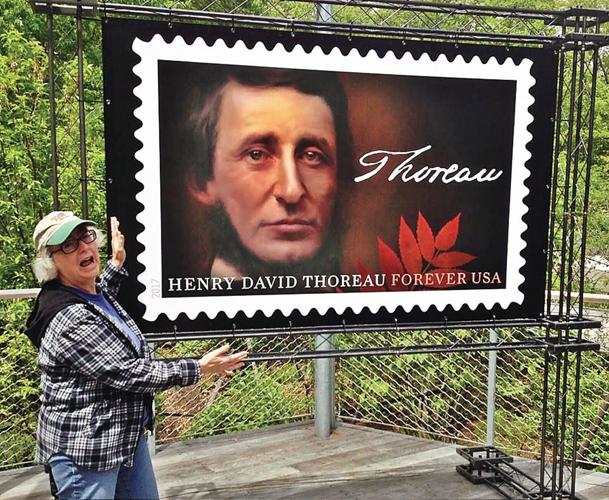 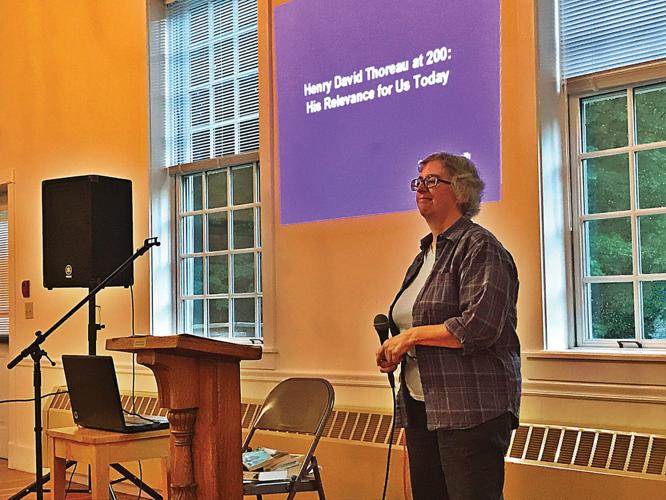 EAST DOVER — Henry David Thoreau once wrote that he had three chairs in his house.

"One for solitude, two for friendship, three for society," the philosopher and naturalist wrote.

Almost all the seats in Dover Town Hall were filled on Aug. 3 for the Dover Free Library's annual Dessert Social, where those three things as they relate to Thoreau were discussed by Corinne H. Smith. Local inns and businesses donated desserts to the event, which saw 85 attendees and raised almost $900 for the library.

"With torrential downpour, we're so glad you still came," she told attendees.

Smith, the guest speaker, is an author who recently had "Westward I Go Free" published. The book follows the footsteps of Thoreau's last trip. This year marks Thoreau's 200th birthday.

Smith admitted she had never been to Mount Snow, or visited the town where the ski resort is located.

The audience was asked what they knew about Thoreau.

"He went into town daily" when he was living at Walden Pond in Concord, Mass., said John Flores, library director.

Thoreau "called himself a natural philosopher and at the time, that was the term," Smith told the crowd. "There was no term 'scientist' at the time. We think that's a term that's always been around but there were no true scientists around."

Thoreau stayed at Walden Pond for two years to become a creative writer, according to Smith.

Asked what his family business was, attendees said, "Pencil making."

Thoreau's mother was born in Keene, N.H. Thoreau had visited the nearby time at one point and wrote about Main Street being very wide: "You can see a chicken crossing it from a mile off."

"And you still can," said Smith.

Thoreau would keep botanical samples in his hat for safekeeping. Smith said heat from his head would keep the collected items moist.

"I think that's a good idea," she added. "Because you want your hands free."

Transcendentalism, Smith said, is about finding spirituality in nature. Thoreau was a leader in that movement.

Smith's interest in Thoreau began in 10th grade. She had read "Civil Disobedience" and said the essay changed her life.

"Because at that time," she said, "when you're thinking about your role in society, here was this person saying, 'You don't have to be like everyone else. You don't necessarily have to follow everybody's rules.'"

Her interest only grew in college, where she worked her way through Thoreau writings in a 20-volume set. She decided she wanted to write a book and novel about him.

Employed as a high school librarian in Illinois, Chi., in 1997, Smith was shown a 1981 National Geographic article called "In the Tracks of Thoreau," which mapped out all of his travels.

When the Civil War started in 1861, Thoreau wanted to take a trip that might help cure his consumption. Men at that time were told to travel to an area with a different climate. Thoreau went from Massachusetts to Illinois, taking trains and steam boats on the Mississippi River. This fascinated Smith.

Smith spoke about Thoreau's correspondence with Brattleboro botanist Charles Frost. To visit Brattleboro and the Connecticut River, Thoreau had taken a train to Fitchburg, Mass., in 1856.

"He either read the schedule wrong or didn't see it at all and just assumed there would be another train," Smith said. "It turned out not to be that way."

Thoreau learned it would take three hours for the next train to come and decided to walk along the tracks. He kept inventories of flowers he saw along the way, according to Smith.

Smith told attendees, "I think you can find your own Walden no matter what habitat you live in; you can love it, learn all about it."

She said she has not found her Walden Pond yet.