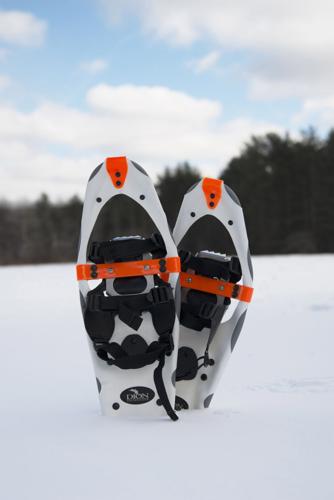 A pair of Dion Snowshoes, which are handcrafted by a small team in Pownal. 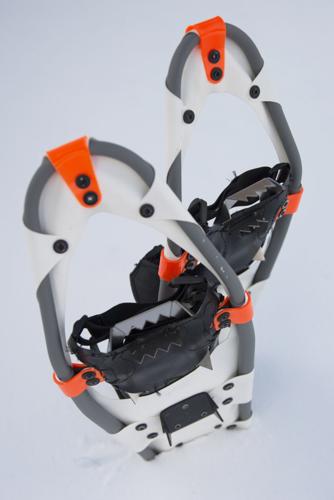 Dion Snowshoes, showing the cleats on the underside, is designed by founder, Bob Dion, and handcrafted by a small team in Pownal. 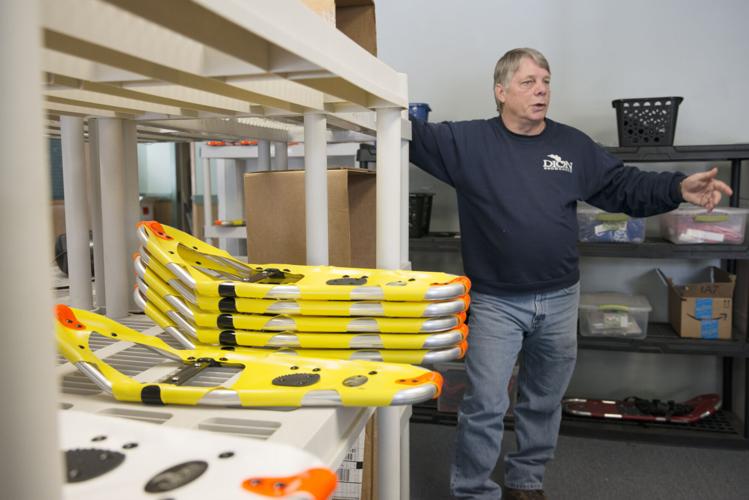 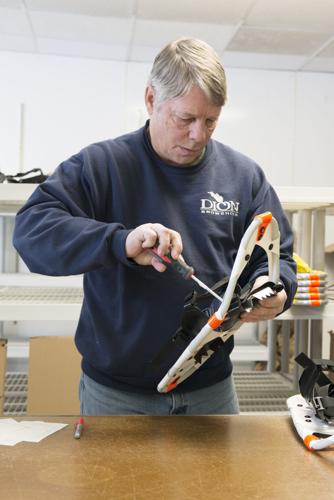 Dion finishes the assembly of a custom-order snowshoe. 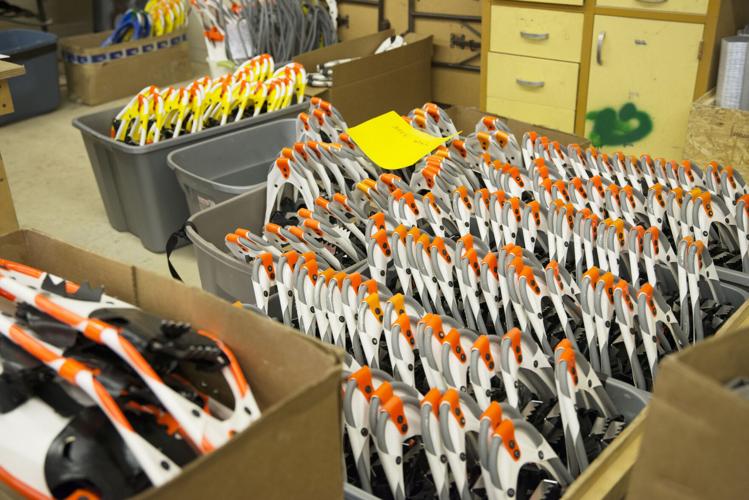 Snowshoes at the production site of Dion Snowshoes in Pownal. 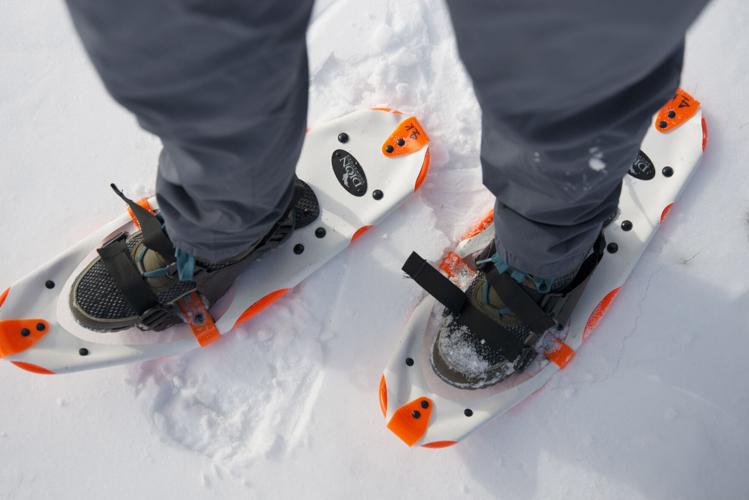 Dion Snowshoe straps snug down on boots and running sneakers. 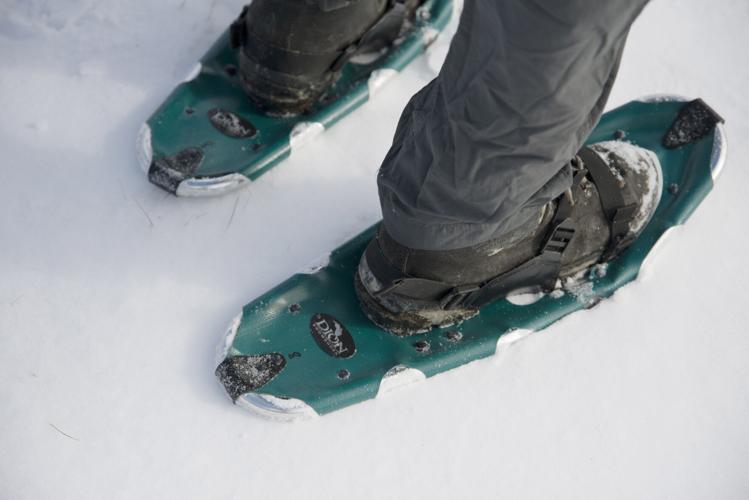 A pair of Dion Snowshoes. 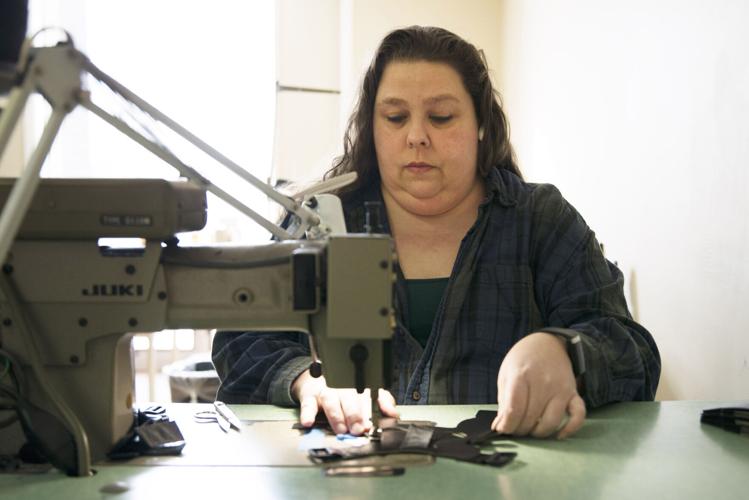 Tonya Van Buren sews the bindings for each pair of snowshoes. 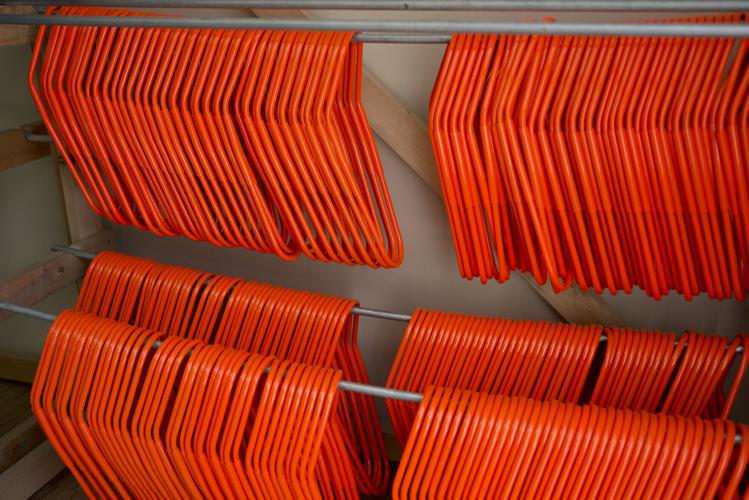 Aluminum frames, which are hand cut on site, at Dion Snowshoes.

A pair of Dion Snowshoes, which are handcrafted by a small team in Pownal.

Dion Snowshoes, showing the cleats on the underside, is designed by founder, Bob Dion, and handcrafted by a small team in Pownal.

Dion finishes the assembly of a custom-order snowshoe.

Snowshoes at the production site of Dion Snowshoes in Pownal.

Dion Snowshoe straps snug down on boots and running sneakers.

A pair of Dion Snowshoes.

Tonya Van Buren sews the bindings for each pair of snowshoes.

Aluminum frames, which are hand cut on site, at Dion Snowshoes.

POWNAL — Right up there with the scarcity of the Playstation V and at-home gym equipment, snowshoes are an outdoor-rec item that’s been harder to come by during the pandemic.

For those in the know in Southern Vermont or in the snowshoe-racing community, seekers of snowshoes need not go farther than Pownal, where Dion Snowshoes has been located since fall.

The name Dion is synonymous with grit, and its namesake, Readsboro’s Bob Dion, is somewhat inseparable from the snowshoe racing movement in the Northeast. He’s proud to say his company’s sponsorship flag has flown above the U.S. National Snowshoe Championships for 13 years.

The company founder recently met with Vermont News & Media to give an insider’s look at the streamlined and rugged snowshoes that bear his name.

One discernible difference between Dion Snowshoes and other brands is that they’re smaller.

“You don’t need a big snowshoe, you know. If you’re in Tahoe, 15 feet of fresh snow, maybe,” Dion said. Case in point: The company logo features a snowshoe hare, which has small feet but still stays atop the snow without sinking.

First based out of his property in Readsboro, and then North Bennington, Dion and his snowshoes are now headquartered on Route 7. The operation combines production, sales, retail, marketing and fulfillment, all under one roof.

“We’re making them one at a time,” Dion said.

At first, the business was solely Dion and his wife, Denise, competitive runners and snowshoers; today, they’re the former owners of the snowshoe company. When the retirement bug took hold, he and Denise sold to current CEO Joanne Petrozzi about three years ago, with Bob Dion still handling company operations (retirement, turns out, is still a handful of years off).

Petrozzi’s NeviTREK, an Adirondack brand snowshoe, bought Dion with his name and quality control intact. Both product lines are sold onsite, online and in stores.

“The good part was that we’ve got machines that she doesn’t have, and she has machines that we don’t have,” Dion said of the improved production capabilities.

Like many snowshoe racers and runners, Dion and his wife came to it from trail and road running, looking to extend their season into the cold weather months.

What started as a passing interest soon became a passion, taking over his winters and his professional life. Dion began to draw out the designs for snowshoes and their bindings in 1999. “By late 2001, we started selling.”

The couple started out by putting everything together and marketing the products all by themselves.

Racers would order snowshoes, and Dion would piece them together and bring them to their next race.

Soon, a handful of races a year became a couple dozen, with competitive snowshoe racers coming from near and far to lay it on the snowy line. The Dion name was catching on, the former owner recalled.

“People from New Hampshire, Maine would come to the race, go home and then start a race, then they start a series. It just got to where, recently, we’ve been up to like over 100 races within driving distance,” Dion said.

Dion said he witnessed races in which about three-quarters of participants were wearing his shoes. That was a lot of pressure to see his products perform to expectations, especially since Dion was competing alongside athletes wearing his snowshoes.

“I’m in the race. If there was a problem, I stopped and took off my shoes. I traded with somebody,” recalled Dion, whose racing days have been waylaid by chronic Lyme disease.

After a few years, temporary seasonal employees began to help out, and now the business has a steady crew of full-time staffers.

Raw and basic snowshoe components are pieced together right at the facility, made mostly from American-sourced parts. The aluminum framing for the snowshoes is delivered in blanks, and Dion and his team bend them to their unique shape in an outbuilding at headquarters.

Supply chain problems haven’t plagued Dion in the same way it has other businesses, through tactical ordering and because his parts are shipped stateside.

Snowshoeing, like many outdoor activities, gained immense popularity during the pandemic. At Dion, sales have tripled since the pandemic began.

“The biggest problem we have is supply and to make them fast enough,” Dion said.

Before the pandemic, business grew from word of mouth at snowshoe race happenings, and even staying solvent was a question mark that loomed too often, Dion said.

These days, the process of building a better snowshoe never ends for Dion the man; it dovetails with the warranty upon which Dion the company prides itself.

“If you show up for a race, if the conditions are terrible, it doesn’t matter. You’re still gonna race,” Dion said of the kind of abuse racing snowshoes take. “So we’ve got to keep improving.”

Product repair, just like their creation, occurs right in the Pownal headquarters. When VNM visited in late January, Dion was fulfilling custom orders, deftly attaching bindings to a blank snowshoe deck in mere moments, his hands long familiar with the work.

“If somebody breaks something, like if they break the cleat, we can send them another one,” Dion said.

He said customers are always pleasant about repairs, appreciating the personal touch of the product’s creator.

In some cases, Dion handles the product engineering; in other cases, Dion hires out. This result is a modern snowshoe, with some models customizable pre-purchase or post-purchase.

Dion and NeviTREK sell in specialty stores, such as running, bike, hike and board shops in New England, the rest of the U.S. and Canada, too, where Dion now has a distributor.

Prices range from about $140 for a recreational NeviTREK shoe to a $290 racing shoe by Dion. See their latest models at dionnevitrek.com.

“I tell people that this is cheaper than Walmart snowshoes, because you buy a $90 snowshoe, and a year later you’re spending another $90” to replace them, Dion said.

Because of its binding design, the rear of Dion Snowshoes springs up a little when raising the foot, so clearing obstacles and backtracking is infinitely easier; with a binding that pivots freely, logs and taking a few steps backward can result in trips and falls.

For racers, that’s not an option, said Dion, whose office sports a box loaded with his old race numbers, medals and related finishing honors.

He created a snowshoe for people like him and his wife, for whom performance matters.

“There’s a brook crossing, and step on a log, step on a rock and keep going,” Dion said.