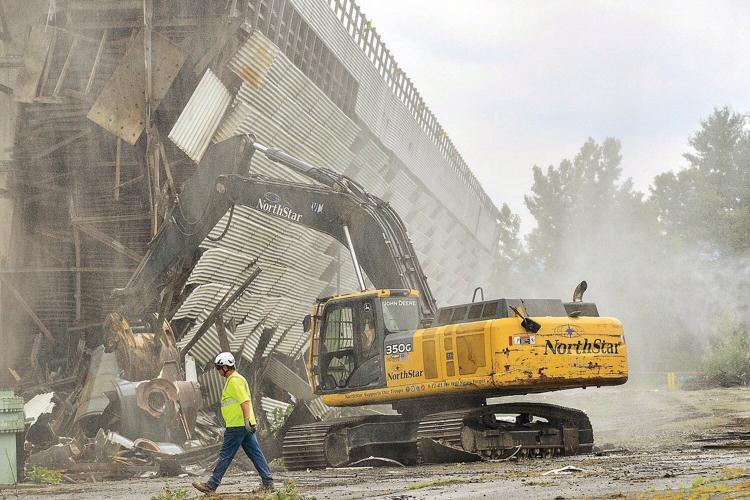 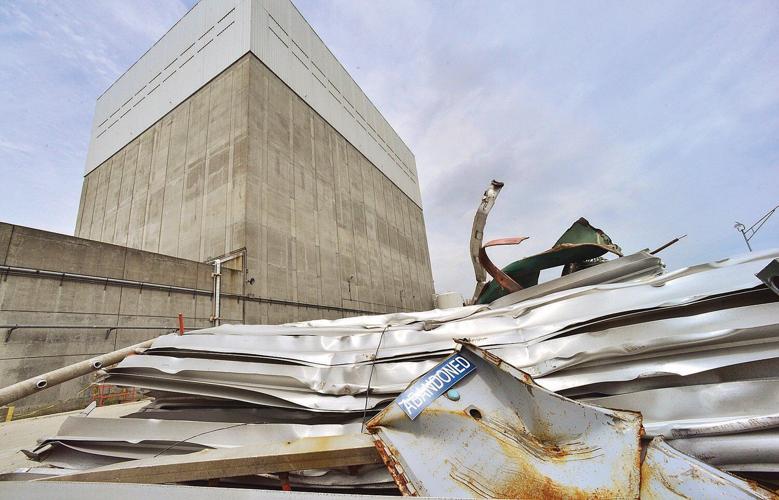 An abandoned sign lays on top of a pile of scrap aluminum outside of the main reactor building of Vermont Yankee Nuclear Power Plant, in Vernon, Vt., on Thursday, July 11, 2019. ?

An abandoned sign lays on top of a pile of scrap aluminum outside of the main reactor building of Vermont Yankee Nuclear Power Plant, in Vernon, Vt., on Thursday, July 11, 2019. ?

The issue is a perennial one: Will there be enough money to tear down, clean up and decontaminate the Vermont Yankee nuclear power plant site in Vernon?

And if the money runs out? What will happen?

Now, $100 million and a year into the demolition and decommissioning of the 1972-era nuclear power plant, State, the president and CEO of NorthStar Holding Co., the New York City demolition firm that purchased Vermont Yankee from Entergy Nuclear earlier this year for $1,000 in cash and the reactor's $500 million decommissioning trust fund, says his firm and its high-tech partners are largely ahead of schedule, and without a question, will complete the Vermont Yankee project on schedule and on budget.

There are too many controls in place, State said. "It can't," he said of the funds running out, predicting the plant would be demolished, cleaned up and the site restored to the so-called "green field" by 2026, which is about 50 years sooner than Entergy's predictions. He think actual demolition will be completed by 2024.

"There is no settled answer as to what happens if the decommissioning funding proves inadequate. This is why significant measures were taken by state and federal regulators in reviewing and approving the sale to NorthStar to guard against any decommissioning funding inadequacy," Tierney wrote in a letter addressed to Rep. Laura Sibilia, I-Dover, a member of the House Natural Resources and Energy Committee. She is its representative on the Nuclear Decommissioning Citizen Advisory Panel. The letter was also sent to the complete panel. Chairman Josh Unruh of Vernon, who has been skeptical of the panel, declined to comment about the letter.

State, whose industrial demolition company hopes Vermont Yankee will become a demonstration project for other, bigger, more lucrative nuclear demolition projects in coming years, says the past 11 months has been largely on target and as expected: the cooling towers have been demolished and hauled away, and work on the highly radioactive reactor's internal components is underway by Orano USA (formerly Areva), NorthStar's French business partner in the project.

NorthStar took ownership of the plant and its 134 acres on Jan. 11 but was confident enough that it would gain both NRC and state approval that it started work at Yankee months in advance.

State said the project is actually ahead of schedule in many areas, with the exception of the underwater work being conducted by Orano USA, since it had a late start.

But worries persist that the plant's decommissioning trust fund will be rich enough to pay for everything.

Tierney, the commissioner of the Department of Public Service, whose department has overseen operations at Yankee and helped negotiate the settlement, said what NorthStar is attempting to do has never been done before: a private, non-nuclear company is decommissioning a nuclear power plant on a strict budget — with no access to additional ratepayer funds.

And, she said, she and the department aren't convinced that the decommissioning is really ahead of schedule.

The state has hired an out-of-state consultant to evaluate the progress and spending by NorthStar, and some preliminary evaluations show that NorthStar is spending money faster than it should be, a lawyer for the Department of Public Service told the Nuclear Decommissioning Citizen Advisory Panel earlier this month. The consultant is scheduled to address the panel in the coming months..

Sibilia quizzed NorthStar officials and Tierney earlier this month about the project's finances, whether there really is adequate funding in place, if there is any money left over from the decommissioning trust fund, where would it go, and whether costs and spending were constantly updated.

Sibilia said she had written Tierney in October asking for some clear-cut answers to her financial questions. Sibilia, while the Vermont House representative on the panel, is no stranger to economic development in Brattleboro, as she is one of the top executives at the Brattleboro Development Credit Corp. But she stressed her nuclear role is strictly that of a state representative.

"It's a new model," said Sibilia. The ramifications go beyond Windham County and Vermont, she said, since the NorthStar model of a private firm buying a former reactor and conducting decommissioning is being watched in nuclear communities all over the country. NorthStar, she said, "is an innovator in the decommissioning market place."

Nontheless, "We can't get to the end of the money and say, 'Oh crap!' What happened? All my questions have not been answered," she said, noting that the Vermont Legislature's role is that of oversight.

In addition to NorthStar, Holtec, a New Jersey based manufacturer of nuclear fuel storage casks, is also getting into the decommissioning business, and recently entered into agreements with Entergy to purchase both its Pilgrim and Indian Point reactors.

Tierney and other state officials were able to negotiate additional funds and financial guarantees from both NorthStar Holding Services and Entergy, before endorsing the sale.

NorthStar agreed to put up between $125-140 million in guarantees, and put $55 million into a special escrow account, as well as take out a $30 million insurance policy against finding previously unknown radioactive contamination on the site.

Orano also contributed a $25 million guarantee, while Entergy contributed $30 million toward the site restoration fund, as well as putting $40 million it had received from the federal Department of Energy toward management of the plant's high-level radioactive fuel, into another escrow account.

Ray Shadis, a longtime anti-nuclear activist and advisor to the New England Coalition on Nuclear Pollution, had worked with NorthStar's State and other executives for months to come up with a better citizen advisory group, only to have it fall apart this fall.

Shadis, who lives in Maine close to the former Maine Yankee nuclear power plant, said the agreement with NorthStar fell apart this fall, and he said he's frustrated and has stepped away from the Vermont Yankee discussion.

State said he and Shadis and the NEC were working on a "more transparent" advisory group that would work with area citizens about their concerns. Citizen participation at the NDCAP panel meetings is all but non-existent, which Shadis said is an indication of the format of the panel.

"The state has failed to establish a means for real citizen input," said Shadis, comparing the Maine Yankee to Vermont Yankee decommissioning process, with Vermont coming up very short.

"Community input is pretty much meaningless," he said.

He said at other nuclear plants undergoing decommissioning, the companies have sponsored the citizen panels, and provided education and experts.

For instance, he said, the panel needs to be educated on the radiological clean up standards called for at Vermont Yankee.

Tierney said the Agency of Natural Resources now is the lead state agency dealing with the Yankee decommissioning, since the plant was shut down and nuclear oversight is the sole purview of the Nuclear Regulatory Commission.

Chuck Schwer of the Agency of Natural Resources said so far, so good.

"We feel pretty good that it's going quite well," said Schwer, the section chief for the Vermont Department of Environmental Conservation's waste management and prevention division.

He said that while Entergy had refused the state's request to do additional groundwater sampling and testing, NorthStar has readily agreed.

"NorthStar took over and took three rounds of groundwater samples," he said.

He said the petroleum-based contamination found so far was not unexpected, but he said there are big buildings that could still be masking contamination. The state won't know until those buildings — such as the turbine and reactor building — come down in about two years.

"I wouldn't call it a clean bill of health," he said. "There are areas we can't get to yet."

He said NorthStar would be submitting a revised site investigation report in mid-January, updating the state on what it has found so far.

"I think that NorthStar is proving to be a good partner," said Tierney. "This is not the decommissioning that folks envisioned way back.

"But there's no getting away from the fact there is an element of the unknown," said Tierney. "The unknown is the ultimate cost and I do hold out a healthy skepticism."

"The Department likely would take the legal position that NorthStar, as Entergy's successor-in-interest, must bear the burden of any such financial shortfall," Tierney wrote to Sibilia.

State said while its been five years since Vermont Yankee shut down, progress is being made to clean up the site and return it to use, as the community wants. He says he's tried to be responsive to Vernon's requests, and he believes that the vast majority of the Vernon site can be reused for economic purposes, despite the fact that no other cleaned-up nuclear plant sites have been redeveloped.

He said NorthStar originally planned on demolishing the old Entergy office building, but agreed to leave it at Vernon's request.

Other structures will be left if they are not contaminated, and if Vernon wants them.

He said NorthStar first got interested in Vermont Yankee because it was "the right kind of challenge" and it was a boiling water reactor, and a smaller plant. "We were looking at two or three plants," he said. "We are involved in other processes."

He said NorthStar worked on much smaller research reactors, but never a commercial reactor before Vermont Yankee. Since then, it has entered into a contract to decommission the Crystal River nuclear plant in southern Florida, and bid on other reactors, which went to Holtec International.

The past year of active decommissioning has not contained any real surprises, he said.

"We are well within budget," he said.