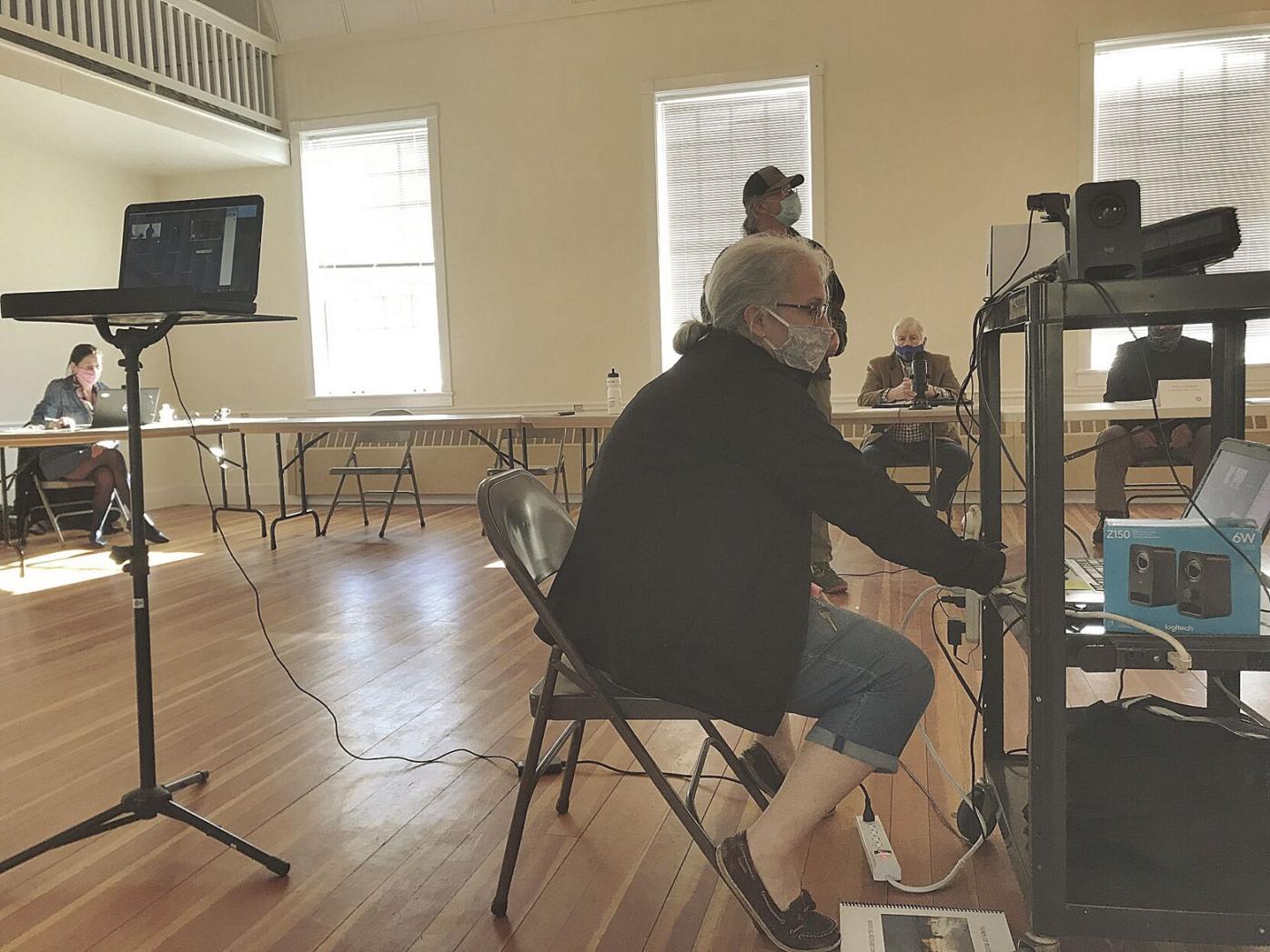 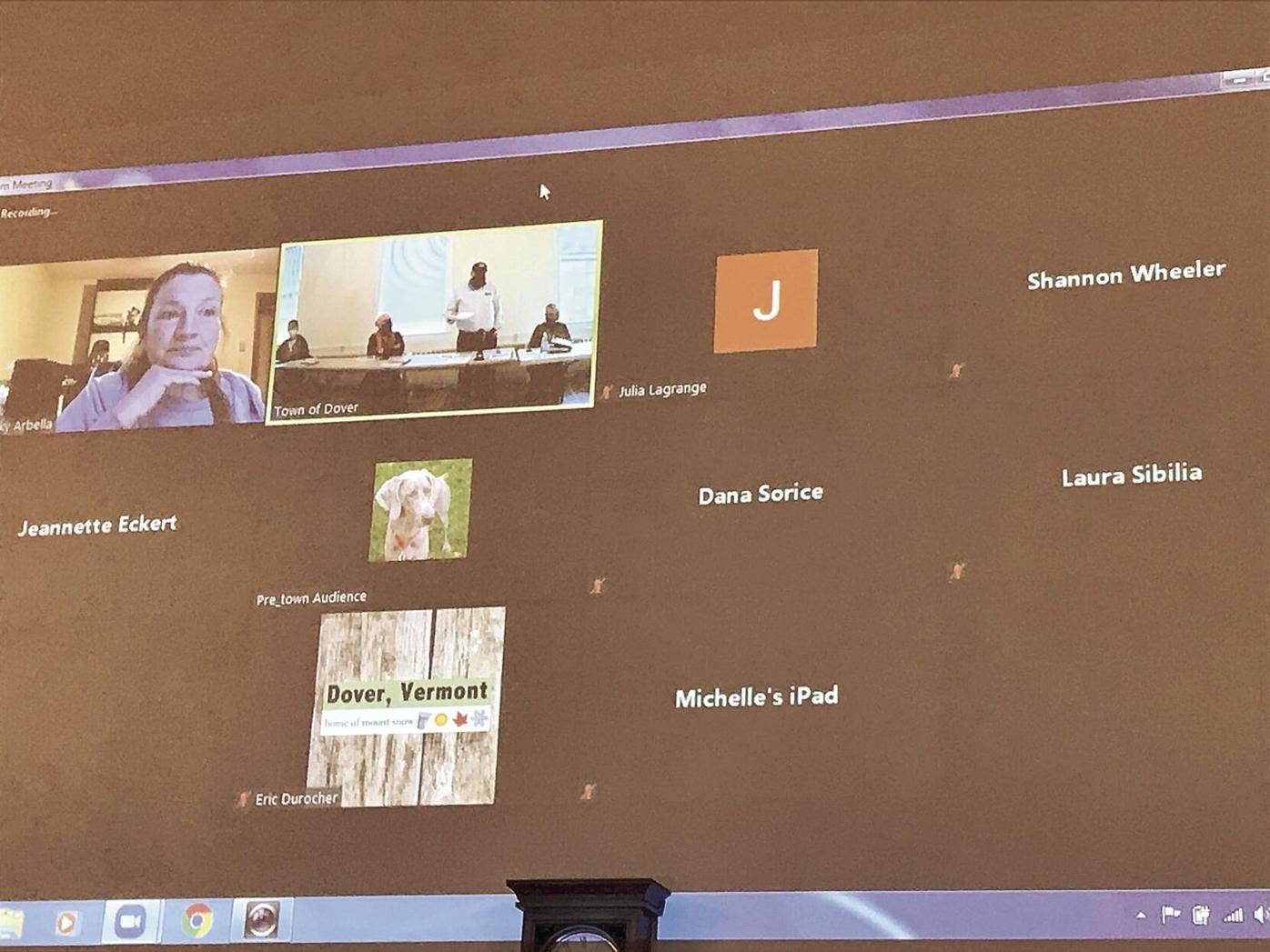 Zoom participants could be seen projected on a wall inside Town Hall at an informational meeting Tuesday.

Zoom participants could be seen projected on a wall inside Town Hall at an informational meeting Tuesday.

DOVER — Delayed due to the COVID-19 pandemic, annual Town Meeting will be held in-person on Tuesday at the Carinthia base lodge at Mount Snow, complete with discussion on funding measures and a contested Select Board race.

Town Clerk Andy McLean “has done a wonderful job making sure we’re going to have a good, safe, COVID-free Town Meeting,” Town Moderator Rich Werner said at Monday’s pre-Town Meeting informational meeting at Town Hall, where remote participation also was offered via Zoom. “A lot of towns gave up on the town meeting but Andy really felt strongly about having an in-person meeting ... so Andy, great job.”

Werner called the annual tradition, where voting on budgets and other items affecting tax bills is done from the floor, “one of the last true democracies.”

Incumbent Scott Salway is being challenged by Richard J. Sedlack for a three-year term on Tuesday. Salway was appointed to fill the position in September when Josh Cohen resigned a month earlier.

“I wasn’t going to skip out on tee-ball practice even if that meant showing up in my tee-ball attire,” Salway said, wearing a hoodie and t-shirt Monday at a candidates forum held by Rotary Club of the Deerfield Valley before the informational session. “I spend a lot of time out in the community, therefore I interact with a lot of people and I like to have my ear to the ground and hear what you have to say.”

Sedlack, who has been a resident in town for 14 years and travels around the country for his work as a teacher in the appliance industry, said he fell in love with Dover before moving to town “because it reminded me of ‘American Pie’ — the song, not the movie.” He said he grew up in a resort community in the Catskills in New York but left because businesses did not keep up with demands of the industry and fell apart.

“My biggest concern is the future of Dover,” he said, sharing concerns about how climate change will affect the ski industry and potentially recast what the town needs to offer to bring in revenue and employment opportunities.

Salway said he believes Mount Snow is preparing for climate change but he still wants the town to be ready for the future. He touted the town’s economic development department’s efforts to get feedback to keep local residents happy and attract new people.

With more trails coming and talk of creating other recreational offerings, Sedlack said he would like to look at parking and ensuring there’s enough infrastructure to support visitors. He also believes a dog park being proposed by a resident should be explored.

Prompted by noise and parking issues near his own home, Sedlack has been an outspoken critic of houses being run as a businesses for short-term rentals. He’s advocating for the practice to be banned in residential zones in town.

While Salway sympathized with issues his opponent has dealt with, he said some people have been able to make money through short-term rentals and support the purchase of a home.

At Town Meeting on Tuesday at the Carinthia base lodge, voting remotely will not be allowed but there could be presentations from lawmakers or groups who can’t make it. The Select Board has begun to meet at the town offices, with participation allowed in person and via Zoom.

Masking and distancing guidelines will be followed Tuesday. McLean said if it’s nice out, big garage doors at the lodge will be opened.

The proposed approximately $2,133,882 general fund budget for fiscal year 2022 reflects an 11 percent decrease from last year. Select Board Chairwoman Victoria Capitani said if four other articles related to municipal funding on the warning pass, the town would need to raise an additional $266,100 from last year, making the total just $2,028 higher than the current fiscal year.

“I think the most important thing is we asked our department heads to work hard to try and level fund or cut where they could without reducing services and everyone did a great job,” she said.

The paving budget is proposed to drop by $50,000 to help offset the price of upcoming capital equipment purchases. Last year, voters approved $300,000 for the equipment fund. This year, the article calls for raising $500,000.

The capital building improvement fund is proposed to get $80,000, the same as last year. Capitani said water contamination issues with properties at the Common will be addressed with money from the fund.