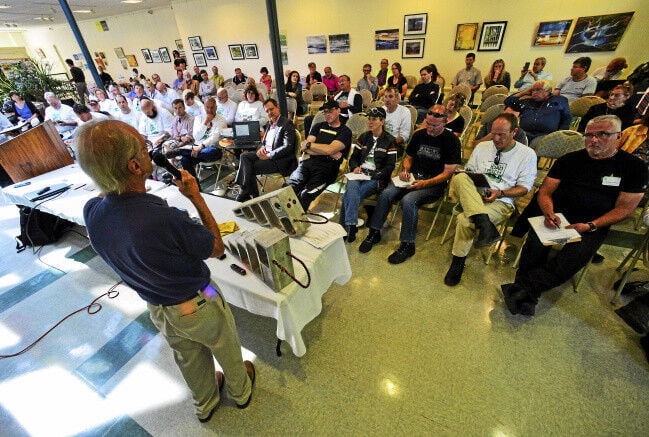 Frank Maltese pitches the GroundHog Step Chocks during the second annual FreshTracks Road Pitch at the River Garden in Brattleboro on Tuesday. 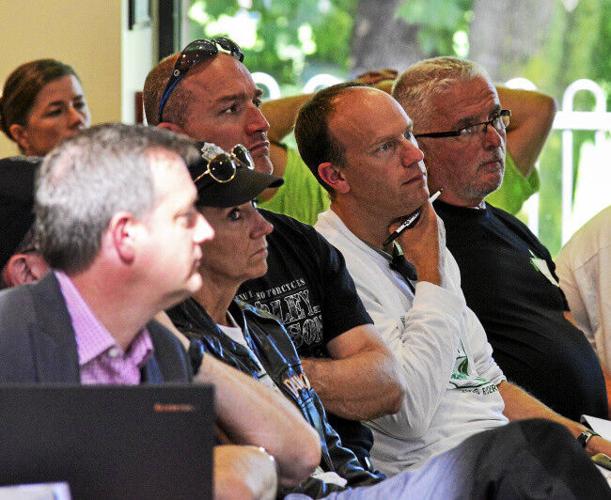 Investors riding on motorcycles visited the River Garden in Brattleboro for the second annual FreshTracks Road Pitch on Tuesday.

Frank Maltese pitches the GroundHog Step Chocks during the second annual FreshTracks Road Pitch at the River Garden in Brattleboro on Tuesday.

Investors riding on motorcycles visited the River Garden in Brattleboro for the second annual FreshTracks Road Pitch on Tuesday.

BRATTLEBORO >> A group of bikers made a pit stop at the The Robert H. Gibson River Garden Tuesday afternoon, not to peruse the Strolling of the Heifers merchandise, but rather to select one of six local aspiring entrepreneurs. And of the group, a film enthusiast with a vision to pilot an independent television network had the win.

This event is best known as the FreshTracks Road Pitch, a competition created by FreshTracks Capital in 2014, which sends business bikers on the road for a five-day road trip across Vermont in search of the "best and brightest entrepreneurs across the state," according to its website. The 30 biker participants ride for five days, making two stops per day throughout Vermont. All of the "pitchers" are selected by the local organizer, and in this case that was Orly Munzing, founder of Strolling of the Heifers. The event was co-sponsored by the Brattleboro Development Credit Corporation.

So on Tuesday, bikers sat back, drank coffee and enjoyed Vermont treats while listening to a brief pitch by seven different entrepreneurs.

"It struck me that there were a lot of people who had built and sold companies and were in a position to give back to emerging entrepreneurs ... and they also rode motorcycles," said FreshTracks Road Pitch Co-Founder Cairn Cross.

Some riders stick through the entire five day tour, while others come and go. Bikers/judges vote on their favorite "pitcher" based upon 10 different categories, such as target market and addressing the problem or need and solution. Cairn added that the judges are looking for someone who can summarize their business need in a short amount of time.

"If you are an experienced business person, you should be able to articulate in a seven minute pitch. It seems like there's a lot there, but someone who's really good at it, will boil it down," said Cross. "They'll tell you who they are, they'll tell you the problem, the solution and so on."

The judges/bikers selected ITVFest, an "indie" film festival that takes place in Dover, which "recognizes the best independently created TV pilots from around the world," according to its website.

ITVFest walked away with $500 and some locally sponsored prizes from the Vermont Teddy Bear Company and Merritt & Merritt. In addition, ITVFest it will have a chance to add to their winnings during a statewide "Pitch Off" set for Oct. 18 at Champlain College, among nine other "pitchers" selected. The winner will walk away with a $4,000 prize and mentoring from a group of business-savvy motorcyclists who could help with substantial funding.

During the pitch from ITVFest, Executive Director Philip Gilpin Jr. introduced the company and addressed the problem and solution, key aspects for earning a solid score.

"The problem is there are a lot of independent television shows out there and they are completely scattered all over the web," said Gilpin.

Gilpin went on to say that the problem for a viewer is that there is no YouTube algorithm to suggest a new TV series for an individual after they have completed a series that they sincerely enjoyed. He adds that there is not yet an algorithm for Netflix and Amazon for independent television specifically.

"So that is the solution," Gilpin said pointing to his presentation. "This is the independent television network, it will show up on your Apple TV box, your Roku box or any of your web connected devices and you will be able to have access to all over our professionally and publicly curated shows."

Some of these shows are selected by agents and managers of the network and the public aspect is based on audience choice award that is selected among the approximately 1,000 people who attend the festival each year, according to Gilpin.

Gilpin said he has already added a crowd sourcing option for the films online where people can choose to donate to certain shows that need more funds to keep the series alive.

He notes this is their 11th year of the festival and it is sponsored by HBO and partnered with the National Academy of Television Arts and Sciences (the Boston Chapter), CBS Interactive, Warner Brothers and several others.

ITVFest is ultimately looking for a $2.5 million investment to acquire content, marketing, build a platform and legal and office fees. He adds that revenue will also come in through advertising, subscription and branding.

"I believe that within two years of having this platform launched and getting these tens of millions of viewers together, we will get picked up and bought out by one of the majors," said.

The festival this year is at October 5 to 9, 2016 in Dover, VT. To learn more visit itvfest.com

To learn more about the Road Pitch, visit freshtrackscap.com