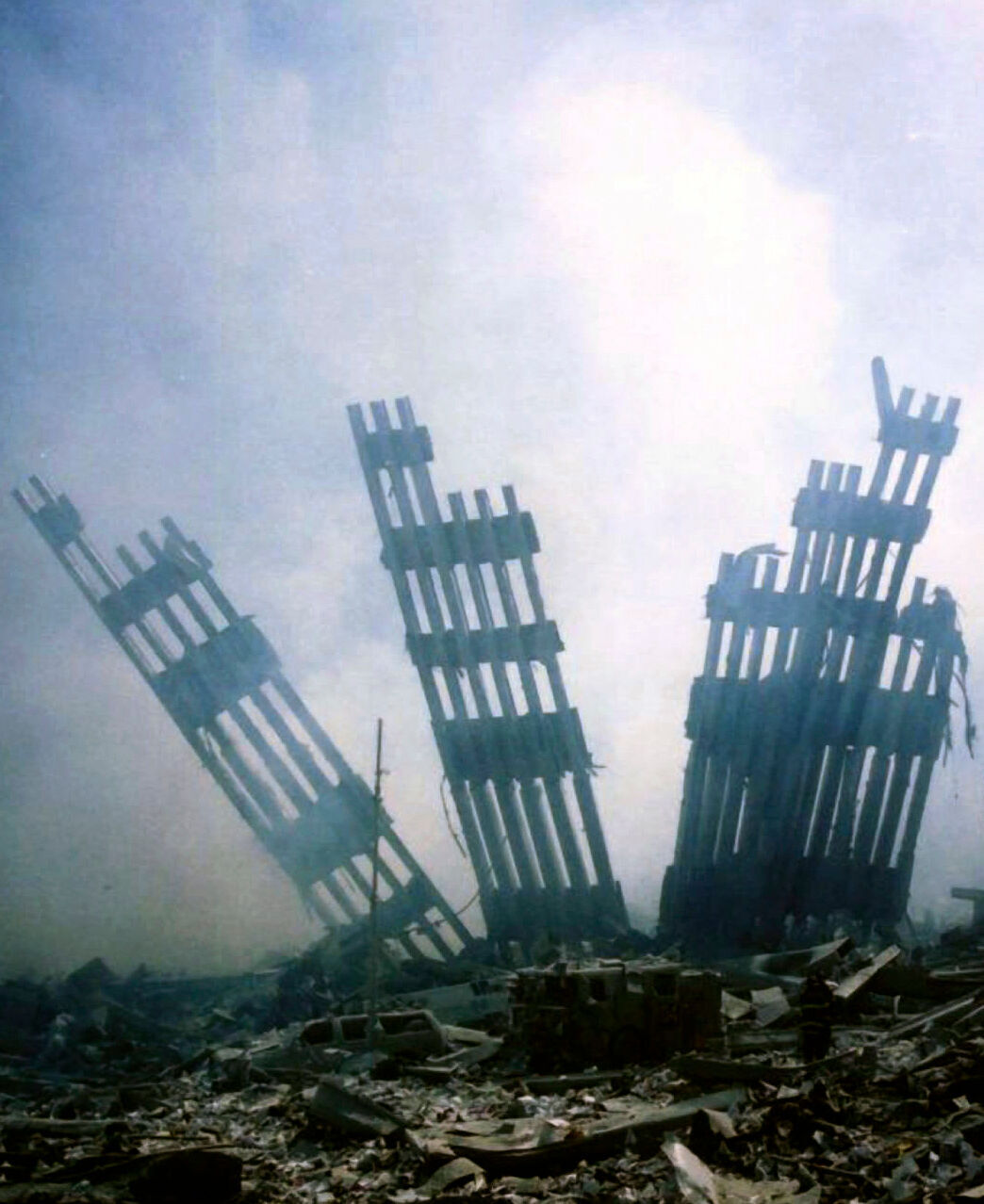 The remains of the World Trade Center stands amid the debris in New York on Sept. 11, 2001. 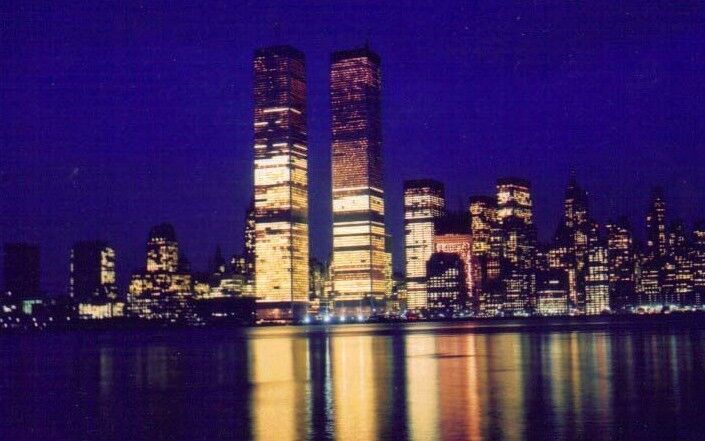 The Twin Towers, as seen from New Jersey. 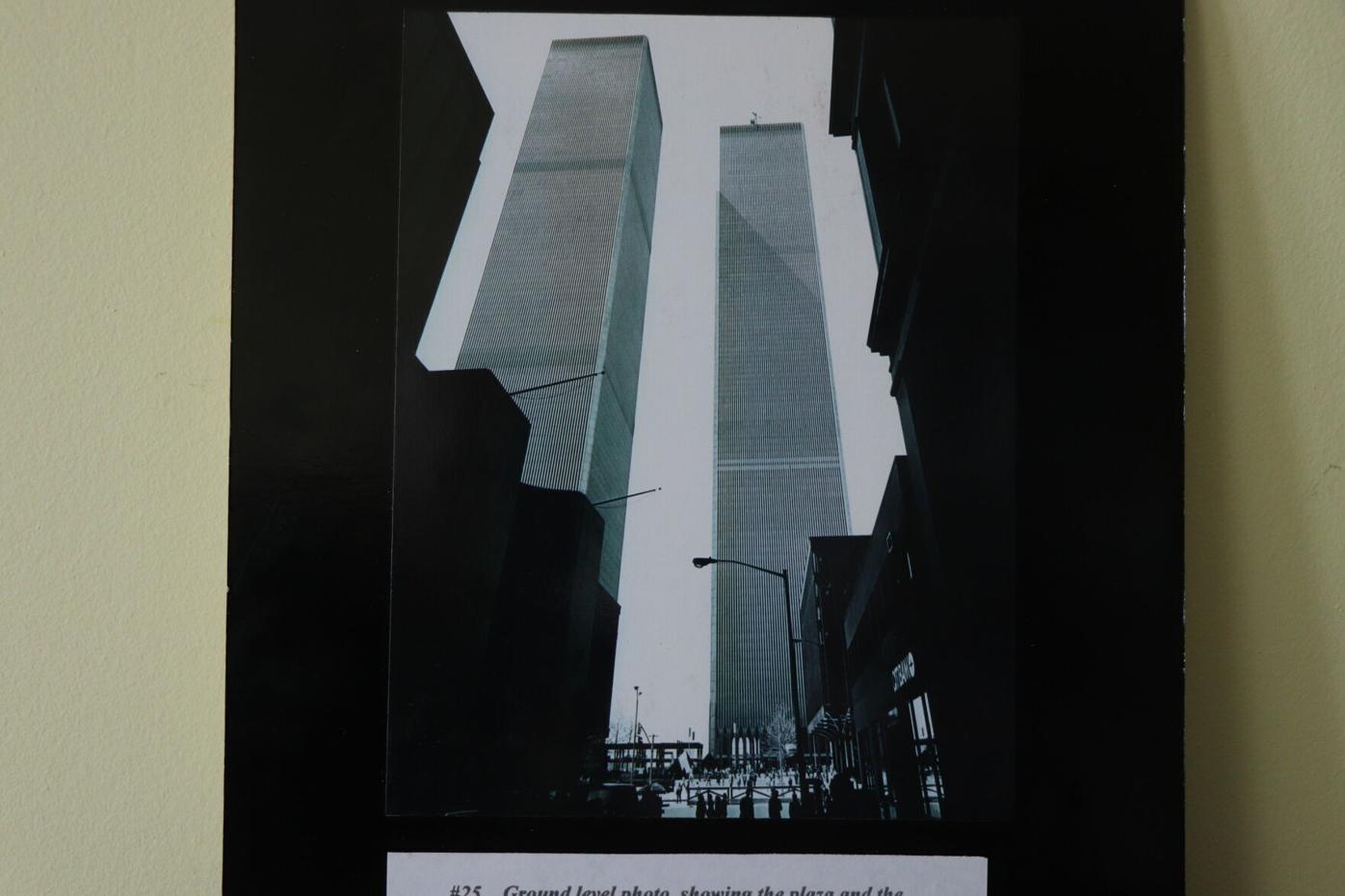 A shot of the Twin Towers by Sid Birns. 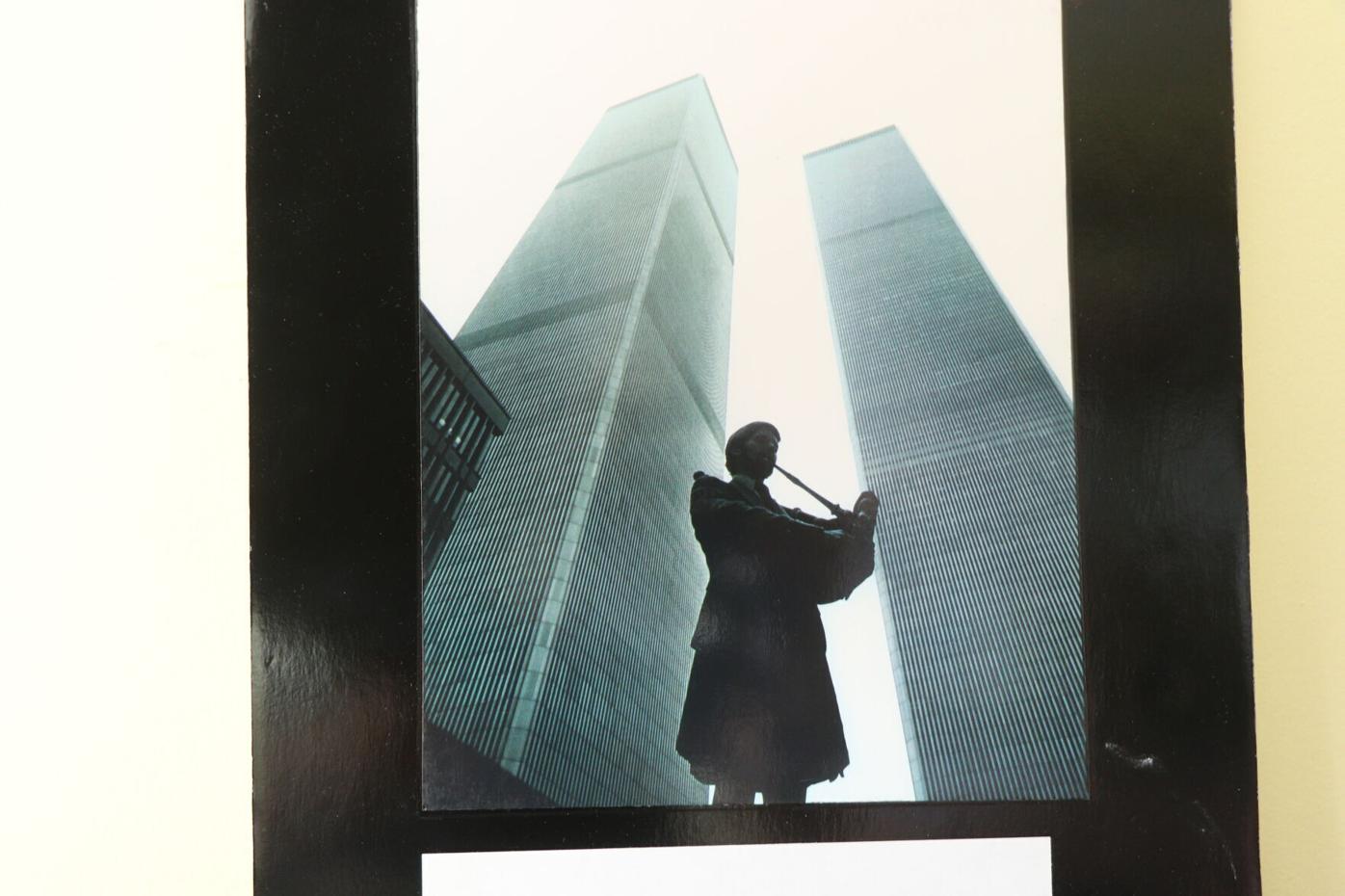 A photo of the Twin Towers.

The remains of the World Trade Center stands amid the debris in New York on Sept. 11, 2001.

The Twin Towers, as seen from New Jersey.

A shot of the Twin Towers by Sid Birns.

A photo of the Twin Towers.

Editor’s note: This story contains descriptions of extreme violence that might be upsetting for some readers.

EAST DORSET — For 20 years, Sharon Premoli has waited for justice. She hopes this is the week it finally comes.

Premoli, who worked in the financial industry, was on the 80th floor of the World Trade Center’s North Tower on that fateful day two decades ago.

Her life has never been the same, and she’s hopeful that the government will finally do what is right by releasing all the documents about the attack and who was responsible for it.

Premoli’s story is hard to hear but vitally important as part of the recognition of the events of 20 years ago.

Most people know of 9/11 from what they have seen on TV, read about in news articles or learned about from a documentary.

But Premoli lived it. The images in her head were put there 20 years ago at Ground Zero.

Her story is a combination of personal recollection and the things she was told by others who were there with her. She is still learning about the events of that morning, including details she learned of as recently as a month ago.

“There are things I didn’t know or don’t remember,” Premoli said.

What she does remember, she’ll never forget.

It started like any other morning, with Premoli sitting at her desk on the 80th floor, working for a company that dealt in trading and market data applications.

She said there was a sudden explosion and a jolt as the building tilted and swayed. Her desk slid across the floor, and she instantly knew there had been an explosion of some sort.

“It was pure terror,” she said. “The building lurched. I thought the building was falling over. I thought a bomb had gone off. The impact was extraordinary.”

What she couldn’t have known in that moment was that an airliner had just slammed into the building a dozen floors over her head and thousands of gallons of jet fuel were washing down the elevator shaft not far from where she sat.

The fireball that most people saw on television exploding out of the side of the building was right above her.

As she exited her office into the lobby on the 80th floor, the first of many serendipitous moments that would ultimately lead to her survival appeared in the form of a Port Authority officer who led her and colleagues to a corridor none of them even knew existed, which opened to a stairwell.

As they made their way down the corridor, Premoli said the ceiling above her head was on fire.

As they went down the stairs, people poured into the stairwell at every floor, as a mass of humanity made their way down flight after flight of stairs.

They made their way down to the 64th floor, where an officer told them to wait as he radioed for directions. But her supervisor said, “No, we’re heading out.” He led Premoli and 16 colleagues along with a man with a head injury, whom Premoli had been helping, down the stairs.

They descended to the ground level, but Premoli said when they reached the bottom lobby, it was gone. “The lobby was no longer there,” she said.

The jet fuel had washed down the elevator shafts and ignited at the bottom, she said.

What was there was death, destruction and sights that continue to haunt her.

At one point, a firefighter directing them instructed them not to look to their left. Without looking, Premoli could hear bodies of jumpers hitting the concrete.

“The carnage was extraordinary,” she said. “When they hit the pavement, the noise was incredible. It was a scene of extreme violence.”

They sought refuge inside another building. With others, she was standing at a plate glass window watching as Tower No. 2 came down. The debris came at them with such force it blew the windows in, lifted Premoli off her feet and knocked her into a store behind them.

“It came at us like a freight train, lifted me up and blew me into a Borders bookstore,” she said.

She was knocked unconscious and, after coming to, began to feel around in the darkness caused by debris and overwhelming dust. It had filled her mouth and throat, and she was choking, trying to breathe and had to physically remove it from her mouth.

“I was choking to death,” she said.

She made the horrifying discovery that when she had been blown into the store, she had ended up landing on another person.

“I was face down, trying to feel my way around, and I realized I was laying on a body,” Premoli said.

To this day, that was the single most horrifying moment of the entire experience.

Encrusted in that person’s blood, she made her way out of that building with the help of a New York City detective who found her with a headlamp; he used his oxygen mask to assist her.

“I don’t remember all of it, but he put his mask on me and told me to breath,” Premoli said. “He kept telling me to breath.”

Then two firefighters who were also trapped in the building by the collapse used their oxygen tanks to bust through a door to get out of the building and to the street.

She was taken across the street and given oxygen. She remembers a police officer who said his name was Roy or Ray. She’s not sure because she said the noise was overwhelming.

Premoli said she tried to get a ride, but cars whizzed by trying to escape and wouldn’t slow down or pick her up.

When the North Tower came down, a young man grabbed her and helped her for a bit, but she said he finally told her, “I have to run.” She said she told him, “Go ahead.” And he was gone.

Finally, a man took her up to his apartment where he and his wife took care of her and reached out to friends and family.

She suffered multiple injuries, but the worst was a traumatic brain injury. She said she suffered cognitive problems for about a decade and continues to suffer from post traumatic stress disorder.

But the fight to survive was only replaced by a fight for answers.

While most of her physical injuries have healed, Premoli continues to deal with the emotional injuries.

Premoli said she never returned to the corporate world, became a writer and eventually moved to Vermont.

She eagerly awaits a trial scheduled for next year in which she’s a plaintiff.

She’s lobbied Congress, presidents and more in her fight for answers.

She met with President Trump, who promised survivors to release documents they had sought, but then Attorney General William Barr shut that down.

A meeting with President Biden ended with promises to release documents by this week’s anniversary, and an executive order has Premoli expecting to see those documents by the end of the week.

“President Biden made a promise in keeping with his commitment to us,” she said. “It’s the first time they’ve kept their promise, openly and with a schedule. No president has done that.”

She’s written about the issue and has written a memoir that she expects to release after the trial is completed.

“Complicity, The United States v. The People of the United States” chronicles her life and her 19-year legal fight for justice, she said in a statement.

“It talks about what happened and the incredible transformation in my life,” Premoli said. “How we had to fight the defendants and then the government decided to defend the defendants.”

Premoli said a lot of Americans haven’t kept up and don’t know what the government has been up to.

“Americans believe they got the planners and they got Osama bin Laden and that’s the end of the story,” Premoli said. “But that’s really the beginning of the story. We’ve been fighting the American government.”

She said there were 3,000 murders and 10,000 attempted murders, and she said the government has been protecting the Saudi government that was behind the attack.

She said previous documents released were redacted to cover up the Saudis’ role in the attacks.

“Keep in mind, the Department of Justice stood up in court and said they were withholding evidence that implicates Saudi Arabia,” Premoli said. “They said that in court. Evidence!”

She said an FBI investigation that has been ongoing closed a couple of months ago, and she hopes when the results are released, it won’t be redacted to protect the Saudis.

“Will those documents be redacted?” she asked. “If these documents are redacted covering up Saudi Arabia’s role, it’s not helpful. We don’t even care if they want to cover up their incompetence. But if they cover the Saudis’ role, that’s another thing.”

She said if the government releases the full document, unredacted, it will restore some of her and other survivors’ lost confidence in their government.

“It will restore some trust,” she said. “Those of us who were injured or lost loved ones who have been on this journey so long, we’ve lost trust in government. It makes us question the morality of government.”

Premoli said Sen. Patrick Leahy of Vermont has been very helpful and was instrumental in getting the “Justice Against Sponsors of Terrorism Act” passed by Congress.

“He really helped and was very responsive to us,” she said.

Premoli, a Massachusetts native, moved to Vermont — “a very beautiful place” — in 2006. She said 9/11 changed her life completely.

“I came up here really to disappear,” she said. “I was in very bad shape. It’s taken a long time to feel at home here. I still have PTSD. I’ll probably have it for the rest of my life. ”

She said not a lot of people above the 78th floor survived that day.

“I’m lucky to be alive,” she said. “I deal with it every day. It’s really a miracle. I don’t think people understand the carnage that happened.”

She said that while much of the world prepares to mark the 20th anniversary of that day, she’s going to do her best to avoid it.

“This is a very difficult time of the year,” Premoli said. “This year is particularly hard. It’s a huge milestone. I live one day at a time.”

On Saturday, she said she and a friend will spend the day at the Massachusetts Museum of Contemporary Art in North Adams, Mass.

“I don’t want to see all the imagery on TV,” she said.

She was quick to explain that it’s not meant to be disrespectful.

Gone, but not forgotten

While doing aerial photography around Manhattan, we fly south along the Hudson river, toward…