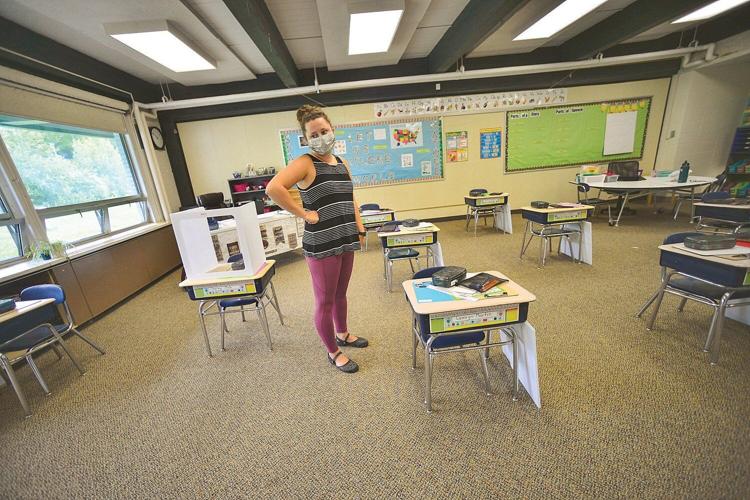 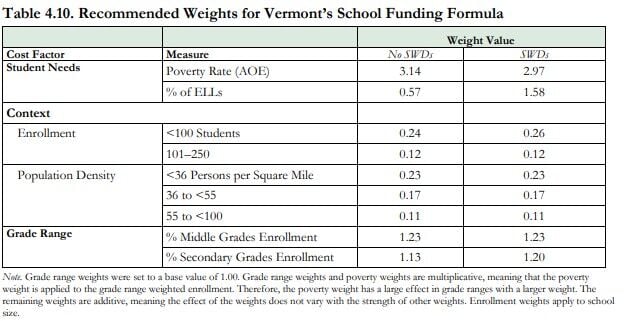 This table shows the weighting factors proposed for determining per-pupil expenditure in Vermont under a proposal before the Vermont House of Representatives. The figures in the far right column would be the new factors for rural students, English language learners and students from economically disadvantaged households.

This table shows the weighting factors proposed for determining per-pupil expenditure in Vermont under a proposal before the Vermont House of Representatives. The figures in the far right column would be the new factors for rural students, English language learners and students from economically disadvantaged households.

MONTPELIER — More than a year ago, a study commissioned by the Vermont Legislature concluded the state’s pupil weighting system — its means of equalizing educational opportunity for rural students, economically disadvantaged students and English language learners — needed to be overhauled.

The potential changes in education property tax bills are significant enough that a bill proposing new weighting factors, considered by the House Education Committee on Tuesday, includes safety valves phasing in the biggest change and phasing in increases for communities where taxes rise more than 20 percent.

The committee was taking up the bill, H. 54, for the first time this season. A “walkthrough” led by legislative counsel James DesMarais provided lawmakers with background on the issue, and a step-by-step explanation of the bill.

“This is obviously a significant conversation,” committee chairperson Rep. Kathryn Webb, D-Shelburne, said. “Whatever we do will end up over at Ways and Means at some point,” she added, noting the tax implications of the proposal.

In the current weights applied to students in determining per-pupil expenditure, the weights are 0.46 for pre-kindergarten students, 1.0 per elementary students, 1.13 for secondary students, 0.20 for English language learners, and 0.25 for students from economically disadvantaged households (as determined by free and reduced lunch eligibility). The number of students in category is multiplied by the relevant factors, and those figures are added to arrive at the average daily membership for the purposes of budgeting.

The new weights include categories for middle school and for low-density rural areas, and greatly increased factor for students in poverty — to a factor of 2.97 from the current factor of 0.25.

State Rep. Sarita Austin, D-Colchester, said the committee should think about the best way to move forward without creating tension between communities facing tax increases and those that will see decreases, as a result of how the new weights affect average daily membership.

“I don’t want conflict over children who need English Language Learning and children living in poverty. “I don’t want haves and have-nots,” she said.

A series of public hearings, contemplated in state Sen. Phil Baruth’s proposal, S. 13, are a good idea, she said. If people feel like they’ve been heard, “it might make the transition easier,” she said.

The weighting factors were designed in the wake of the landmark Brigham court decision to count economically disadvantaged students at levels greater than enrollment, based upon the principle that it takes more resources to provide an equitable education to students from disadvantaged backgrounds. The idea, DesMarais told the committee, was that the weighted student membership would also make it possible for districts to fund schools at a lower tax impact.

But the study, completed by University of Vermont researchers at the Legislature’s request in late 2019, found the weighting factors — most notably, a factor of 0.25 for students in poverty — didn’t reflect the real educational costs.

Furthermore, the existing weights have “weak ties, if any, with evidence describing differences in the costs for educating students with disparate needs or operating schools in different contexts,” the study determined.

In other committee business on Wednesday, the panel heard a proposal from Rep. Kathleen James, D-Manchester, for a three-year pilot program establishing community schools in Vermont.

The concept, as presented in H. 106, imagines schools as true community centers, offering integrated student and family support, significant family community engagement, after-school and summer programs, and increased community and family involvement. James presented a similar proposal last year, but it went to the back burner with many other bills when the COVID-19 pandemic hit.

The bill would allocate $1.5 million from the Education Fund for 10 pilot programs. Most of the money would be used to hire community coordinators who would run the programs.

“You can’t just say to a social studies teacher ‘Hey, spend a couple hours a week being our community schools coordinator,’” James said.

“We have schools in Vermont that are doing this in exciting ways,” James said, citing Bennington’s Molly Stark School among them. “I can’t wait to hear testimony from these folks in a way that brings this to life, in a way this [bill] language can’t,” she said.