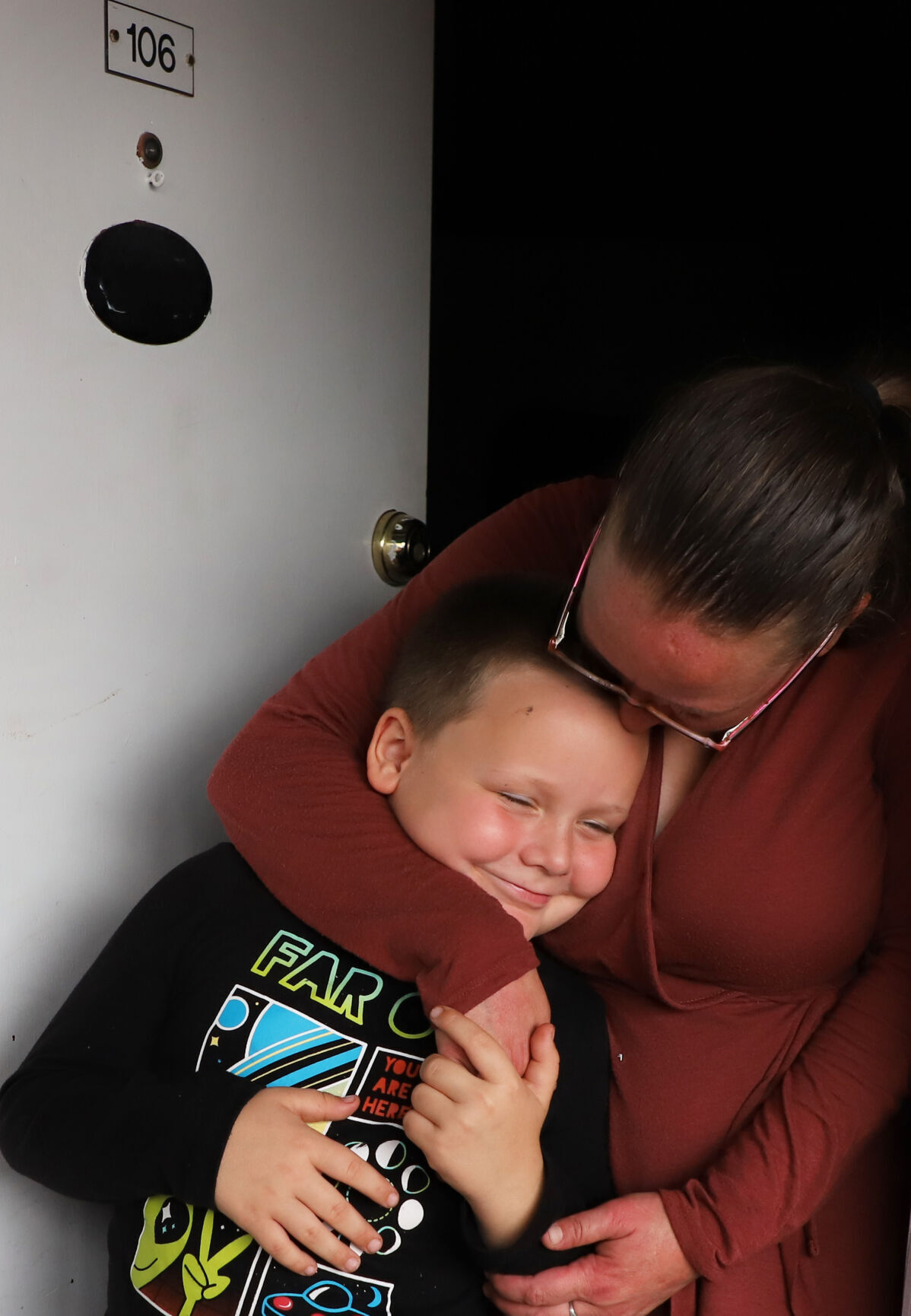 Tara Barber and 7-year-old son, Ethan, snuggle up while living at the Mid-Town Motel in Bennington. They've been living motel-to-motel for two years, under a state emergency aid program. 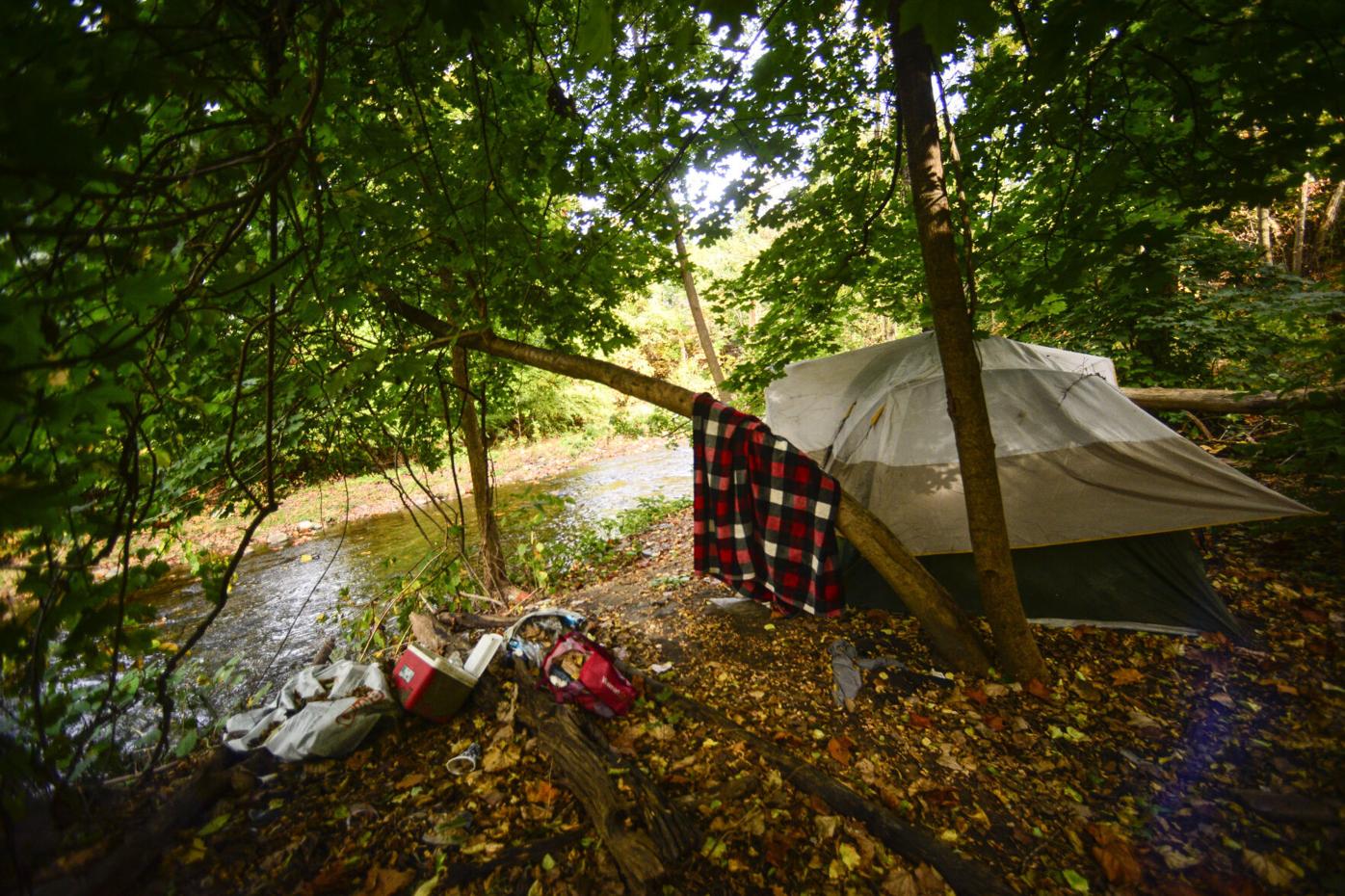 A homeless encampment in Brattleboro. 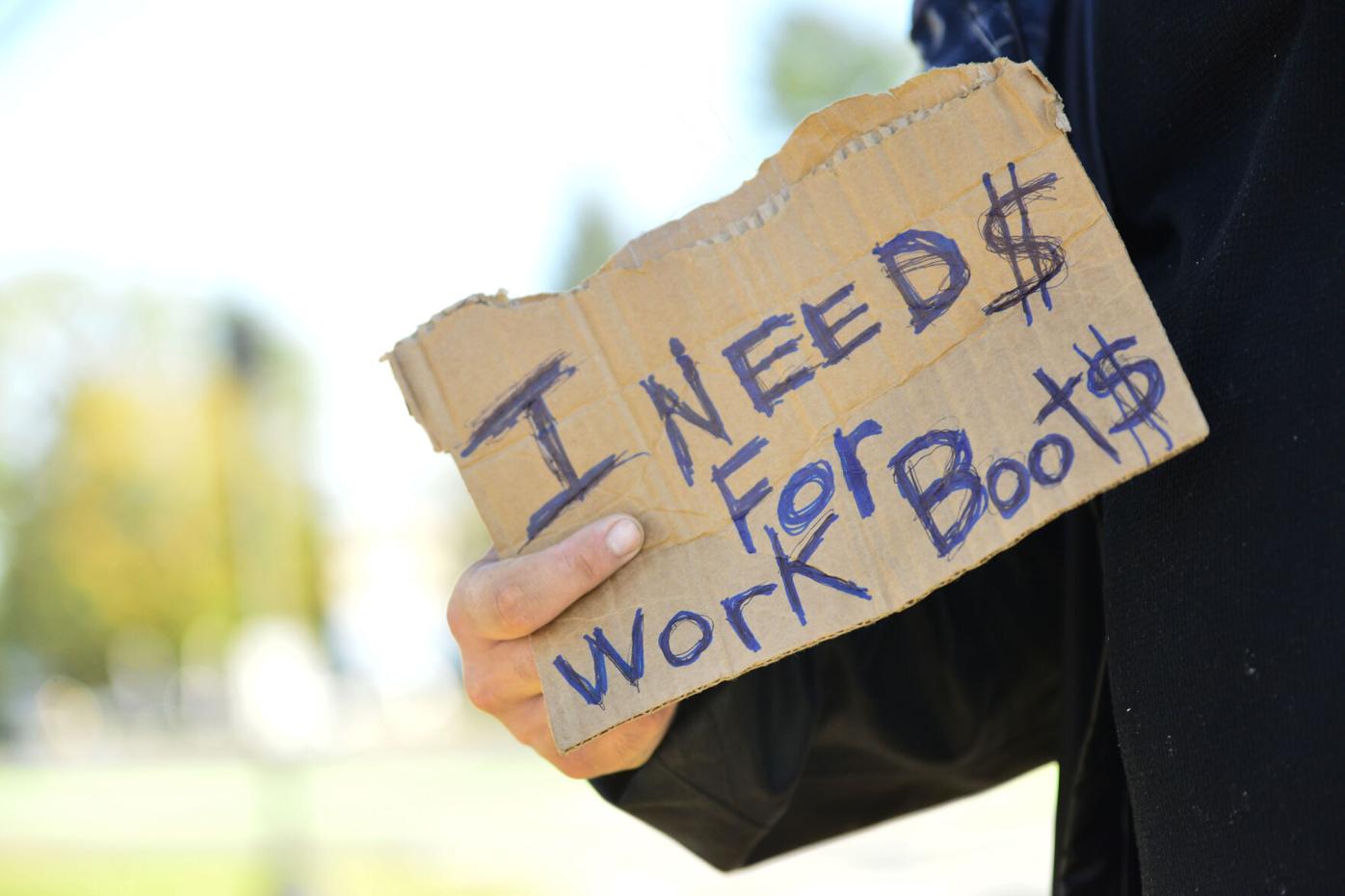 A man panhandles for a new pair of boots, in Brattleboro. 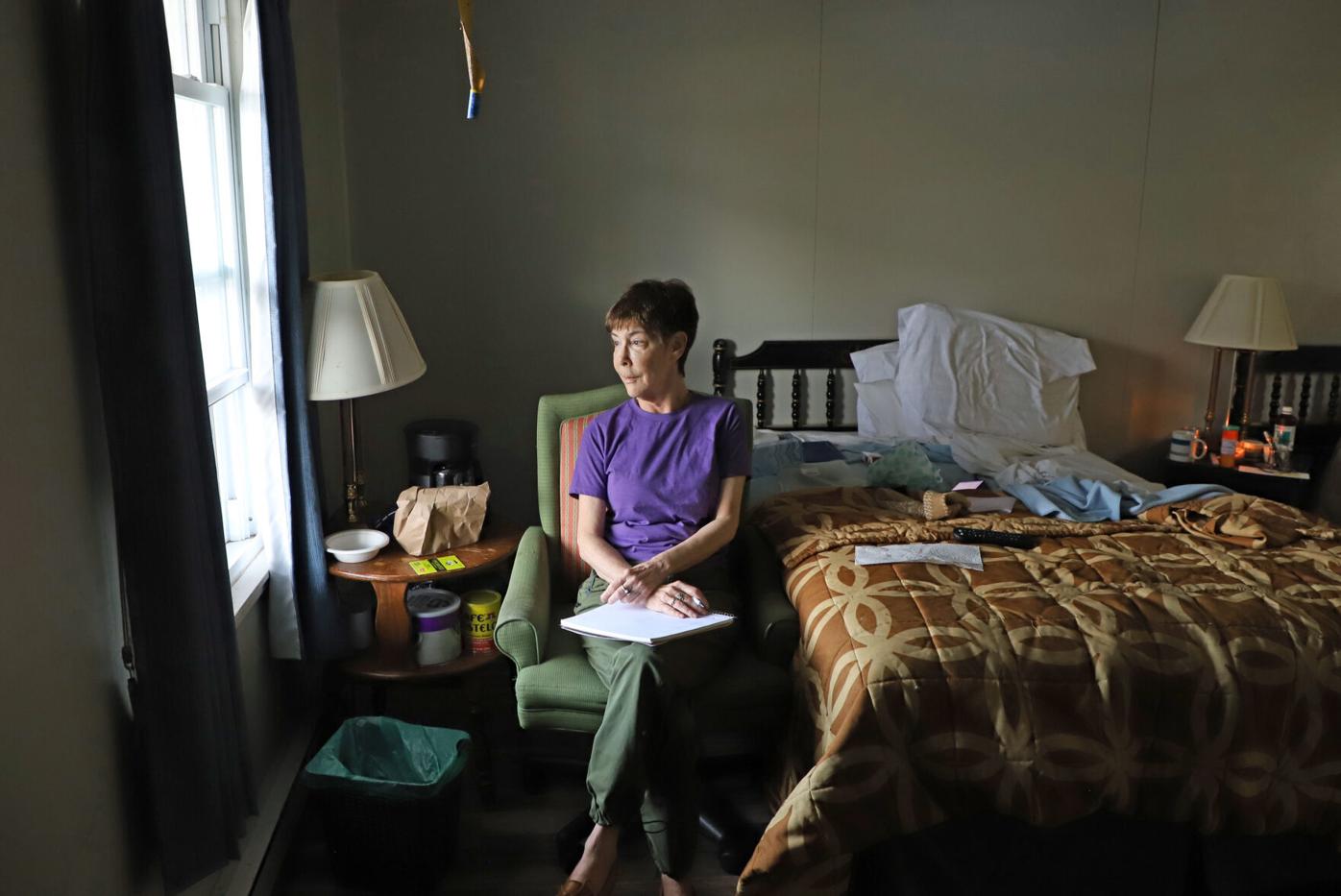 A former performer, "Bonnie" has been living in a Bennington motel via an aid program. She worries that the voucher program will end, and she'll be left homeless.

Tara Barber and 7-year-old son, Ethan, snuggle up while living at the Mid-Town Motel in Bennington. They've been living motel-to-motel for two years, under a state emergency aid program.

A homeless encampment in Brattleboro.

A man panhandles for a new pair of boots, in Brattleboro.

A former performer, "Bonnie" has been living in a Bennington motel via an aid program. She worries that the voucher program will end, and she'll be left homeless.

“We wound up on the street in the middle of the night with our 7-year-old,” Barber, of Bennington, said. “We’d had a family member who offered us to stay at their home, but they changed their mind, so we spent a night out on the street. We surrounded him, kept him between us to keep him warm, just kind of lying there awake until the morning came. You don’t know what that feels like until it happens.”

Troy Weeks knows. The Brattleboro resident said he lost his home in a family disagreement after his father’s death. His mother moved in with his sister, leaving him nowhere to go.

“So that just left me out, and she wasn’t going to change her mind,” Weeks said. “She’s a pretty stubborn woman.”

For individuals and families in Southern Vermont who are beset with bad timing, ongoing financial hardship and poverty, and mental health and substance use disorders, homelessness is an ever-present, existential threat.

Weeks and Barber are just a few of the many Vermont residents who rely on a public safety net that’s rife with gaping holes. One resource highlighted in the news lately is emergency housing aid that places at-risk Vermonters into motels, paid for by the state. Weeks and Barber’s family have been using this program for a while.

What is motel housing aid?

When the COVID-19 emergency was declared, the state significantly expanded the eligibility for its general assistance motel program, which makes motel rooms and beds available to the state’s homeless and near-homeless populations. The thinking was that it would prevent the spread of COVID-19 among people with nowhere else to go.

In July, the state added back some restrictions, leaving about 700 people no longer eligible for temporary motel housing. The eligibility was extended 84 days for pregnant women, families with children, the disabled and other vulnerable people. That deadline arrived on Sept. 21, but the state extended eligibility one more month.

Earlier this week, in response to the public need, Gov. Phil Scott’s administration said it will convert the program to the Emergency Rental Assistance Program, through the state Department for Children and Families. Scott is also asking the Legislature to allocate another $179 million through the American Rescue Plan Act to build more affordable housing.

Advocates: Not enough; do more

Advocates for people experiencing homelessness want to see the state accept funding from the federal government to extend the motel program through the end of the year, and then tap $36 million set aside by the Legislature. They are also asking that homeless people who became ineligible in July be accepted back in for the winter, noting that the high costs and low inventory of rental housing in Vermont make finding a home very difficult.

Barber, the mom of Ethan, 7, said she believes permanent housing, and not stop-gaps, are the way to help end homelessness and the drain of chronic motel stays by people experiencing homeless.

She said the system doesn’t make any sense, and that she just wants “Ethan to be a normal kid.”

“He goes to school and hears people talking about the things they do in their houses, what they have, and he’s here in this one-room hotel room, sleeping on an air mattress, doing his homework out on a tray table outside,” Barber said. “We just want a normal life for him, one where we get to the point that every day is predictable, as predictable as it can ever be. This is not a life.”

Stayed in Brattleboro motel since spring

With the governor’s extension of benefits, Troy Weeks can continue living at the Econo Lodge in Brattleboro, where he has stayed since early spring.

“It puts a roof over my head and I stay warm, and they also have A/C, and they got a shower and a really comfortable bed,” said Weeks, who has a disability and needs a walker.

Weeks said he’s finding it helpful to work with service agencies such as Groundworks Collaborative, a housing and food insecurity group, and Pathways Vermont, a nonprofit that seeks to end homelessness and offers care and community integration to the often-traumatized people living in shelters, on the streets or in the woods.

In Weeks’ case, he was accepted for Section 8 housing.

“So I’ve got a lot of things really rolling for me,” he said. “The team that I have working for me is amazing. They’re just absolutely amazing people.”

Despite the housing crunch, Weeks has faith that he will find a place to live with the help of the organizations.

“I believe in God, and I believe God sent them to me,” he said. “I put in my own legwork, too. You can’t help those who don’t help themselves.”

Prior to the motel, Weeks lived with his parents in an apartment. He said his father was getting sick so Weeks would watch over him and cook his meals.

Nonprofits step in to help fill the gap

Weeks said Groundworks “almost instantaneously” put him up in motel housing after he lost his place to stay. Learning he would still be eligible to live at the Econo Lodge came as “a total relief,” he said.

“It was like, you let your breath out,” he said. “You could lower your shoulders, and you’re like, this is good.”

Weeks said his disability prevents him from working. His biggest focus is on finding Section 8 housing.

“I’m really looking forward to the next month,” he said. “I just wonder what I did to make it all work.”

Asked what he’d say to the governor and state for extending the benefits, Weeks said, “I’d say thank you. It’s your tax money that lets me stay in that motel.”

Weeks is humbled by the program. Though a veteran, he said as a personal choice, he doesn’t take veterans’ benefits because he wasn’t shot or wounded in war.

What will it take to change the system?

While emergency motel stays help keep people from sleeping in cars, all parties recognize that it’s not a permanent solution.

“We need the political will and leadership to make the bold moves necessary to make this a state priority,” the House Progressive Caucus, including Rep. Mollie S. Burke of Brattleboro, said Oct. 18.

State Rep. Dane Whitman of Bennington sits on the House Human Services Committee, which held a joint meeting on the administration’s plan on Monday. Whitman is concerned that the added bureaucracy of the emergency rental aid plan would lead to more people losing shelter, and wants to see expanded eligibility reinstated for the winter.

“I think we need to house folks at the very least through this winter. It would be inhuman to put folks on the street on Jan. 1,” Whitman said. “Furthermore, for the people who lost eligibility, those people are in the streets in the rain and the cold right now. I don’t see why, if there is an available hotel room, why we would deny someone a roof over their head.”