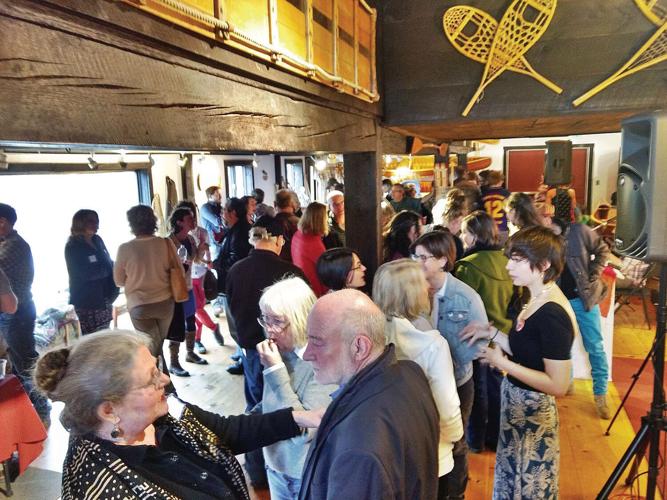 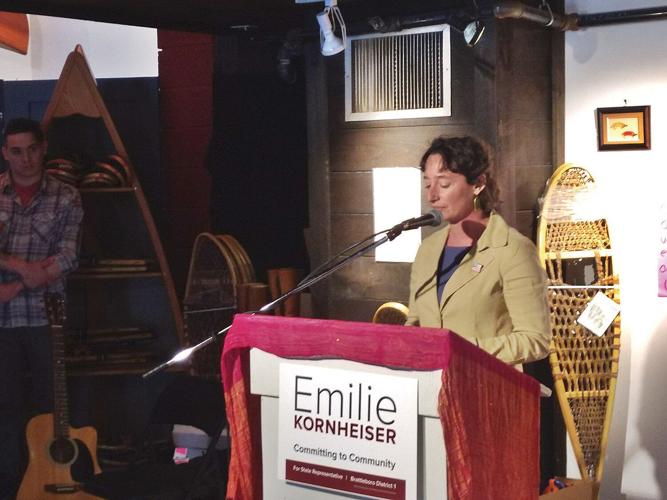 Emilie Kornheiser delivered a speech at her campaign kickoff event on Saturday at American Traders. 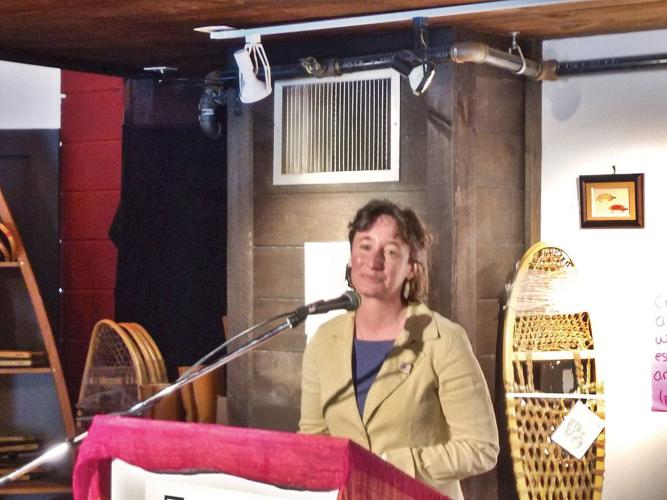 Photos by Harmony Birch - Brattleboro ReformerEmilie Kornheiser delivered a speech at her campaign kickoff event on Saturday at American Traders.

Emilie Kornheiser delivered a speech at her campaign kickoff event on Saturday at American Traders.

Photos by Harmony Birch - Brattleboro ReformerEmilie Kornheiser delivered a speech at her campaign kickoff event on Saturday at American Traders.

BRATTLEBORO — Emilie Kornheiser's superpower is facilitation; that's what she and people close to her say.

On Saturday, close to 75 people showed up as Kornheiser, a Democrat, launched her campaign for the Vermont House of Representatives. Kornheiser is running to represent Windham 2-1, or Brattleboro District 1, which encompasses west of Interstate 91, East Orchard Street, and Upper Dummerston Road.

The district is currently represented by Rep. Valerie Stuart, who intends on running again this year. If both get on the ballot, voters will choose between them in the Democratic primary on Tuesday, Aug. 14.

Kornheiser said her campaign is all about connecting communities.

"I decided to run because I really wanted the lens of politics to be expanded a little bit," she said. "I want people in Montpelier to be represented by someone who understands what it means to live here and what the variety of experiences of most of the citizens in the state looks like."

Kornheiser, who moved to Vermont at 17 to attend Marlboro College, went from undergraduate to small business owner, to single mom and graduate student. "I've lived a lot of different lives here," she said.

As a graduate student, Kornheiser said, she reached out to communities across the globe and helped them develop. At the campaign kick off, she joked about bringing internet connectivity to Tanzania and still not having high-speed internet in areas of Vermont.

Kornheiser also worked in early childhood development, as a case manager, a specialist for the state's Promise Community initiative, and a director for the state's Early Childhood Action Plan.

As a volunteer, she's currently a Brattleboro town representative for District 1, formerly the vice president for the Brattleboro Food Co-op board of directors, a founding member of the Windham County Action Network, and a Vermont Commission on Women member.

Many of Saturday's attendees knew of Kornheiser but didn't know her personally.

Rieske believed Kornheiser has "good intention and purpose in what she's doing." But she said she hasn't fully decided whether to support Kornheiser or Stuart, as she's still learning about Kornheiser's positions on issues.

While Stuart has done a lot of good as a state representative, "I'm looking for some new energy," Rieske said.

Kornheiser's main legislative goals include livable wages, fighting climate change, strengthening the state's healthcare, education, affordable housing, and social supports, and giving Vermonters access to strong utilities, such as high-speed internet. She said she couldn't promise direct policy change as a freshman representative, but that she could promise to facilitate conversations between all parties to better strengthen Vermont's policies.

A preview of what those conversations would look like was exhibited at Saturday's event.

During a question and answer session, Kornheiser, who believes firmly that the minimum wage should be raised, addressed how the state could support local companies through the transition.

"When I walk out my door, with the beautiful marsh, I can think that I'm living in some sort of utopia, but I'm a part of a country that's struggling right now and a state that's struggling," she said. To make that ideal a realty for everyone, there needs to be a better tax-funded safety net, she said.

"We need to make sure that the early education centers are able to pay their employees that new wage. They need to be supported in that way," she said. She thought the same could be said for small businesses. "If we're going to be changing policies we need to be compensating business owners," she said.

She also said state government should make it easier to comply with new policies and regulations.

"It's very convenient for me living in West Brattleboro with a long driveway and compost bins," she said. "If I was living in a tiny apartment, I think it'd be a whole other issue. How are we creating the infrastructure so people can make those changes that we are incentivizing by policy?"

Recognizing the difficulties people face with new policy changes helped endear Kornheiser to her potential constituents. Eric Cummings said that he was concerned about people in small places being able to compost. "I was glad to hear that she had similar concerns," he said.

Kornheiser already has 20 signatures from District 1 constituents supporting her name being added to the primary ballot.

Stuart told the Reformer her eight years as a representative have been productive. "Most recently, I was one of the General Assembly's leading proponents for sensible gun legislation," she wrote in a statement to the Reformer. "Right after the massacre at Parkland High School in Florida, I wrote opinion pieces that were featured in the Brattleboro Reformer and The Commons, strongly advocating for ending the slaughter of innocents by banning bump stocks and keeping military-grade guns out of the hands of those who pose a danger to themselves or others."

Stuart said she's most interested in protecting vulnerable voices such as children and standing up for people who are economically disadvantaged.