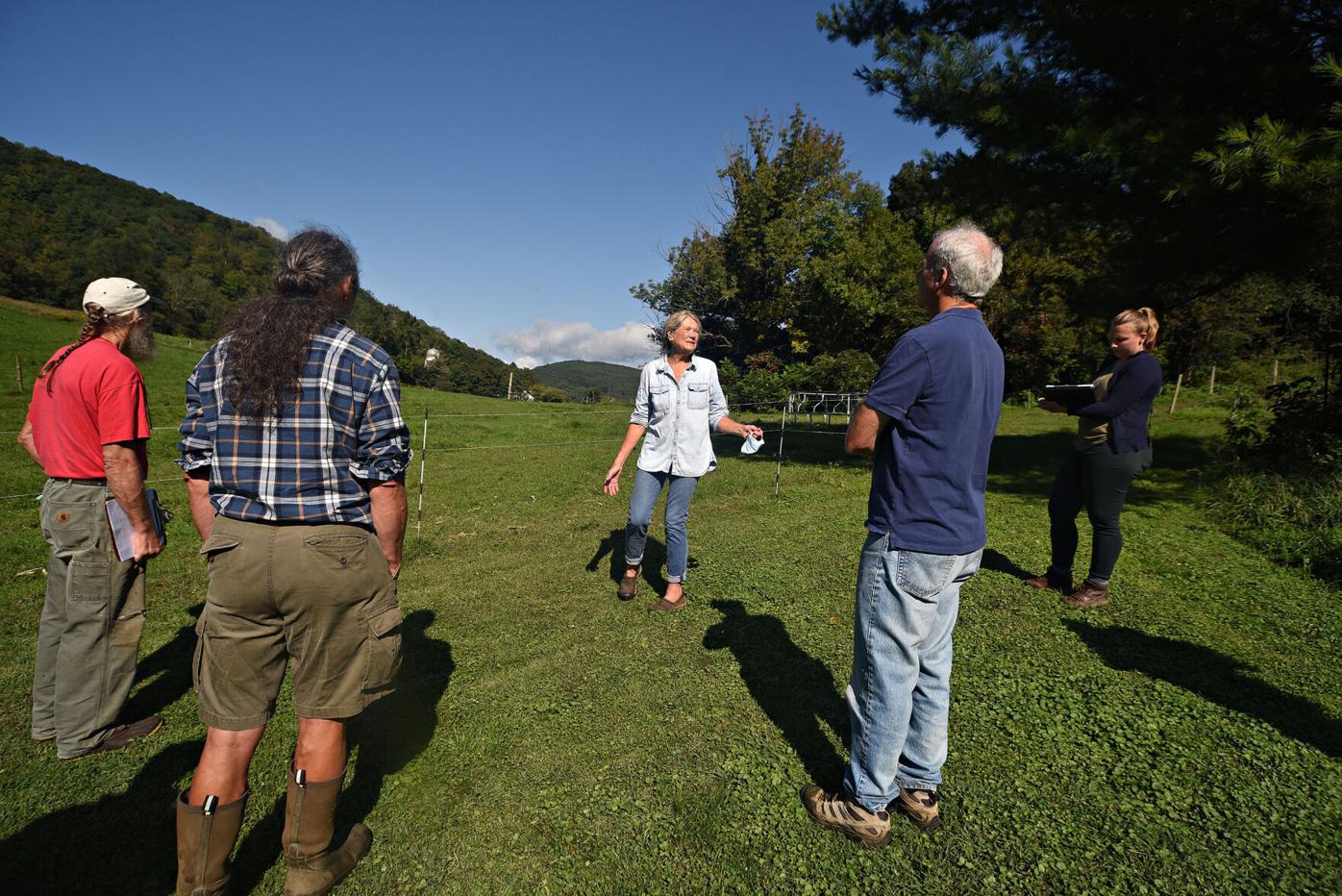 CAROLINE BONNIVIER SNYDER — BENNINGTON BANNER Stina Kutzer, who owns Gammelgarden Creamery in Pownal along with her sister Marta Willett, gives a tour of the creamery and the land on Monday morning. 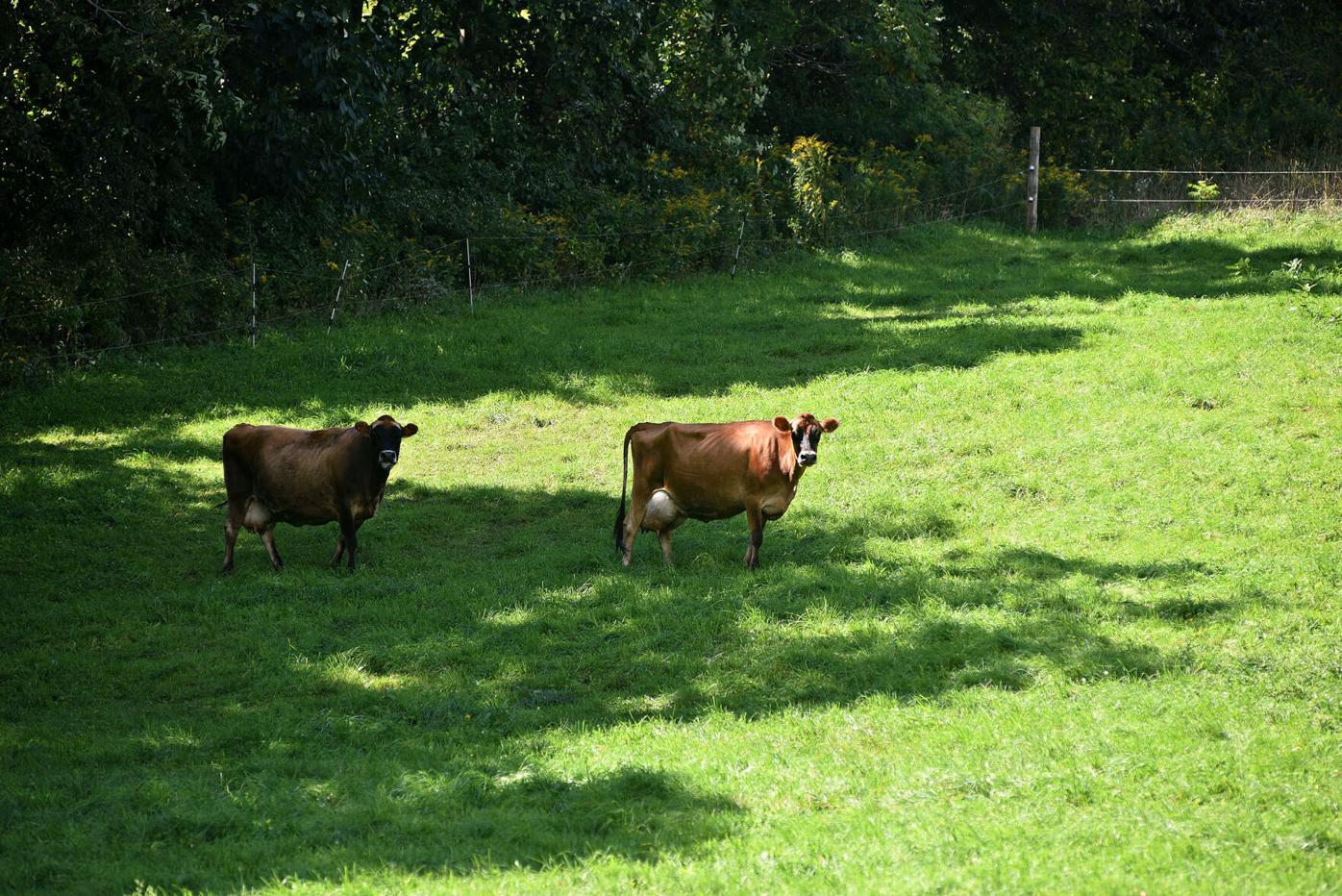 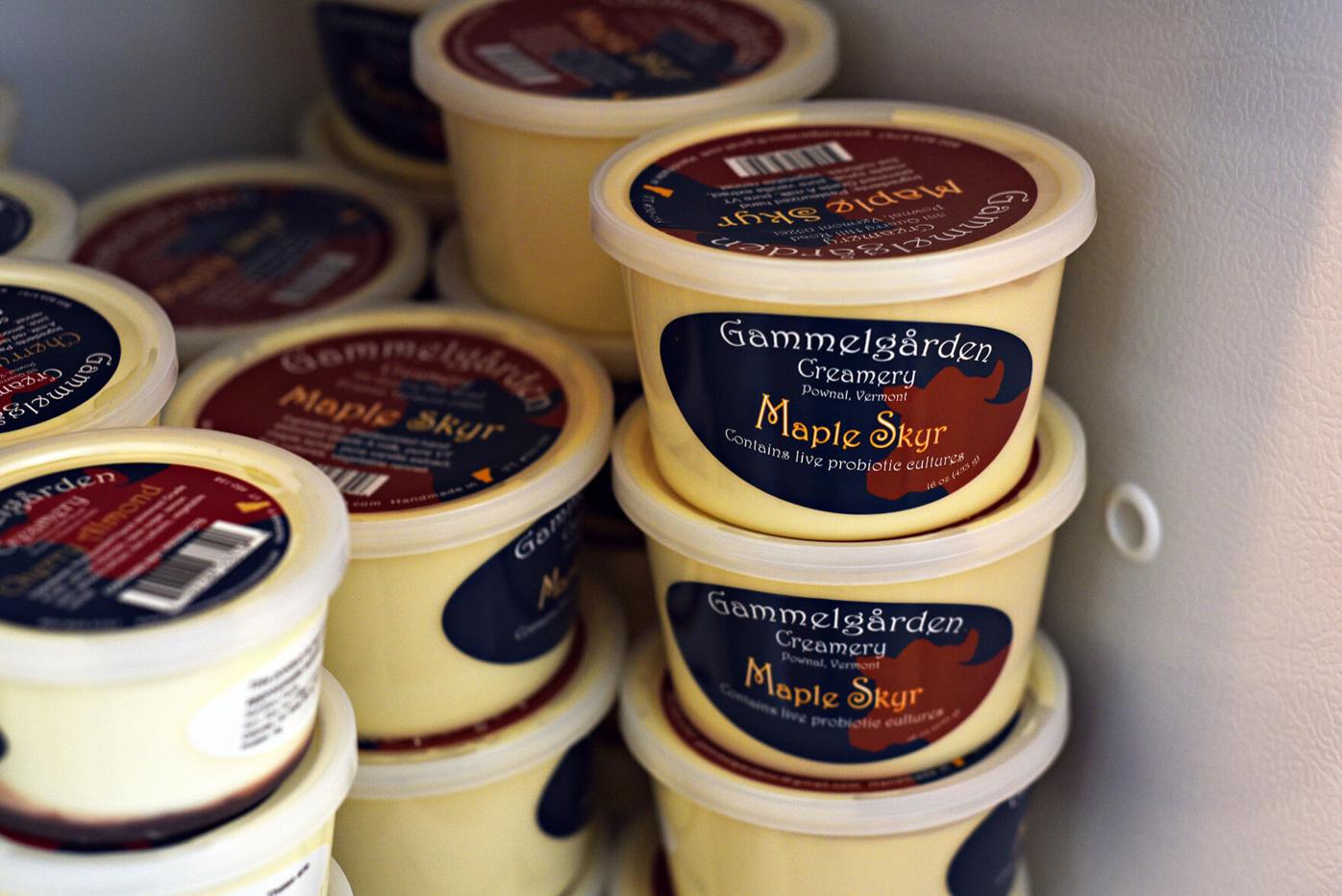 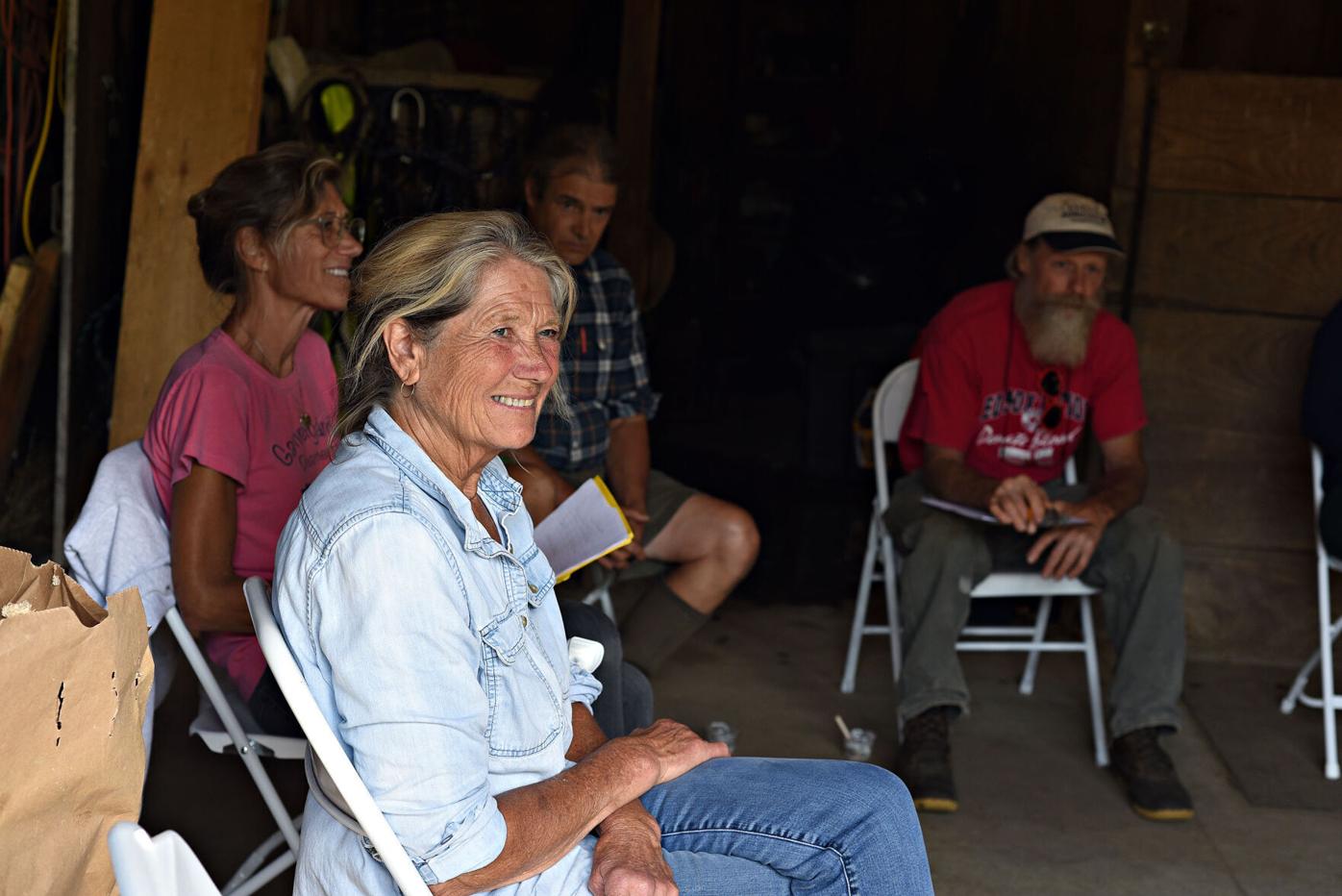 CAROLINE BONNIVIER SNYDER — BENNINGTON BANNER Stina Kutzer, who owns Gammelgarden Creamery in Pownal along with her sister Marta Willett, in background at left, have a conversation with other farmers, residents, politicians, and those involved in agriculture, in their barn on Monday morning.

CAROLINE BONNIVIER SNYDER — BENNINGTON BANNER Stina Kutzer, who owns Gammelgarden Creamery in Pownal along with her sister Marta Willett, gives a tour of the creamery and the land on Monday morning.

CAROLINE BONNIVIER SNYDER — BENNINGTON BANNER Stina Kutzer, who owns Gammelgarden Creamery in Pownal along with her sister Marta Willett, in background at left, have a conversation with other farmers, residents, politicians, and those involved in agriculture, in their barn on Monday morning.

POWNAL — The five cows whose milk goes into Gammelgården Creamery’s thick, slightly tangy Icelandic-style skyr, butter and buttermilk kept their distance from a meeting of farmers, lawmakers and interested consumers on Monday morning at the homestead dairy tucked away in North Pownal.

Content to enjoy a late breakfast of clover under picture-postcard skies, the black and brown Jerseys ruminated in the farm’s hillside pasture, far away from discussions of regulation, distribution, e-commerce, and how to get more locally-grown food into area classrooms and institutions.

Back at the barn, a small gathering of local farmers, interested citizens and state Rep. David Durfee, D-Bennington 3, joined Katy Crumley of the nonprofit Bennington County Conservation District for “Farmhouse to Statehouse,” a series of 11 conversations hosted by farms across the state over the past several days.

After a tour of the creamery’s milking and production operations, participants sampled some of the creamery’s skyr — technically, a soft cheese, but used and much enjoyed like a yogurt — and sat down to talk about issues. Discussion topics included the impact of the COVID-19 pandemic on Bennington County farms and farmers, teaching residents how to use fresh produce grown by area farmers, and cost barriers to growing distribution.

For Gammelgården, whose wholesale range extends as far south as Great Barrington, Mass., there are several barriers to growth, sisters Stina Kutzer and Marta Willett explained. The creamery distributes its own product to stores within a 60 mile radius, transporting their product in coolers. Purchasing a refrigerated delivery truck is expensive, they said. And distributors who would help them get into more stores and institutions want a significant cut of the profit in return.

Kutzer and Willett, who started Gammelgården Creamery with a single jersey cow, said COVID impacted them directly when one of their largest customers, Williams College, closed its physical campus and sent students home early in the pandemic. Just like that, 60 to 70 percent of their business evaporated.

While the business added customers — notably, Williams students, parents and alumni — moving to e-commerce also added cost, because as a small business they were paying retail for supplies such as labels and containers, without experience in sourcing those materials, the sisters said,

“We scrambled quite a bit, that we started shipping e-commerce and setting up a website … but we didn’t know what we were doing,” Kutzer said. “And that added a lot of cost.”

For vegetable farmer John Primmer of Wildstone Farm in Pownal, part of the pandemic challenge was learning how to navigate the changing waters of customer demand and regulations. At first, he said, customers wanted to pick up orders, because they were afraid of shopping, which forced him to pivot to e-commerce. “Which meant we had to figure out how to do online ordering,” he said.

Then, folks signed up for the farm’s CSA. “It picked up like crazy, but it was almost too much,” Primmer said.

For Primmer and his wife, transitioning to online shopping was time-consuming, not only for learning new skills but also taking orders — “always at night.”

At first, orders all got written down in a notebook. But that proved time-consuming, and the business sought a grant for technical upgrade. “Apparently we were the only ones that asked for a printer,” he said.

While many share the goal of getting local food into schools and institutions, Kutzer and Willett said those potential customers have existing relationships with distributors that prevent them from accessing those sale points.

Kutzer said the creamery wanted to sell at the former Southern Vermont College, but was informed that the distributor they’d need to use to make that happen would take 28 percent of sales.

From the consumer perspective, Olivia Carlson of Rutland said as someone who doesn’t have cooking experience, the prospect of cooking with fresh produce she’s never seen before can be daunting. She said she appreciates when farmers include recipes with the produce so she can give it a try.

That led to a longer discussion about local food in schools, and the fading prevalence of what used to be called “home economics” programs in schools that teach skills like cooking to middle and high school students.

Crumley, of the Bennington County Conservation District, and Durfee, D-Bennington-3, both said they were willing to help area farmers and growers, and expressed willingness to help bridge the perceived gap between Montpelier and the southern end of the state.

Crumley noted that the Conservation District is not a regulatory agency — meaning that its advisors can visit to make sure farms are meeting state regulations, such as those surrounding runoff and water quality, without the risk of violations or fines.

She also pointed out that the Bennington County Regional Commission has a ”food atlas” on its website directing folks to local growers. “It’s a list ... where you can get local foods, the farmers phone number, those sorts of things, in an effort to make that more public.” (A similar product can be found at vtfarmtoplate.com.)