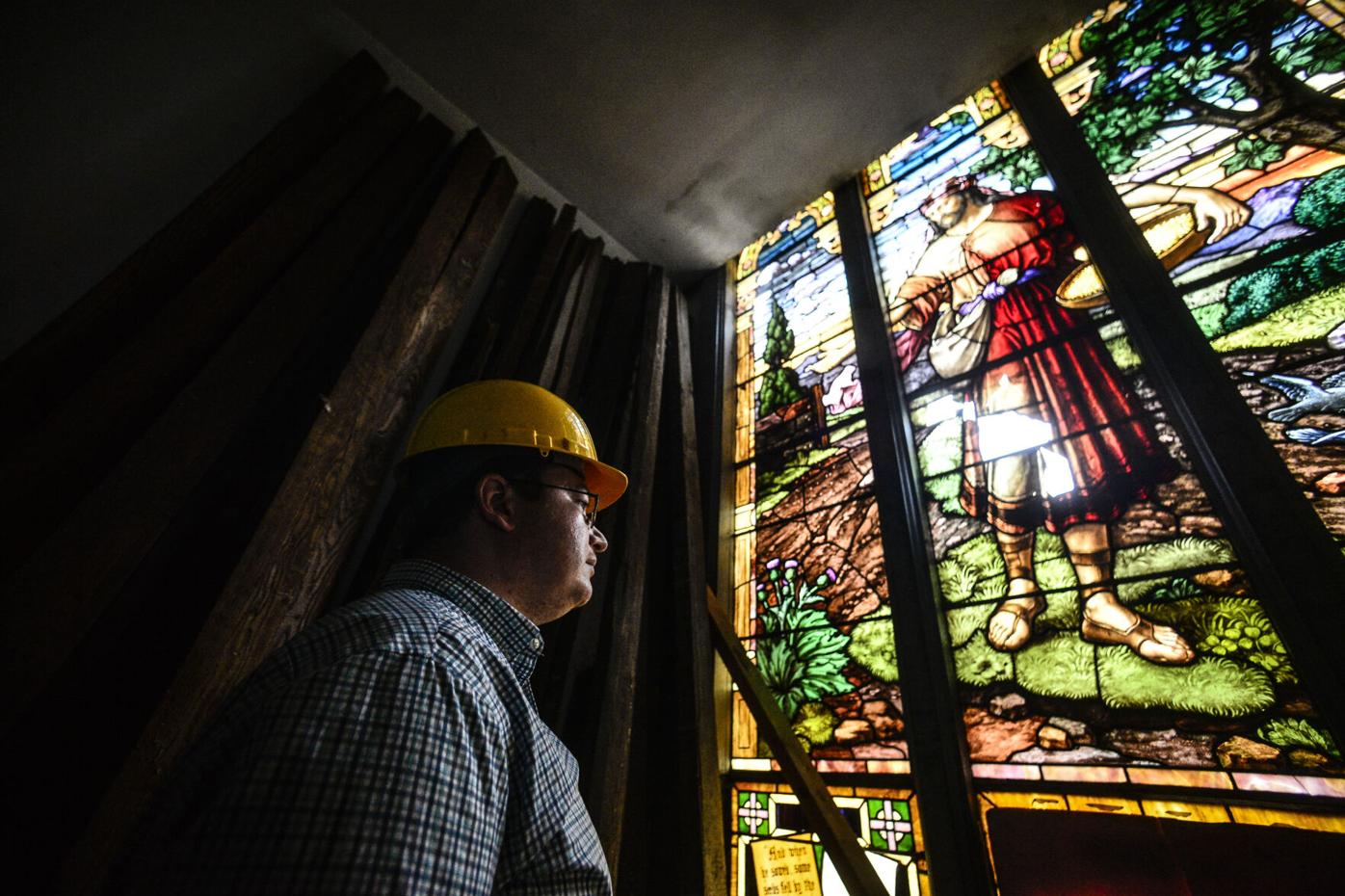 Elijah Zimmer, with the Rockingham historic preservation commission, looks at the stained glass window at 66 Atkinson Street, in Bellows Falls, during a tour of the building by members of the Rockingham Historic Preservation Commission on Monday. 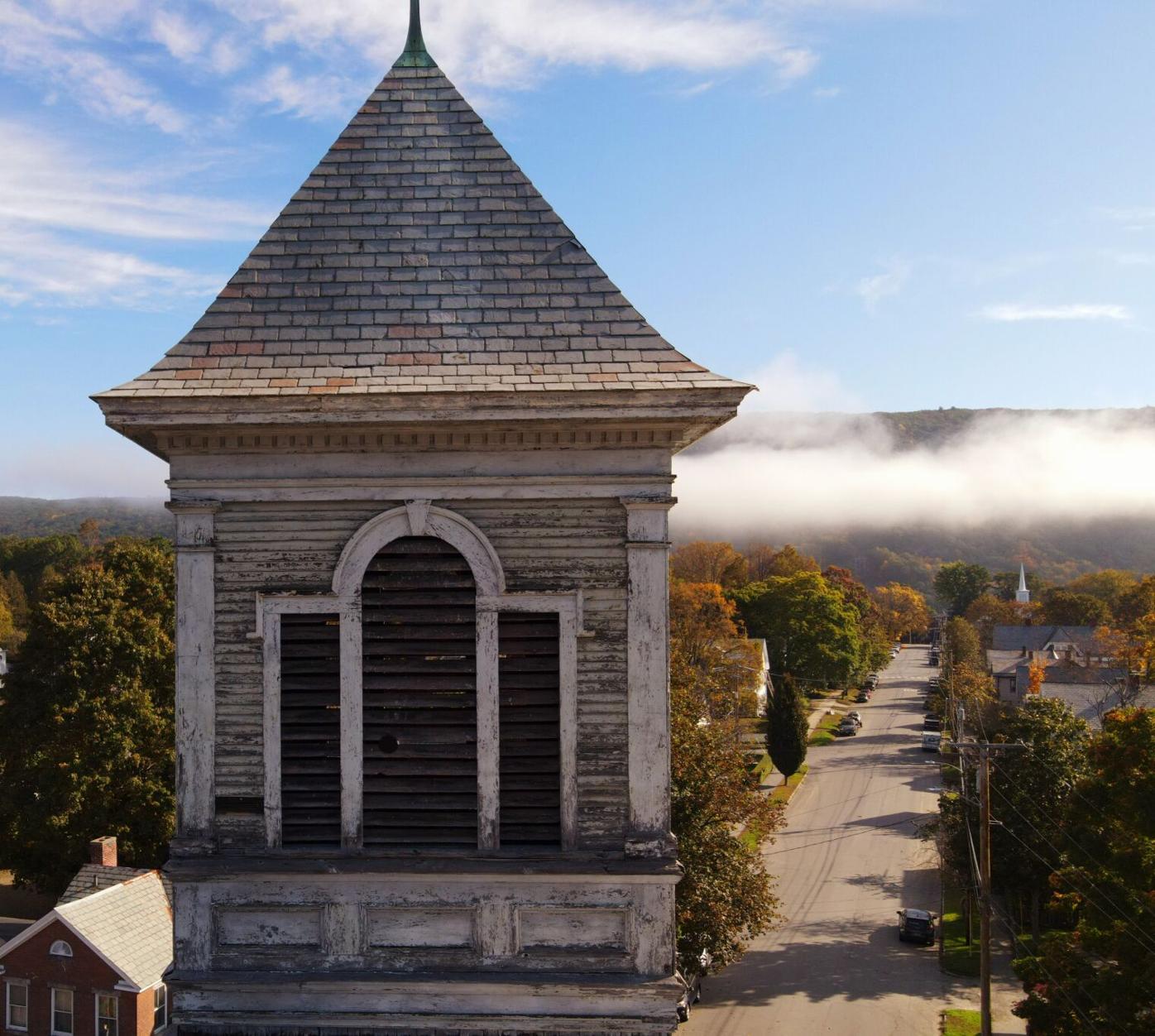 The Rockingham Select Board voted to save the steeple on the old Methodist Meeting House in Bellows Falls, which is scheduled for demolition. 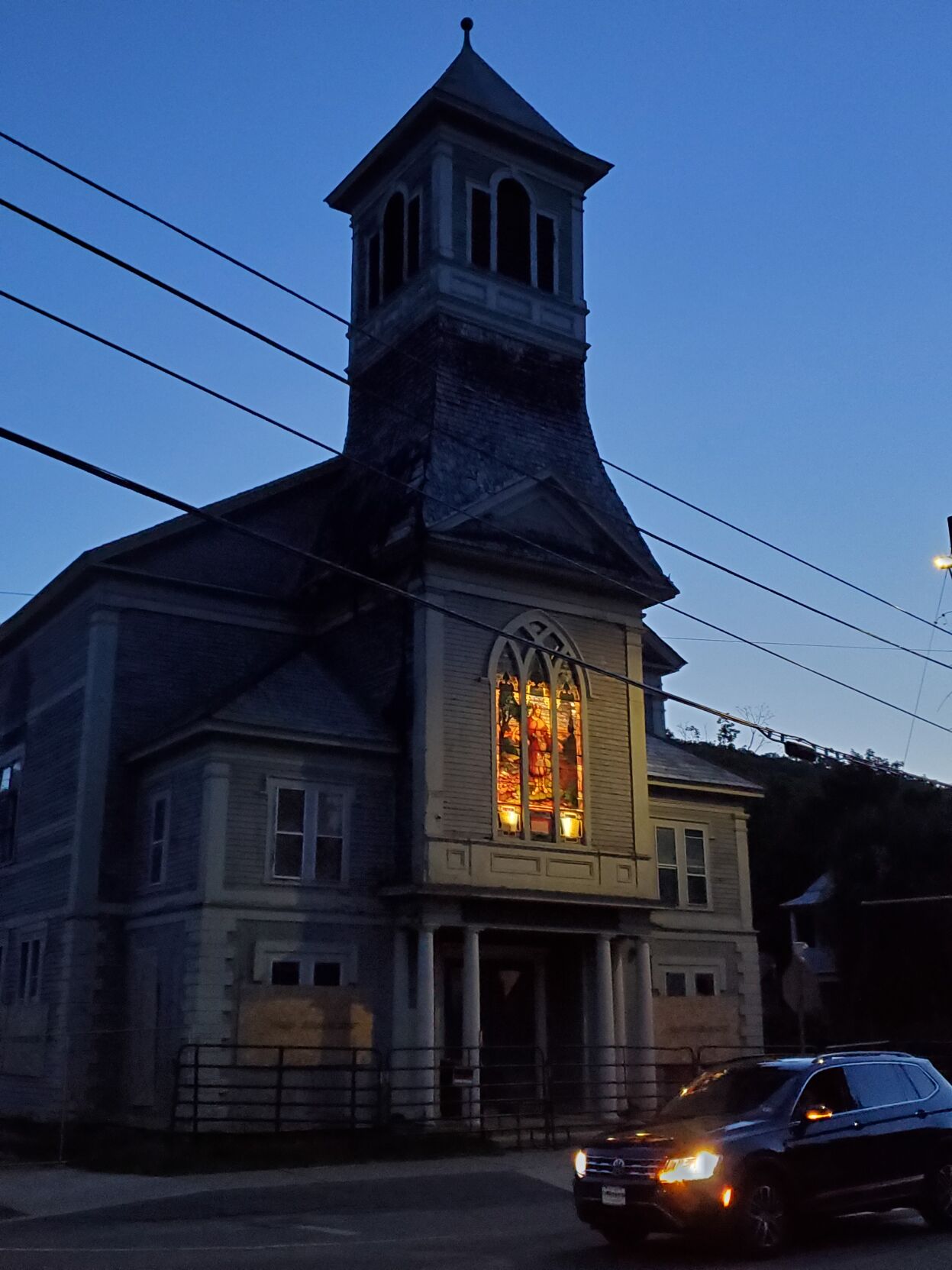 The plan to save the steeple of the former Meeting Waters YMCA building and its iconic stained glass window have hit a major roadblock.

Elijah Zimmer, with the Rockingham historic preservation commission, looks at the stained glass window at 66 Atkinson Street, in Bellows Falls, during a tour of the building by members of the Rockingham Historic Preservation Commission on Monday.

The Rockingham Select Board voted to save the steeple on the old Methodist Meeting House in Bellows Falls, which is scheduled for demolition.

The plan to save the steeple of the former Meeting Waters YMCA building and its iconic stained glass window have hit a major roadblock.

BELLOWS FALLS — The plan to save the steeple of the former Meeting Waters YMCA building on Atkinson Street and its iconic stained glass window have hit a major roadblock.

Municipal Manager Scott Pickup told the Bellows Falls Village Trustees Tuesday evening that the costs of cleaning all the bird and bat manure from the steeple so it could be reused are very high.

“It’s not going to be cheap,” Pickup said, noting the final decision rested with the Rockingham Select Board.

And the other bad news, he said, is that the stained glass window the town of Rockingham hoped to save is not from the Lamb stained glass studio of New York City as initially thought, and thus isn’t worth the money to save it.

The building, which began life as a Methodist meeting house, was built in 1835, and is the second oldest church building in the town.

The dilapidated structure, which until recently was the longtime headquarters for the Meeting Waters YMCA, became town property this summer in an agreement with the most recent owner, Christopher Glennon of Bellows Falls, who had fallen behind in taxes.

Glennon had purchased the large building for $1 back in 2017 from the YMCA, with quixotic plans to turn it into a community arts center.

But Glennon was unable to do the most basic repairs to the building, and the village of Bellows Falls, using its unsafe building ordinance, tried to force Glennon to take action to make structural repairs.

Last month, the village trustees refused to participate in the costs of demolition, leaving all the decisions for the building up to the Rockingham board, which agreed to hire a demolition company at a cost of $58,700.

That didn’t stop Bellows Falls Village Trustee James “Jiggs” McAuliffe from blasting the Rockingham select board for what he said is the irresponsible spending of $20,000 of town taxes to try and salvage some items from the church building before it is demolished.

In particular, McAuliffe singled out Select Board member Elijah Zimmer, a member of the Rockingham Historic Preservation Commission, and who has championed saving what the town could from the 1835 building. The structure sits at a prominent location at the head of School Street, at the intersection with Atkinson Street.

“I call it ‘Elijah’s Folly,’” McAuliffe said, noting the building is beyond repair and saving parts of it is fiscally irresponsible. He said he has watched its deterioration for the past 70 years, as previous owners “stripped” the building of anything that was valuable.

The new Bellows Falls Brown-Fuller Memorial Park is a result of volunteer work and fundraising, McAuliffe said, and that’s what should have happened with 66 Atkinson Street.

Last week, the select board voted to spend funds to remove the steeple, with plans to turn it into a storage shed; and to remove “The Parable of the Sower of Seeds,” in hopes of selling it at auction to recoup the costs of demolishing the building, as well as funding other historic preservation projects.

Pickup said he had just learned from Walter Wallace, the town’s historic preservation coordinator, that the stained glass window — the last one remaining in the church — is not in the Lamb inventory, which is listed in the Library of Congress.

Since it isn’t a Lamb window, its value is considerably less. Restoration costs of the window are estimated at between $50,000 and $60,000, he said. If it had been a Lamb window, it might have brought upwards of $50,000 at auction, Pickup said.

He said it will be up to the Rockingham board to make a final decision. The demolition is expected to take place shortly after December 1.

Zimmer responded with a statement: “It is sad that the only way to save our heritage is to see it monetized and ripped away and sold out of state to the highest bidder.

“One week ago the Select Board voted to salvage the stained glass window from the old Methodist Church at 66 Atkinson Street in BF, hinging on the ability to sell the piece at a significant profit. Also to potentially salvage the steeple top as a storage shed if practical.

“Sadly, this week we learned that research we had been waiting for, to identify the maker of the window, proved inconclusive, making it of little monetary value on the art market. If it had been proved to be the work of the Lamb Studio of New York as suspected, past auction results suggest it would be worth many thousands of dollars even without restoration,” he added.

”I can’t speak for the select board, but I feel that without being able to recoup the costs of salvage, these items cannot be saved by the town, unless a benefactor comes forward to cover the costs. All due diligence was done before lining up any contracts or spending any funds,” he said.

Pickup said that if the town wants to reuse the steeple, all the bird and bat manure has to be cleaned up. It doesn’t need to be cleaned up if the building is just demolished, he said.

Wallace said Wednesday the town has done a lot of research into the aspects of saving the various items from the former meeting house, including the costs.

“It turns out after concluding research that the value of the window is much less than it would cost to rescue it,” said Wallace on Wednesday. “Not everything can be preserved, and in this case would require private philanthropic support for removal, storage, and restoration.”