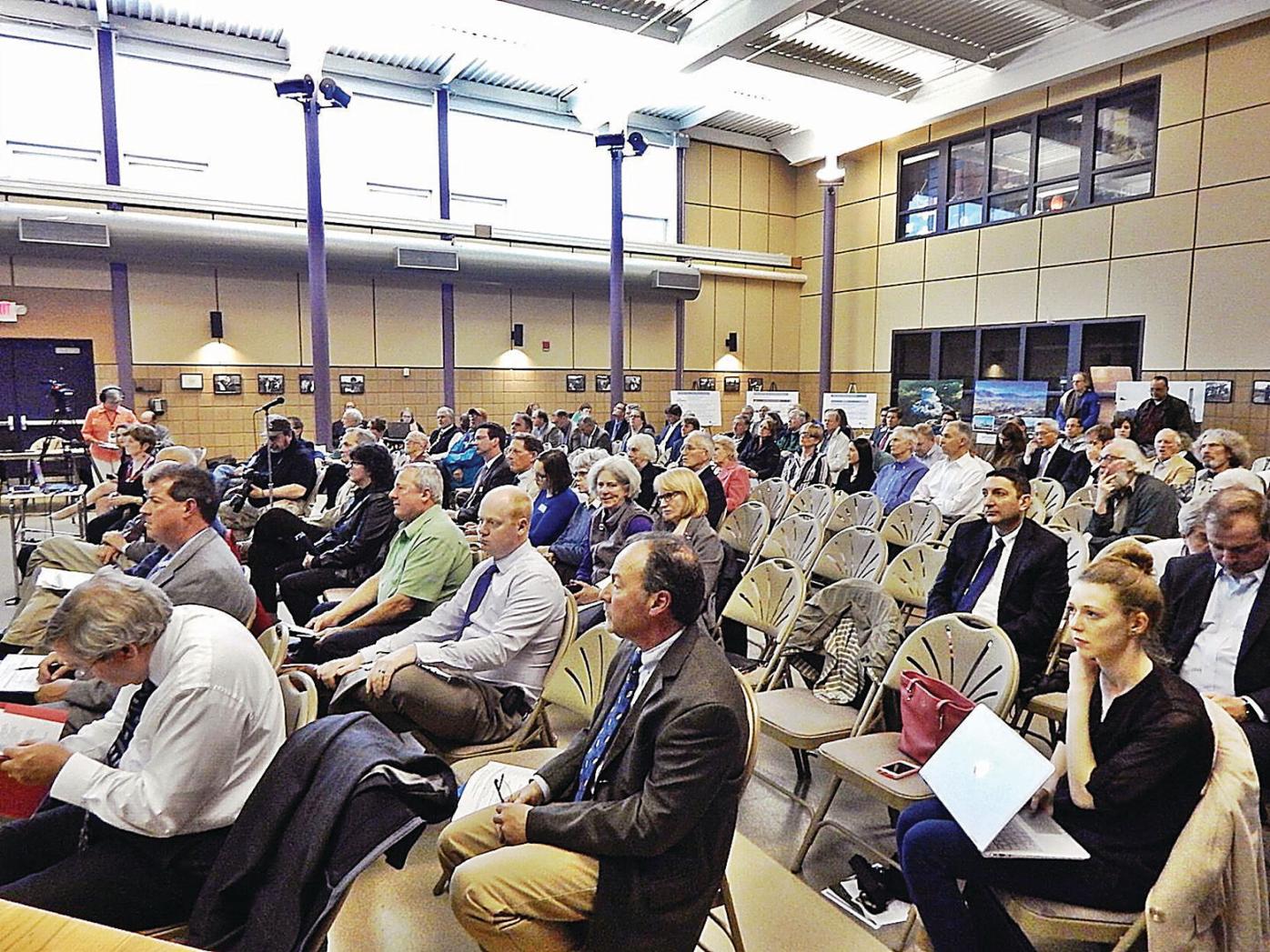 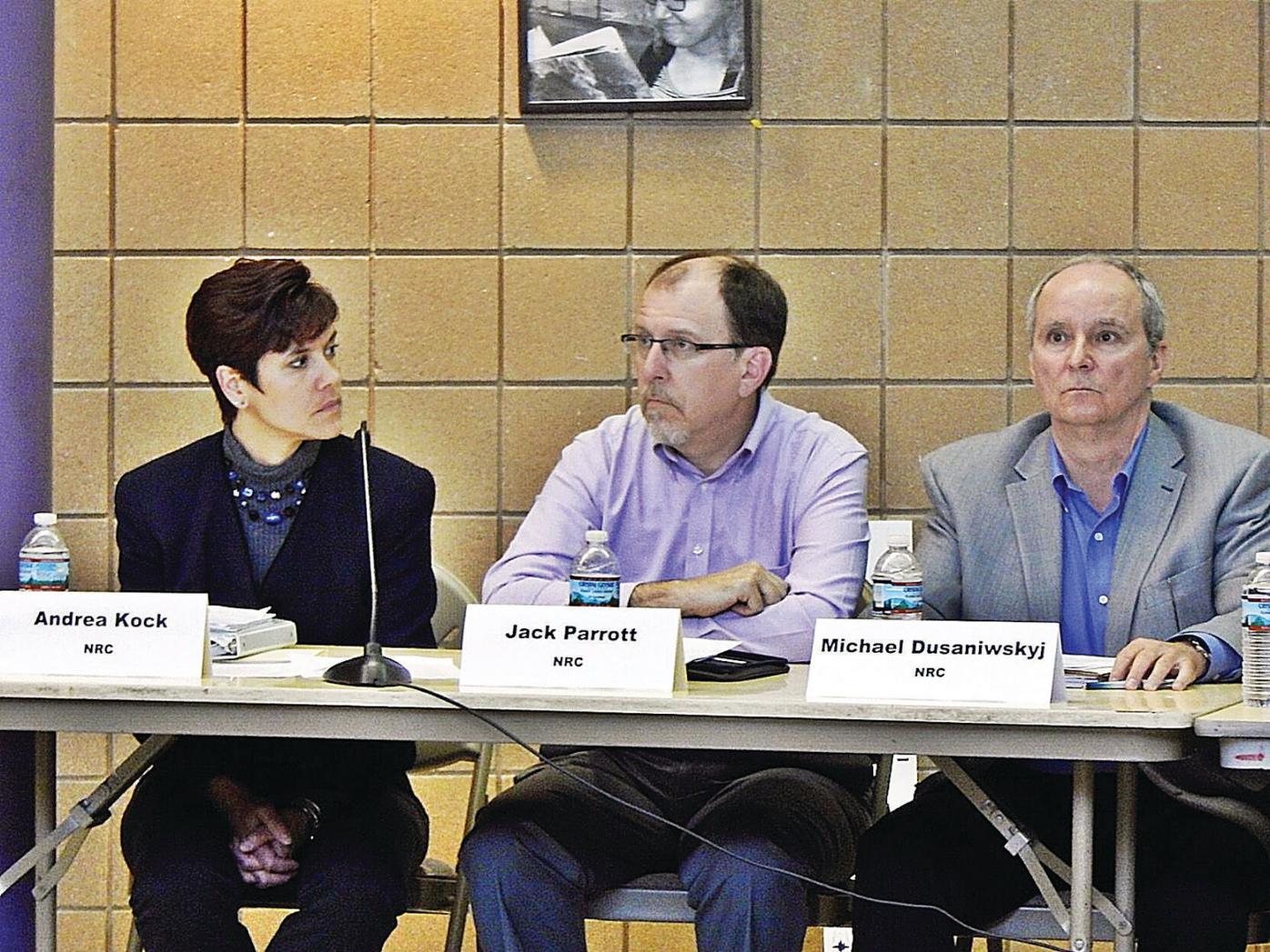 On both of those issues, NRC officials pointed directly to NorthStar Group Services, the New York company that wants to buy and clean up Vermont Yankee.

Facing questions about redevelopment of land that hosted a nuclear plant for 42 years, NRC representatives assured local and state officials that NorthStar will have "unrestricted use" of the site after decommissioning.

And in response to questions about decommissioning funding, federal officials said they would be watching NorthStar closely - though it will be up to the company, and no one else, to make sure there's enough money for the job.

"From the NRC's perspective, the responsibility for funding is with the licensee — it's very clear and very straightforward," said Andrea Kock, deputy director in the NRC's division of decommissioning, uranium recovery and waste programs.

"If there's a shortage, they're responsible for making up that shortage," Kock said. "Our regulations require that they have decommissioning funding assurance at all times."

The NRC is reviewing what would be a first-of-its-kind transaction: Entergy, having ceased power production at Vermont Yankee at the end of 2014, wants to sell the plant and its decommissioning trust fund to NorthStar.

The federal agency is taking public comment on the proposed license transfer and NorthStar's post-shutdown decommissioning activities report until June 23.

In two prior instances in the U.S., there have been NRC license transfers for decommissioning nuclear reactors. But this would be the first time that a decommissioning company is taking outright ownership of a plant and also assuming responsibility for its radioactive spent fuel.

NorthStar says that arrangement will allow it to clean up most of the Vermont Yankee site by 2030 and possibly as early as 2026. That's decades earlier than Entergy had planned.

The Vermont Public Service Board also must approve the sale. Last month, the board held a public hearing in Vernon as part of its review.

The NRC had been more reluctant to commit to a public meeting here. But after the Vermont Nuclear Decommissioning Citizens Advisory Panel and the state's congressional delegation submitted written requests, the federal agency agreed to send representatives to the advisory panel's regular meeting Thursday in Brattleboro.

Earlier in the day, Kock and three other NRC officials took the opportunity to tour Vermont Yankee. "I think it helps us to put our own eyes on a site, gather our own thoughts as well as having an understanding of what's going on on the ground," she said.

In the evening, the NRC contingent spent more than two hours fielding questions from panel members and taking comment from a large crowd gathered at Brattleboro Area Middle School. As was the case at the April Public Service Board hearing, public opinion was divided among those who are skeptical of NorthStar's plans and those who are lobbying for approval of the sale.

Kock stressed, however, that federal officials are not yet ready to offer opinions.

"We won't be able to give you any bottom-line conclusions about what we think about this or that," she told the crowd. "We haven't drawn any conclusions one way or the other at this point in the review."

In general, the NRC is evaluating NorthStar's technical and financial ability to do the job.

At Thursday's meeting, NorthStar Chief Executive Officer Scott State - who is a nuclear engineer - used posters and a slide show to emphasize his company's technical experience in removing power plants and other large structures including a former NASA launch pad and the old Yankee Stadium.

"Everything that we do as a company has involved remediating contaminated facilities or sites," State said. "And that's exactly how we view Vermont Yankee."

On the financial side, State reiterated his company's plan to divide the Vermont Yankee decommissioning project into approximately 900 smaller jobs.

"When we broke it down into those work elements, we assigned a cost to each of them, we added all that cost up, and that cost had to be less than or equal to the amount of money we had to work with to do the decommissioning," State said.

"Our first line of defense is, we simply don't take money out of the trust fund unless we've actually executed the work that the money is tied to," he added.

State also noted that NorthStar is guaranteeing the availability of an additional $125 million if the plant's decommissioning trust fund doesn't prove adequate.

But there have been many concerns about NorthStar running out of money before decommissioning is complete. If that happens, "we'd like to know who's on the hook," Advisory Panel Chairwoman Kate O'Connor told NRC officials.

It's clear that the NRC, however, doesn't see the issue in the same light. Federal officials aren't thinking about who will pick up the slack for NorthStar; rather, they expect that NorthStar itself will address any financial problems encountered during decommissioning.

"Annually, we look at how much is left in the fund, what's their estimate for how much it's going to cost to complete the decommissioning, and then we look to see if there are any gaps," Kock said.

If there are gaps, an NRC license holder must address them. That can happen "in a variety of ways," Kock said, including contingency funds and parent company guarantees.

Once the Vermont Yankee job is done, there's also the question of what might happen to the property.

Bruce Watson, chief of the NRC's reactor decommissioning branch, said he expects no federal limitations on the portions of the site that are decommissioned and subsequently released by the agency.

"To date, all decommissioning sites in the United States - including the 10 power reactors that have completed decommissioning and had their licenses terminated - have been released for unrestricted use, meaning the owner can use the property for whatever purpose they have," Watson said.

About a third of those sites now host non-nuclear power plants, Watson said. Several sites have not been redeveloped, and others - like a portion of Maine Yankee - host a park.

But there's a complication: Vermont Yankee is a relatively small site, and its spent nuclear fuel will remain there at least until 2052 and possibly longer if federal officials can't find a solution for long-term nuclear waste disposal.

That means a portion of the plant's 125 acres will be dedicated to a dry cask fuel storage site under 24-hour guard, even after the owner has finished cleaning up the remainder of the land. What's not yet clear is how big that secure area will be.

"Frankly, that's going to make a difference between whether or not solar makes sense or whether they should have hope of ever doing any other kind of light industrial (use)," said Chris Campany, Windham Regional Commission executive director.

At this point, the NRC doesn't know, either.

"There is not a standard size. It is site-specific," NRC spokeswoman Diane Screnci said Friday.

"Once the site has been cleaned up, the company could request that a portion be released for unrestricted use - the portion that does not include the dry cask storage installation," Screnci said. "We would evaluate the request to assure it meets NRC decommissioning requirements and security requirements."

State told the crowd that NorthStar has no specific plan for redevelopment at this point.

"We are not interested in being the long-term owner or developer of the site after it's clean," he said. "What we're interested in doing is working with the local community to find the highest and best use of the property."

Mike Faher reports for the Reformer, VTDigger, and The Commons. He can be contacted at mfaher@vtdigger.org.