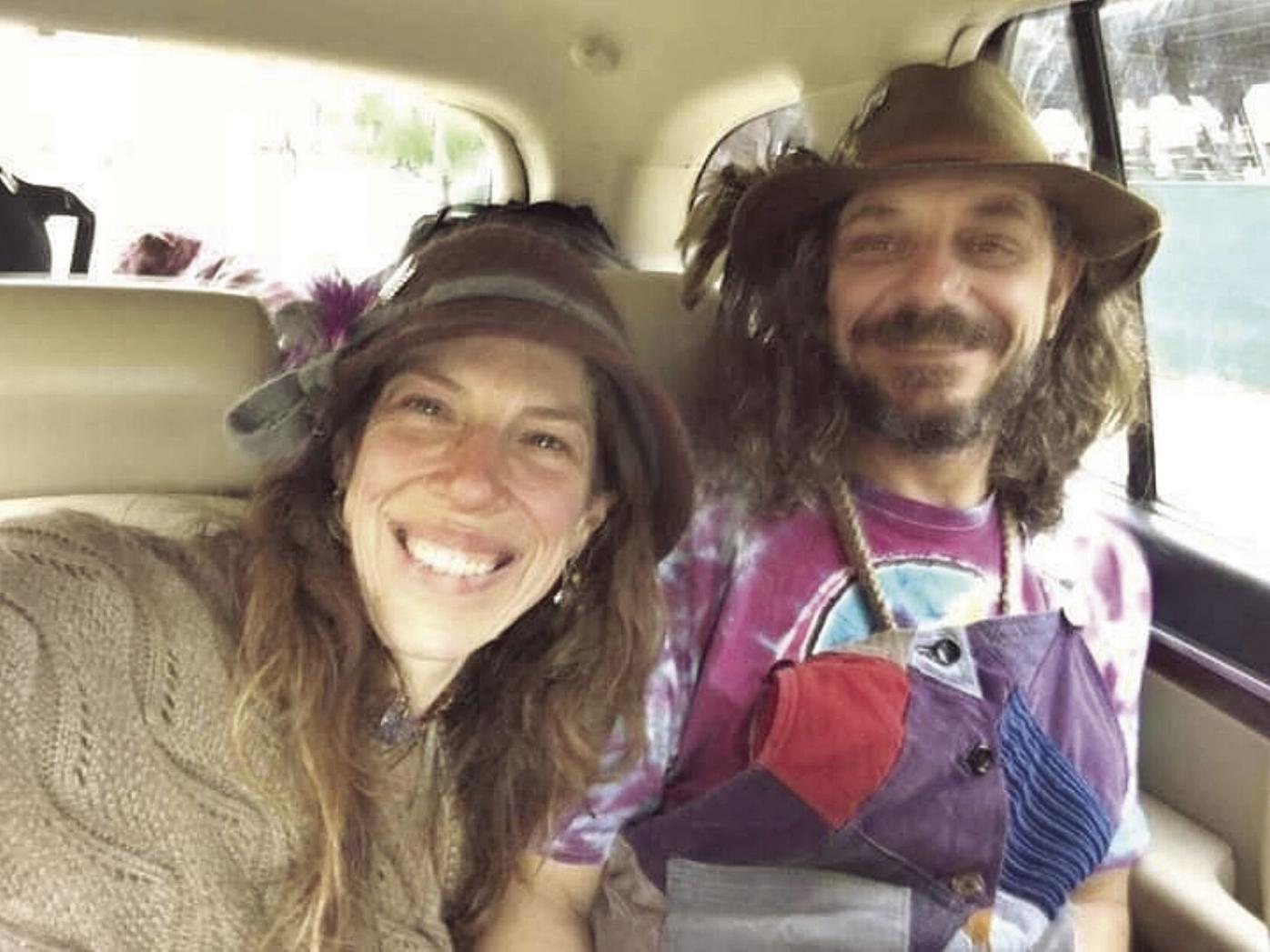 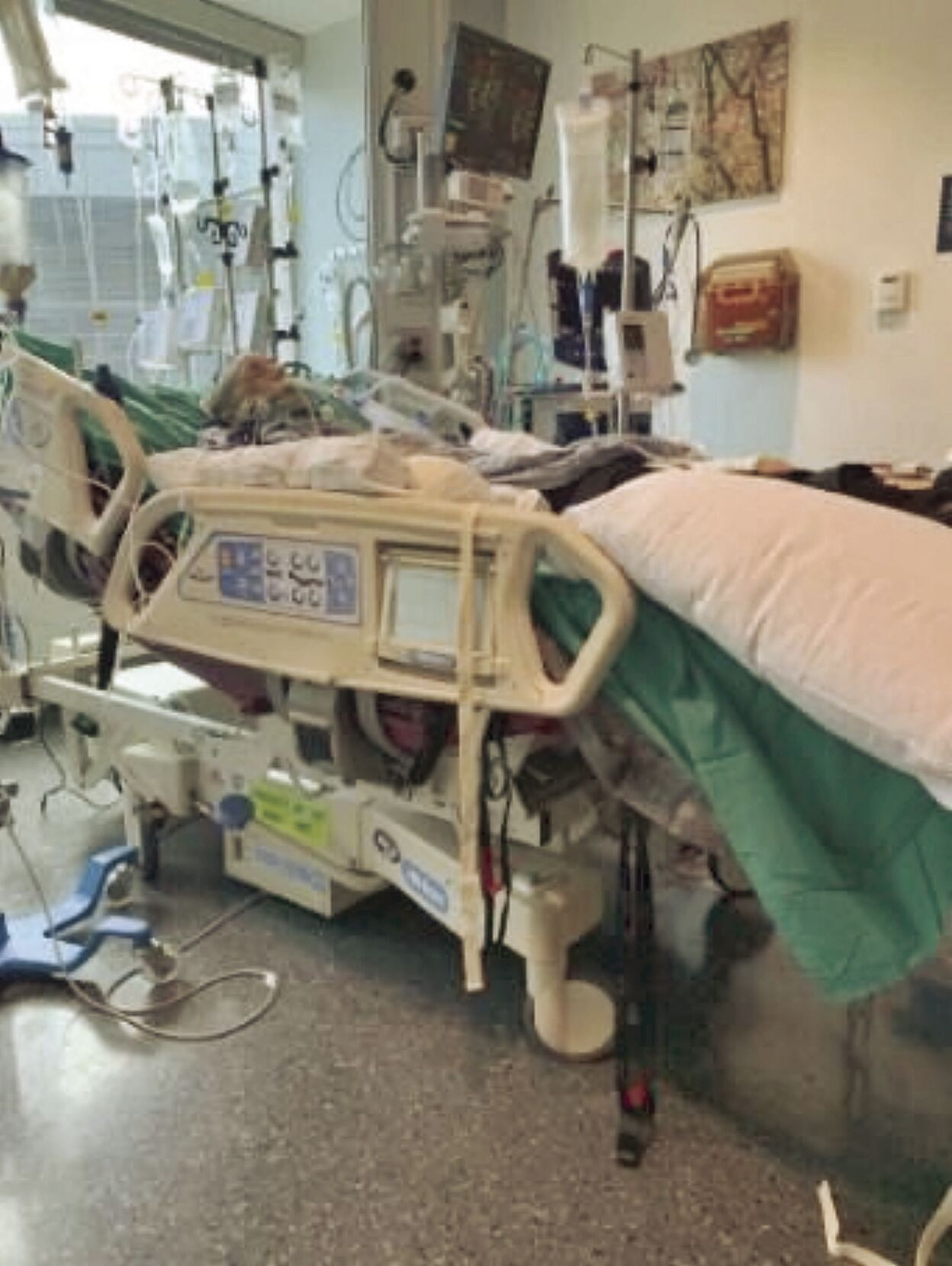 Allison Chambliss-Postmus hospitalized after suffering burns and injuries from a house fire. 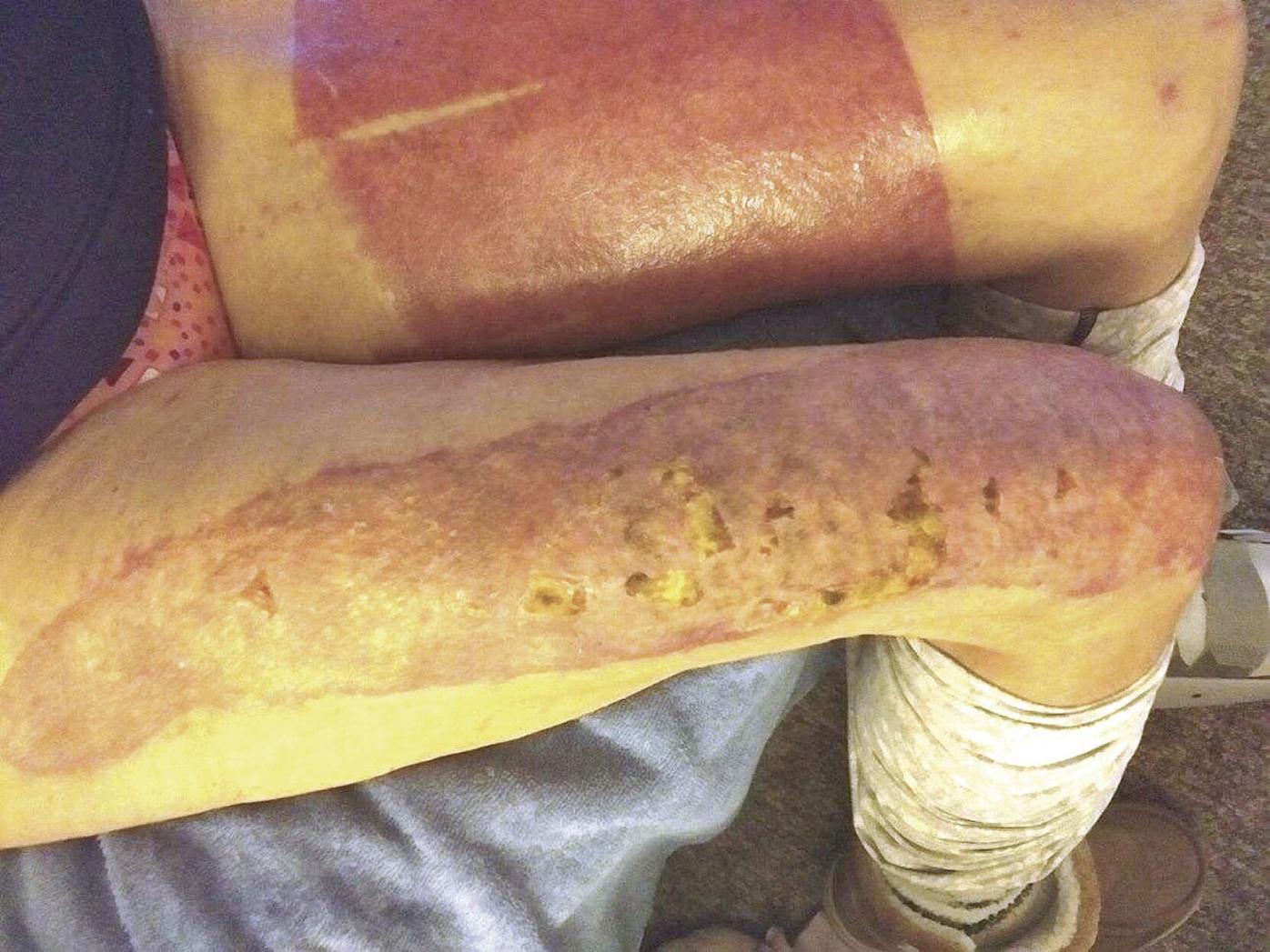 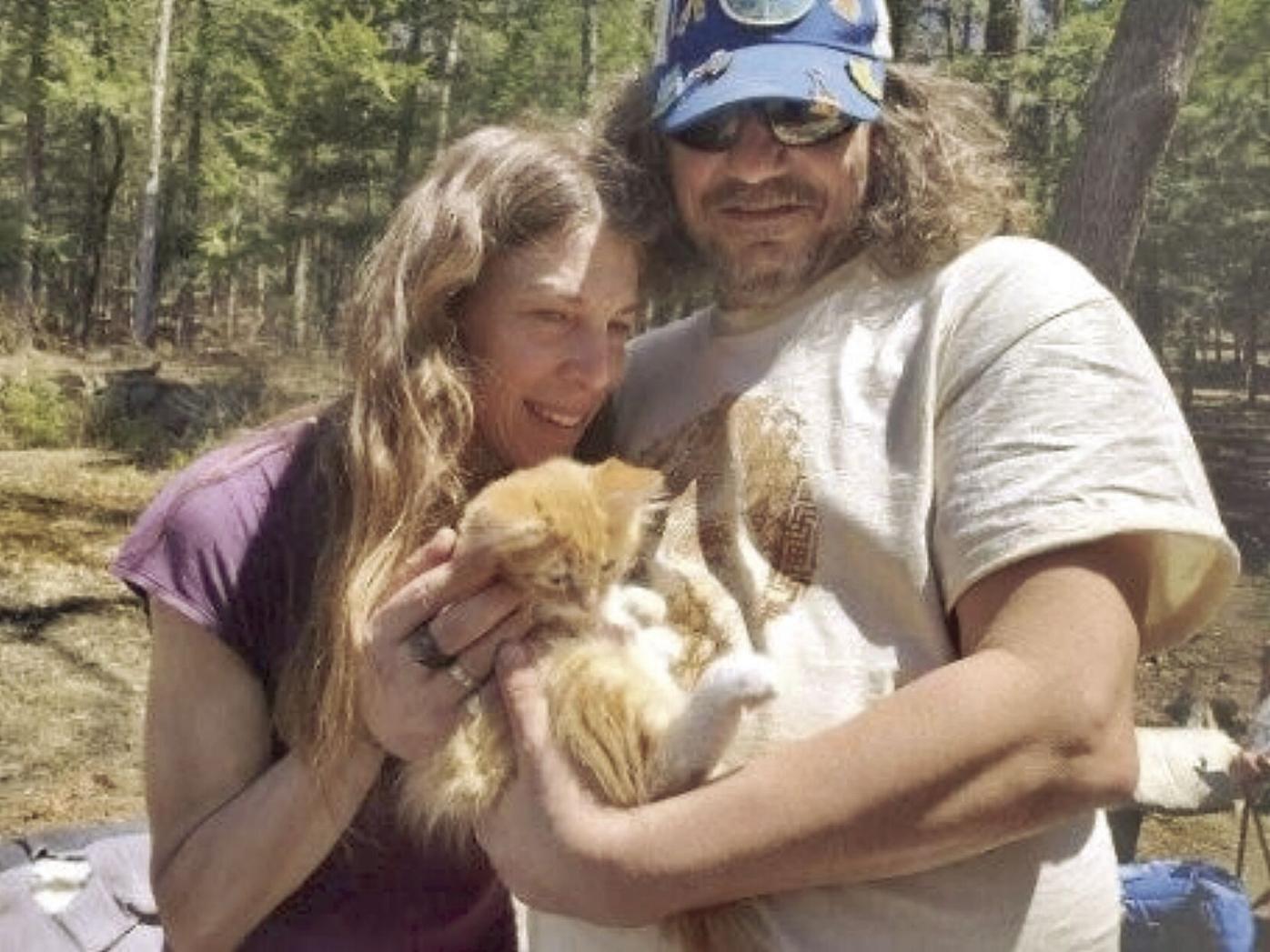 Allison Chambliss-Postmus and her husband Michael Postmus with their cat. 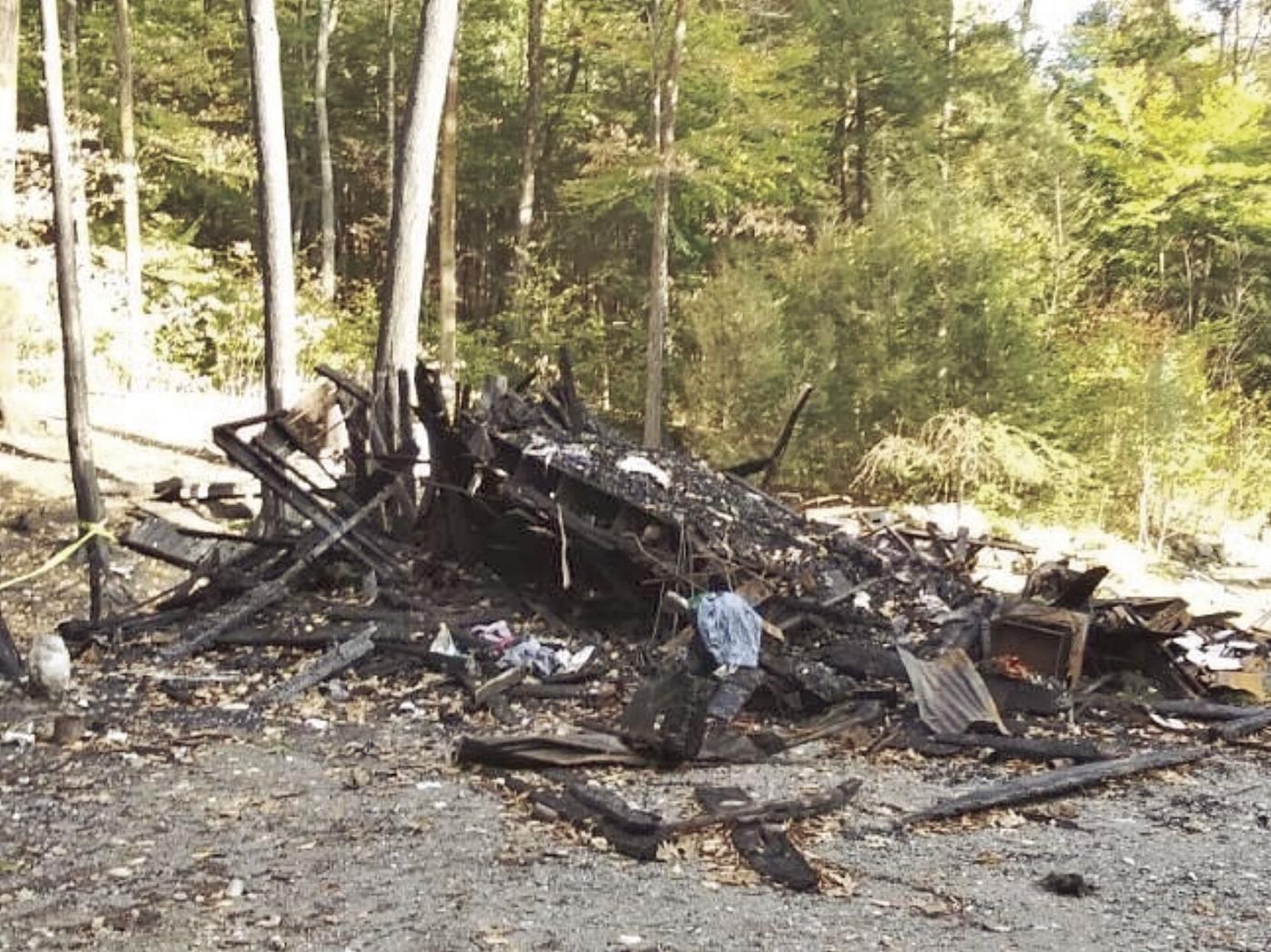 The remains of the Guilford home.

Allison Chambliss-Postmus hospitalized after suffering burns and injuries from a house fire.

Allison Chambliss-Postmus and her husband Michael Postmus with their cat.

The remains of the Guilford home.

GUILFORD — Allison Chambliss-Postmus survived a fire in her silo-shaped home and what she called a “four-story leap of faith.”

“It’s amazing what focus one gets when they’re faced with their own survival,” she said. “I did not intend at that moment to perish.”

Her husband, Michael Postmus, died from injuries and burns. The tragic incident occurred the morning of Sept. 7 during a weekend celebration at their property at 219 Hamilton Road in Guilford.

Chambliss-Postmus said the Labor Day event was meant to bring together “a rich community” she’s part of that includes “musicians, music lovers, healers and other locally and globally conscious beings.”

The couple participated in the jam band scene. They were known to attend Grateful Dead and Phish shows. They were volunteer coordinators for several major festivals in the United States, said Chambliss-Postmus, who would help with family camp events, and artistic and healing pursuits. She’s also a massage therapist.

Just before the COVID-19 pandemic hit, Chambliss-Postmus experienced health issues. She said she had postoperative difficulties after a hernia repair.

The couple had financial difficulties stemming from their inability to work, which Chambliss-Postmus attributed to her health issues and her husband’s mental health issues. She said they were getting food and medical benefits through the state, and both were in the process of trying to get disability insurance.

“When COVID became the new reality for our family as well as the country,” she said, “it put a particular state of stress and despair on our family.”

Their income depended on tours, festivals and large gatherings, which were all being canceled. They also were unable to obtain unemployment benefits, Chambliss-Postmus said.

Her business is called Kindred Folk Promotions. Chambliss-Postmus said during the shutdown, the couple was trying to take advantage of the free time to create Kindred Folk Farm on their 5-acre property in Guilford modeled after Kingdom Promotions, a Christian nonprofit they worked for based in Kansas that takes in people seeking respite. She described how the couple always wanted to help people through transitional phases of their lives.

They hosted four events this year, with the first being a fundraiser on May 22 and 23 aimed at creating a nonprofit. Chambliss-Postmus said about $1,500 was raised and about 50 people attended.

Next came a two-day “garden party” over July 4 weekend. Chambliss-Postmus estimated about 40 people showed up with shovels, plantings and seeds.

A third event near the end of July celebrated the couple’s sixth wedding anniversary. They renewed their vows in “a beautiful starlit ceremony,” Chambliss-Postmus said, calling it “magnificent and loving.”

“However,” she said, “between these gatherings of gratitude, there were periods of intensifying signs and symptomology of his deterioration mentally, emotionally and physically, resulting in two incidents of intervention.”

One incident in June involved both Chambliss-Postmus and her husband voluntarily staying at the Brattleboro Retreat in Brattleboro. She said he received detox and mental health services, she was treated for trauma, and both were getting continued care afterwards.

“Things were looking up,” she said, noting that both of them were in therapy.

They planned their fourth event, a fundraiser for Labor Day weekend. Chambliss-Postmus said the two-day celebration would include music, camping, and creative arts and healing.

“It was absolutely COVID conscious; each participant had to mandatorily sign a waiver,” she said, explaining that general liability forms were filled out by every attendee at the events, with their donations documented and placed in a special fund for the nonprofit.

By her count, about 60 people attended the event. She recalled her husband starting to display “highly erratic behavior and an extreme shift in his personality. It was uncharacteristically extreme to the degree that he was being combative. He was expressing thoughts of self harm and harm to others.”

Chambliss-Postmus said her husband was under the influence of alcohol and substances. His mental health issues were intensifying during the pandemic, she said, but on the night of the fire he could not be calmed or helped.

“And in that state, he locked himself in our home with myself on the top floor and barred access to entry,” she said.

Chambliss-Postmus recalled hearing things breaking and crashing downstairs where Postmus was, with five minutes between their interaction ending and her beginning to smell smoke. She said she called out for her husband and he emerged from the third floor, “fully injured in a state of utter shock.” She recalled when she asked him what they were going to do, Postmus said, “I don’t know but you will figure that out,” before he jumped from the fourth floor with no preparation.

“At that time,” she said, “I was already experiencing the intensity of the heat, of the fire, of the backdraft and realized I had mere moments, if not seconds, to decide my fate.”

Chambliss-Postmus said she became aware some guests were running or driving away from the house out of concern for their safety while others were coming toward the house, urging her to jump and saying that they would catch her. She demonstrated how she “sucked into my yogic self” and began lowering herself from the fourth floor deck, which is about 40 feet from the ground. She said being a snowboarder, yogi and experienced meditator helped prepare her for the jump. She attributed burns on her hands to holding on to the decking as the fire quickly engulfed the structure.

Before jumping, Chambliss-Postmus said, she made contact with her catcher before giving him a countdown. She credited him with preventing the impact from injuring her more.

Her injuries included eight shattered bones in her left ankle, a simple fracture in a long bone on her right foot, a compression fracture in her vertebra and a rotator cuff strain. She suffered burns to both her legs, hands and wrists, her right shoulder, left buttock and the top of her head.

One of the guests drove the couple to Brattleboro Memorial Hospital. They were airlifted to Massachusetts General Hospital and placed in intensive care.

Chambliss-Postmus said she was intubated for two-and-a-half weeks, treated for pneumonia and received surgical grafting for injuries.

“Due to the severity of Michael’s injuries, he was given a 30 to 40 percent chance of recovering just from the burns he sustained,” she said. “His body was not responding well. His organs were shutting down and he had two cardiac arrests while intubated.”

Postmus’ family opted for a do-not-resuscitate order. He died Sept. 15.

With Chambliss-Postmus not awake, “it was hard to make that decision,” said Amy Cahalan, Postmus’ sister. “When we did take him off life support, he was around family and friends.”

Chambliss-Postmus woke up two days later. She said her daughter, Casey Hagedorn, told her about the death of her husband and two dogs who were in the house.

Getting out of the hospital after 10 days in the intensive care unit, Chambliss-Postmus returned to Brattleboro to begin rehabilitation. She said she found herself “homeless but not helpless.”

“The support and love of the community was immediate and overwhelmingly beautiful,” she said.

She said the American Red Cross provided immediate access to funds for shelter and replacing eyewear. The organization also gave her money for a memorial service for Postmus.

Also assisting Chambliss-Postmus is Health Care & Rehabilitation Services, Vermont Department of Children and Families, and Groundworks Collaborative. Latchis Hotel is giving her a reduced rate on a room.

“The community at large set up a food chain for feeding me on a day-to-day basis for one month,” she said. “And Vermont Medicaid, to date, has taken care of every single expense that has been incurred alongside this tragedy. There is also a team of close family members who will be helping with the house site clean up and retrieval of any personal effects.”

A private memorial service for Postmus was planned for Saturday, Oct. 17 and included a community potluck meal. Any donations will be going to any living and medical expenses needed for Chambliss-Postmus. She said she had no homeowner insurance due to an inability to pay during the pandemic and her husband didn’t have a life insurance policy in place when he died.

Hagedorn set up a fundraiser at gofundme.com/f/wzp9hn-support-for-my-mother. As of Sunday morning, more than $27,800 was donated.

Noting her awareness of the memorial service happening a night earlier, Cahalan said the grieving for her brother is still going going on.

“It’s probably more difficult because we weren’t really able to say goodbye to the Mike we all knew,” she said.

Chambliss-Postmus encourages people to learn from her tragedy.

“Tell your friends, if you see an extreme mental health change that is significant and ongoing and increasing in severity, do not delay,” she said. “Please take those signs and symptoms seriously and engage and activate your friends and family members to prevent such a tragic and unnecessary result to what was formerly a beautiful and rich life.”