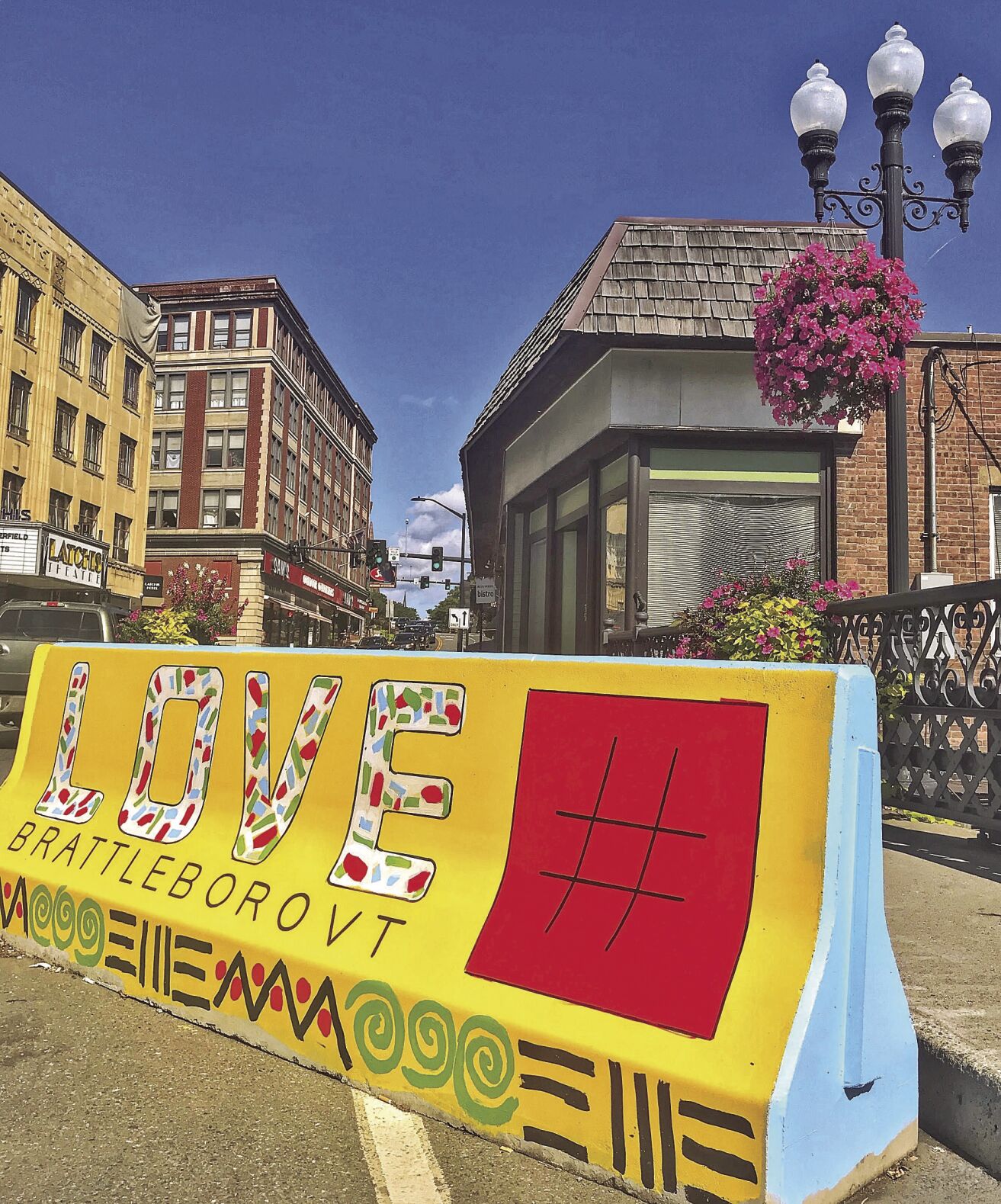 Supporters of the Love Brattleboro campaign painted a logo on the parklet in front of Blue Moose Bistro on Main Street. 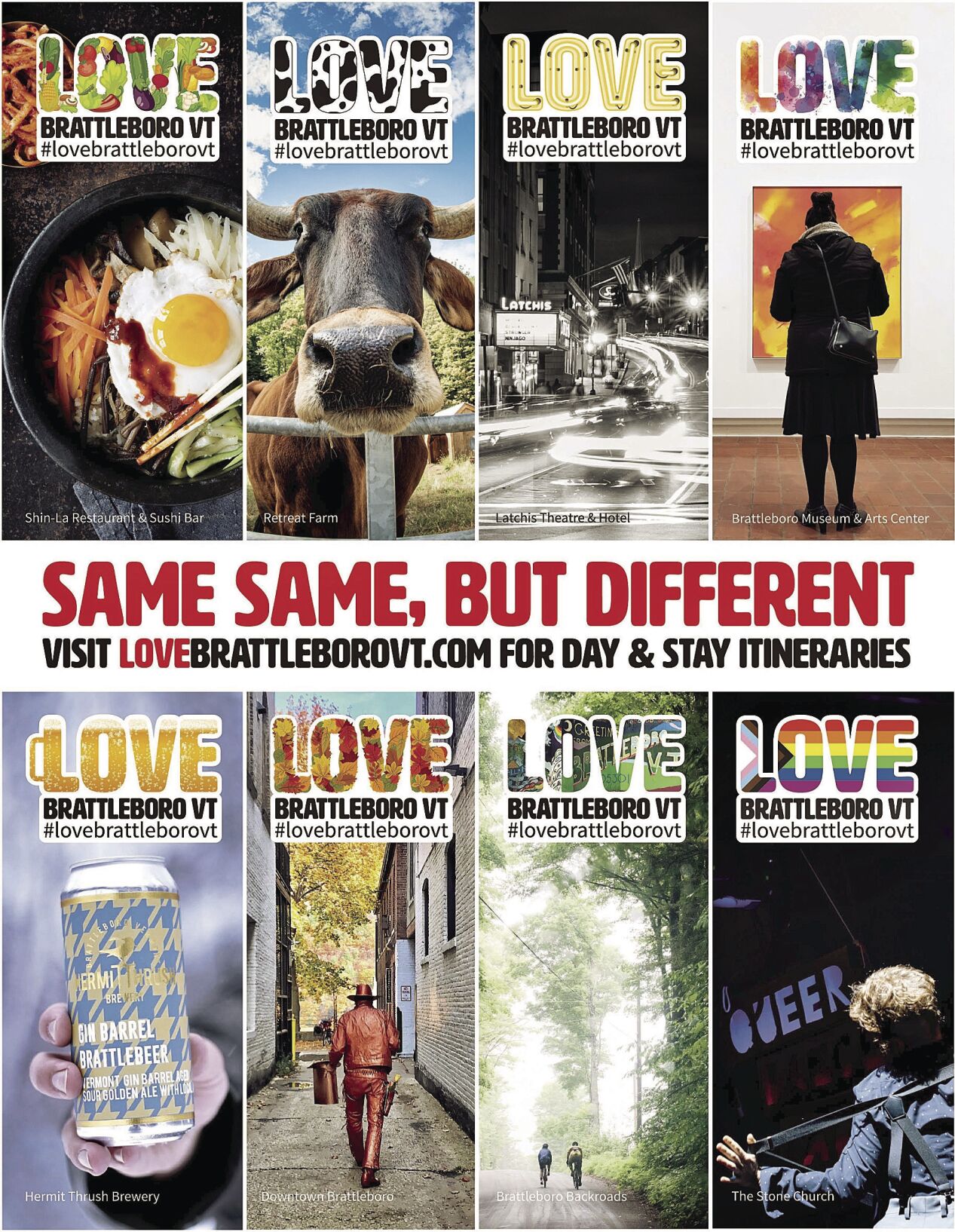 One of the latest print ads created by Penniless Projects was placed 10,000 times in Seven Days to a targeted audience.

Supporters of the Love Brattleboro campaign painted a logo on the parklet in front of Blue Moose Bistro on Main Street.

One of the latest print ads created by Penniless Projects was placed 10,000 times in Seven Days to a targeted audience.

BRATTLEBORO — As the Brattleboro Area Chamber of Commerce and Downtown Brattleboro Alliance prepare for a second phase of their community marketing initiative after a successful foray, the firm they hired is leaving the project.

Penniless Projects of South Newfane decided not to renew the contract, DBA Executive Director Stephanie Bonin told the Select Board during a meeting held remotely Tuesday.

“Unfortunately, some tools that we have found to be critical to achieve success of the campaign particularly in the complex COVID era, have been, at the request of the DBA and Chamber, removed from the marketing mix,” Daimian Lix of Penniless Projects said in an email response to the Reformer. “Without the ability to fully use these basic marketing tools, we feel that the success of the campaign will be deeply compromised. While we are currently unable to contribute to the overall strategy of the campaign under these circumstances, we have offered to continue to provide graphics for the campaign and to support the effort in any way that we can.”

Penniless Projects wrote to the Select Board, “It is with extensive consideration and not a small amount of sadness that we feel that we must now step back from the campaign. It has become apparent to us in strategizing the next phase of the campaign with our partners, that the DBA and Chamber have a clear vision for how the campaign should be executed.”

The initiative is aimed at getting more visitors to town.

“We accomplished this mission with a very tight timeline and interrupted timeline,” Bonin said.

The project rolled out in January and paused from March to June due to COVID-19. Ads were purchased in print publications such as The Advocate, Rainbow Times, Seven Days, Fugues and Yankee Magazine. Digital ads ran in the same publications online plus VTDigger and Vermont Public Radio.

Targeted audiences included those who could travel to town for a day or a weekend and the LGTBQIA+ community within driving distance. Based on public health concerns and state guidelines, a revised campaign from June to October focused on getting Vermonters to visit Brattleboro.

Success was based on the number of views and clicks an ad received. For instance, a newsletter from Yankee Magazine was opened 52,665 times and received 2,256 clicks.

Bonin said the ad linking directly to the campaign’s website at lovebrattleborovt.com performed best of all the ads in the newsletter — it garnered 339 clicks. She credited the images for attracting visitors to the site

In a Rainbow Times e-blast, 13,320 people saw the images and the ad had 892 clicks. Bonin described that being part of the high “click-through rate” the campaign enjoyed when compared to industry norms.

“Again,” she said, “great job to Penniless Projects in making people want to look further into our message.”

Bonin said 20 percent of the posts on the campaign’s Facebook page involved artists, business owners and other community members who are Black, indigenous or people of color.

Representative Town Meeting approved $42,119 for the project last year. About $3,400 is left, said Kate O’Connor, executive director of the chamber.

“We’ve kept to the budget that you folks approved all that time ago,” she said. “We’ll continue our advertising ... to focus on the Vermont market.”

Penniless Projects was paid $22,000 to develop images and ads, and place the ads. As of the meeting, ad spending totaled about $12,500.

A photo contest on Instagram provided $100 gift certificates to 10 people.

“So we got $1,000 directly into the Brattleboro retail establishments,” O’Connor said.

At the end of the update, Board Vice Chairwoman Elizabeth McLoughlin brought up the letter from Lix and asked about the campaign’s “new direction.”

“We’re working on phase two,” O’Connor said. “We’re going to continue Love Brattleboro. Nothing’s going to change with the imagery or anything.”

Her group and the DBA will continue leading the project and working with a steering committee. O’Connor said they are talking about target audiences once the pandemic is over.

“We’re really not changing a lot,” she said. “We haven’t hired anyone for the second phase of the campaign.”

The hope is to come before the Select Board next month to discuss the next phase. This year, Representative Town Meeting approved $43,748 for the project.

Board Chairman Tim Wessel applauded the groups for navigating current public health guidelines in Vermont, calling it “an impossible marketing situation to be in.”

Board member Ian Goodnow suggested marketing Brattleboro as a wedding destination as there could be a pent-up demand after the pandemic. He also wondered if merchandising could be part of the next phase.