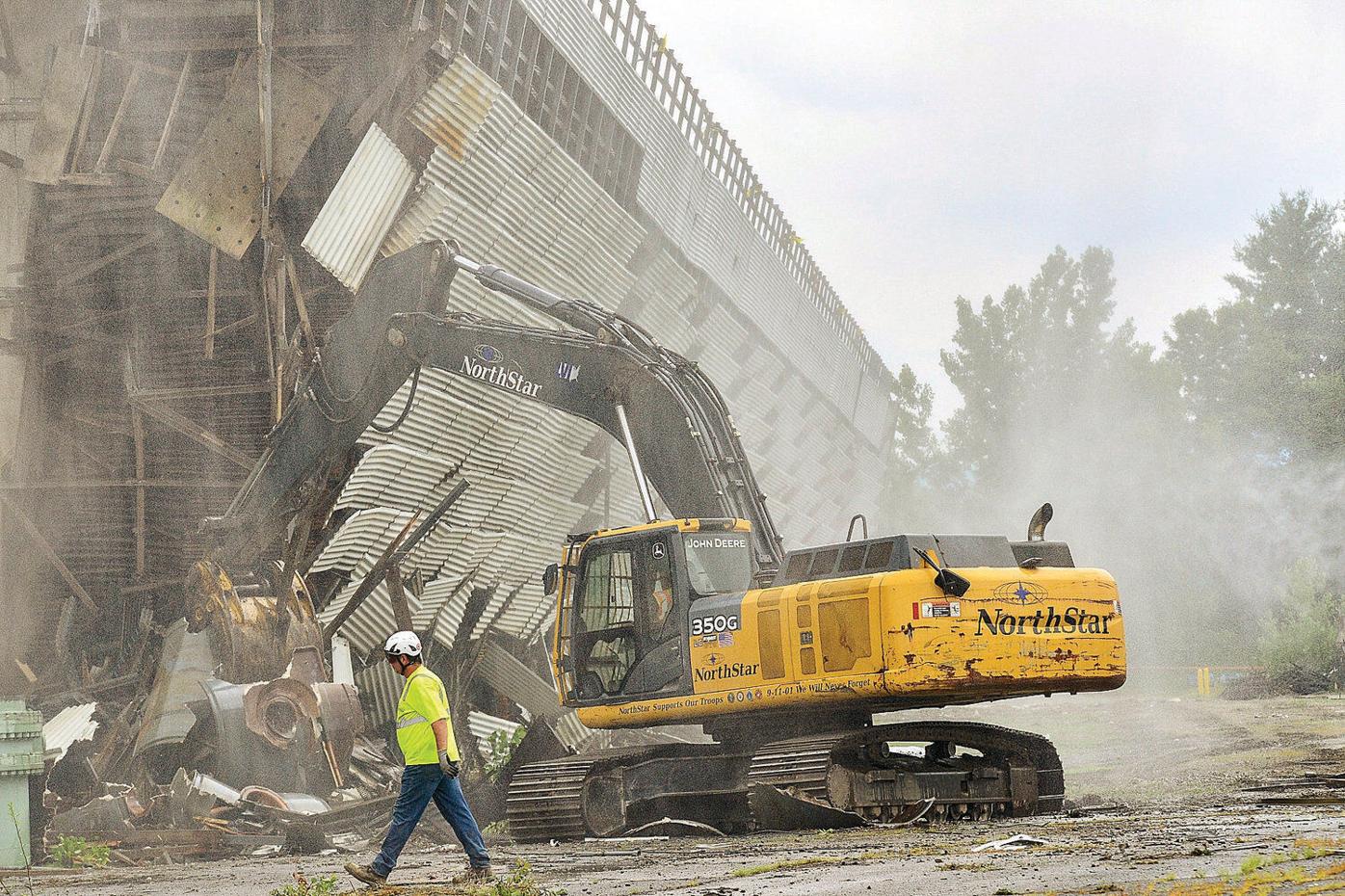 Demolition begins on the east cooling towers at the Vermont Yankee Nuclear Power Plant, in Vernon, on Thursday. The plant was shut down on Dec. 29, 2014. 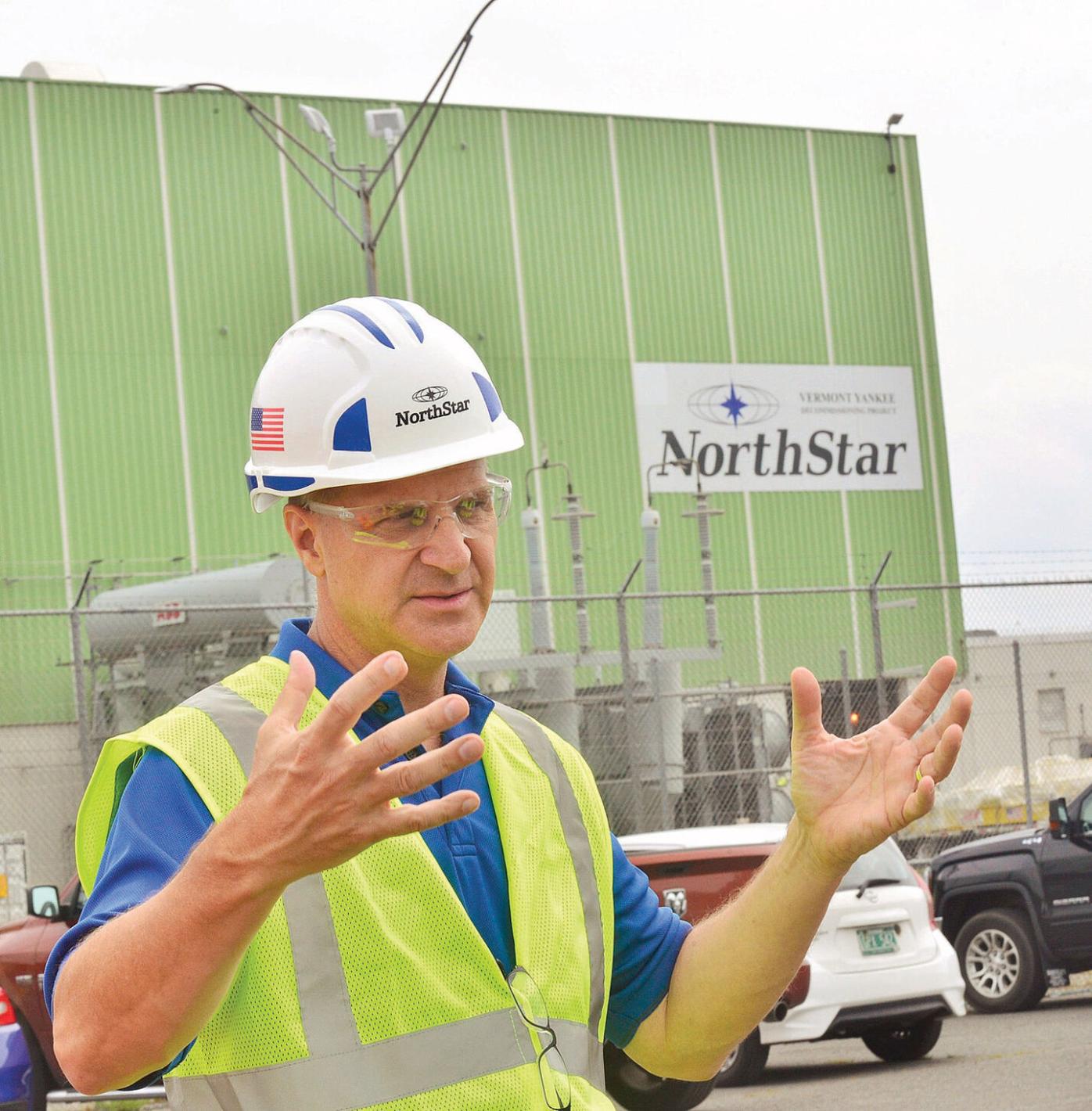 Demolition begins on the east cooling towers at the Vermont Yankee Nuclear Power Plant, in Vernon, on Thursday. The plant was shut down on Dec. 29, 2014.

VERNON — Demolition crews from NorthStar Nuclear Decommissioning made short work Thursday of Vermont Yankee's east cooling tower, and the New York City industrial demolition company said during a tour of the site that it was at least six months ahead of schedule in the plant's decommissioning.

Under the watchful eye of NorthStar Chief Executive Officer Scott State, excavator crews started the demolition of the cooling towers shortly after noon. Working in tandem, two large excavators attacked the east tower. Both towers were originally made of rot-resistant Douglas fir and redwood, while the rebuilt west tower, which had partially collapsed in 2007, was reinforced with fiberglass.

After 2 p.m., crews didn't even have to continue to spray water on the demolition to control dust from the debris, as a series of thunderstorms moved through the area.

One excavator operator, who was a member of the specialty crew brought in from NorthStar's office in Boston, expertly wielded a large steel pipe, which used to carry Connecticut River water into the cooling towers, as a battering ram against the buildings. The second or west cooling tower, was expected to come down on Friday, according to NorthStar spokesman Corey Daniels.

Minor amounts of asbestos had been removed earlier, Daniels said.

Massive amounts of river water - 366,000 gallons per minute - were piped through the cooling towers while the nuclear plant was at full operation during the summer months.

State, the top executive at NorthStar Nuclear Decommissioning Company LLC, said the company was six months ahead of schedule for the exterior work at the Vernon site, but he said it was too soon to say whether the interior work of cutting up the reactor internals, an 18-month job, was ahead of schedule.

"We're working from the outside in," State said, referring to the early demolition of outside buildings and structures, while the crews methodically work toward the reactor building, which holds the most radioactive contamination.

NorthStar's partner in the project, Orano, a French company, is handling the demolition of the reactor's internals: cutting them up under water for eventual shipment to the west Texas low-level radioactive waste site run by Waste Control Specialists, in a partnership with Orano USA.

NorthStar is a large demolition company, and currently is demolishing a 70-story tower that housed JP Morgan Chase at 270 Park Avenue in Manhattan, State said. The skyscraper, which is 700 feet tall, was about 50 years old but was antiquated and not easily adapted to modern corporate needs. He said the demolition was technically more challenging than the non-nuclear side of the Vermont Yankee demolition, since the building sits on top of the Metro-North tracks.

State said one of the first things the company did at Vermont Yankee was upgrade the rail access serving the site, since much of the waste will be shipped out by rail.

David Pearson of NorthStar said that work was progressing so well - NorthStar took over the Vernon site in January when the purchase from Entergy Nuclear was completed - that the cooling tower demolition was moved up from 2020.

A small group of NorthStar officials and reporters and photographers watched as the large excavators attacked the bank of cooling towers. Each bank was divided into 11 cells or bays, and were 462 feet long and 42 feet tall, each topped with a 14-foot fan stack with a 200-horsepower motor.

The cooling towers helped keep the boiling-water reactor cool during the warm weather months, when the temperature of the Connecticut River rose, making cooling more difficult. The cooling towers functioned as an air-cooled radiator for the plant, according to Daniels, the senior manager for the independent spent fuel storage installation. The debris from the cooling tower demolition will be sorted and then ground up and taken away to a construction debris dump, Pearson said.

The concrete foundation of the cooling towers will also be ground up but used for fill at the Yankee site, but only after it is tested for possible contamination, State said.

Concrete from the power-producing side of the power plant will not be used as fill for the clean-up effort.

State said the demolition of Vermont Yankee is slated to be completed by 2030, which is decades ahead of the schedule established by Entergy Nuclear. NorthStar said it could do the nuclear demolition quicker and cheaper, and won both state and federal approval for the Vermont project.

State said he hopes the Vermont Yankee project will be completed by 2026.

"It's bittersweet for sure," said Vernon Select Board Josh Unruh, who watched the tower demolition along with Michelle Pong, Vernon's town administrator.

But Unruh said it was also a sign of progress that the Yankee site would be ready for redevelopment much sooner than originally thought. (Unruh is an employee of New England Newspapers, the parent of the Brattleboro Reformer.)

Vernon residents hope the 140-acre site, except for the spent fuel storage facility which contains 58 giant concrete and steel casks taht hold the 42 years of spent nuclear fuel from Vermont Yankee, can be redeveloped once the demolition and clean up is finished and site restoration completed. Vermont Yankee shut down in December 2014.