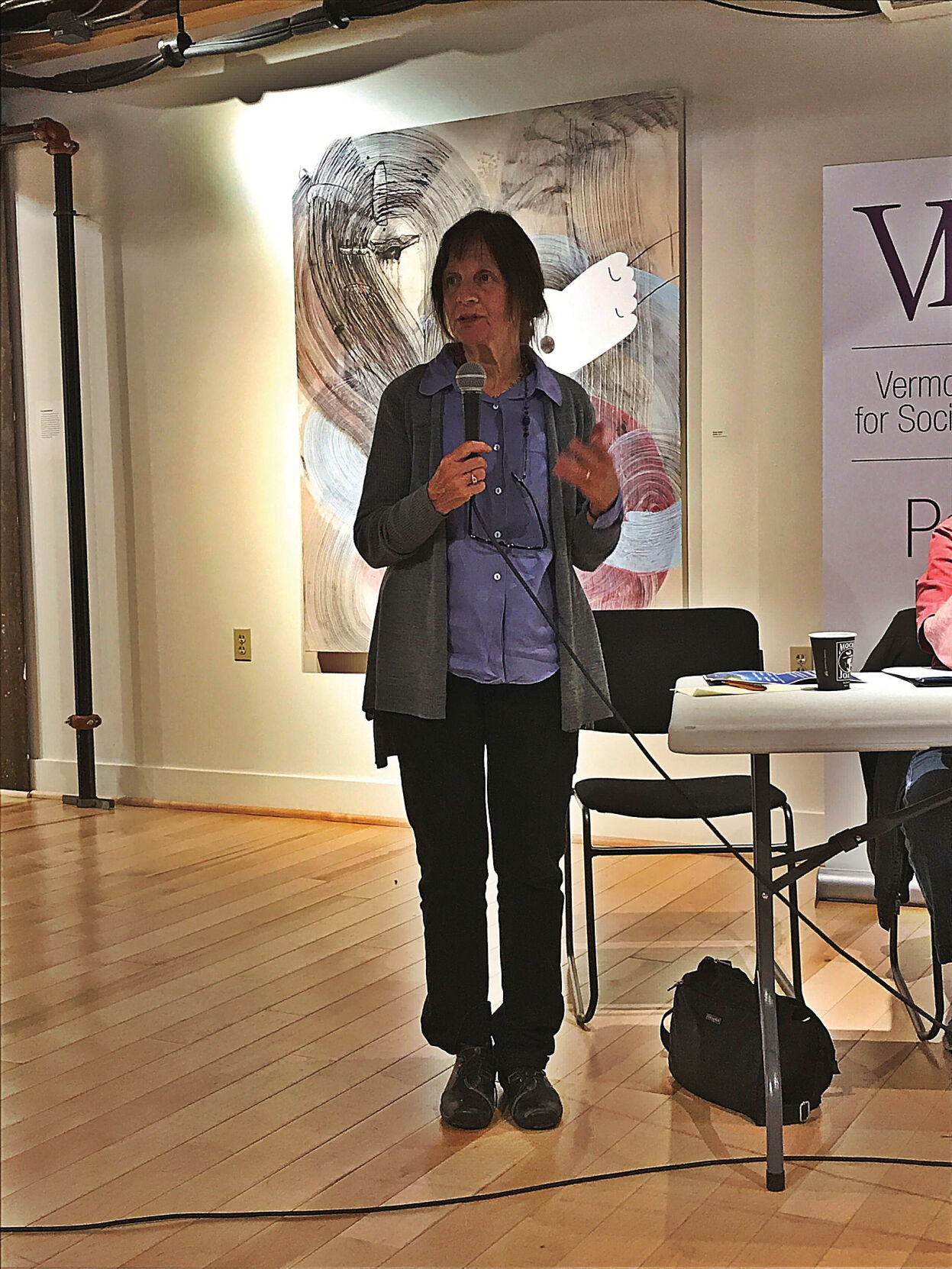 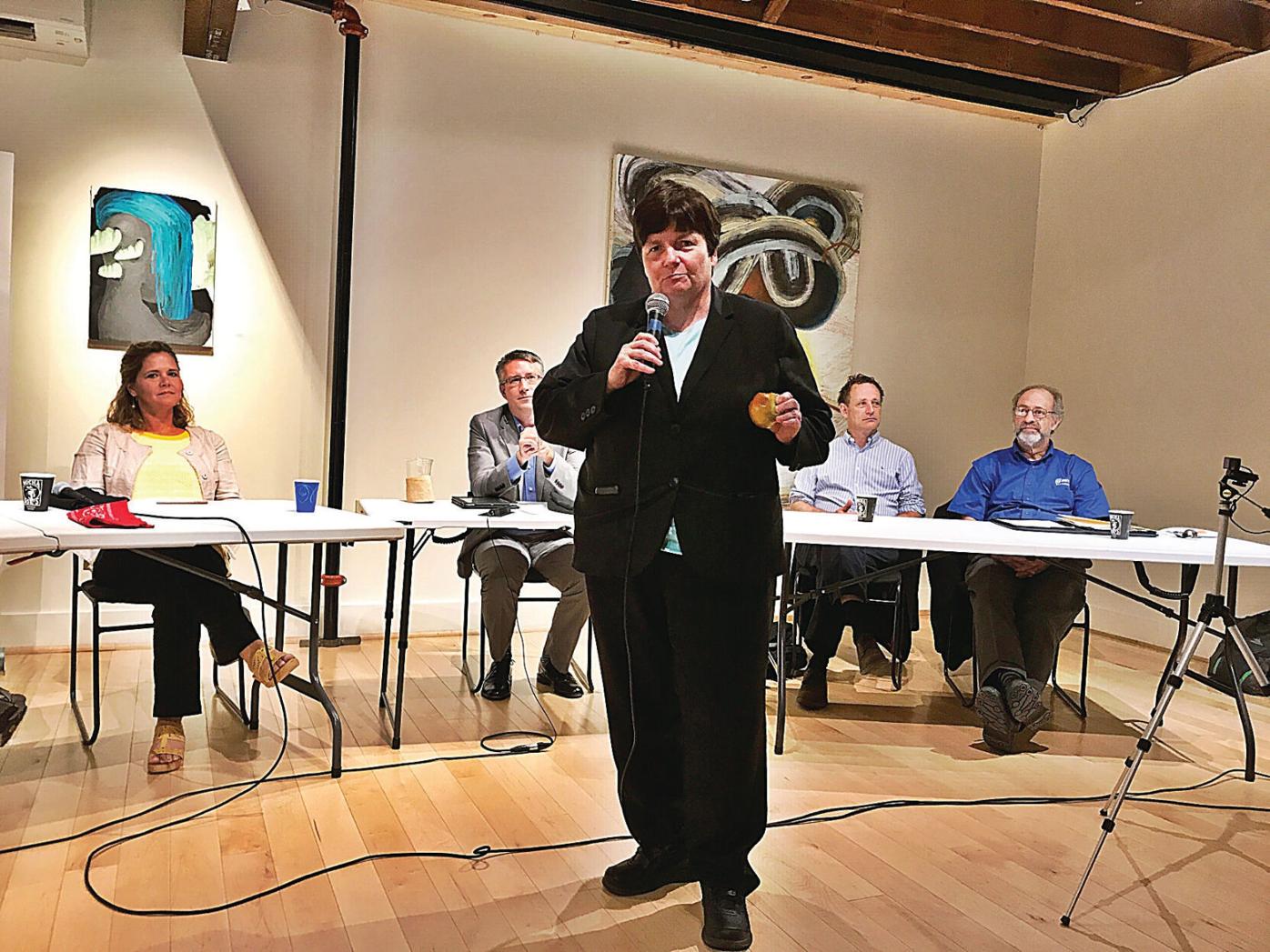 Vermont State Treasurer Beth Pearce addresses the crowd at a forum on Tuesday. 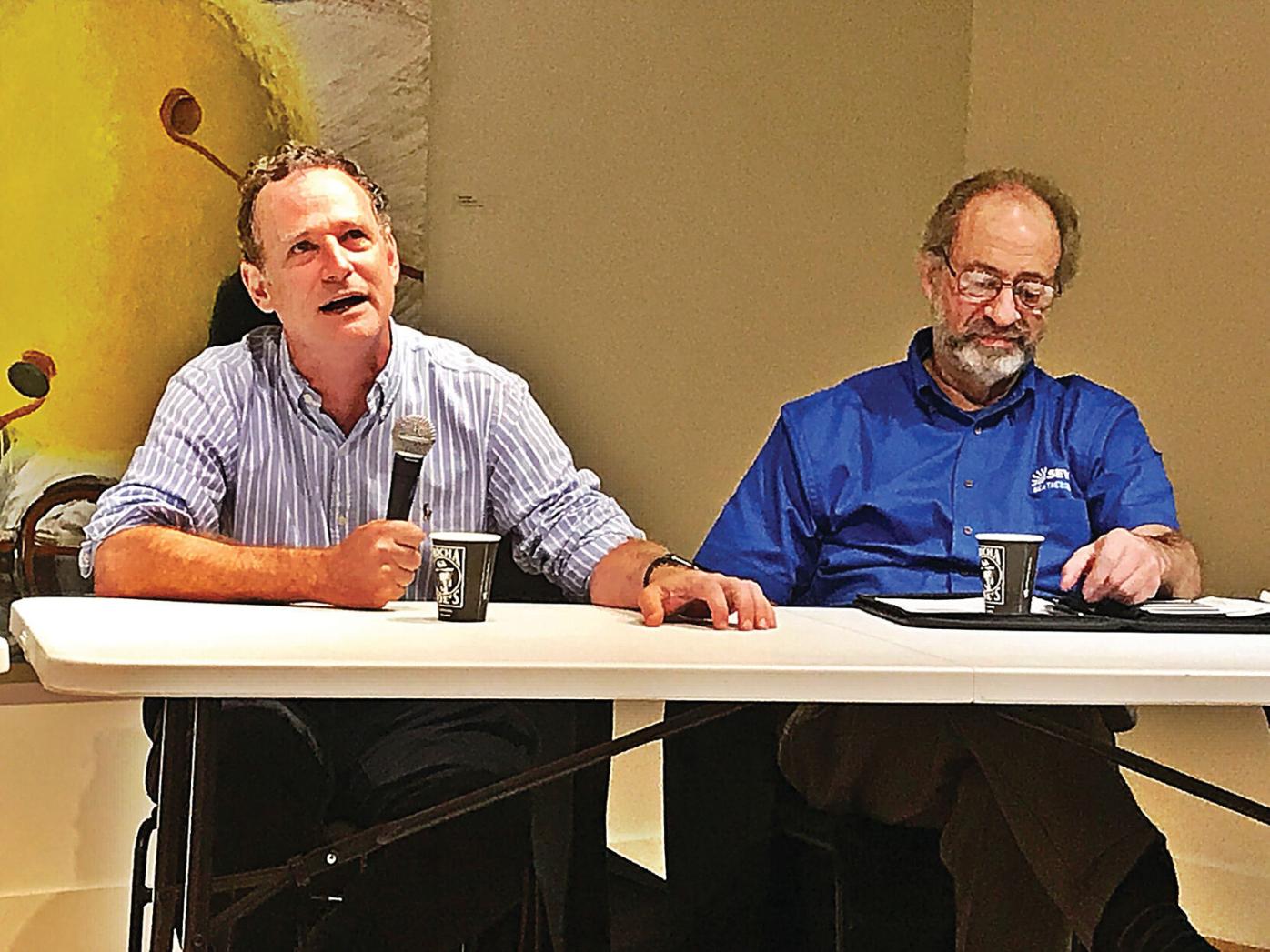 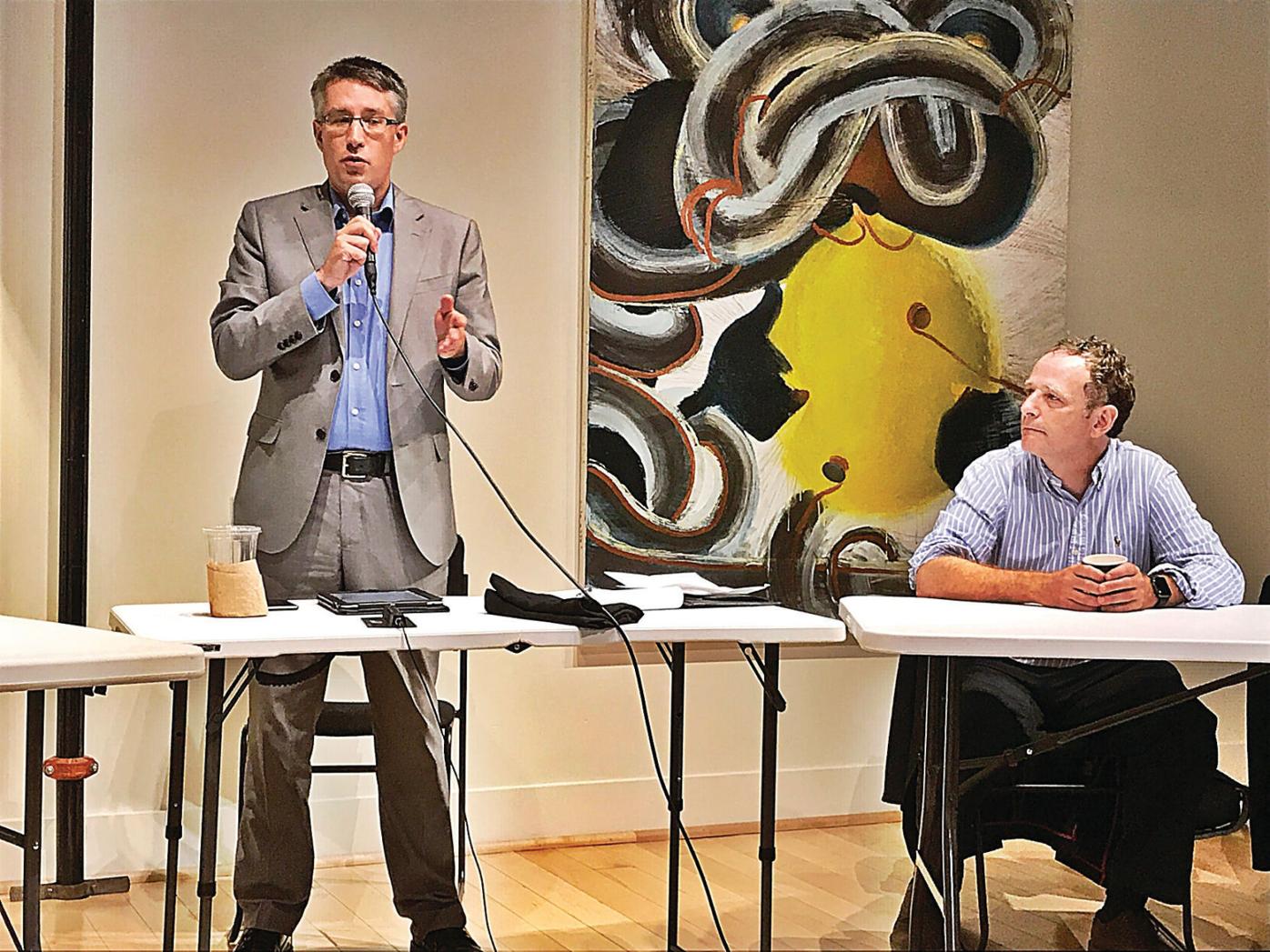 Vermont State Treasurer Beth Pearce addresses the crowd at a forum on Tuesday.

"We're in a very strange time, I think," the founder and CEO of the Brattleboro-based Green River Software said as a panel member at a forum Tuesday. "When I grew up and went into the environmental field, I envisioned business as the source of the problem."

"Businesses are actually pulling us forward," he said. "Now it's time for our state government to seize an opportunity that has sort of been left behind for us. It's, let's get carbon policy right in this state."

Knapp believes that will only inspire more companies to make Vermont home. He pointed to recent growth in the "green building" sector taking place in the region.

Dan Barlow, public policy manager for Vermont Businesses for Social Responsibility, saw the forum at 118 Elliot St. as a chance to talk about the "climate economy" and another way to get more Vermonters involved in that line of thinking. Not only are environmentally minded initiatives about morality and future generations, he said, but they can also present economic opportunities. He plans to bring input back to his staff and to the Statehouse in Montpelier, where he works as a lobbyist.

One in 16 working Vermonters has a job in the clean energy sector, according to Barlow.

"It is one of the fastest growing sectors here in Vermont," he said, crediting "smart and capable" legislators with assisting via policies. "There are other states that are far behind us."

Rep. Mollie Burke, P/D Windham 2-2, said the state has already seized on "low hanging fruit" such as a Park and Ride, which created safe places for people to leave their vehicles so they could carpool. The challenge now, she said, is cutting emissions from transportation. She has introduced bills on carbon taxing and cap-and-trade incentives.

"It's been a very hot political issue," she said.

Johanna Miller, energy program director at Vermont Natural Resources Council, said the new federal administration "has essentially abdicated our responsibility on climate." But Vermont Gov. Phil Scott's new Climate Action Commission is looked at as a way to continue with plans set forth in the Paris Climate Accord - which President Donald Trump wants the United States to leave - as well as energy goals established for the state.

"I want to stress the word action, which will include everyone in this room," Miller said. "The challenge is that we all have to be influencing that conversation. We all have to be working as citizens in our local communities, with our regional planning commissions, with our legislators, to turn this challenge into opportunity."

"We believe, as the entities that serve that population, that the broad goals of reducing our carbon footprint and strategies such as carbon pricing and carbon-pollution tax serve the long term and future needs and interest of people with lower incomes for a number of reasons," Geller said. "Like everyone else on Earth, they'll be profoundly affected by the negative impacts of climate change."

"One of the problems is that low-income households are almost never able to take advantage of the latest, most effective approaches to reduce the energy use and cutting their costs, such as high-efficiency furnaces, renewable technologies, electric or hybrid vehicles, etc. because they don't have the money to invest in them, to pay the upfront costs or see any benefit from the tax credits when they're offered," Geller said. "So low-income Vermont residents, while they want to be part of the longer term solution to our carbon footprint and climate change, will also feel the worst impacts from some of the strategies to remedy that unless the potentially regressive effects of those strategies are adequately mitigated by a number of things related to discounts or rebates."

Making initiatives affordable or income sensitive and having rebates or tax credits come immediately or sooner, rather than annually, would be helpful, according to Geller. Carbon pricing or taxing policies would need to be reviewed to see their effect on poorer populations.

Offering solar panel ownership opportunities to lower income families is an area being explored by Geller's group. That would reduce power bills.

State Rep. Sarah Copeland-Hanzas, D-Orange-2, called Cash for Clunkers "a tremendous opportunity for folks to trade in less efficient vehicles for more efficient vehicles." The program plus some quick math inspired her to buy a car that didn't cost so much to fuel.

"It was one of the things that left us feeling very vulnerable," she said.

Copeland-Hanzas wants lawmakers to find more incentives for families and businesses to switch to cleaner energy sources. "Because by and large, we have the ability to generate clean energy close to home," she said.

State Rep. David Deen, D-Windham-4, said he has been trying to get a fee or tax applied to carbon emission for four years now. He has been working on the issue with a group with representation from New England states and New York.

"Vermont does not have to go it alone," he said.

On behalf of his friends hit by the storms in Florida, Deen asked attendees to donate to the Red Cross and the Diaper Fund.

Before the forum ended, State Treasurer Beth Pearce spoke briefly about the state's commitment to addressing the issues discussed.

"We want to to work together," she said. "It's all about partnership."

The governor's Climate Action Commission has four public meetings coming up, including Oct. 5 in Brattleboro at the Marlboro College Graduate School Room 2-E and Sept. 21 in Manchester at Burr and Burton Academy's Hunter Seminar Room. Meetings are scheduled to go from 6 to 8 p.m.