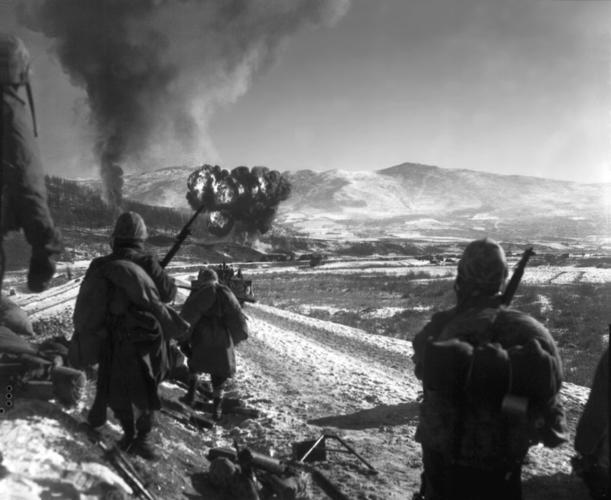 U.S. Marines move forward after close-air support flushes out the enemy from hillside trenches on Dec. 26, 1950. Billows of smoke rise from the target areas. 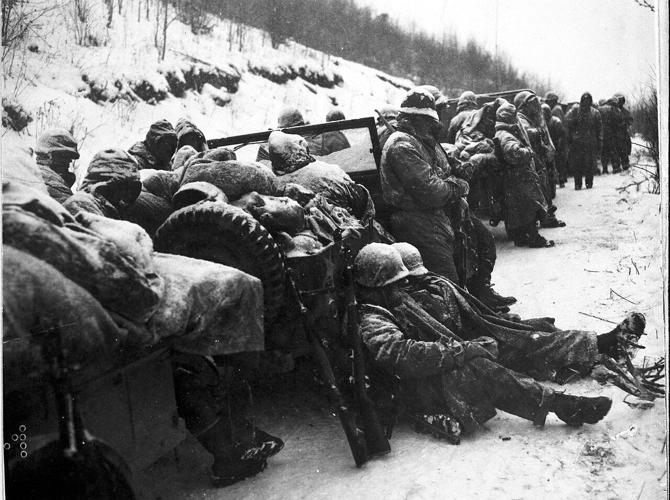 Marines fought back 15 miles through Chinese troops, where they organized for the epic 40-mile fight down mountain trails to the sea. 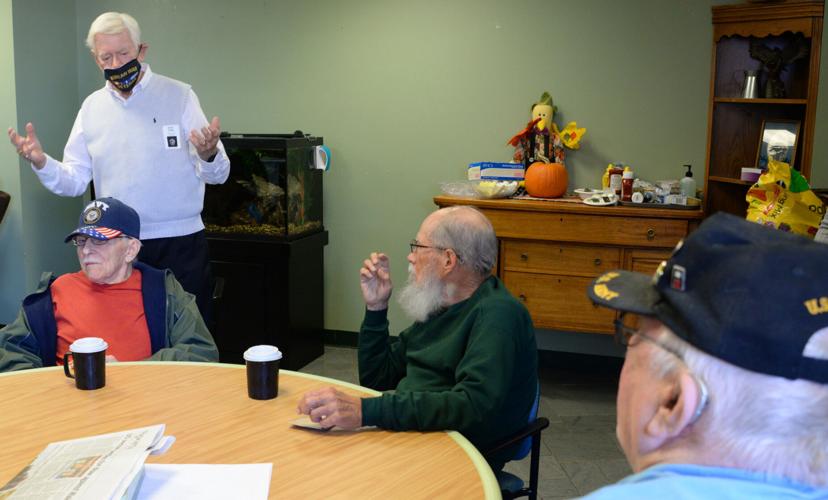 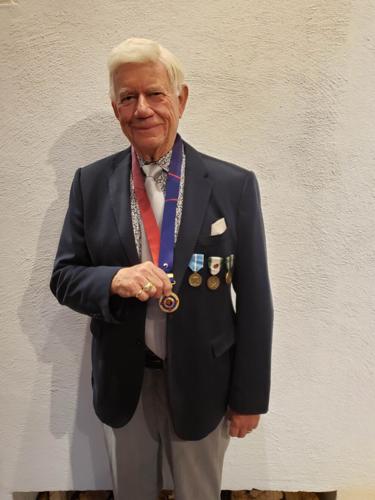 Al Feldan stands with with Korean Ambassador of Peace Medal awarded to him by the South Korean government during his visit to the country nearly 70 years after his service in the war. 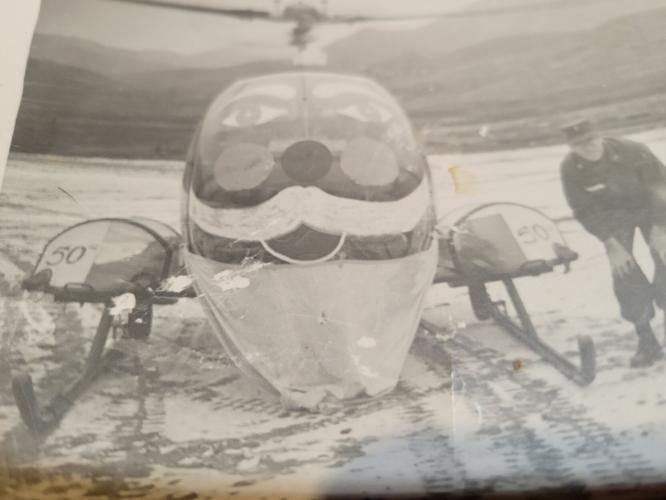 First Lt. Al Feldan, U.S. Army, standing next to a helicopter during his time in Korea.

U.S. Marines move forward after close-air support flushes out the enemy from hillside trenches on Dec. 26, 1950. Billows of smoke rise from the target areas.

Marines fought back 15 miles through Chinese troops, where they organized for the epic 40-mile fight down mountain trails to the sea.

Al Feldan stands with with Korean Ambassador of Peace Medal awarded to him by the South Korean government during his visit to the country nearly 70 years after his service in the war.

First Lt. Al Feldan, U.S. Army, standing next to a helicopter during his time in Korea.

BENNINGTON — It might have taken almost seven decades, but 90-year-old Korean War veteran Al Feldan, of Bondville, is doing everything he can to make sure Americans, and veterans themselves, know the value of those who have served in the nation’s armed forces.

Feldan was at the Vermont Veterans' Home on Tuesday, visiting a group of about 10 veterans, exchanging introductions, talking about when and where they’d served, and eventually reminiscing and exchanging stories about the “good old days.”

“People don’t realize that freedom isn’t free. We guys had to fight for that freedom,” Feldan said passionately to the group that included several other Korean War veterans. “When people do things for you guys, it’s their duty. No charity here. It’s duty.”

Feldan, like so many Americans, left the Korean War in the rearview mirror a long time ago. Being a veteran of the war himself, Feldan had his own reasons to keep the memories locked away, even from his wife and children. He considers himself “lucky,” having been deployed to the front shortly after the armistice of July 27, 1953, that ended major hostilities.

Still, Feldan witnessed much of the aftermath of the war that killed about 1 million South Korean civilians and almost 40,000 U.S. troops. He was commissioned as a first lieutenant and sent to command an artillery battery of the 7th Infantry Division.

Feldan arrived in a unit that had been through one of the bloodiest battles of not only the Korean War, but in all of modern warfare, at Chosin Reservoir. Of the original 238 men from that unit, only 24 survived, by Feldan’s estimation.

Armistice or not, Feldan was still there at a time of a very uneasy peace while the two sides negotiated an agreement that would never come. Both sides were still harassing each other and infiltrating across the 2-mile-wide demilitarized zone that still exists there today, and China’s entry into the war had taken the United Nations by surprise several years earlier, so the highest vigilance was still required during U.N. peacekeeping operations.

Even offered a promotion and a promising start to a military career upon returning home after 18 months in Korea, Feldan was determined to move on to civilian life.

“When I left Korea, I said I never want to see this place again,” Feldan said. "I don’t want anything to do with the Army; I want out.”

Feldan managed to hold to that for almost 70 years. But life has a funny way of bringing you back sometimes. Three years ago, Feldan was contacted by Honor Flight, a nonprofit program that celebrates veterans by paying their way for trips to Washington, D.C., where they can view the monuments to the wars they served in, amid a great deal of fanfare.

The trip was an important first step in helping Feldan reconnect with his military roots. He was moved by so many people coming out in support of veterans.

Spurred by that positive experience, Feldan took another step that he never imagined he would take. He accepted an invitation from the South Korean government to be flown there as part of the “Revisit Korea” program, where he was awarded the Ambassador for Peace Medal, given as thanks to representatives from U.N. countries that defended South Korea during the war or participated in the peacekeeping mission until 1955.

Being wined and dined in the presence of heads of state of high-ranking generals was eye-opening enough, but the part of the trip that affeccted him most was still to come.

“They took me to the position I was in during the war … And as soon as I saw that, everything came back to me, about the people dying in the streets,” he recounted. “I didn’t feel so good.”

Thankfully, the revisit program was ready for this and had mental health professionals there to help. Feldan’s unpleasant memories, however, were strongly contrasted by what he saw in present-day Korea.

“They were taking me around on a paved road, a multilane highway. When I was there [in the 1950s], it was only dirt roads. There was nothing, even in Seoul,” he explained. “So, I started thinking, ‘Boy, this country is really doing good.'  It’s a gorgeous country. It was beautiful. I couldn’t believe what I was seeing.”

Between the heaps of gratitude from the Korean people, and seeing firsthand the prosperity of the nation he had helped escape the clutches of communism, Feldan’s entire view of his role in the war began to change.

“I come back to the United States, and I say, ‘You know, I’ve been all wrong.’ We really did something over. We … we did freedom. We did something really great.”

“So now I’m going to do what I can to make up for it by getting active in veterans affairs,” he continued. “It was this whole transformation just from being a deadbeat who didn’t want anything to do with the services to saying, 'Hey, I really did something, and we did something.’”

The transformation is noticeable not only in his words, but in the Korean War veteran baseball cap he proudly dons. Feldan’s cycle of disengagement from the military and service only to rediscover his roots isn’t an uncommon cycle for veterans. Also like many veterans, Feldan downplays his own time in uniform to a degree, but is intent on raising awareness and appreciation for those he served with, and those that have come after him.

Feldan has stuck to that resolution to become more involved. His Tuesday visit to the Vermont Veterans' Home was not his first, and he has spoken at several recent events in the area on behalf of veterans, including at the Israel Congregation of Manchester and in Rutland for a “Vets Town Hall,” an event where all are welcome to attend, but veterans are given up to 10 minutes to speak to what service has meant to them in a comfortable environment of fellow veterans.

Feldan isn’t sure exactly how Korea got lost in the mix of recognition for America’s wars, but speculates that it’s a combination of things. That war closely followed a war of massive scale, World War II. Also, attitudes toward the Korean War just weren’t particularly strong in one direction or another, perhaps because the prevailing narrative was that it was a “police action” or a “limited war,” thus making it less memorable to those who weren’t involved.

“People weren’t against this action as much as they were against what [the troops] went through in Vietnam or even Afghanistan,” he said. “The country was sort of neutral, but nobody was really saying thanks, either. And I think, after time goes by, people are going to realize what Korea was, what Vietnam was, Afghanistan was and why we were there.”

Feldan’s focus is far from just the veterans of the conflict he was a part of. He wants to make sure there is appreciation and respect paid to all service members, past and present.

There is one more anecdote from Feldan’s recent trip to Korea that seems to have resonated with him. While he was there, he had plenty of time to converse with the Maj. Gen. Xavier T. Brunson, commander of the 7th Infantry Division, Feldan’s old unit.

And as long as there are veterans, Al Feldan will be there to honor them. Fortunately, Feldan said it seems like more people share his mindset.

“I go up the road, and I see the Korean War Veterans Memorial on Route 7, or I go out to eat some place wearing my veteran hat, and they say, ‘The meal’s on us,’ or I go to the supermarket, and they give me flowers. So I’m beginning to say to myself, ‘You know, maybe people are beginning to get it.’”

If you know a Korean War veteran, they can learn how to apply for the "Revisit Korea" program at kwmf.org/revisit-korea-program. The Korean Ambassador for Peace Medal (can be awarded posthumously) application is also available at dva.wa.gov/veterans-their-families/veterans-benefits/korean-war-ambassador-peace-medal.

Tory Rich can be reached at trich@manchesterjournal.com