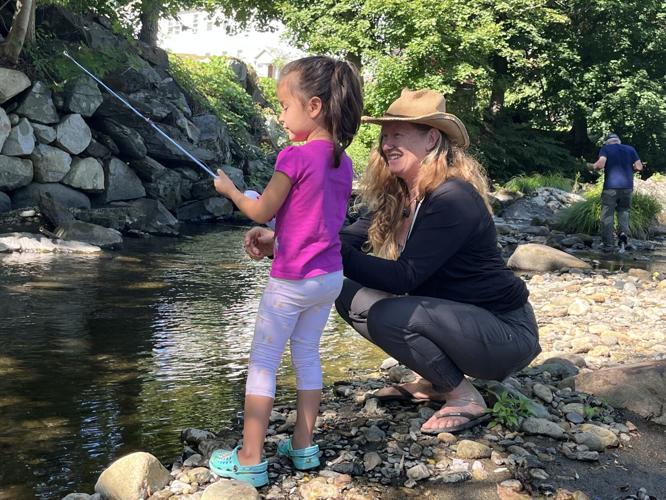 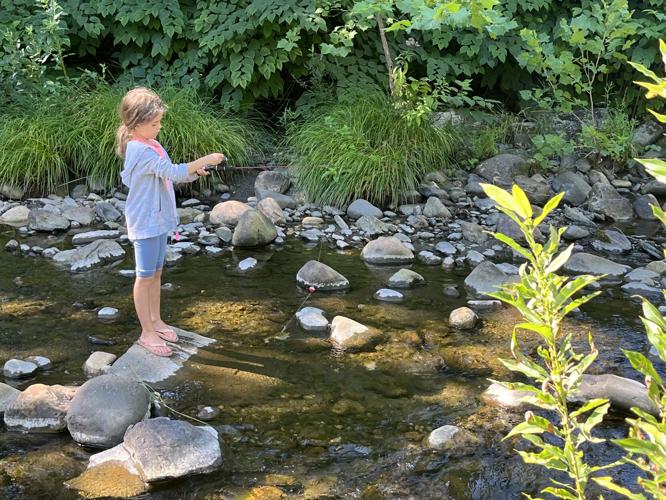 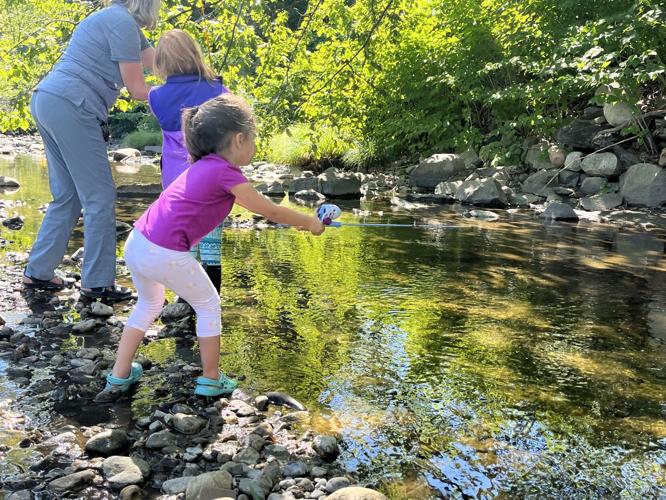 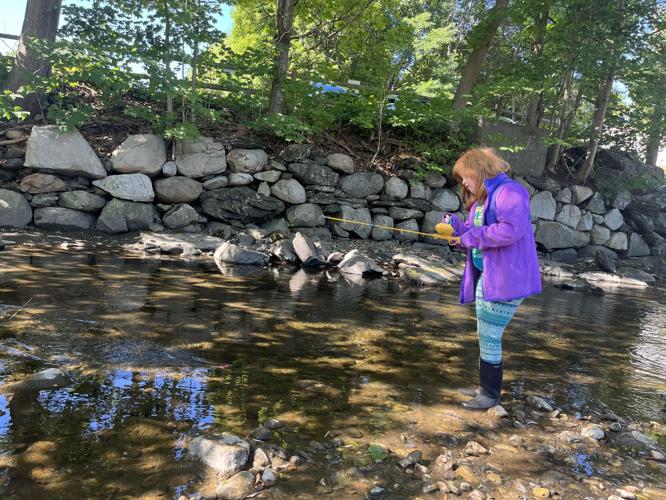 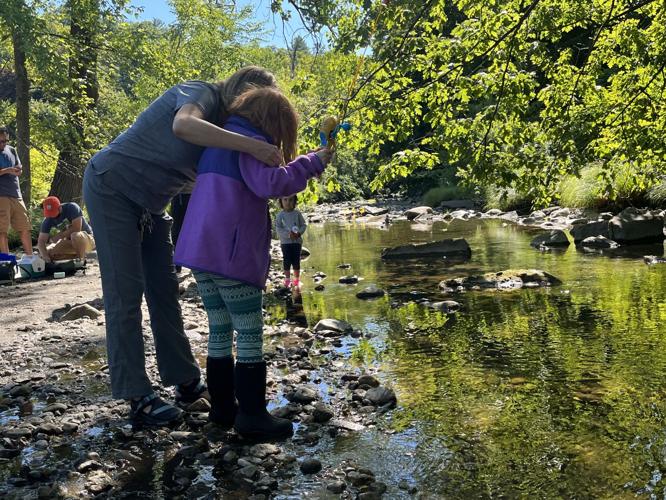 “This is creating an invitation for everyone to come fishing here,” said Erin Maile O’Keefe, a partner in the local Water Way(s) program.

Attendees learned about the abundance of trout in the brook and impacts of climate change on fish populations. They also received fishing tips.

“This is fun to do as a family,” said Jill Terrell-Ouazzani of Dartmouth, Mass.

Her daughters, 3 and 7, were fishing for their first time and picking up facts about waterways. The older one had been asking to go fishing for years.

After their successful outing, Terrell-Ouazzani said she thinks the next step is to get fishing poles and licenses. The family previously lived in Brattleboro for seven years.

Urffer said a series of events is planned to bring people to the brook to educate and raise awareness. Lael Will, fisheries biologist for the Vermont Department of Fish and Wildlife, will run a catch and release fishing demonstration from 10 a.m. to noon Friday at the spot. Attendees will be able to see and identify fish in the brook.

Urffer and Maile O’Keefe recently led an educational project, working with fourth and sixth grade classes at Academy School. Now they’re reaching out to community members who live along the brook to help “re-envision our relationship with the brook in general,” Urffer said.

“The brook has a really healthy trout fishery,” she said. “There’s actually reproducing trout in the brook of different ages.”

Because of the healthy fishery, Urffer said the state’s grade in classifying the brook should be higher. She hopes to put forward a petition to increase that grade, a requirement of the state’s classification program.

When the program was set up, Urffer said, every brook had the same grade. If data shows the grade should be higher, a request must be made to do so.

“In general, we have turned our back on our rivers,” Urffer said. “And so people drive up and down Route 9 and are not really aware about this brook that runs along it and then empties into the Connecticut River. So part of our efforts, especially for the folks that live in West Brattleboro, is to just reconnect them to the brook as an asset, as a place you can come and hang out.”

Urffer said the part of the brook where Sunday’s event occurred had flooded residences at Melrose Terrace during Tropical Storm Irene in 2011 and Federal Emergency Management Agency provided funds for projects aimed at relocating those who lived there. She noted the senior housing development was built in the floodplain in the 1960s and flooded repeatedly over the years.

BRATTLEBORO — More than 50 years ago, thousands of yards of fill were trucked in and deposit…

Urffer said BHP also had buildings at Melrose Terrace demolished and the floodplain restored to protect people, enhance the brook and provide storage for floodwaters. The project involved strategizing for climate change and a higher frequency of storms in the future.

“So in my job as river steward, we almost feel like we’re racing time,” Urffer said. “We are trying to get as many possible projects like this done in order to protect people and infrastructure when we have a next big storm. And we will have the next big storm sooner rather than later.”

Dirt was removed from the property in order to lower the land, which Urffer said will allow floodwaters to expand out on the land. She said a culvert was purposefully built to help manage water flow during a flooding event.

When the area is not flooded, Urffer said, it can be used as community space.

Urffer expects a similar project involving a 12-acre parcel owned by the Vermont River Conservancy at 250 Birch St. to be finished by next summer.

WEST BRATTLEBORO — After about four years of planning, a flood mitigation project at a former lumber storage yard is going through the review process needed before excavators dig in. "We're now …

Maile O’Keefe initiated the Water Way(s) project with support from Christine Hart, development director at BHP. Restoration of the floodplain provided “an opportunity to look back and look to our Indigenous elders to talk about how is this land actually intended to be used,” Maile O’Keefe said.

Maile O’Keefe recounted Melrose Terrace being “a beautiful community” with a lot of elderly women who loved their homes and being on the brook.

As part of Water Way(s), she said, students are being taught how to combine modern scientific practice with Indigenous ways and insights when trying to develop solutions for climate change. Information can be found at waterwaysproject.org.