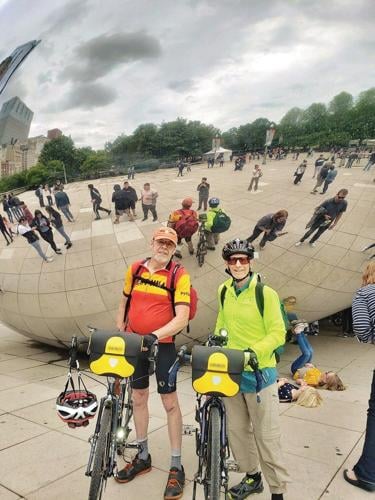 On their way to Seattle to start their cross-country trip, Jim Robinson (left) and Moss Kahler take a break from riding in front of The Bean at Millennium Park in Chicago. 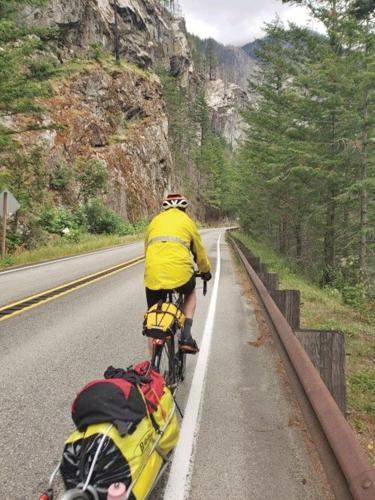 Jim Robinson on the road. 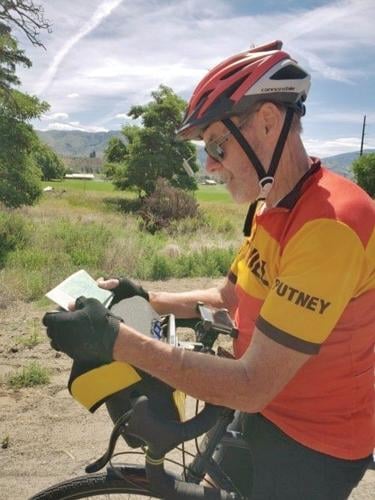 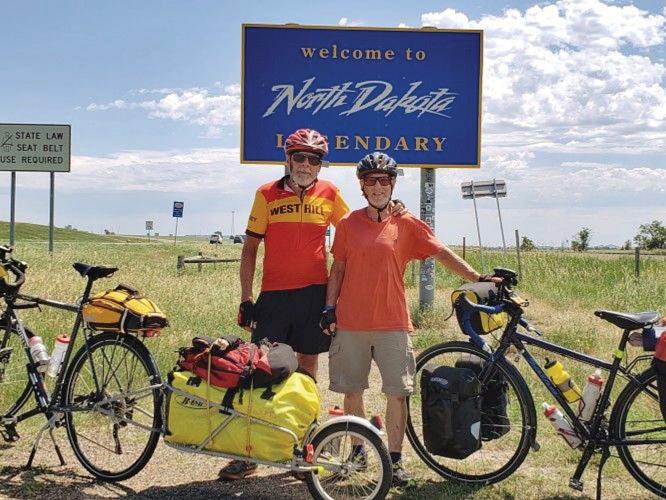 On their way to Seattle to start their cross-country trip, Jim Robinson (left) and Moss Kahler take a break from riding in front of The Bean at Millennium Park in Chicago.

Jim Robinson on the road.

BRATTLEBORO — Moss Kahler, 69, of Brattleboro and Jim Robinson, 70, of Putney are seasoned cyclists, but when they spent 79 days riding their bicycles across the country this summer — carrying about 50 pounds of gear, from sleeping bags and tents to repair kits, electronics and snacks — it really tested their endurance.

"It just all adds up," said Kahler. "So you get stronger from doing it every day. And the hills you go up or the wind you're fighting, you can't help but build stronger legs and I suppose heart and lungs."

From June 12 to Sept. 15, the duo trekked from Bainbridge Island, Wash., to Bar Harbor, Maine. Kahler chronicled their trip through a blog at crazyguyonabike.com/doc/mosskivt.

They averaged about 60 miles per day. Weather conditions and topography played a big role in how far they would travel on a given day.

The daily cost of their trip averaged out to be $39 each or $78 together. Kahler said they quickly tired of ramen noodles and hotdogs.

Robinson said his budget allowed for him to spend $43 a day on food and lodging, or a little more than $4,000 in total. He allowed for a few extravagances such as an outdoor musical in North Dakota and a three-night stay with the wives on Mackinac Island in Michigan.

Kahler said planning for the project began about two-and-a-half years before starting the trip. They have ridden together a lot over their approximately 35 years of friendship. They are both carpenters and have worked with each other in different ways over the years.

"We thought it was a good match," Kahler said. "We knew we would be compatible for the three months we knew it was going to take to go across country."

Kahler and Robinson each bought a new bicycle for the ride. The bikes are specifically designed for touring; they are made of steel so they are more durable, with lower gears for the hills, and connection points to attach racks and water bottles.

The duo took a couple of shorter bike rides to prepare for the trip. They spent five days biking about 300 miles around Lake Champlain. They had been in the Boys & Girls Club of Brattleboro's annual Going the Distance Bike Ride since its inception but missed this year's, which marked its decade in existence. They still raised more than $3,700 for the club this year and would mention it when asked if they were riding for a charity or cause.

Their route had been created by a national organization called Adventure Cycling, which started under another name in 1976 when the United States was celebrating its bicentennial. Robinson said he had ridden the TransAmerica Trail from Oregon to Virginia back then. He had to pass a course to lead a group.

"It goes through every state that touches Canada and it's more difficult I think," said Robinson. "There's a mental aspect to touring and there's a physical aspect, and I've always thought that bike touring is 75 percent mental and about 25 percent physical. You don't need to be a great athlete to tour across country but you've got to have the will to do it, and the Northern Tier is, mentally, tougher."

Robinson described passing through vibrant communities as well as "ghost towns" on the Northern Tier. With the TransAm, he said, "You feel like you're seeing a lot more nice communities, and the passes, they're a challenge but they're fewer and they're not as steep as on the Northern Tier. So it's a more gentle experience going across country and there's a lot more cyclists riding that."

Robinson also noticed how cell phones have changed things since his last trip. While the devices made planning and communicating more convenient, he saw how many people are distracted by them when there are sights to take in.

There were times when the duo had to deal with a lot of traffic.

"While those days popped up with some regularity, they weren't the norm," Kahler said. "We weren't on busy roads as a rule, just from time to time."

Robinson recalled traffic being "no big deal" when riding cross country in 1976.

"But 43 years later and 100 million more people in the country now, the traffic is just heavier," he said, adding that vehicles are a constant concern for cyclists. "At one point, I was thinking, How many cars have passed us from behind on this trip? And it's like, God, how can you even imagine how many? But it could easily be tens of thousands."

Kahler said they had more fun on the quieter roads. He found hills were longer out west, and shorter and steeper in the middle of the country.

Kahler said some of the most difficult riding "surprisingly" was in Maine. Robinson agreed with that assessment.

"It was very tough," Robinson said. "As a matter of fact, I was beginning to worry I was getting tendonitis in my ankle. Fortunately, our trip ended before I got tendonitis. That was the hardest riding we had."

Robinson reported that he and Kahler each had three flat tires they had to fix on the trip.

The duo took it one day at a time. If they looked at the long haul, Kahler said, it could seem too daunting.

Kahler found it surprising that many of the other cyclists they encountered with touring gear were also in their age group: 69 to 70 years old. Others doing similar trips were just out of high school or in college.

In Montana, Kahler and Robinson were able to ride without gear. While camping, they met a couple who invited them over for dinner. The husband offered to meet them with their supplies after an approximately 3,000-foot climb.

Other acts of kindness came through warmshowers.org, which is described on its website as "a community of bicycle tourists and those who support them." They would get showers, meals, and access sometimes to a washer and dryer. They also would share their stories and save money on meals.

As a rule, if they spent a second night, they would offer to take their hosts out to dinner.

"There's a part of me that feels you're putting them on the spot and I suppose you are, but they all said yes, the several that we did that with," Kahler said. "And I don't think they said yes begrudgingly. I think they were happy to say yes."

Robinson said, "It's a very friendly, welcoming situation to be in, especially after a long day on the road. It might have been raining. You've got someone to put you up for the night."

The duo also stayed with friends they knew in Wisconsin; Lake George, N.Y.; Maine; and Seattle, where Kahler used to live. Kahler estimated that they spent about 40 percent of their time in homes and the rest in campgrounds or parks.

Asked if he would be game to do the trip again, Kahler said he would consider a shorter one.

"Maybe one lasting a week or two or something like that," he said. "You can put your own route together and choose to go from here to here. And I would say to anyone reading this article — if they think, 'Jeez, I could never do that' — it doesn't have to be a cross-country trip. It doesn't have to be a long trip. You don't have to carry your gear."

Kahler said someone might want to try a route that is not so difficult, then plan a slightly longer trip next time.

"You really do take in your surroundings in such a different way from the bicycle, you know, it's much slower," he said. "You got the sights and the sounds. You can stop."

Robinson said he would love to do some more touring but for much shorter durations.

"I'm not needing to top the Northern Tier," he said. "I don't think my wife would want me to do it anyway. It was asking an awful lot of her to have me gone for three months. I said I elevated her to sainthood in agreeing to let me go away for three months and she had to take care of everything at home."

The duo found a lot of conversations got started when their touring gear would be spotted. They would be asked where they started and where is the endpoint. Kahler said everyone wished them safe travels.

Robinson said that was the highlight of his trip, although there were many — including the "physical beauty" and "vast expanse of the plains."

"We met so many wonderful people," he said. "It could just be people on the street. As a touring cyclist, you kind of stick out by the clothes you wear, the helmet on your head, the fact you're on a bicycle, our bicycles had trailers on them. You're like a sore thumb. People notice you all the time."

From the beginning of the trip to the end, Robinson noticed those they encountered would look them in the eye and tell them to have a safe trip.

"It was like someone giving you a hug," he said. "So that's really the highlight of the whole journey for me."

While Kahler got right back on his bike when he got home, Robinson took a two-week break. Both men found the hills to be much less challenging without all the touring gear.